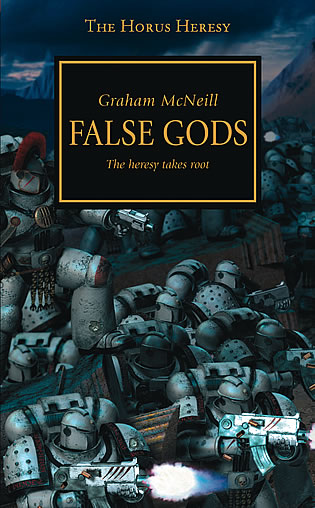 It is a time of legend.

Mighty heroes battle for the right to rule the galaxy. The vast armies of the Emperor of Earth have conquered the galaxy in a Great Crusade – the myriad alien races have been smashed by the Emperor’s elite warriors and wiped from the face of history.

The dawn of a new age of supremacy for humanity beckons.

Gleaming citadels of marble and gold celebrate the many victories of the Emperor. Triumphs are raised on a million worlds to record the epic deeds of his most powerful and deadly warriors.

First and foremost amongst these are the primarchs, superheroic beings who have led the Emperor’s armies of Space Marines in victory after victory. They are unstoppable and magnificent, the pinnacle of the Emperor’s genetic experimentation. The Space Marines are the mightiest human warriors the galaxy has ever known, each capable of besting a hundred normal men or more in combat.

Organised into vast armies of tens of thousands called Legions, the Space Marines and their primarch leaders conquer the galaxy in the name of the Emperor.

Chief amongst the primarchs is Horus, called the Glorious, the Brightest Star, favourite of the Emperor, and like a son unto him. He is the Warmaster, the commander-in-chief of the Emperor’s military might, subjugator of a thousand thousand worlds and conqueror of the galaxy. He is a warrior without peer, a diplomat supreme.

Horus is a star ascendant, but how far can a star rise before it falls?

The Sons of Horus

T
HE
W
ARMASTER
H
ORUS
, Commander of the Sons of Horus Legion

E
ZEKYLE
A
BADDON
, First Captain of the Sons of Horus

M
ALOGHURST
, ‘
THE
T
WISTED
’, Equerry to the Warmaster

A
NGRON
, Primarch of the World Eaters

M
ODERATI
P
RIMUS
C
ASSAR
, One of the senior crew of the
Dies Irae

T
SEPHA
, A cultist of Davin and facilitator for Akshub

P
ETRONELLA
V
IVAR
, Palatina Majoria of House Carpinus – one of the scions of a wealthy noble family of Terra

M
ECHANICUM
A
DEPT
R
EGULUS
, Mechanicum representative to Horus, he commands the Legion’s robots and maintains its fighting machines

I was there the day that Horus fell…

‘It is the folly of men to believe that they are great players on the stage of history, that their actions might affect the grand procession that is the passage of time. It is an insulating conceit a powerful man might clasp tight to his bosom that he might sleep away the night, safe in the knowledge that, but for his presence, the world would not turn, the mountains would crumble and the seas dry up. But if the remembrance of history has taught us anything, it is that, in time, all things will pass. Unnumbered civilisations before ours are naught but dust and bones, and the greatest heroes of their age are forgotten legends. No man lives forever and even as memory fades, so too will any remembrance of him.

‘It is a universal truth and an unavoidable law that cannot be denied, despite the protestations of the vain, the arrogant and the tyrannical.

‘Horus was the exception.’

— Kyril Sindermann,
Preface to the Remembrancers

‘It would take a thousand clichés to describe the Warmaster, each one truer than the last.’

‘Everything degenerates in the hands of men.’

C
YCLOPEAN
M
AGNUS
, R
OGAL
Dorn, Leman Russ: names that rang with history, names that
shaped
history. Her eyes roamed further up the list: Corax, Night Haunter, Angron… and so on through a legacy of heroism and conquest, of worlds reclaimed in the name of the Emperor as part of the ever-expanding Imperium of Man.

It thrilled her just to hear the names in her head.

But greater than any of them was the name at the top of the list.

Lupercal, she heard his soldiers now called him – an affectionate nickname for their beloved commander. It was a name earned in the fires of battle: on Ullanor, on Murder, on Sixty-Three Nineteen, – a world the deluded inhabitants had, in their ignorance, known as Terra – and a thousand other battles she had not yet committed to her mnemonic implants.

The thought that she was so very far from the sprawling family estates of Kairos and would soon set foot on the
Vengeful Spirit
to record living history took her breath away. But she was here to do more than simply record history unfolding; she knew, deep in her soul, that Horus
was
history.

She ran a hand through her long, midnight black hair, swept up in a style considered chic in the Terran court – not that anyone this far out in space would know, allowing her fingernails to trace a path down her smooth, unblemished skin. Her olive skinned features had been carefully moulded by a life of wealth and facial sculpting to be regal and distinguished, with just the fashionable amount of aloofness crafted into the proud sweep of her jawline.

Tall and striking, she sat at her maplewood escritoire, a family heirloom her father proudly boasted had been a gift from the Emperor to his great, great grandmother after the great oath-taking in the Urals. She tapped on her dataslate with a gold tipped mnemo-quill, its reactive nib twitching in response to her excitement. Random words crawled across the softly glowing surface, the quill’s organic stem-crystals picking up the surface thoughts from her frontal lobes.

She smiled and erased the words with a swipe of an elegantly manicured nail, the edge smooth down to the fractal level, and began to write with pronounced, cursive sweeps of the quill.

It is with great heart and a solemn sense of honour that I, Petronella Vivar, Palatina Majoria of House Carpinus do pen these words. For many a long year I have journeyed from Terra, enduring many travails and inconveniences…

Petronella frowned and quickly erased the words she had written, angry at having copied the unnatural affectedness that so infuriated her in the remembrancers’ scripts that had been sent back from the leading edge of the Great Crusade.

Sindermann’s texts in particular irritated her, though of late they had become few and far between. Dion Phraster produced some passable symphonies – nothing that would enjoy more than a day or so of favour in the Terran ballrooms – but pleasing enough; and the landscapes of Keland Roget were certainly vibrant, but possessed a hyperbole of brush stroke that she felt was unwarranted.

Ignace Karkasy had written some passable poems, but they painted a picture of the Crusade she often thought unflattering to such a wondrous undertaking (especially
Blood Through Misunderstanding
) and she often asked herself why the Warmaster allowed him to pen such words. She wondered if perhaps the subtexts of the poetry went over his head, and then laughed at the thought that anything could get past one such as Horus.