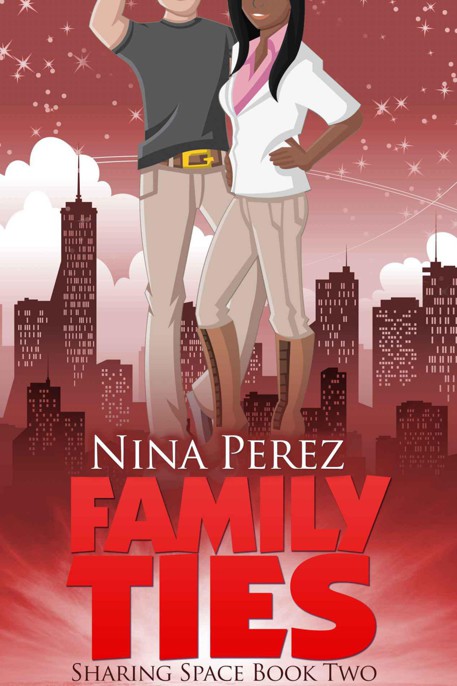 To MJ Heiser for being a supportive friend and editor. She takes good care of my babies.

To Sophie Loney, the best bestie in the world.

To Steven Novak for another great cover.

To my parents and family for always cheering me on.

And to Donny, Kali, and Jack. My three favorite people in the whole world.

Lila jumped out of her chair; face fixed with a triumphant smile, and walked around her desk to hug me.

"Well, we still have to sign her.” I replied.

“Oh, we will.” Lila returned to her seat. “Set up another team meeting. I want to run your idea by everyone first, but I’m sure they’ll be just as excited.”

We’d landed the account of a major cosmetics company and were fixed with the task of coming up with a social media campaign for their new
Soft and Moist
lipsticks. The team Lila had gathered for the account weren’t creating concepts that worked; they were all too sexy.  I had suggested using a popular young actress who had just left a soap opera to make movies.  She had the clean image the cosmetic company wanted, she wasn’t in every magazine so there was no risk of over exposure, and she’d yet to be caught by TMZ doing anything scandalous.

I entered my own office feeling proud that Lila liked my idea and hoped it would be my opportunity to do more in the company.  I was cleaning off my desk for the day when Myra knocked and entered.

I’d been so elated over my meeting with Lila that I’d totally forgotten Myra was coming over for dinner. “Sure.  What do you feel like, beef or chicken?”

“You know I love me some beef, girl,” Myra replied with a wink. “I’ll be there by six-thirty.  Should I bring anything?”

Myra left and the nervousness I felt when she’d first accepted my dinner invitation earlier that week returned.  Though things were pretty much back to normal between us, she still hadn’t met Patrick and was constantly asking me questions on how my new living arrangement was going.  It was almost as if she were waiting for things to turn sour. I suspected that coming over for dinner was more about sizing up Patrick than spending time with me.

When I entered the apartment that evening I wasn’t surprised to find it incredibly clean.  Ever since the night my mother called, Patrick and I had gotten into a smooth rhythm and even worked out a cleaning schedule, taking turns handling the major duties. My cell phone vibrated in my purse, alerting me to a text message. It was from Crystal.

Still picking up Bri this weekend?

I wrote back:
Of course! I already got our tickets to the exhibit.

I kicked off my shoes and, since there was no sign of Patrick, I felt free to turn up my Robin Thicke CD while I prepared dinner.  At six forty-five the intercom buzzed.

“Who is it?” I asked as I pressed the button marked
talk
.

I pressed the buzzer then waited at the apartment door as she made her way to the second floor. Girlfriend looked good in a rust-colored suede pantsuit that signaled dinner at my place wasn’t her only plan for the night.

“Check you out,” Myra said as she handed me a bottle of red wine.

“Well, I was scared of being robbed.”

We laughed and I felt silly for doubting the evening would be anything but fun.  We’d had our moments, but Myra was my closest friend and we’d seen each other through a lot.  If she was no longer tripping over Patrick moving in, I wouldn’t hold a grudge over the things she’d said. We were in the living room eating homemade spinach dip and waiting for our steaks to broil when Patrick came in from the gym.

“Hey you,” I called out as he entered the apartment. I made the introductions and noticed how Myra gave Patrick the once over.

He wore black sweatpants and a white tee shirt under a matching black hooded jacket, which he removed before shaking Myra’s hand. His muscles flexed as he extended his arm and I felt my stomach tighten. I knew what it felt like to be held in those arms.

It had been a few weeks since our misunderstanding over the phone call and we still hadn’t discussed what had happened after: Patrick and I almost kissed in the kitchen. At least, that’s what I
think
happened. The moment his hand had touched my face, goose bumps appeared along my arms. It wasn’t just the glasses of wine that had me weak in the knees. Placing my hands on Patrick’s chest was instinctive, a way to steady myself. Instead, I’d felt even more lightheaded as his heartbeat hammered against my hand. He leaned closer and, before I could stop myself, I was raising up on the tips of my toes to meet him halfway.

The kiss never came. Patrick took a step back, mumbled something about changing his shirt and calling it a night, and left me standing in the kitchen feeling flustered and embarrassed.

Myra and Patrick were looking at me oddly. I’d obviously missed something.

“I said you missed a really good class tonight. Ling is a much better instructor than the guy who was teaching it last week.”

I answered, “Patrick has me taking a yoga class twice a week.”

Myra made a face.  “Yoga?  I didn’t know you were interested in that.”

“I didn’t either, but I mentioned to Patrick that I haven’t had a real workout routine since college and I really missed it, especially lately when I’ve been so stressed out.”

Patrick cut in, “So I asked her what she would think if I could introduce her to something that would relax her mind and body as well keep her in shape.”

Patrick and I laughed.

“Anyway, it was fun. You weren’t there but Taye Diggs was,” Patrick said as he walked out of the living room.

“You’re lying,” I called after him.

Myra and I were settling in at the dining table, preparing to eat, when Patrick came out of the bathroom looking freshly showered and very handsome in a pair of dark blue jeans and a gray pullover.

“Patrick, why don’t you join us?  There’s another steak on the stove and there’s plenty of salad here.”  I gestured towards the green salad sitting at the center of the table.

“Besides”, I continued, “I owe you one.  You made that delicious spaghetti the other night.”

“You’re right,” he said, taking a seat at the table. “I meant that you owe me. Not sure how delicious the spaghetti was.”

He winked at me and I blushed. To keep from fanning myself with a napkin I put a generous helping of salad on a plate and handed it to Myra. I think I caught the tail end of an eye roll when she took the dish.

We ate in silence for a few moments before I decided to break the ice with my big news at work.

“Congratulations! This is what you’ve been waiting for, right?” Patrick asked.

“Hopefully it is.  Not only do I think Kelly Kennedy would be perfect for the campaign, but I have a ton of ideas on how we can utilize sites like YouTube and Pinterest for very low cost.”

Myra poured another glass of wine and said, “Well, just be careful.  You know how they are.”

I closed my eyes briefly and prayed that Myra would not go on one of her rants in front of Patrick. I wanted to enjoy my good news without drama.

“People at work.” I answered quickly. I didn’t want Myra to get specific.

Myra turned from Patrick to look at me, squinting her eyes. “Yeah, they are not all trustworthy.  Be careful that you don’t find your ideas being used with someone else getting credit for them.”

“From what you’ve told me of Lila, she seems pretty fair, like she has your best interests in mind.” Patrick said, placing a forkful of salad in his mouth.

“Yes, but I work with these people too, Patrick.
I
know.”

Patrick didn’t push. I looked at Myra, trying to catch her eye, but it seemed dipping a piece of arugula in dressing required every ounce of her attention.

“Well, we’re having a team meeting to run it by everyone.  Then we have to get some boards together to show the people at Raven Cosmetics.”

“Wait.” Patrick put down his fork. “Did you say Kelly Kennedy?”

“From
Shining Moments
?  That Kelly Kennedy?”

I smiled and took a sip of wine. “Formerly of
Shining Moments,
and I didn’t know you watched soap operas.”

Myra and I both stopped eating.

Patrick looked at us both like it was no big deal.  “Yeah, we were in some acting classes together a few years ago.  When she got the gig on
Shining Moments
she asked if I would train with her a few times a week to keep her in shape. Anyway, she’s from Long Island and we were a year apart in high school.”

“You want me to talk to her for you?”

“You’re not asking, I’m offering. Putting in a good word can’t hurt, right?” Patrick said as he stood with his empty plate and started to clear the table.  “That was delicious.”

“Thanks, guys. Who wants coffee?”

“I can’t.  I’m meeting my sister and her boyfriend.”

“Charlotte?  The one with the weird boyfriend?”

“Yeah, I promised my Mom that I’d get Charlotte to come home for dinner on Sunday.”

Patrick left Myra and me alone and I tried to convince her to stay for coffee as well.  She declined, stating that she was meeting a guy she met while jogging in Central Park.

“Myra, be careful.  That sounds dangerous.”

“Please.  I’m meeting him in a very public place.”

“I know, but I meant going out with a guy you met in the park.”

“How is that any worse than letting a complete stranger move in with you?”

I sucked my teeth. “Myra, please don’t start.  I thought we had a good time.”

Beneath the Scars by Melanie Moreland
Blood on the Water by Connor, Alex
86 Avenue du Goulet (A Samantha Jamison Mystery Volume 3) by Edelheit, Peggy A.
Solitary Man by Carly Phillips
My Mother Wore a Yellow Dress by Christina McKenna
The Brilliant Light of Amber Sunrise by Matthew Crow
Thorns of Decision (Dusk Gate Chronicles) by Puttroff, Breeana
05 - Mistletoe and Murder by Evelyn James
Loving Time by Leslie Glass
Once Every Never by Lesley Livingston