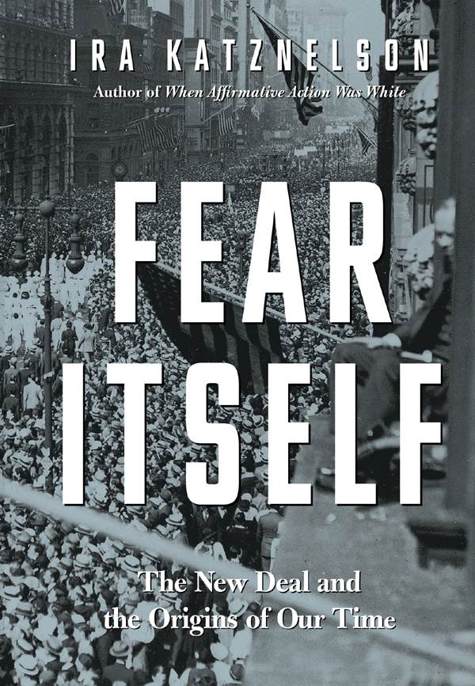 The New Deal
AND THE
Origins of Our Time

For Deborah, and her

I live in an age of fear.

E.B. White, letter to the

PART I FIGHT AGAINST FEAR

1. A Journey without Maps

4. American with a Difference

L
ESS THAN A YEAR
after Franklin Roosevelt assumed the presidency, Charles Beard, the nation’s leading historian, reported how, “with astounding profusion, the presses are pouring out books, pamphlets, and articles on the New Deal.”
1
Ever since Beard’s observation, copious attention has been paid to how the Roosevelt and Truman administrations brought energy to despair.
2
Indeed, we possess hundreds of thematic histories, countless studies of public affairs, and abundant biographies of key persons during this time of great historical density. Scholars and journalists have exhaustively analyzed the epoch’s increasingly powerful bureaucracy, the Supreme Court as it evolved, the thicket of policies concerning economic regulation and social welfare, and the country’s growing military capacity and global leadership. Their resonant pages emphasize the character, the actions, and prose of its two presidents—one mesmerizing, larger than life, the other plain but not simple. They are crowded with other grand characters we have come to know well, including the grandiloquent union leader, John L. Lewis; the lanky congressman and senator from Texas, Lyndon Baines Johnson; the erudite African-American scholar and activist, W. E. B. Du Bois; and a colorful parade of spies and spy catchers, radio preachers and generals, atomic scientists and war-crimes lawyers.

With the protean twenty-year epoch of Democratic Party rule long understood as “a watershed . . . that separates politics past from politics present and future,” why present another portrait of the New Deal? Is there anything new to be said about this “defining time—like the Revolution and the establishment of the new nation—that set . . . the terms of American politics and government for generations to come”?
3

D
RAWN TO
the mystery and beauty of Venice, Henry James set numerous sketches, stories, and novels in that city, “where the mere use of one’s eyes . . . is happiness enough.”
4
Writing in 1882 as “a brooding tourist,” he cautioned that “an originality of attitude is completely impossible.” After all, the “golden” city had been “painted and described many thousands of times,” and there was “nothing new to be said.” With “as little mystery about the Grand Canal as about our local thoroughfare, and the name of St. Mark . . . as familiar as the postman’s ring,” James conceded that there was “a certain impudence in pretending to add anything.”
5

James defended his depiction. “It is not forbidden . . . to speak of familiar things” or present “a fillip to . . . memory” when a writer “is himself in love with his theme.”
6
One reason for writing is just such veneration. The New Deal—the designation I use for the full period of Democratic Party rule that begins with FDR’s election in 1932 and closes with Dwight Eisenhower’s two decades later—reconsidered and rebuilt the country’s long-established political order. In so doing, it engaged in a contest with the dictatorships, of both the Right and the Left, about the validity of liberal democracy. Bleak uncertainty marked most of these years. By successfully defining and securing liberal democracy, the New Deal offers the past century’s most striking example of how a democracy grappled with fear-generating crises.

A gloom of incomparable force was setting in when the New Deal began. In July 1932, Benito Mussolini celebrated, if prematurely, how “the liberal state is destined to perish.” Reporting how “worn out” constitutional democracies had been “deserted by the peoples who feel [it will] lead the world to ruin,” he boasted, in prose ghostwritten by the philosopher Giovanni Gentile, that “all the political experiments of our day are antiliberal.”
7
The New Deal’s rearrangement of values and institutions, and its support for the Western liberal political tradition, answered this challenge. Its battles were fought on many fronts, from the effort to revive capitalism to the struggle to incorporate the working class and contain the dangerous features of a mass society. Its international objectives were no less weighty, from the mission to defeat Nazi Germany, Fascist Italy, and militarist Japan to the desire to keep Soviet Communism in check, while maintaining internal solidarity and security in the process. These achievements are especially impressive when one realizes that they had to be accomplished virtually all at once, like a galloping Thoroughbred carrying not one rider but four.

From the early days of the New Deal, the democratic world watched with great curiosity. Many were convinced that there was a nearly perfect coincidence between the particular causes of the United States and the universal causes of humanity.
8
Five months to the day after FDR’s inauguration, Jawaharlal Nehru saluted the president for coming to democracy’s rescue from a New Delhi British prison cell.
9
In a December 1933 letter sent to Roosevelt, John Maynard Keynes affirmed, “You have made yourself the trustee for those in every country who seek to mend the evils of our condition by reasoned experiment within the framework of the existing social system.”
10
“Our generation,” the German novelist Stefan Zweig, who would later commit suicide in exile in Brazil, observed, “grew up in the ardent, inflexible faith in the mission of Europe. . . . Though Europe has now proved so shamefully false to its most sacred mission, has destroyed itself in wanton self-laceration, though individual countries have made of moral irresponsibility a doctrine and of brutality a creed, we shall not be false to our faith. We shall place our trust in the youth of younger countries—America above all; it is for them to save the freedom of the mind, the humanity of the heart, for the world.”
11

This trust was not misplaced. The New Deal ultimately proved Mussolini wrong. The Gods of liberalism did not die. The dictatorships’ vortex of violence and brutality was not only met but also trumped by a model of constitutionalism and law. Of the New Deal’s many achievements, none was more important than the demonstration that liberal democracy, a political system with a legislature at its heart, could govern effectively in the face of great danger.
12
In a decisive break with the old, the New Deal intentionally crafted not just a new set of policies but also new forms of institutional meaning, language, and possibility for a model that had been invented 150 years before.
13
By buttressing the country’s constitutional order despite the many frustrations inherent in its separation of powers and federal organization, the New Deal demonstrated that not all attempts at nonrevolutionary reform need fail.
14

These achievements were widely recognized, almost immediately so. The editors of
The New Republic
reviewed the New Deal’s panoply of policies in May 1940. They persuasively judged the first two Roosevelt administrations “to have done far more for the general welfare of the country and its citizens than any administration in the previous history of the nation.”
15
That year, a twenty-nine-year-old graduate student by the name of Hubert Humphrey, completing a master’s degree in political science at Louisiana State University, noted how much had been accomplished by “refusing to be bound by time-worn ideas as to the function of the state.”
16
Likewise, the historian E. H. Carr observed the same year that the New Deal’s program of reform had created a “vital democracy” as a global model.
17
A decade later, the best-selling author John Gunther praised the New Deal for accomplishing “one of the few gradualist revolutions in history,” with “profound emotional results in lifting up the mental climate of most of the nation, stirring citizens to new hope and faith.”
18
Looking backward, Oxford’s Isaiah Berlin remarked in 1955 how “Mr. Roosevelt’s example strengthened democracy everywhere—that is to say, the view that the promotion of social justice and individual liberty does not necessarily mean the end of all efficient government.”
19

By transcending the limits of traditional liberalism, conservatism, and orthodox socialism to take effective decisions on democracy’s behalf, the New Deal designed a template of options and possibilities with wide appeal beyond the United States. Marked by the “brilliant invocation of democratic resources against the perils of depression and war,”
20
the federal government reinvigorated constitutional democracy by countering economic and political cruelty. Prosperous and effectively armed by the end of this epoch, the country became democracy’s global leader. It is inconceivable that liberal democracy today would enjoy legitimacy and prestige without the actions taken by the “long Roosevelt Administration”
21
that effectively responded to the era’s naysayers, who claimed that liberal democracies were too pusillanimous to challenge the treacherous dictatorships, too effete to mobilize their citizens, and too enthralled with free markets to manage a modern economy successfully.

The New Deal’s sustained defense of liberal democracy surely deserves at least as much admiration as Henry James expressed for golden Venice. Yet with so many facts familiar, archives exhausted, and competing interpretations long established, high regard cannot justify this book, certainly not a book of this length. The question lingers. Why paint, yet again, the most painted political landscape of twentieth-century America?

A
WISE COMMENTATOR
once wrote of
King Lear
that “the sheer greatness of this work grossly magnifies its defects . . . that stand between certain scenes and their possible perfection.”
22
Esteem for the New Deal paradoxically should draw attention to its most profound imperfections; it should motivate efforts to discern the causes of its defects. Seeking to understand not only the New Deal’s manifest successes but also its ironies and limitations, I explore the complicated and sometimes unprincipled relationships between democracy and dictatorship, and between democracy and racism. Eschewing the traditional division separating foreign from domestic affairs, the book examines the fringes of liberal civilization and the ways in which illiberal political orders, both within and outside the United States, influenced key New Deal decisions.

The New Deal inhabited a space filled with tension. It unfolded at a moment of profound crisis. In their texts, the Greeks used the term in law, theology, and medicine to designate how a crisis imposes “choices between stark alternatives—right or wrong, salvation or damnation, life or death.”
23
As the great economic historian Alexander Gerschenkron explained during World War II, “should Germany win, there will be no reconstruction in which the peoples of the world can take an active part; there will be nothing but the construction of pyramids for the new pharaohs.”
24
But, in the 1930s and 1940s, the capacity for unblemished choices had disappeared. The Manichean world of right and wrong, where alternatives are nonnegotiable—a philosophy that derived from the ancient world—could no longer be sustained. Untainted partners no longer existed. No decisions could be made that were not influenced by practical and moral compromise.

At the time, it was not at all clear that America’s constitutional state possessed the means to meet the era’s challenges or make these judgments effectively. Writing in 1940, even before the conflagration spread beyond the borders of Europe, a leading political scientist, Pendleton Herring of Harvard, put the challenge this way:

We face a world where discipline, organization, and the concentration of authority are placed before freedom for the individual and restraints on government. Internal economic problems likewise call for a greater degree of continuity and consistency in public policy. Yet our government was originally designed for no such complex necessities. What can we do with what we have? Can our government meet the challenge of totalitarianism and remain democratic? Is the separation of powers between the legislative and executive branches compatible with the need for authority? In seeking firm leadership do we open ourselves to the danger of dictatorship?
25

Dissidence by Jamie Canosa
Educating Jane Porter by Dominique Adair
Brief Lives by Anita Brookner
Spring Will Come by Ginny Dye
Ugly Girls: A Novel by Lindsay Hunter
Maternal Harbor by Marie F. Martin
Martin and John by Dale Peck
The Other Side of the World by Jay Neugeboren
My Life Next Door by Huntley Fitzpatrick
Susan Johnson by Outlaw (Carre)