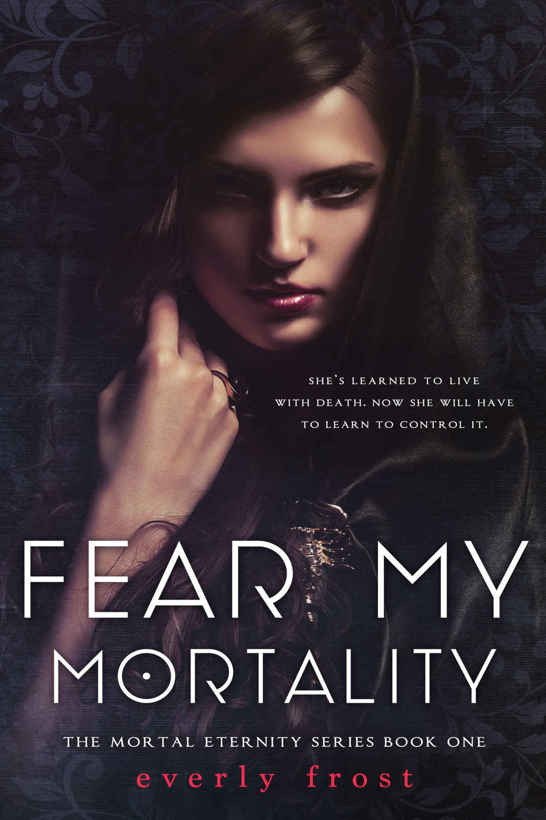 Fear My Mortality by Everly Frost

Praise for FEAR MY MORTALITY

“
Fear My Mortality
is a wonderful debut novel, with its non-stop action, unique fantasy twist, and a touch of romance. Everly Frost is a name to watch, and I can’t wait to get my hands on her next book.”

“Everly Frost has crafted a superb story in
Fear My Mortality
. From the first page I was hooked, right up until the last page when I immediately wished I had the second book.

Ava is a character I could read about every day. She’s strong but vulnerable, and when her entire world is turned around she manages to keep moving forward and battling for her freedoms. She’s determined and smart and the type of heroine to admire. She’s not perfect, she’s real and genuine and full of heart.

Michael is ... everything. I love him and would like one of my own to keep. Just one of course, I won’t be greedy.

The storyline is fast paced, filled with action and intrigue. I found myself flipping pages so fast to try and find out what was going to happen next to Ava. The writing is beautiful, descriptive and poetic at times. I could picture everything so clearly, as if I was there.

Five out of five stunning stars for this debut novel.”

But Eve turned from the serpent

and did not eat of the fruit.

And for her obedience,

she was allowed to reach out her hand,

take from the tree of life and eat,

I never could watch anyone die.

Tricycle wheels flipped through the air. Brakes shrieked and metal crunched. The kid’s trike rattled all the way across the road and hit my foot. I froze at the curb in front of my house, school bag sliding off my shoulder, vision filled with the spinning wheels. I told myself to walk away, pretend I hadn’t heard the smash or seen the boy go under the vehicle. I should shrug it off like I was supposed to.

I should ignore the impulse to help.

I bounded around the broken bike and sprinted to the car in the middle of the road. A little arm extended from underneath the front fender, palm up, motionless. Biting my lip, I sank to my heels, wishing his fingers would twitch, fighting the tears that welled behind my eyes.

The silence was heavy after the squeal and crash. I hovered, not sure if I should pull him out. I hated my brother for leaving me behind. If Josh had driven me to dance class like he was supposed to, I wouldn’t be here now, staring at first death and not knowing what to do. I’d be going about my day like normal. No, I reminded myself. Today was not an ordinary day. Today was Implosion.

The driver emerged from the car with annoyance on her face. I flinched as she slammed the car door. Another woman ran from a nearby house, screaming into a phone. She raced to the driver and gave her a shove. “That’s my son! I’m calling the Hazard Police. You’d better be insured!”

The driver threw up her hands and backed off, slumping against the side of her car, clicking her fingernails together, and tapping her heels against the pavement.

I knelt down to the boy as his mother continued to yell into the phone. She paced up and down the road, her voice shrill. “How long will it take to get a recovery dome here? What—you’ve got to be kidding me. I’m already late for work.”

Wisps of his blond hair touched the side of the wheel like yellow cotton candy, all floating and soft. I wondered if his soul floated there too, inches above the hot road, waiting to get back to his body. I was glad I couldn’t see the rest of his head.

Before I touched him, something zipped past my shoulder.

The drone circled up and back, swinging close to my ear. Shaped like a metal cross no bigger than my hand, it skimmed the air in front of the car. Beneath the hum of its four miniature rotor blades came the chatter of shutters. It was taking shots of the damage: the boy’s hand, the wheel, a piece of tricycle jammed under there with him. Assessing the situation and relaying the information twenty miles west to the nearest Hazard Police station.

The information drone flitted from spot to spot, whirring around the car straight toward the driver, hovering and clicking, transmitting her image back to the police. The kid’s mother was next before the drone flew to me. A pinprick of light struck my eyes, and I stopped still, waiting for it to take the shot and move on, but the clicking stopped.

I frowned as the mechanical chattering died. Instead of taking my picture, the drone floated, paused for the first time. I stared back at it, waiting, a feeling of unease spreading through my chest.

Someone grabbed my arm.

My elderly neighbor, Mrs. Hubert, wrenched me to my feet, a pair of pruning shears wavering in her other hand. The camera clicked behind me—just once—and I imagined the blur of my body captured in the image. Before I drew breath, Mrs. Hubert’s strong grip propelled me several feet from the car. Her long braid—a sign of her age—slapped against her thigh as she strode away from the accident, taking me with her.

“Come away, Ava. You don’t need to get caught up in that.” She flicked her head in the direction of the scowling driver who looked as if she wanted to strangle someone. I guessed she didn’t have insurance, after all.

“But, he’s still under there … ” I threw a confused look at the boy’s mother. She still hadn’t checked him.

“Everyone deals with first death differently. You need to get used to it if you want to get through Implosion tonight.”

Implosion. When I get to see the color of my own blood.

She tugged on my arm again. “Besides, the Hazard Police will be here soon. They’ll take care of him.”

Behind us, the info drone returned to the crash as Mrs. Hubert urged me further away from the accident. I picked up my bag and tried to forget about the child. I guessed it would be at least half an hour before he regenerated and was fully conscious again—faster if the Hazards brought a recovery dome.

Discovery at Nerwolix by C.G. Coppola
The Translation of Father Torturo by Connell, Brendan
Twillyweed by Mary Anne Kelly
Good Karma by Donya Lynne
Seven Tears into the Sea by Terri Farley
Lori Connelly by The Outlaw of Cedar Ridge
Betrayed Countess (Books We Love Historical Romance) by Lewis, Diane Scott
Promises 2 by A.E. Via
Gregory, Lisa by Bonds of Love
Blood Cult by Page, Edwin