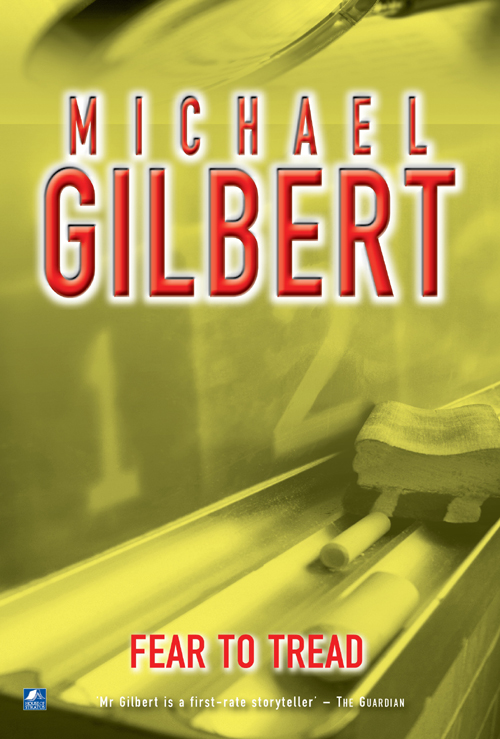 HRF Keating stated that
‘Smallbone Deceased’
was amongst the 100 best crime and mystery books ever published.
“The plot,”
wrote Keating, “
is in every way as good as those of Agatha Christie at her best: as neatly dovetailed, as inherently complex yet retaining a decent credibility, and as full of cunningly-suggested red herrings.”
It featured Chief Inspector Hazlerigg, who went on to appear in later novels and short stories, and another series was built around Patrick Petrella, a London based police constable (later promoted) who was fluent in four languages and had a love for both poetry and fine wine. Other memorable characters around which Gilbert built stories included Calder and Behrens. They are elderly but quite amiable agents, who are nonetheless ruthless and prepared to take on tasks too much at the dirty end of the business for their younger colleagues. They are brought out of retirement periodically upon receiving a bank statement containing a code.

Much of Michael Gilbert’s writing was done on the train as he travelled from home to his office in London:
“I always take a latish train to work,” he explained in 1980, “and, of course, I go first class. I have no trouble in writing because I prepare a thorough synopsis beforehand.”.
After retirement from the law, however, he nevertheless continued and also reviewed for
‘The Daily Telegraph’
, as well as editing
‘The Oxford Book of Legal Anecdotes’
.

“It may also be true that there have been changes for the worse in the national attitude to wrong-doing and that a man who steals does not incur the same measure of public reprobation which he would have done in the past . . .”

To the Chief Constables Association.

1
SOUTH OF THE RIVER. AN UNCALCULATED INSPIRATION

When Wilfred Wetherall learned that the boys called him “Wellington” Wetherall he was not displeased. He was an admirer of the Duke, and he had no doubt that it was his references to this hero in the course of his history lessons that had planted the idea. A headmaster had to have a nickname. It could have been a good deal worse.

There were physical resemblances, too, in the bony structure of his face, the jut of his nose, the spare frame and forward bending carriage. It finished there. Nobody, not even Wetherall himself, imagined that he had the Wellingtonian character, useful though it would have been in the daily difficulties which beset the headmaster of an understaffed, over-populated secondary school for boys in the south-east of London.

The room in which he was sitting did not much resemble the traditional headmaster’s study. It was almost without adornment. The walls were painted (as were the walls throughout the school), the bottom half in pastel green, the top half in primrose, with a horizontal dividing band of dark green. These were the colours which the consultant psychologist to the School Planning Committee, had stated to be most conducive to study and relaxation. After six years’ practice, Mr. Wetherall found himself able to ignore their message. The floor was covered with dark linoleum. The furniture and fittings were those of a managing director who did not believe in frills.

The modern, iron-framed windows looked bleakly north and east; but there was compensation for this in the skyline of distant masts and cranes where the river swung south, into Lime-house Reach.

Mr. Wetherall replaced on the table a letter he had been reading, and sighed. It was a thing he often found himself doing. The letter was from a Mr. Turvey who considered (with an optimism which, in Mr. Wetherall’s view, bordered on lunacy) that his son might have a chance of a university scholarship.

They were swing doors which, in the first innocent youth of his associations with the school board, he had managed to get installed to cut off the end of the passage and so afford a little privacy to his study and the administration office on the other side of the corridor.

Five deliberate steps, and a knock.

“Not again? We had him last week.”

“I can’t find it in me to blame him,” said Mr. Wetherall. “I have never been able to see the faintest glimmerings of sense in it myself.”

“It’s in the Higher Board Syllabus,” said Mr. Croke, rather stiffly.

“Oh, quite so, quite so. Why does Barlow’s father object to it?”

“He says that calculus leads to the splitting of the atom.”

“I see. How unfortunate. He’s an ardent pacifist, too, isn’t he?”

“Why not tell him that as the atom has been split once already it is most unlikely to be split again in our lifetime. Then if that doesn’t work I’ll have a word with him.”

“It would be useless, I suppose, trying to persuade him that the differential calculus has no connection whatever with nuclear physics?”

“Quite hopeless. You remember what he was like about Guy Fawkes.”

Mr. Wetherall resumed his contemplation of the skyline. There was something romantic, he thought, about masts along a tideway.

Miss Donovan came in from the administration office across the passage. It should perhaps be made clear that the administration office was an even smaller room than Mr. Wetherall’s study and had been originally designed – the matter was uncertain – either as a very small extra staff-room or a very large cloak-room. Miss Donovan was simply Peggy; who was the sister of Sammy and of Patsy Donovan, and who Mr. Wetherall had known, on and off, since she was a slum child of five. She was now seventeen and looked neat, competent and twenty.

“The figures come about right with a little cooking”

“Adjustment. But now they want them showed – shown, I mean – in two separate lots. ‘Milk served’ and ‘Milk drunk’.”

“What the devil,” said Mr. Wetherall, “do they think we do with it? Throw it at each other.”

“Show the totals as the same in both headings. If they don’t like it, it’s up to them to object. If they object perhaps we shall see what they’re getting at.”

How would the Duke of Wellington have dealt with this?

“There’s the boxing lists. I’m just going to put them up.”

“I’d like to see them. Schools Area Finals. That’s tomorrow afternoon, isn’t it. Where’s it to be this time?”

“That’s that rather dim place north of the Elephant, isn’t it?” Mr. Wetherall made another note on his desk pad. “Is Sammy still in?”

“He surely is,” said Miss Donovan. “Seven and under. He had to sweat off four ounces to make the weight.”

“He ought to try standing on his head,” said Mr. Wetherall.

“Who—oh, Mrs. Ambler. How are you? Your husband—I’m sorry to hear that. Laryngitis? He does seem to have bad luck, doesn’t he? No, of course he can’t turn up if he’s feeling bad. I’ll manage somehow.”

“Though why,” he added, having rung off, “these things always happen to Mr. Ambler on Tuesday morning is more than I can make out. I suppose I’ll have to take his class myself. I really couldn’t know less about it.”

He became aware that Miss Donovan was still with him. “Is there anything else, Peggy?”

If Then by Matthew de Abaitua
Over the Rainbow - Book One - 'The Gathering Place' by Robert Vaughan
The Girl with the Wrong Name by Barnabas Miller
Deceive 2 (Book 2 of the Deceive series) by Karessa Mann
Eden by David Holley
The Frozen Beginning (Elemental Diamond Book 1) by Daphne Robynson
Love Triangle: Three Sides to the Story by Brenda Barrett
These Unquiet Bones by Dean Harrison
Finding Davey by Jonathan Gash
The Firehills by Steve Alten