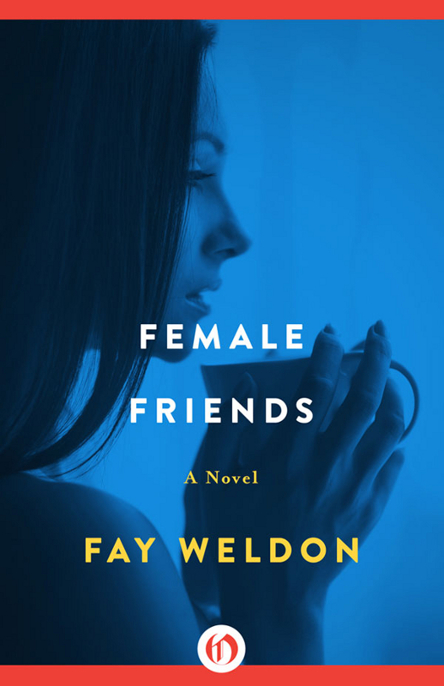 A Biography of Fay Weldon

U
NDERSTAND, AND FORGIVE. IT
is what my mother taught me to do, poor patient gentle Christian soul, and the discipline she herself practised, and the reason she died in poverty, alone and neglected. The soles of her poor slippers, which I took out from under the bed and threw away so as not to shame her in front of the undertaker, were quite worn through by dutiful shuffling. Flip-flop. Slipper-slop. Drifting and dusting a life away.

There is a birth certificate in Somerset House—where all our lives and deaths are listed, and all our marriages and our divorces too—which describes me as Evans, Chloe, born to Evans, Gwyneth,
née
Jones, and Evans, David, housepainter, of 10 Albert Villas, Caledonian Road, London, N1, on February 20th, 1930. Evans, Chloe, female. There is as yet, no death certificate there for me, though looking through the files which now crowd those once seemingly endless Georgian rooms, I shocked myself by half expecting to find it there.

Sooner or later, of course, that certificate will be added.

Understand, and forgive, my mother said, and the effort has quite exhausted me. I could do with some anger to energize me, and bring me back to life again. But where can I find that anger? Who is to help me? My friends? I have been understanding and forgiving my friends, my female friends, for as long as I can remember.

Marjorie, Grace and me.

Such were Chloe’s thoughts, before she slept.

‘T
HERE IS NO POINT
in raking up the past,’ Chloe’s husband Oliver says to her the next morning, as she sits on the edge of his bed and watches him pour coffee from a French pottery jug. This is the day Chloe’s life is to change—in the way that the lives of calm people do change, through some alteration of attitude rather than of conduct. To Chloe, it seems an ordinary enough morning, except that she woke with a feeling of cheerfulness, conscious of the notion that she was finally to be allowed out of mourning for her mother’s death; and that now, when Oliver says that there is no point in raking up the past, she quite violently disagrees with him.

Oliver wears no pyjamas. He is a slight, muscular, hairy man and the hairs on his chest are turning grey. Once he sat up in bed against brave white sheets, shiny black body hairs lying smooth against an olive skin, and thick dark head hair springing up in tight curls from his temples, stimulated, Chloe used to think, by the passion of his opinions and the fury of his dislikes.

Now Oliver props himself against brown easy-care Terylene and cotton pillow-slips, and his grey chest gives him a dusty and defeated look, and even his furies have mellowed, and the hair on his head, now sparse, falls downward in a perfectly ordinary way. His family do not notice the change in him. They imagine he is still king in the outside world, as he is in his own territory; but in fact he abdicated from that empire long ago. He rules at home and nowhere else.

Oliver has breakfast brought to him on a tray. He does not eat breakfast with his family. His nerves shrink from noise and good-humour first thing in the morning. When the thoughts and feelings of the night are still with him, the shriekings and posturings of the children—so many of them not his own—seem like some horrific charade especially set up to mock him.

So while Françoise prepares the children’s breakfast, it is Chloe’s custom to take Oliver his tray. After breakfast he will go to his study to write, or try to write, his novel.

‘No,’ agrees Chloe, lying in her teeth, ‘there is no point in raking up the past.’

He is not to be placated even by instant agreement.

‘Then why,’ he asks, ‘do you suggest I have nightmares because of something which happened to me in the past? It’s much more likely to be Françoise’s dinners. She will cook with butter. Instead of offering me psychological platitudes, why not try getting her to cook in oil?’

‘Françoise comes from Normandy,’ Chloe says. ‘Not the South. The butter habit is very deep.’

‘You don’t think she’s trying to kill me off with cholesterol?’ He is half joking, half serious. The nightmares have not yet fully retreated.

‘If she wanted to kill anyone,’ says Chloe, ‘surely it would be me.’

But Oliver is not sure. There is a coldness in Françoise’s eyes, as she lies beneath him, which belies the obliging languor of her limbs and the sweet moanings of her breath. He says as much to Chloe, but this time Chloe does not reply at all.

‘You’re not in a mood, I hope,’ says Oliver, meaning that he himself trembles on the verge of one.

‘No,’ says Chloe, kindly. She pulls the blind high and looks out across the garden. It is March. The winter weather has broken: the sun shines on the green tips of the daffodils, just beginning to show through the black earth. Beyond the green wall of the yew trees she can see the copper spire of the village church, brilliantly tipped with green verdigris. She is elated.

But now the sun is shining into Oliver’s eyes. He protests, and Chloe lowers the blind again to save him discomfort, but not before she has seen, on the blank pillow next to Oliver’s, a long dark hair, Françoise’s. Chloe removes the hair, and drops it in the wastepaper basket. Oliver does not like untidiness.

‘I’m sorry if I was bad-tempered,’ says Oliver. ‘If you mind about Françoise, you know you only have to say.’

‘Of course I don’t mind,’ says Chloe, and as far as she can tell she doesn’t.

But something has changed in her. Yes it has. Listen to what she is saying.

‘I think I shall go up to London today,’ says Chloe, who hates cities, crowds and cars.

She has to think before she can reply.

‘To see Marjorie and Grace, I suppose.’

‘I am very well aware of that. Why do you choose such odd friends?’

‘One doesn’t choose friends. One acquires them. They are as much duty as pleasure.’

‘How do you know they’ll be free to see you?’ he goes on. ‘Other people won’t just drop everything because you happen to remember they exist. You’re very egocentric.’

‘I’ll have to take that chance.’

‘The fare is monstrous,’ Oliver says. ‘And who will look after the children?’

‘You mustn’t impose on Françoise. Her function is to cook and clean and run the home. It does not include childcare.’

He waits for his wife to say what else it does not include, but Chloe merely says, mildly,

‘The children are old enough to look after themselves.’

And so they are.

A
T HALF PAST NINE
Chloe suffers a spasm of fear at the prospect of going to London, and annoying everyone, and by five past ten, with the assistance of some inner fairy godmother, finally stirring from sleep, has regained her courage. She telephones.

Inigo, Imogen, Kevin, Kestrel and Stanhope are out on the lawn, marking up a badminton court for the season’s playing. Chloe’s fleshly children are the youngest and eldest. Inigo is eighteen, Imogen is eight. Chloe’s spiritual children, Kevin, Kestrel and Stanhope, come in between. Their cheerful, easy profanity drifts across the garden as Chloe tries to get a line through to London, and once in London to the BBC, and once at the BBC, through a succession of receptionists and secretaries, to Marjorie.

Who’d have believed it, thinks Chloe? That these children can use the words so lightly, which once were hurled, with such malignant ferocity, across their cradles. Bitch and bastard, Christ and cunt.

Although Chloe is fleshly mother only to Imogen and Inigo, all the children, she likes to feel, owe their existences to her. Four of them, Kevin, Kestrel, Stanhope and Imogen, share a common father—one Patrick Bates. Inigo has Oliver for a father. Stanhope has Grace for a mother. Kevin and Kestrel’s mother Midge (Patrick’s legal wife) is dead. Imogen supposes, wrongly, that Oliver is her father. Stanhope is not told, for reasons clear to his mother Grace but no-one else, the true identity of his father. And as guilty adults have a way of protecting children from truths which are probably less painful than the lies, the children live in supposedly blissful ignorance that Stanhope and Imogen are not only half-brother and half-sister to each other, but to Kevin and Kestrel as well.

Or so Chloe believes they live.

Eventually the voice at the other end of the line is Marjorie’s.

‘Why are you ringing?’ asks Marjorie. ‘Are you all right? What’s the matter?’

‘Oh,’ says Marjorie. Is there a faint disappointment in her voice? ‘Did you have trouble getting through? I’ve been in four different offices in four weeks. If I was a man they wouldn’t dare. Do you know what they’re making me do now? The most boring series they can think of. Whole departments have toiled weeks to produce it. They told me so. A thirteen-part adaptation of a novel about the life of a middle-aged divorced woman, victim of modern times and a changing society. It is my punishment for asking to do
Z-cars
for a change. I
like
cops and robbers so they give me human suffering, not to mention staff directors who’re so permanent they can’t fire them.’

Chloe has little idea of what Marjorie is talking about, but is obliged to admire her for her capacity to cope with, and earn money in, the outside world. Marjorie, however, has neither husband nor children, which to Chloe seems a great misfortune, and emboldens her to ask, insignificant though she feels she is, a housewife up in London, knowing nothing of directors or contracts, if Marjorie will have lunch with her that day.

‘Is that French girl still with you?’ inquires Marjorie.

‘Yes,’ says Chloe, as one might say, and what of that?

‘In that case I’ll have lunch with you,’ says Marjorie, ‘and put off two bad directors and a worse writer. Because you know what will happen. She won’t just be content with your husband. She’ll want your children and your house as well. You’ll be eased out within the year and end up with nothing.’

What a simple view of life, Chloe thinks, the unmarried have. What can Marjorie know about it? She says as much.

‘I read scripts all day,’ Marjorie replies, ‘and it is the kind of thing which always happens in them. You might say I knew life well by proxy. And fiction, or so my writers swear, is nothing compared to real life. Watch out for poison in the soup. The Italiano, then, at twelve-thirty.’

She rings off, with that talent she has for giving with one hand and taking away with the other, without telling Chloe where the restaurant is.

M
ARJORIE, GRACE AND ME.

Who’d have thought it, when we were young, and starting life together, that Marjorie could ever have taken charge, would ever have stopped crying, fawning, placating, and would have developed these brisk satirical edges? Let alone earned £6,000 a year.

Poor little Marjorie, with her pear-shaped body, her frizzy hair and oily skin, her sad, astonished eyes and her sharp mind, sawing raggedly through illusion like a bread-knife through a hunk of frozen fish. Battling through rejection after rejection, too honest ever to pretend they were not happening.

Say That Again by Sasson, Gemini
Screw Cupid by Arianna Hart
Finding Home by Rose, Leighton
The Cupid Effect by Dorothy Koomson
The White Horse by Grant, Cynthia D.
Love Left Behind by S. H. Kolee
The Healer by Sharon Sala
Trust Me, I'm Lying: Confessions of a Media Manipulator by Ryan Holiday
Seeds of Time by K. C. Dyer
The Dark Need by Stant Litore