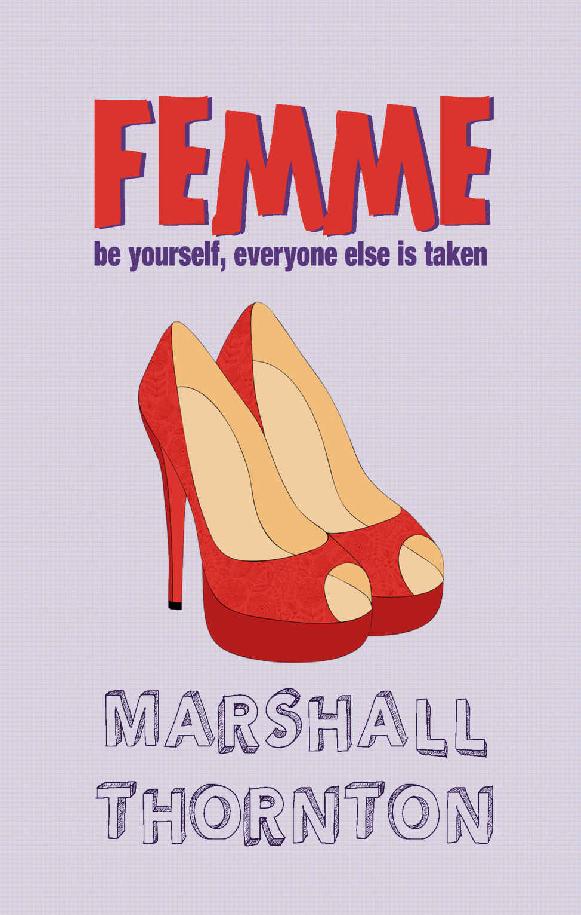 This book is a work of fiction. Names, characters, places, and incidents are products of the author’s imagination or are used fictitiously. Any resemblance to actual events or locales or persons, living or dead, is entirely coincidental.

This book is licensed to the original purchaser only. Duplication or distribution via any means is illegal and a violation of International Copyright Law, subject to criminal prosecution and upon conviction, fines and/or imprisonment.

Image by
markovka via 123rf

I would like to thank my beta readers and dear friends: Joan Martinelli, Fernando Chavez, Roberta Degnore, Owen Lovejoy, Kayla Jameth, and, Valerie and Randy Trumbull.

“Be yourself; everyone else is already taken.”

The Ghost Slept Over

Oh my fucking Gawd!
That was the first thing I thought. Seriously, it was. I rolled over in bed, looked straight into a stranger’s face, and thought,
Oh my fucking Gawd!
Well, no, it was not exactly a stranger’s face. The guy was a regular at The Bird—the bar where I worked—and I did know his name. Sort of. His name was Dog. His teammates on the bar’s softball team—the Birdmen—called him Dog. Not his real name, obviously, so I kind of didn’t know his name. Oh my fucking Gawd! I had sex with a guy named Dog!
How the flying fuck did that happen? The whole thing was a sloshy blur. I could barely remember anything about the night before. I’d gone to work like I did every Sunday afternoon. I remembered serving drinks and then, well...

Suddenly, I realized my nose was running and I had to blow it. Which reminded me that I’d been coming down with a cold for almost a week— That was it! While I was working I’d taken two cold tabs. Maybe three. Possibly four. Then I got off work and started having shots. Just to clear my sinuses. Fireball. Yum. Holy shit, I roofied myself. Oh my fucking Gawd! I roofied myself and had sex with a guy named Dog!

I kind of, sort of, maybe remembered the sex. It was fabulous. Or maybe it wasn’t. I either had amazing sex the night before with a guy named Dog or I had the most mind-blowing sex dreams about that same guy named Dog. Given that he was lying next to me and looked like he was probably naked under my extra fluffy comforter, I suspected I’d actually had fabulous, amazing, mind-blowing sex.

As quietly as possible, I reached over to my nightstand and eased out a tissue. I used it to wipe my nose, but then realized that wasn’t going to be sufficient. I had to
blow
my nose. And I had to blow my nose without making a sound. I tried but completely failed, instead making a sound reminiscent of a duck being strangled.

Dog’s eyes popped open. He twisted his head around and took in my bedroom. I’d done an excellent job on the room. The walls were an amazing eggplant and the ceiling a delicate sky blue. I’d gotten this gilt- and cream-colored French provincial bedroom set on Craigslist that was so tacky it was chic. For whimsy, I had a collection of mirrors on one wall and throw rugs shaped like various fruits on the floor. My bedding had a zillion thread count and there was so much down in my comforter, my pillows and my feather bed that it was like I’d just shot, slaughtered and plucked a gaggle of geese.

I was waiting for a compliment. Instead, Dog said, “I don’t live here.”

“What a relief! I hate it when people move in uninvited.”

Actually, I might not have minded so much if he had moved in uninvited. He was cute in a lumbering, jockish sort of way. His hair was dark and clipped close, his eyes a soft, puppy dog brown. (Hmmmm, maybe that’s where he got the nickname.) There was a swoon-inducing dimple in his chin and, though he had muscles and very broad shoulders, he also had a sexy, hairy, little belly going on. That was an interesting thought. Since he was currently covered by my comforter the only way I’d know anything about his belly was—

I reached under the blanket and ran my hand across his modest paunch. Yup, it was there. And it was still sexy as hell. And we’d definitely had sex the night before. I was about to move my hand lower and start something new—I mean, after all, if the sex was half as good as I half-remembered we should definitely do it again—but he pushed my hand away and said, “Hey. Don’t do that.”

“Sweetheart, don’t get all excited and scream rape. We’re in bed together naked. That implies a certain intimacy.”

“You’re that waiter from The Bird.”

“Lionel. My name is Lionel.”

“Your name is Dog. Do you really think you have room to talk?”

“Pity. I only remember parts of it. Maybe if we try a reenactment it will come back to us?” He looked seriously worried. That offended me a little. Well, more than a little. “Don’t look like that. Trust me, you had the time of your life."

“I don’t have sex with strangers.”

“Yes, it’s so much better to have cheap meaningless sex with people after you’ve cultivated a relationship with them.”

I couldn’t understand why the conversation had taken such a distressing turn. We’d ended up in bed together and now he seemed worried that I might think him a slut. I didn’t think he was a slut. I
knew
he was a slut. Or rather, I knew he’d been a slut at some point. No one was that good at sex without a great deal of practice.

“How did this happen?” He seemed confused. Unfortunately, he was super cute when he was confused.

“This happened because you walked up to me, threw your arm around me and said, ‘Wanna fuck?’”

“You did. Have you considered the possibility of split personality disorder?”

“I should probably go,” he said. “Do you know where my clothes are?”

I sat up and looked around the bedroom. There were no clothes on the floor, not even mine. I’m sort of a neatnik. Well, not sort of. Absolutely. Pulling the comforter around me I got out of bed. Normally, with a trick I just wander around naked. I mean what’s the point of modesty in that sort of situation? But Dog no longer seemed interested in me so I didn’t want to let him know that I was basically at half-mast. I mean, it was morning for one thing. And I was in bed with a naked man for another. These things happen. Apparently, these things were also happening to Dog since he grabbed at the sheet as the comforter dragged it along, trying, somewhat unsuccessfully, to cover himself. He was far fluffier than I was. He was at full mast. Apparently, he liked me more than he wanted to. Well, that was his problem.

I sashayed out to the living room to find his clothes.

Crap. My head hurt. It hurt bad. My mouth was dry. My stomach queasy. It was Monday morning and this happened a lot. Hangovers, not hook-ups. Softball was great. The exercise was good, the friendship, the feeling of belonging, those were all great. The afternoon of shots and beer after each game were not so great. Fun, just a bad idea. That Sunday the Birdmen won their first and only game of the season. I’d hit a double in the second inning and later on a single that drove home a run, so damned if I wasn’t going to celebrate. Of course, landing in bed with the swishy cocktail waiter from The Bird had not been part of the plan.

“What time is it?” I yelled, hoping he’d found my clothes. And hoping my hard on would go away before he got back with them. I did remember having sex, though I wasn’t going to let on. And it had been good. Real good.

So much for going to the gym. I needed to get home, get showered, get shaved, get dressed and get on the road by ten. Ten fifteen at the latest. My shift at the hospital began at eleven, and while administering stress tests all day long was not what I wanted to be doing, it paid for my truck and kept food on the table. I wrapped the sheet around me. It sort of covered my stiff prick, which wouldn’t get soft. Then I went into the living room.

There’s this idea going around that every gay guy in America has good taste. Nope, not true. For example, this Lionel guy had painted his living room red. Freaking red. And, to make matters worse, in the middle of it was a white velvet couch that looked like he’d dragged it out of an alley. Between the purple bedroom and the red living room the apartment was done up like some movie decorator’s idea of a Texas whorehouse. I didn’t even want to know what colors he’d painted the bathroom and the kitchen. With enough rooms the guy would use every color in the rainbow flag.

Lionel stood next to a rusted metal table with a glass top that looked like it belonged in someone’s backyard. He was blowing his nose. Really loud.

“Did you find my clothes?” I asked. Obviously he’d found his own, he was wearing a bright turquoise pair of boxer briefs with a white waistband. He looked good in them, perky ass, flat tummy, nice package. He looked good and he knew it, too. He was
that
type.

“Yeah,” he said. He moved and I saw my clothes sitting on the table, folded into a neat little pile.

He picked the stack up off the table and held it out to me. “I was being nice. Don’t you like it when things are neat?”

“I didn’t want my clothes folded.”

“If neatly folded clothes offend you, I apologize.” And just in case his words weren’t snarky enough, his tone pounded the point home like a hammer.

“I’m not offended. You just didn’t have to do that.”

“Do you want your clothes or not?”

I reached out to take them and the sheet loosened and fell to the floor. Instinctively my hands went to cover my crotch and the stack of my clothes ended up on the floor with the sheet.

Lionel rolled his eyes at me. “You can’t seriously be shy?”

“I just—I don’t know. It’s a reflex.” I bent over and grabbed my clothes and covered myself with them. I turned to go back to the bedroom and get dressed.

“You’re really going to walk away with that?”

He put a hand on his hip and winked at me as he said, “A hard man is good to find.” His voice was funny when he said it. Like he had an accent. Except it wasn’t an accent. He was impersonating someone but I had no idea who. Then I realized he was waiting for me to react.

When I didn’t he said, “Mae West. Famous actress from the nineteen thirties.”

“So you
do
remember?”

“We talked about it last night. On the way—”

“Of course not. I don’t let people drive in the condition you were in.”

“Oh, Gawd no! I don’t let people drive in the condition I was in either.”

“We walked. I live two blocks from the bar. You really were out of it, weren’t you? You don’t have to worry though, you’re an absolutely adorable drunk.”

“When I’m good, I’m good. When I’m bad, I’m better.” Same voice, just as bewildering. I had no idea what to say to that so I walked across the room and grabbed him by the dick.