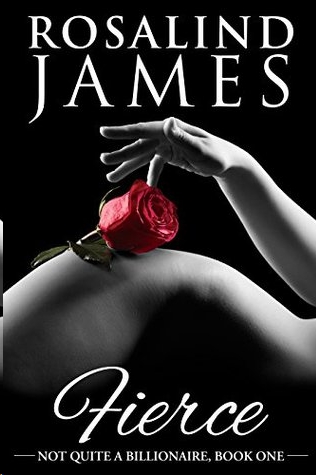 fierce
not quite a billionaire, book one
By Rosalind James

Formatting by Dallas Hodge,
Everything But The Book

I never asked Hemi Te Mana to rescue me.

It was true that I had a lousy job. Not to mention a lousy apartment and too much responsibility, although it was a responsibility I wouldn’t have given up for the world.  That still didn’t mean I needed rescuing, if that was what you’d call the situation I ended up in.

And anyway, I knew that a multimillionaire Maori CEO with too many muscles, a tribal tattoo, and a take-no-prisoners attitude was way, way out of my league.

So, no, I didn’t ask him to, but he rescued me anyway. Because Hemi was fierce. But you know what I found out? So was I.

Note: This is the “book within a book” that Faith is writing in
Just in Time: Escape to New Zealand
. Hemi isn’t Will, but you may see some of Faith’s feelings about Will coming out...

Staying on Track. Or Not.

The Language of Flowers

Coming to an Agreement

How Low Can You Go?

It’s What You Do

Such a Lovely Gift

This is a work of fiction. Names, characters, places, and incidents are products of the author’s imagination or are used fictitiously and are not to be construed as real. Any resemblance to actual events or persons, living or dead, is entirely coincidental.

Have you ever noticed how, when you’re around certain people, you seem to grow an extra thumb, and not in a good way? That you say the wrong thing and trip over your feet, and the more you realize you’re doing it, the worse it gets? That’s what that day was like.

“You’re late,” Vincent snapped at me the second I hustled through the door of the photography studio.

I handed him his coffee. “Sorry,” I said automatically. Even though I wasn’t. Sorry
or
late. I just wasn’t as early as usual, because I’d woken to find the double bed I shared with my sister Karen empty, and to the sound of her moaning behind the flimsy partition of the bathroom. She only just made it out the door to school on time, insisting she was “fine.”

“Have you managed to forget since yesterday,” Vincent said caustically, “that this is, oh, only maybe the most important day of my
life?
Something else matter more? Your girls’ softball team win the championship and stay out late having pizza? One too many wine spritzers during St. Theresa’s annual quilting bee?”

“I’m here now. Put me to work.” I managed to get the words out around the tongue I was biting for the 2,763rd time, and stuck another mental pin in my Vincent-doll. The things I put up with for the twenty-two bucks an hour that, with the Social Security check Karen had been getting since our mother’s death, was all that was keeping us clothed and housed. Well, you did what you had to do.

Vincent shook his handsome head of jet-black hair and snapped his manicured fingers at the studio space beyond. “Get set up. White seamless. Go.”

You might think that working for a New York fashion photographer was glamorous. You might, until you took a closer look and saw that I was a gofer. It was my job to make sure everyone was comfortable; that coffees and bottled waters and exotic teas were available on demand for everybody from the photographer to the stylist to the models; to keep track of the shot list and move the lights and, in general, do whatever anybody said. There was no room for ego. But then, another ego wouldn’t have fit in the studio anyway. Between Vincent, the clients, and the models, there was always more than enough ego to go around.

Especially today. The first day of a shoot for Te Mana’s menswear line, the first time Vincent had landed this most coveted of contracts. As he’d told me again and again in the past weeks, this was his ticket. If I didn’t screw it up.

I was hustling like always, keeping track of the models, half a dozen ridiculously handsome, sculpted men who were getting their hair and makeup done now. Checking that everyone had everything they needed, obeying Vincent’s hissed, frantic instructions, all while I kept an anxious eye on the clock as it ticked ever closer to ten.

Business as usual, until I set the shot list down for Vincent, and he reached for it and knocked over his coffee.

“Clumsy
bitch,
” he hissed, whirling, and I really thought for a second that he was going to slap me. Too late, because I was already moving.

I grabbed the roll of paper towels and dropped to my knees to mop up, and he shoved his chair back, caught my hip a painful blow, and sent me sprawling. My arm landed in the pool of coffee, the brown liquid instantly soaking the sleeve of my white long-sleeved T-shirt.

That was when
he
walked in. To the sight of my butt in its tight jeans sticking straight up into the air, my hair in my face, and my arm in the coffee.

I took a couple final hasty swipes, clambered to my feet with my hands, full of sopping paper towel, tucked well behind me, and smiled. My hair was still in my face, and I reached a quick hand up to dash it away even as I was stepping back, staying out of the way. Staying invisible. And trying not to stare.

In this business, you get used to hype. Everything’s the most. No, the
utmost.
Everybody’s drop-dead gorgeous, and everything is fabulous. Except he actually
was.

Hemi Te Mana. Wunderkind designer and, some said, ruthless investor, the man who’d assimilated lesser enterprises as fast as they’d run into trouble. The man with the golden touch.

And the golden skin. Or bronze, because that was the word. The
perfect
word. For a statue.

Maori, I reminded myself. From New Zealand. Tall and big and so clearly strong. His great-great-grandfather had been a warrior chief, they said, and it wasn’t one bit hard to believe.

He was shaking hands with Vincent now, a frown on his face. His
amazing
face, which seemed to have been made out of some different material than other people’s. Deep, liquid brown eyes carved by an expert hand; eyes that would surely reveal his soul if they ever softened. A straight nose; a square jaw and chin; high, strong cheekbones. It was a warrior’s face, proud and firm. And the finishing touch—those full, firm, chiseled lips that any woman with a trace of estrogen would have to imagine kissing. Or, rather, lips she would have to imagine kissing
her,
because if ever a man screamed, “I’m in charge” without saying a word, that man was Hemi Te Mana.

It was the way he stood, maybe. The controlled way he moved, or maybe
stalked
would be a better word, one that would go with his predator’s gaze. The way he took up every inch of space he inhabited. The voice he didn’t raise, because he didn’t have to. As soon as he’d walked in the door, the room had gone still, and I had the feeling that it would be true of any room he entered, anywhere on the planet.

His head swiveled, those liquid eyes widened a fraction, and he was looking at me.

I forgot to smile. I very nearly forgot to breathe as he stepped forward and said, “I don’t think we’ve been introduced.”

“Hope,” I said, wishing I didn’t sound so breathless. “Hope Sinclair. Vincent’s assistant. If you need anything.”

The eyes had softened the tiniest bit. He put out his hand, and I reached for his. Which was when I realized mine was still full of wet paper towels. I could feel myself blushing as I held up the dripping wad with a rueful smile. “A little accident.”

He wasn’t smiling. He was just staring. Burning me. My eyes were locked on his as he put that strong brown hand up to my face and brushed my hair back, and I’d stopped breathing. He rubbed his fingers over my cheek. And then he
licked
them.

“You have coffee on your face.” His gaze flicked down my body, over the brown stain decorating my arm, and he smiled for just a moment. Only a moment, but I saw it. “It’s a good look on you.”

He turned away again, and Vincent hissed furiously at me, “Go clean up. You look disgusting,” and I ran, and kept running all the rest of the day. While Vincent barked and swore, and I got clumsier and clumsier, and Hemi stood and watched. Until I looked up from my knees to find him gone.

So, yes, you could say I was at a low point that day I met Hemi Te Mana. But it wasn’t as low as I’d go.

For the past twelve years, my life had gone according to plan.
My
plan. Ever since I’d left New Zealand with my brand-new Uni degree, headed for the States and the internship that awaited me there, I’d known my course, and I’d followed it.