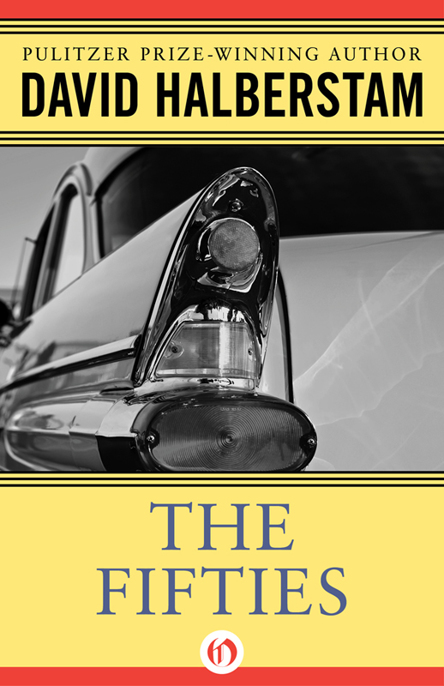 Author Interviews for
The Fifties

A Biography of David Halberstam

T
HE FIFTIES WERE CAPTURED
in black and white, most often by still photographers; by contrast, the decade that followed was, more often than not, caught in living color on tape or film. Not surprisingly, in retrospect the pace of the fifties seemed slower, almost languid. Social ferment, however, was beginning just beneath this placid surface. It was during the fifties, for example, that the basic research in the development of the birth-control pill took place; but it was not until a decade later that this technological advance had a profound effect upon society. Then, apparently overnight, rather conservative—indeed cautious—sexual practices were giving way to what commentators would speak of as the sexual revolution. It was in the fifties that the nation became wired for television, a new medium experimented with by various politicians and social groups. Ten years later television had begun to alter the
political and social fabric of the country, with stunning consequences.

Three decades later, the fifties appear to be an orderly era, one with a minimum of social dissent. Photographs from the period tend to show people who dressed carefully: men in suits, ties, and—when outdoors—hats; the women with their hair in modified page-boys, pert and upbeat. Young people seemed, more than anything else, “square” and largely accepting of the given social covenants. At the beginning of the decade their music was still slow and saccharine, mirroring the generally bland popular taste. In the years following the traumatic experiences of the Depression and World War II, the American Dream was to exercise personal freedom not in social and political terms, but rather in economic ones. Eager to be part of the burgeoning middle class, young men and women opted for material well-being, particularly if it came with some form of guaranteed employment. For the young, eager veteran just out of college (which he had attended courtesy of the G.I. Bill), security meant finding a good white-collar job with a large, benevolent company, getting married, having children, and buying a house in the suburbs.

In that era of general good will and expanding affluence, few Americans doubted the essential goodness of their society. After all, it was reflected back at them not only by contemporary books and magazines, but even more powerfully and with even greater influence in the new family sitcoms on television. These—in conjunction with their sponsors’ commercial goals—sought to shape their audience’s aspirations. However, most Americans needed little coaching in how they wanted to live. They were optimistic about the future. Young men who had spent three or four years fighting overseas were eager to get on with their lives; so, too, were the young women who had waited for them at home. The post–World War II rush to have children would later be described as the “baby boom.” (Everything else in the United States seemed to be booming, so why not the production of children as well?) It was a good time to be young and get on with family and career: Prices and inflation remained relatively low; and nearly everyone with a decent job could afford to own a home. Even if the specter of Communism lurked on the horizon—particularly as both superpowers developed nuclear weapons—Americans trusted their leaders to tell them the truth, to make sound decisions, and to keep them out of war.

For a while, the traditional system of authority held. The men (and not men
and
women) who presided in politics, business, and media had generally been born in the previous century. The advent
of so strong a society, in which the nation’s wealth was shared by so many, represented a prosperity beyond their wildest dreams. During the course of the fifties, as younger people and segments of society who did not believe they had a fair share became empowered, pressure inevitably began to build against the entrenched political and social hierarchy. But one did not lightly challenge a system that seemed, on the whole, to be working so well. Some social critics, irritated by the generally quiescent attitude and the boundless appetite for consumerism, described a “silent” generation. Others were made uneasy by the degree of conformity around them, as if the middle-class living standard had been delivered in an obvious tradeoff for blind acceptance of the status quo. Nonetheless, the era was a much more interesting one than it appeared on the surface. Exciting new technologies were being developed that would soon enable a vast and surprisingly broad degree of dissidence, and many people were already beginning to question the purpose of their lives and whether that purpose had indeed become, almost involuntarily, too much about material things.

I
N THE BEGINNING, THAT
era was dominated by the shadow of a man no longer there—Franklin D. Roosevelt. He had died in 1945, but his impact on American politics was so profound that even the most powerful Republican leaders believed privately that their party might be permanently in the minority. Roosevelt had been cast forth in the midst of two transcending events—the Great Depression and World War Two. The first was responsible for a massive reordering of the American economy and society, thereby creating a huge, new base for the Democrats; the second permitted Roosevelt to emerge as an international leader in a time of great crisis and to prolong his presidency for two additional terms. During that time, the infrastructure of the Democratic party became ever more powerful and Roosevelt was able to extend his reach into the courts.

Roosevelt was the ultimate modern politician, the first great master of modern mass communications in a democracy. For millions of poorer Americans and for the new immigrants and their children, his ability to exploit radio and make it seem his personal vehicle had a particular resonance. To them, Roosevelt was not only President-for-life, he was their guide to the rites of American politics.

The effect of this on the Republican party, mired as it was in political attitudes that predated the Depression, World War Two, and the coming of radio, was devastating. In July 1949, some nine months after his own shocking defeat by Harry Truman (which seemed to promise the Roosevelt coalition would go on ad infinitum), Thomas E. Dewey met with Dwight Eisenhower, then the president of Columbia University, to begin the process of coercing Ike to run for the presidency in 1952 as a Republican. Eisenhower’s notes of that meeting are unusually revealing of the Republican dilemma: “All middle-class citizens of education have a common belief that the tendencies towards centralization and paternalism must be halted and reversed. No one who voices these opinions can be elected. He [Dewey] quotes efforts of Hoover, Landon, Willkie, Himself. Consequently we must look around for someone of great popularity and who has not frittered away his political assets by taking positive stands against national planning, etc, etc. Elect such a man to Presidency,
after which
[
N.B.
: italics Ike’s] he must lead us back to safe channels and paths.” In effect Dewey was saying that the solid citizens who could make the right decisions for the future of the country had, because of the New Deal, become a minority and that the nation had fallen into the clutches of dark and alien forces.

Not surprisingly, the Republican party was traumatized and bitterly divided. Certainly, the Democratic party was divided as well, between the liberal Northern urban coalition and the Southern conservative Jim Crow wing. But for all their differences, the Democrats had a certain glue: They won, and in victory there was patronage and power, a combination that transcended ideology. For the Republicans there was only the taste of ashes. They had been out of office since 1932. The shadow of the Depression still hung over them, and the Democrats were still running against Herbert Hoover, portraying the Republicans as the party of cold, uncaring bankers. Were the Republicans forever to be trapped by those events then twenty years in the past?

Of the divisions within the Republican party, the most obvious was a historic, regional one. On one side were the lawyers and bankers of Wall Street and State Street, their colleagues through the
great Eastern industrial cities, and those in the powerful national media, based in New York. They were internationalist by tradition and by instinct: They had fought against the New Deal in states where the power of labor was considerable but had eventually come to accept certain premises of the New Deal. By contrast, the Republicans of the heartland were essentially unchanged by the great events that had overtaken them; they were resentful of World War Two and suspicious of how Roosevelt had gotten them into it. This was particularly true of the many German-Americans in the region. Instinctively Anglophobic, they were wary of our growing involvement in Western Europe and our close alliance with the British. If they had a bible other than the Bible, it was the conservative, isolationist
Chicago Tribune
of Colonel Robert R. McCormick. They were anxious to go back to the simple, comfortable world of the twenties, before the New Deal had empowered labor unions, before air travel had shrunk the Atlantic Ocean into a pond, and before scientists had ever thought about developing intercontinental ballistic missiles to catapult atomic warheads into their midst.

They lived in God’s country, a land far from oceans and far from foreigners, and they were all-powerful in their own small towns. Many had gone to college and returned home to succeed their fathers in family businesses. They had always controlled their political and economic destinies locally, and they presumed that by acting in concert with others like themselves in other small towns, they could control the national destiny. Earlier in the century they had regarded Taft, Harding, Coolidge, and Hoover as the guardians of their values in Washington; they had considered the nation’s capital an extension of their own small towns. Now they looked at Washington and saw the enemy. Even in their own towns, their mastery had been limited by the rise of arrogant, impertinent labor unions. Even worse, they seemed to have lost control of their own party. That was the final insult. Confident that they represented Republicanism and true patriotism, they were at war with the Eastern Republicans, who, in their eyes, were traitors, tainted by cooperation with the New Deal. Robert Taft, the conservative wing’s great leader, believed Easterners had fallen victim to the liberal press and
labor unions.
As Taft wrote in a letter to a friend about Tom Dewey: “Tom Dewey has no real courage to stand up against the crowd that wants to smear any Republican who takes a forthright position against the New Deal.”

The conservatives had lost in 1940, when the Easterners had blitzed them at the last minute with Wendell Willkie at the convention. A Hoosier by birth, Willkie had to their minds lost touch with
his roots and become a captive of the East. “The barefoot boy from Wall Street,” he was called. Willkie had, said Alice Roosevelt Longworth, “grass roots in every country club in America.” Then in 1944, with Willkie virtually supporting Roosevelt against his own party (which, of course, did not surprise the conservatives—they had known that about him before he knew it himself), the same Eastern forces coalesced behind Thomas E. Dewey, the modern, reform-minded governor of New York. The Easterners knew, after all, what it took to be elected governor of New York in this day and age—the kind of deals necessary with labor and ethnic groups. The first time around, Dewey was easily defeated by an aging, sickly Roosevelt, who won his fourth term. But in 1948, the Republicans were finally free from Roosevelt’s personal charm. The Easterners nominated Dewey a second time.