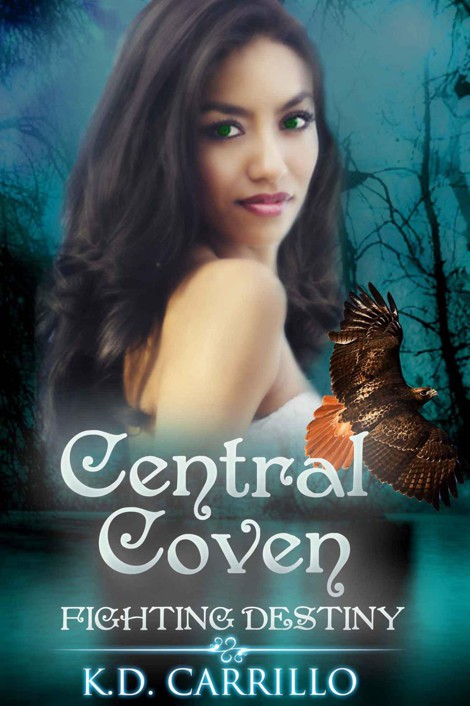 Published by K.D. Carrillo at Kindle

Without limiting the rights under copyright reserved above, no part of this publication may be reproduced, stored in or introduced into a retrieval system, or transmitted, in any form, or by any means (electronic, mechanical, photocopying, recording, or otherwise) without the prior written permission of the author.

This is a work of fiction.  Names, characters, places, brands, media, and incidents are either the product of the author's imagination or are used fictitiously.  The author acknowledges the trademarked status and trademark owners of various products referenced in this work of fiction, which have been used without permission.  The publication/use of these trademarks is not authorized, associated with, or sponsored by the trademark owners.

This book is available in ebook format.

My dream has always been to write stories to entertain people.  I'm not as concerned with fame and fortune.  So, first I would like to thank you for choosing this book to read in your free time.

I would like to thank my family for believing in me.  My mom has always pushed me to reach higher than I believed I could.  Mom, this is for you and your never-ending faith in me.  Thanks to my seven-year-old son for understanding mommy spending so much time on the computer.  Reach high my boy.  Anything is possible if you try.  I want to thank my husband for cooking so many dinners, and putting up with my grouchiness when I got stranded on a chapter.

I need to thank my best friend, editor, rock, and major source of inspiration.  Fawn you have been my social life, sanity, and my Anita since I was nineteen.  I'm glad I got to finish one of my major goals with your help.  Ok, enough with the mushy stuff.

The glow of a roaring fire cast warmth on the dark stonewalls of the ancient castle.  Several walls were cloaked with tapestries depicting pastoral scenes.  The cool smooth stone floors were covered with Persian rugs woven in colors of gold, cream and vibrant crimson.  High backed chairs, ornately carved, and inlaid with plush velvet cushions surrounded a heavy dark oak table.  Servants quietly and inconspicuously wandered about with silver trays covered with delicacies, or silver pitchers with ale or wine.  Some set delicate china place settings and lit taper candles held in heavy crystal candelabras.  All were preparing the room for the mistress of the manor.

Marguerite glided in her long satin skirts flowing away from her.  Violet satin pooled around her feet, while she waited for her chair to be pulled out for her.  Her auburn hair was manipulated into an intricate braid, with strings of pearls woven into the design.  A herald announced the arrival of her guests, Hans and his wife Elaina, Carlos, and Felix.

Little changed in the supernatural world.  Most of the ancients preferred horses to modern machines.  Marriages were arranged, and few women held positions of power.  In those rare examples, those women gained their position because they were uniquely powerful. Yet, despite the antiquated customs of the supernatural world, he felt no slight taking the subordinate position at this gathering.  The biggest reason for that was the second most powerful being alive was sitting across from him.  Not hard to acknowledge her dominance when she could wipe the floor with him.

Carlos glanced over at the empty chair and single goblet of red wine.  He raised his eyebrow in silent question.  Almost every supernatural race was accounted for, except one…

“Yes, we have a few moments before dark, and our entire party is gathered together,” Marguerite intuitively replied.

The light from the stained glass window dimmed, and was extinguished.  Again the herald appeared and declared in a loud ceremonious voice, “Lord Geoffrey Grey former Duke of Suffolk.”

Marguerite waited for her last guest to be seated.  A servant brought over a large leather bound book.  The gilded edges glimmered in the moonlight.  She placed her hand lovingly on the cover.  When she pulled her hand away the cover opened, and pages flipped of their own accord.  It stopped on a masterfully illustrated page titled, “The Central Coven.”

“The prophecy is upon us.”  She looked into the faces of her fellow
Council
members, her most trusted allies, and knew few outside of this circle could be trusted with such news.  “Since time immemorial we have existed on the verge of war, with each other and with humans.  We have dominated them as gods of the ancient world, and we hid from them during the Inquisition.  We have fought each other for dominance, both personally and for our respective races.   Only the six of us have managed to exist in harmony.” Marguerite gestured to the closed book, “Book, if you will…”

Eliana’s sky blue eyes cooled and focused on Marguerite.  “You know darling it is wonderful to see you as always, but was your purpose in calling for this meeting to read the most famous prediction in our history?  Surely there is a point to this reading.”

“I see,” Hans said flatly.
Eliana looked into everyone’s face, and still didn’t find the answer the others saw so quickly.  Marguerite sought to end her confusion.  “Eliana, where is your son attending college this fall?”  Her brow furrowed showing her deepening confusion.  “He is in Washington State in America.  It is very kind of you to inquire, but I fail to see the point in this.”

“Where in Washington is he attending?” Marguerite pushed.
“He is going to Central Washington University.  Central, uhm…”  “Carlos, where is Anita going?” Marguerite asked without looking at him.  “Central,” he replied quickly.  Eliana looked to Marguerite and Felix, and they nodded their answers.  “But, he doesn’t even know who he is, not really.  He isn’t ready for this.”

“Eliana,” Carlos began, “we have long argued with you against hiding his true nature, but you stubbornly opposed us.  Now he will face his nature whether you are ready for him to face it or not.  You have done him a disservice in your effort to protect him.  I pray my daughter does not suffer for your decision to shelter your son.”

“Enough,” Marguerite demanded.  “As you said we have had this argument before.  It is done know.  It is pointless to punish friends for their parenting choices.  We will manage as we always have.  Grey you are to head to Washington and renew your acquaintance with Anita.  She is still acclimating to her situation.  You can go under the guise of checking in on her.  Use your many skills to bring all of them together.”

Grey nodded, and took his leave.  He hated
Council
politics, but trusted none of his kind to represent their collective interests.  Still he refused to remain once his orders were given.  They did not view him as an equal in their group, and considering some of the other members of his species he could not completely disagree.

“Now, we have some business to address,” Marguerite said when she thought Grey was out of earshot.  “Hans, I believe a union between our families would solidify our positions, and that of our children with the rest of the
Council
.”

Hans smiled broadly. This was the outcome he hoped for.  Chloë DuLac’s beauty was well known.  It was just as widely accepted, that his son was the
most handsome man of age.  Her power and money combined with his would make the most powerful couple since Chloë’s parents.  Yes, it would be a great match for his son.

Eliana looked troubled.  Marguerite was often cold, though they had been friends for centuries, and she took a lot of time to warm to.  She wanted love for her son, not the political machinations of the
Council
.  Marguerite, despite her cool exterior and political shrewdness, knew her friend well.

“She is most unlike me Eliana.  Where I am steeped in tradition, she is the very model of a modern teenager.  Thanks to her sister’s care these last few years she has been immersed into the life of a normal American girl. She is defiantly normal, except with a few enhancements.  I know she would make your son very happy.”

“If you are both so sure…” Eliana began.  “I am love.  He is my son as well.  You are not the only one who knows what is best for him,” Hans comforted. Eliana took a deep breath and nodded.  She would not interfere.  Marguerite smiled and they continued to settle the details for the marriage contract.

Grey left the hallway where he was eavesdropping.  Part of him understood this maneuvering, and using their children for political gain.  It was the world he came from as well.  But, he had spent the last few centuries among humans, and no longer agreed in trading children as assets.  It was not his decision.  Their children would find themselves married.  Aristocratic parents always shaped their children’s destiny.  You cannot fight destiny and win.