Fighting Love (Love to the Extreme) 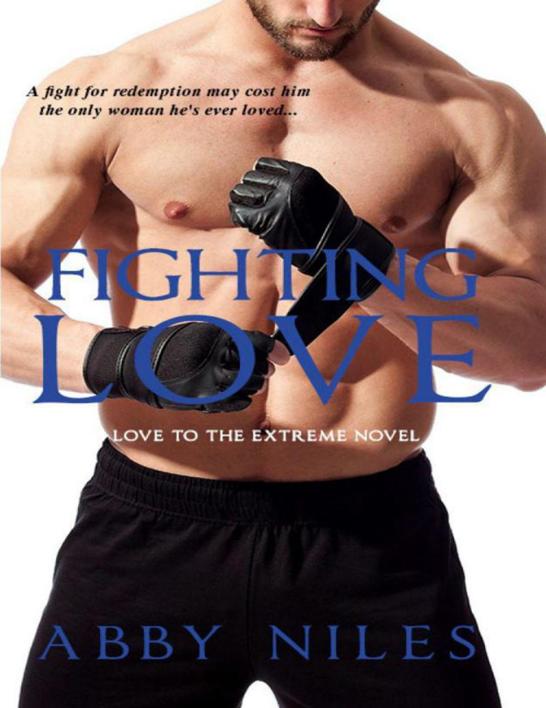 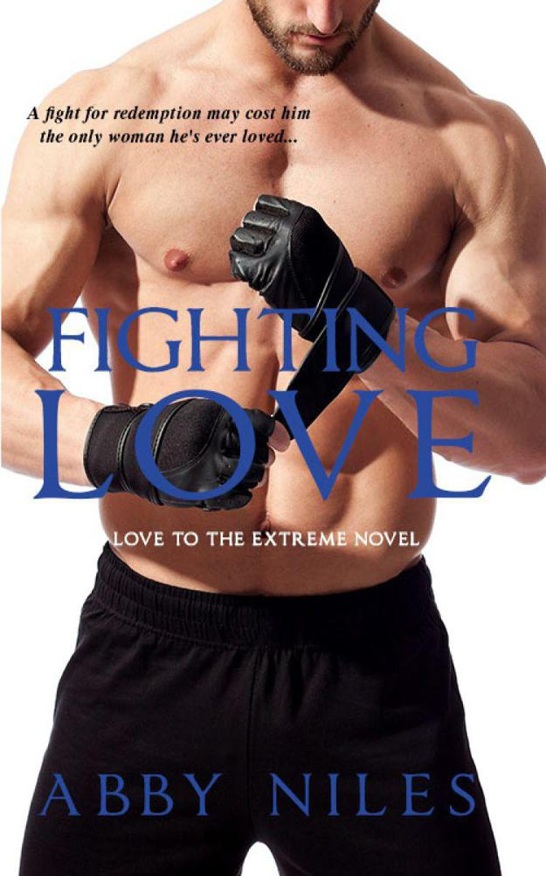 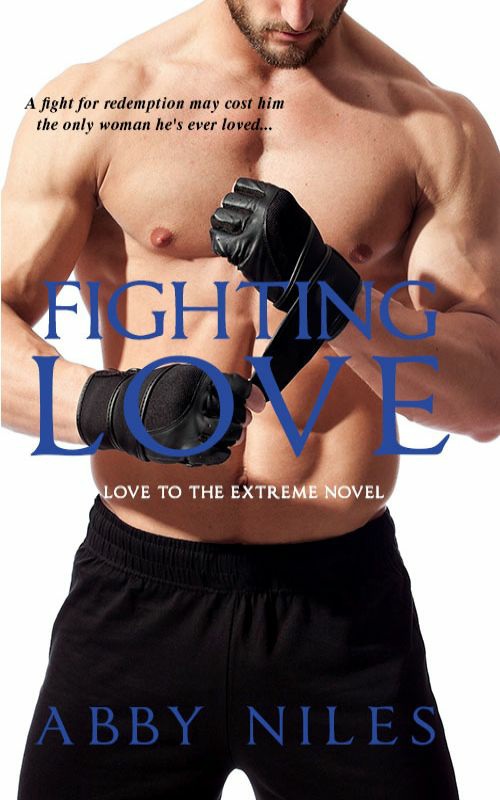 A Love to the Extreme Novel

This book is a work of fiction. Names, characters, places, and incidents are the product of the

author’s imagination or are used fictitiously. Any resemblance to actual events, locales, or persons,

living or dead, is coincidental.

Copyright © 2013 by Abby Niles. All rights reserved, including the right to reproduce,

distribute, or transmit in any form or by any means. For information regarding subsidiary rights,

Three years together is drawing to an end. Thanks for putting up with my Jekyll & Hyde

tendencies while I’m under deadline, especially this past year. Love you guys!

What the hell did he give a woman for Valentine’s Day when he no longer had connections?

Frustrated, Tommy “Lightning” Sparks increased the speed of his jog, his grip tightening on

Warrior’s leash as his feet ate up the sidewalk, his even breathing visible as it puffed up into the

February morning air. The frigid chill stung his cheeks as he glanced down at the chocolate

Labradoodle to make sure his agitation wasn’t transferring over to his dog. Nope. As always, the

animal trotted along beside him, happy as all hell.

He wished he could say the same.

weeks, and he was no closer to an answer. The damn holiday was tomorrow.

He always did something special for Julie to show how much he appreciated their friendship.

Last year, he’d arranged for her to meet her favorite country singer backstage after a concert. Easy

enough to do, since the singer had been a fan of his, but Tommy didn’t have that kind of influence

Yeah, he was still Tommy “Lightning” Sparks. No one could take that from him, but the name

was tainted now, didn’t have the same punch behind it that it once did. Or the same pride.

And that fucking sucked.

going to be stuck with a heart-shaped box full of chocolates for V-Day.

To hell with that . He wouldn’t resort to such a lame present. Julie deserved more than some

no-thought-or-effort-needed piece of cardboard with crap candy in it. He would just have to get

He pounded on down the pavement, trying to come up with something. Suddenly, the acrid

smell of burning hit his nose. Blinking out of his thoughts, he glanced around. Black smoke

billowed high into the air, not too far in the distance.

The only things in the area were homes, and the amount of smoke he was seeing definitely did

not come from a fireplace. He jogged around the corner. A group of people from neighboring

houses had gathered in the middle of the street, some still in pajamas—in front of his house.

Breaking into a sprint, Tommy raced with Warrior down the sidewalk. The sounds of sirens

blaring in the background let him know help was on the way. But the closer he got to the one-

story vinyl-sided house, the more he had difficulty computing what he was seeing. Fire poured

from the side windows, out the back of the house, up from the roof. What the fuck?

As he shoved his way through the crowd, he gaped wide-eyed at his house, dumbfounded.

Everything he owned was on fire. Everyt—

Panic compressed his chest. No. He thrust Warrior’s leash at a lady standing next to him. “Take

him.” When she just stared at his hand, he yelled, “Take him!” With a startled jerk, she snatched

the nylon rope. “Don’t let him follow me,” Tommy ordered her.

Just as a fire truck careened around the curve, immediately followed by a second one, Tommy

darted for the house. A hand latched onto his forearm. “Dude, you can’t go in there!”

The hell I can’t. Yanking free, Tommy tore up the front porch and heaved a shoulder into the

door. The wood gave instantly, and he stumbled inside. Smoke enveloped him, making his eyes

water and his throat burn. Coughing, he covered his nose and mouth in the crook of his arm and

looked around, trying to get his bearings.

Searing heat came from the engulfed kitchen; flames spread across the ceiling of the living

room and hallway that led to his bedroom. Debris rained down from above. A glowing ember

landed on the sleeve of his black fitted running jacket. Knocking it off, he hurried across the living

room, hunching over, low to the floor. Not that it helped. The thickening smoke filled every corner.

One end of the couch suddenly lit up in flames and ignited the curtains behind it. As the fire crept

up the wall, the room brightened.

Get the box and get out.

He moved forward. The intense heat was unbearable. Sweat rolled down his face. Flames shot

out from the hallway into the living room, driving him back. Fury made him bellow as he surged

forward into the hall.

He couldn’t lose it. Everything that meant anything to him was in that box.

Two beams crashed to the ground a few feet from him. Orange embers swirled toward him.

Once again he was forced back. His lungs burned, his eyes watered, his throat felt scorched. He

But he couldn’t give up. Not yet.

Just as he was about to push forward one last time, two arms locked around him and dragged

him backward. Instinctively, he yanked against the hold. Then he saw the bedroom, and the fight

left him in one defeated whoosh. The room was immersed in flames. The wall, the ceiling, the

The box was gone. And Tommy felt as if he’d just lost a part of himself.

As the two firemen pulled him outside onto the lawn, fresh air greeted his starving lungs. He

inhaled a greedy breath, which had him rolling onto his side, coughing.

“Is anyone else in the house?” a fireman yelled at him.

When a couple of paramedics tried to put him on a gurney, he sat up and waved them away,

The female EMT wrapped a blanket around him. “I have to check how much carbon monoxide

you’ve inhaled. You’ll need to come with me.”

Considering his lungs felt really heavy, he probably shouldn’t argue. As he sat down in the back

of the ambulance, Tommy glared at his house. Former house. And once again he felt his world

close in on him.

When it fucking rained, it poured.

and garage. Fire poured out the side windows, out the back of the house, out the roof.

He’d gone for a run. A goddamn run.

Yanking off his beanie, he knotted his fingers in his dark blond hair and stared at the fiery mass

that had been his home. He’d only been gone for a little more than an hour.

Hell, why was he thinking about time? Shit happened. Hadn’t he been riding the shit-happened

A bubble of laughter threatened to explode out of him. After everything that had come down

on him over the last four months, of course this would happen. It had to. It was the next logical

sequence of events. He’d fucked up. Lost his title. Got his ass ousted from MMA. So, to make

money he’d essentially sold himself to the highest bidder.

Of course his house would burn to the fucking ground.

The EMT placed something against his lips. “Breathe into this until I tell you to stop.”

After he did, his lungs rebelled and he coughed hard.

“CO detected, but low.” She held up a clear plastic mask. “Sir, I need you to put this on. It’s

oxygen. It will help get the carbon monoxide out of your body.”

He pressed the mask over his nose and mouth and inhaled the crisp, pure oxygen. Another

cough erupted out of him, but he continued to inhale deeply as he watched his life go up in smoke

for the second time this year.

“Sir, does anything hurt?”

Annoyed, he shook his head, said, “No,” and tore his attention away from the house, the lost

memories, to survey the chaotic scene around him.

hose, shooting a powerful jet of water at the front, while two others concentrated on the side. He

didn’t know what was being done about the back. If anything. The fire looked out of control.

He watched another flame erupt from a different portion of the roof. Still, when it came right

down to it, nothing in that house mattered except that damn box.

Hell, he’d had no idea how important it was until he’d realized he was about to lose it. And now

it was too late.

A whine came from beside him and he scratched the top of Warrior’s head. The chocolate

Labradoodle looked up at him, tongue hanging out.

At least he always took his dog with him on his runs.

“Are you the owner?” a firefighter asked as he walked up.

“Does anyone else live here?”

“I need to ask you a few questions.” When Tommy nodded, the man flipped open a notebook

The man, who had been concentrating on writing, glanced up sharply. “Tommy ‘Lightning’

Fucking great. An MMA fan. “The former Tommy ‘Lightning” Sparks.” Just like his house, his

Apparently there was, and the dude went back to his twenty questions. “When did you leave?”

Half Past Mourning by Fleeta Cunningham
Embracing Emily (#7 Warriors of Kelon) by Angela Castle
Day of the Dragon King by Mary Pope Osborne
Through a Glass Darkly: A Novel by Karleen Koen
Master of Space and Time by Rudy Rucker
Blind Eye by Jan Coffey
Life Sentence by Judith Cutler
Utterly Yours (Book Three) (An Alpha Billionaire Romance) by Alexa Brookes
The Secret of the Stones by Ernest Dempsey
Prisoner of Glass by Mark Jeffrey