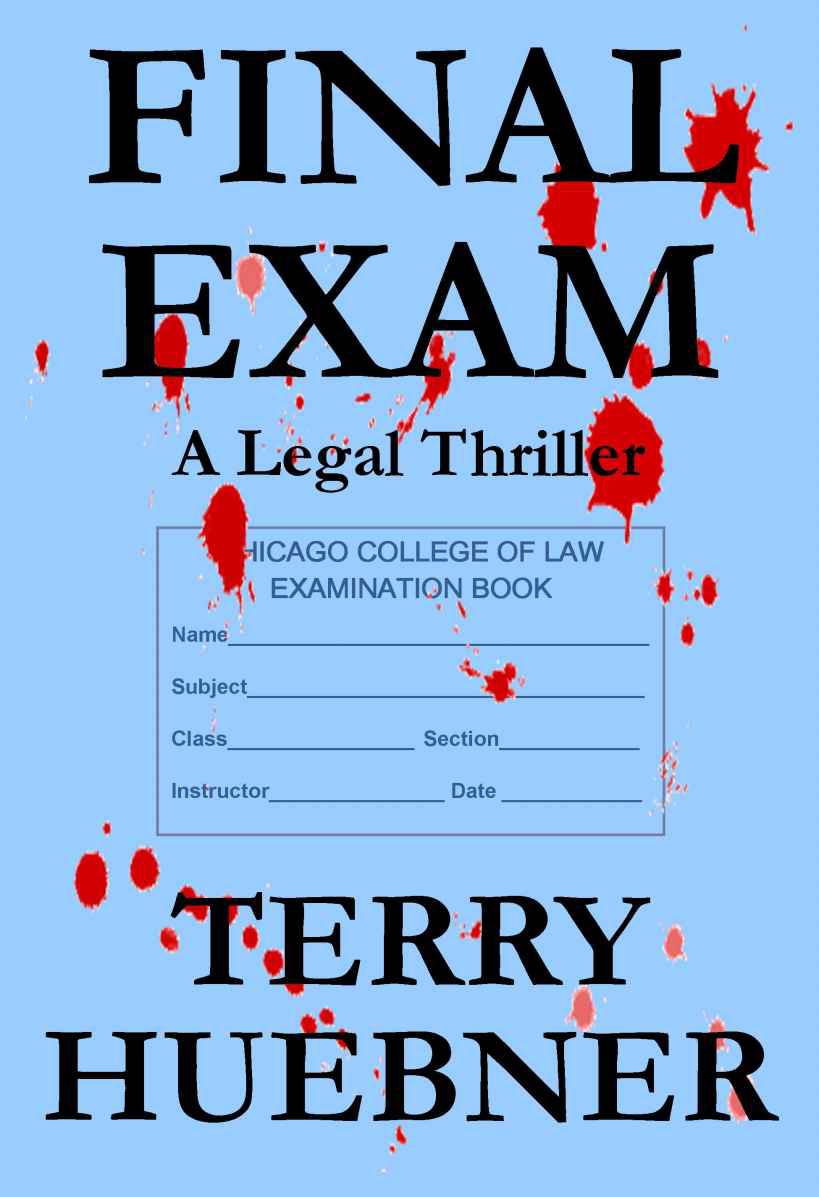 Three strands of hair ... two drops of blood ... one thumbprint ... an embittered law professor ... a decade-old indiscretion … an autographed Louisville Slugger – mix these all together in a stew of secrets, lies and promises kept and broken and you have the “Law School Murder”, the next big media case of the moment, and the subject of Final Exam, the first of the Benjamin Lohmeier series of legal thrillers. Shortly after New Years, the shattered body of Professor Daniel Greenfield is found on the floor of his office at the almost-deserted Chicago College of Law. The police question and ultimately charge one of Greenfield’s former students, Megan Rand, now living a quiet life as a mother and appellate court clerk. She calls her friend, Benjamin Lohmeier, a former Chicago prosecutor now stuck in a repetitive civil practice out in the suburbs, and begs for help. With the media circus swirling around him, Ben unravels old mysteries and confronts unseen enemies as he searches for Daniel Greenfield’s killer. Was it a spouse bent on revenge? A colleague harboring long-held resentments? Another of Greenfield’s students? Or could it even have been Megan herself, fueled by a secret of her own?

Terry Huebner began his legal career as a Legal Assistant for the prestigious Chicago law firm of Jenner & Block in 1988, before beginning law school at the Chicago-Kent College of Law in August of 1989. Over the years, he has worked in a variety of legal settings, both large and small, before opening his own practice in September of 2002. Throughout his career, he has acquired vast experience representing individuals, businesses and governmental bodies in complex matters primarily focused on litigation. His current practice focuses on civil litigation and other more general practice areas such as corporate, real estate and estate planning, where he has also developed considerable expertise.

No part of this book may be reproduced, scanned or distributed in any printed or electronic form without permission.

This
ebook
may not be re-sold or given away to other people.

If you would like to share this book with another person, please purchase an additional copy for each reader.

If you’re reading this book and did not purchase it, or it was not purchased for your use only, then please return to Amazon.com and purchase your own copy.

For more information on the author and his works visit http://www.terryhuebner.com

Names, characters, places and incidents either are the product of the author’s imagination or are used fictitiously, and any resemblance to actual persons, living or dead, businesses, companies, events or locales is entirely coincidental.

For all those over the years who inspired me and made me believe that this was really possible.

Gordon Hyatt carried himself with the easy, relaxed manner of one who has spent his life contemplating the battles of others, while never quite engaging in any of his own.

At this moment and during all moments really, he appeared to the world to be exactly who he was - a Professor of Law at the Chicago College of Law.

Blessed with a glint in his eye and a Virginia drawl, Professor Hyatt could dress down an unsuspecting student without any hint of venom or animosity.

The student would dig himself a hole and not realize he was in over his head until he saw the grin on Hyatt’s face and heard the murmuring of his classmates.

Hyatt pointed the key fob at the shiny, black BMW and the locks clicked shut.

He stood there and admired the car as a rogue snowflake floated down and landed on the hood.

He wore a brown leather jacket, worn buttery soft and unzipped for the short walk, and carried an old leather briefcase slung over one shoulder.

His shaggy brown hair and his beard were just beginning to show flecks of gray as he advanced beyond his early-fifties.

He reached the end of the parking lot and stepped over a low metal parapet onto the sidewalk beyond.

He looked up Adams Street toward the river as a strong, cold wind blew in his direction.

The street was virtually deserted.

Then he crossed in the middle of the block and took a sip of his Starbuck’s, letting the hot steam drift up to his nostrils in the cold air.

He took another sip of the coffee as he pushed through the revolving doors at the front of the school.

Hyatt nodded at the security guard as he passed by and made his way to the elevators.

Upon reaching his office, he unlocked the door and pushed inside.

He set his coffee on the desk and dropped his jacket and briefcase on a chair next to the door before moving around the desk and plopping down in his chair.

In front of him sat the last stack of final exams from his first-year Property class.

Hyatt glared at them and growled.

Then he fired up his computer and
surfed
the web for fifteen minutes before feeling the pull of the exams.

He glanced over at them, sighed,
then
pulled the top one off of the pile.

By ten minutes of eleven, he needed a break.

He put down his pen, pushed back from his desk and stood, straightening his back and yawning.

The coffee had gone right through him.

He swore he peed twice as much as he did ten years ago.

This must be the curse of the middle-aged man.

Can’t hold your liquids any longer.

He looked at the remaining exams sitting in a pile on the corner of his desk.

Probably an hour-and-a-half or so to go, he thought.

He could finish up here and be home in time to grab a late lunch.

He would take the exam scores home with him and figure out a grading scale tonight while watching the Fiesta Bowl.

He eyed a note sitting next to the phone.

Last week, he had received a voicemail message from Dan Greenfield about a law review article he had written years ago which briefly touched on the constitutional implications surrounding the use of DNA in child custody matters.

Hyatt rummaged through a file cabinet behind his desk and pulled a copy of the article out of an expandable file folder.

He would stop at the bathroom, then pop down to Greenfield’s office on the 6th floor and leave a copy of his article on Greenfield’s chair, along with a note offering to discuss the matter over lunch any time next week.

He tucked the article under his arm and set off for the washroom.

A moment later, he strolled past the elevator and toward the stairwell at the end of the hallway.

As he reached the doorway to the 6th floor, Hyatt pulled a keycard out of his wallet and stuck it in the slot next to the doorway.

The door clicked, Hyatt pulled the handle and stepped from the stairwell.

The first thing he noticed was the smell.

It hit him like a slap in the face - a sick, rotting, metallic kind of smell.

He looked down the hallway toward Greenfield’s office, then back to the right toward the main entrance of the 6th Floor near the elevators.

He hesitated, then turned and headed toward Greenfield’s office.

The smell grew stronger as he neared Greenfield’s door at the end of the hall.

He thought he was going to gag.

The door was slightly ajar.

He knocked, pushing the door open with his shoulder and called out, “Dan, are you in there?”

Hearing no response, he entered the room only to be greeted by the strongest, foulest odor he had ever encountered.

He turned involuntarily back toward the door and closed his now tearing eyes.

Hyatt forced himself to turn back in an attempt to identify the source of the smell.

The wall, bookshelf and credenza in the back corner were splattered with blood.

He took several short, hesitant steps around the desk.

Daniel Greenfield lay in a heap on the floor, his body partially obscured by his desk and chair.

His skull, or what was left of it, had been crushed.

Lying across Greenfield’s legs, covered with blood and pieces of Greenfield’s skull and brain matter, was a baseball bat.

Hyatt staggered back as the reality of the scene hit him.

He tripped over the leg of one of Greenfield’s guest chairs and fell awkwardly against the wall next to the door, striking his head.

He gagged and began to retch.

Then he stumbled to his feet and backed out the door.

He raced down the hallway, around the corner, through a set of double doors and past the elevators to the men’s washroom.

He bolted through the doorway into a stall, where he vomited.

Several minutes later, drenched in sweat, his peaceful existence now a distant memory, Hyatt found a phone on the desk of one of the secretaries and called security.

By the time Detective Scott Nelson pushed through the circular doors at the front of the building less than an hour later, the crime scene had already been secured and the police techs were well into the process of gathering evidence.

Nelson was a short, stocky man in his early forties, about five foot seven and weighing almost two hundred pounds, depending on lunch.

He kicked the snow off of his black leather boots on the mat inside the door and unzipped his parka.

Sipping on a Diet Coke from the McDonald’s drive-thru, he ambled over to the security desk, where he found a nervous, too-young looking security guard apparently awaiting his arrival.

Running his hand through his thinning and often out-of-control crop of sandy brown hair, Nelson leaned over the security kiosk and spoke to the young security guard in a soft voice.

Would you please locate your chief of security for me?”

Getting no response other than a blank expression, Nelson continued.

“Whosever in charge will do.

As soon as you can, if you don’t mind.

“Sure,” the guard muttered, grabbing his radio and placing a call to his boss.

A moment later, a tall, lean man dressed in a denim shirt and jeans rounded the corner carrying a walkie-talkie.

The tall man extended his hand to the detective.

“Sure can,” the detective answered.

“Are you in charge here?”

My boss, Steve Sanborn, is the Director of Security.

But he’s out of town on vacation until Monday.

We usually don’t expect this kind of commotion.”

Hostage For A Hood by Lionel White
Come and Get It by Beyond the Page Publishing
An Offer She Can't Refuse by Emma Darcy
Tap Dancing on the Roof by Linda Sue Park
A Heart's War (The Broken Men Chronicles Book 5) by Carey Decevito
A Flame Put Out by Erin S. Riley
Jordan, Nicole - Notorious 1 by The seduction
Lightning Strikes Part 2 (36 Hours) by Baxter, Mary Lynn
Witches: The Absolutely True Tale of Disaster in Salem by Rosalyn Schanzer
Chains Of Command by Graham McNeill