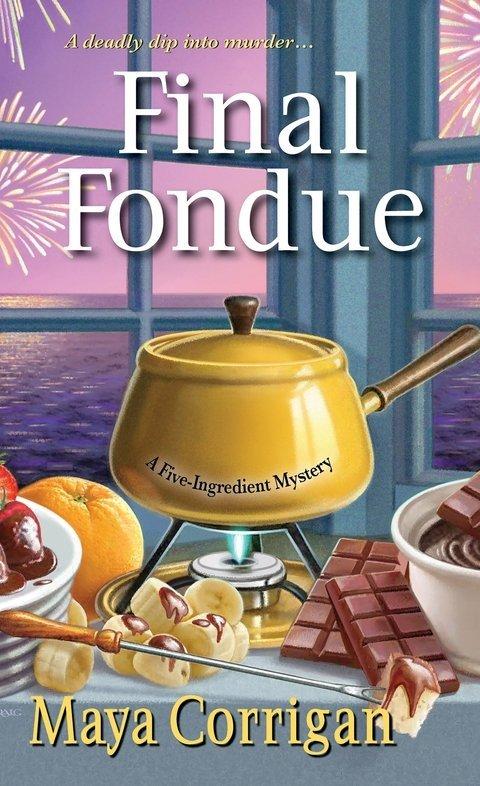 FINAL FONDUE
Val noticed Grandad’s drooping eyelids. “Why don’t you go to bed? I’ll take out the trash and set up the coffee maker.”
“Okay.” He gave her a peck on the cheek. “Good night.”
Val carried the trash bag through a small enclosed porch and opened the back door. With no moonlight, she could barely see across the yard to the shed where the garbage bin was. She waited for her eyes to adjust to the dark and then started toward the shed, focusing on the uneven ground so that she wouldn’t stumble.
Halfway across the yard, bulging eyes looked up at her. She jumped back, startled, and dropped the trash bag.
Then she laughed. The plastic eyes sat atop the festival’s souvenir crab hat. One of the tourists staying in the house must have dropped the hat in the yard.
Val stooped to pick up the hat and froze.
Two feet away, a woman lay on the ground, a rope around her neck, her eyes open and lifeless as the crab eyes . . .
Books by Maya Corrigan
BY COOK OR BY CROOK
SCAM CHOWDER
FINAL FONDUE
Published by Kensington Publishing Corporation
Final Fondue
Maya Corrigan