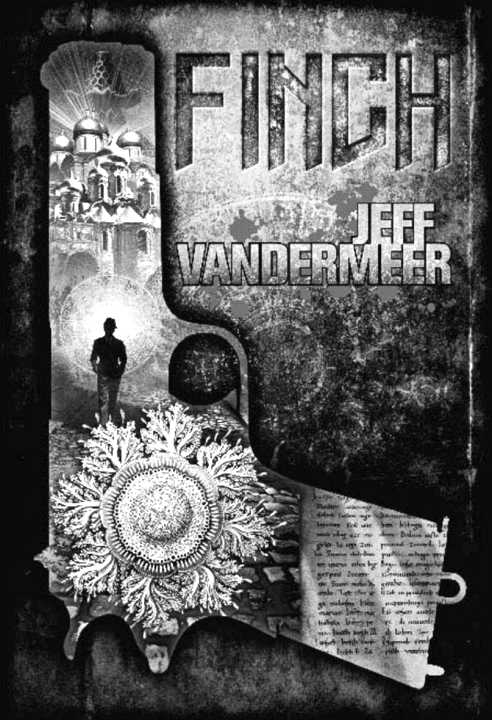 "VanderMeer's Finch is . . . well, it's Farewell, My Lovely if Philip
Marlowe worked for the pod-people while snacking on Alice's
Wonderland mushrooms. It's The Name of the Rose if Sean Connery's
character was a conglomeration of self-aware spores instead of a medieval
monk. It's The Spy Who Came In from the Cold if all the agents were also
testing psychedelic drugs and hung out in a postapocalyptic Emerald
City instead of Eastern Europe. More importantly, Finch is a really good
book-exciting, dark, suspenseful, and wonderfully weird."

"I can't remember ever reading a book like Finch. Audacious in
technique, and extravagant in imagination, it has the rare quality
of making the macabre poignant. In the midst of a disturbed and
disturbing narrative landscape, Jeff VanderMeer gives us deeply
sympathetic characters-especially Finch himself-who inspire us to
care about their flawed and tyrannized world. I'm impressed."

"Jeff VanderMeer's stunning Finch opens with a claustrophobic
interrogation and with a reluctant detective forced to solve a double
murder. Finch quickly expands beyond genres and beyond the edges of
Ambergris-its complex history, its many apocalypses-while remaining
a deeply affecting and personal story. Told in a pitch-perfect voice and
steeped in the unrelenting menace authentic to the best works of noir,
Finch is a wonderful, sad, brutal, and beautiful book. A tour de force."

"An uncompromising and boldly executed dark fantasy novel that is
as atmospheric as the best noir. Full of raw intensity, Finch explores a
brutal and believable phantasmagorical world."

-Tom Piccirilli, author of Shadow Season and The Cold Spot

"Trapped in a city of decomposing histories and an even more
moldering future, John Finch could be the hero of a Martin Cruz
Smith thriller, if that writer had taken to eating magic mushrooms.
Jeff VanderMeer's Finch presents the most frighteningly oppressive
setting since 1984, in a feverishly imaginative blend of pulp fiction
and high art. I could scarcely tear myself away from this, one of the
best novels I've read in years."

"With the razor-edged prose and bloody grit of noir, Finch works its
way to the core mystery of the city and gives us, ultimately, nothing
short of the apotheosis of Ambergris. I loved it!"

-Hal Duncan, author of Vellum: The Book of All Hours and
Escape from Hell!

"When all is said and done Finch will be among the best books of
the year. From the fantasy perspective Jeff VanderMeer has introduced
a new language into the lexicon with a clipped, telegraphic, hardboiled, James Ellroy-esque writing style that he bends to his will.
From the crime side of things he has created a new noir language
that retains the atmospherics of the past and weds them with the
throbbing claustrophobia of the city. Not only is Finch one of the
best books that I've read in years but it is also the book I've been
waiting to read for years without knowing it."

"Finch is a revolution disguised as a police procedural, an unholy
wedding of hard-boiled Hammett noir and Ballardian catastrophic
landscape, presided over by the ghost of Philip K. Dick. In Finch
the gun VanderMeer hung over the mantelpiece in City of Saints and
Madmen is finally fired-with apocalyptic, revelatory consequences
for the city of Ambergris and its people, human and gray cap alike.
As in the best noir detective stories, the double murder at the center of Finch is only one loop in a much greater knot tied in the world
itself; and as in the best apocalypses, if unraveling that knot resolves
many of the world's great mysteries, it does so only to open the way
to a new world wider and weirder than anything the old world's
inhabitants could have imagined."

"Jeff VanderMeer's hard-boiled detective novel plunges readers into
[a] vividly realized world of invasion, betrayal, and intrigue. A noir
tale with flashes of Chandler and The Thing, Finch is gripping from the
first page to the last. Stark and moving-it's amazing."

"Finch is a police procedural unlike anything you've read. Like Ed
McBain on acid, the story flows with wild images, sharp dialogue
and energy that keep you turning the pages. John Finch is a troubled
cop in a troubled time and a troubled place. If that doesn't make for
a great story, nothing does. Jeff VanderMeer shines as he creates a
world and crime in Finch, that will enthrall any reader."

-James 0. Born, author of Burn Zone and Field of Fire

"Fungal noir. Steampunk delirium. Paranoid spy thriller, quite
literally, on 'shrooms. There's enough nightmare and grit in Finch
to stock any urban fantasy fan's darkest imaginings for years to
come. But VanderMeer's visionary brand of imagining is closing
on Burroughs at his best. Devastated postwar cityscapes, desperate
temporary allegiances of the soul, and creatures dragged up out of
the worst withdrawal hallucination you can possibly imagine-like
something Len Deighton might have written at the top of his game,
if he'd dropped a tab or six beforehand. A clear signal, if one were
ever needed, that [VanderMeer] remains one of modern fantasy's
most original and fearless pioneers."

OTHER BOOKS BY THE AUTHOR

The Book of Lost Places

Why Should I Cut Your Throat?

Leviathan I (with Luke O'Grady)

The Thackery T. Lambshead Pocket Guide to Eccentric and Discredited

Best American Fantasy I (with Ann VanderMeer and Matthew Cheney)

The New Weird (with Ann VanderMeer)

FINCH Copyright © 2009 Jeff VanderMeer All quotes in Finch from Shriek: An Afterword are copyright © 2006 Tor Books and used by permission Names, characters, places, and incidents are the product of the author's imagination and are used fictitiously. Any resemblance to events or persons, living or dead, is coincidental. All rights reserved. No part of this publication may be reproduced or transmitted in any form or by any means, electronic or mechanical, including photocopy, recording, or any information storage and retrieval system, without permission in writing from the publisher. Requests for permission should be emailed to [email protected]

Interrogator: What did you see then?

Finch: Nothing. I couldn't see anything.

[howls and screams and sobbing]

I: Had you ever met the Lady in Blue before?

I: Heard her where?

F: On the fucking radio station, that's where.

F: It's her voice. Coming up from the underground. People say.

I: So what did you see, Finch?

F: Just the stars. Stars. It was night.

I: I can ask you this same question for hours, Finch.

I: There is no Lady in Blue. She's just a propaganda myth from the
rebels.

inch, at the apartment door, breathing heavy from five flights of
stairs, taken fast. The message that'd brought him from the station
was already dying in his hand. Red smear on a limp circle of green
fungal paper that had minutes before squirmed clammy. Now he had
only the door to pass through, marked with the gray caps' symbol.

Evil Season by Michael Benson
A Song Called Youth by John Shirley
Course of the Heart by Dawson, Cam
Darkness at Dawn by Elizabeth Jennings
The Lighthouse: A Novel of Terror by Bill Pronzini, Marcia Muller
Having It All by Jurgen von Stuka
Parents Who Kill--Shocking True Stories of the World's Most Evil Parents by Carol Anne Davis
Crimson by Tielle St. Clare
Johnny Swanson by Eleanor Updale
The Lemon Tree by Helen Forrester