Finding a Girl in America 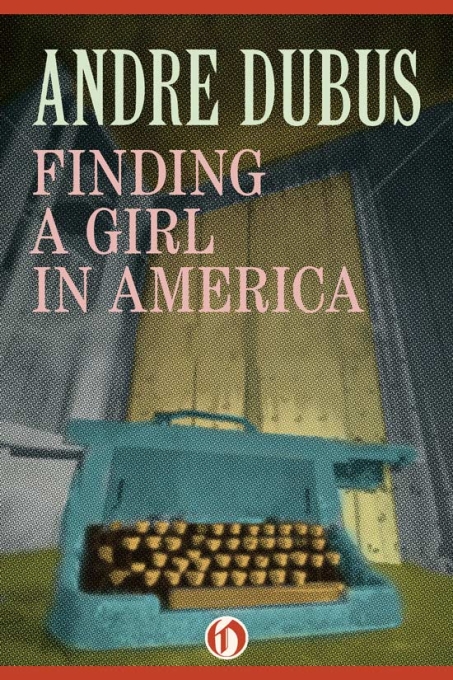 Finding a Girl in America
Ten Short Stories and a Novella

I am grateful to the John Simon Guggenheim Memorial
Foundation, The National Endowment for the Arts,
and the Artists Foundation of Massachusetts
.

One is never talking to oneself, always one is addressed to someone. Suddenly, without knowing the reason, at different stages in one's life, one is addressing this person or that all the time, even dreams are performed before an audience. I see that. It's well known that people who commit suicide, the most solitary of all acts, are addressing someone
.

Finding a Girl in America

A BIOGRAPHY OF ANDRE DUBUS

O
N THE AUGUST
morning when Matt Fowler buried his youngest son, Frank, who had lived for twenty-one years, eight months, and four days, Matt's older son, Steve, turned to him as the family left the grave and walked between their friends, and said: âI should kill him.' He was twenty-eight, his brown hair starting to thin in front where he used to have a cowlick. He bit his lower lip, wiped his eyes, then said it again. Ruth's arm, linked with Matt's, tightened; he looked at her. Beneath her eyes there was swelling from the three days she had suffered. At the limousine Matt stopped and looked back at the grave, the casket, and the Congregationalist minister who he thought had probably had a difficult job with the eulogy though he hadn't seemed to, and the old funeral director who was saying something to the six young pallbearers. The grave was on a hill and overlooked the Merrimack, which he could not see from where he stood; he looked at the opposite bank, at the apple orchard with its symmetrically planted trees going up a hill.

Next day Steve drove with his wife back to Baltimore where he managed the branch office of a bank, and Cathleen, the middle child, drove with her husband back to Syracuse. They had left the grandchildren with friends. A month after the funeral Matt played poker at Willis Trottier's because Ruth, who knew this was the second time he had been invited, told him to go, he couldn't sit home with her for the rest of her life, she was all right. After the game Willis went outside to tell everyone goodnight and, when the others had driven away, he walked with Matt to his car. Willis was a short, silver-haired man who had opened a diner after World War II, his trade then mostly very early breakfast, which he cooked, and then lunch for the men who worked at the leather and shoe factories. He now owned a large restaurant.

âI know. He was in my place last night, at the bar. With a girl.'

âCome back in for a drink.'

Matt looked at his watch. Ruth would be asleep. He walked with Willis back into the house, pausing at the steps to look at the starlit sky. It was a cool summer night; he thought vaguely of the Red Sox, did not even know if they were at home tonight; since it happened he had not been able to think about any of the small pleasures he believed he had earned, as he had earned also what was shattered now forever: the quietly harried and quietly pleasurable days of fatherhood. They went inside. Willis's wife, Martha, had gone to bed hours ago, in the rear of the large house which was rigged with burglar and fire alarms. They went downstairs to the game room: the television set suspended from the ceiling, the pool table, the poker table with beer cans, cards, chips, filled ashtrays, and the six chairs where Matt and his friends had sat, the friends picking up the old banter as though he had only been away on vacation; but he could see the affection and courtesy in their eyes. Willis went behind the bar and mixed them each a Scotch and soda; he stayed behind the bar and looked at Matt sitting on the stool.

âHow often have you thought about it?' Willis said.

âEvery day since he got out. I didn't think about bail. I thought I wouldn't have to worry about him for years. She sees him all the time. It makes her cry.'

âHe was in my place a long time last night. He'll be back.'

âThe band. He likes the band.'

âHe's tending bar up to Hampton Beach. For a friend. Ever notice even the worst bastard always has friends? He couldn't get work in town. It's just tourists and kids up to Hampton. Nobody knows him. If they do, they don't care. They drink what he mixes.'

âNobody tells me about him.'

âI hate him, Matt. My boys went to school with him. He was the same then. Know what he'll do? Five at the most. Remember that woman about seven years ago? Shot her husband and dropped him off the bridge in the Merrimack with a hundred pound sack of cement and said all the way through it that nobody helped her. Know where she is now? She's in Lawrence now, a secretary. And whoever helped her, where the hell is he?'

âI've got a .38 I've had for years. I take it to the store now. I tell Ruth it's for the night deposits. I tell her things have changed: we got junkies here now too. Lots of people without jobs. She knows though.'

âWhat does she know?'

âShe knows I started carrying it after the first time she saw him in town. She knows it's in case I see him, and there's some kind of a situationâ'

He stopped, looked at Willis, and finished his drink. Willis mixed him another.

âWhat kind of a situation?'

âWhere he did something to me. Where I could get away with it.'

âHow does Ruth feel about that?'

âYou said she does, she's got it figured out.'

He thought of her that afternoon: when she went into Sunnyhurst, Strout was waiting at the counter while the clerk bagged the things he had bought; she turned down an aisle and looked at soup cans until he left.

âRuth would shoot him herself, if she thought she could hit him.'

âYou got a permit?'

âI do. You could get a year for that.'

âMaybe I'll get one. Or maybe I won't. Maybe I'll just stop bringing it to the store.'

Richard Strout was twenty-six years old, a high school athlete, football scholarship to the University of Massachusetts where he lasted for almost two semesters before quitting in advance of the final grades that would have forced him not to return. People then said: Dickie can do the work; he just doesn't want to. He came home and did construction work for his father but refused his father's offer to learn the business; his two older brothers had learned it, so that Strout and Sons trucks going about town, and signs on construction sites, now slashed wounds into Matt Fowler's life. Then Richard married a young girl and became a bartender, his salary and tips augmented and perhaps sometimes matched by his father, who also posted his bond. So his friends, his enemies (he had those: fist fights or, more often, boys and then young men who had not fought him when they thought they should have), and those who simply knew him by face and name, had a series of images of him which they recalled when they heard of the killing: the high school running back, the young drunk in bars, the oblivious hard-hatted young man eating lunch at a counter, the bartender who could perhaps be called courteous but not more than that: as he tended bar, his dark eyes and dark, wide-jawed face appeared less sullen, near blank.

One night he beat Frank. Frank was living at home and waiting for September, for graduate school in economics, and working as a lifeguard at Salisbury Beach, where he met Mary Ann Strout, in her first month of separation. She spent most days at the beach with her two sons. Before ten o'clock one night Frank came home; he had driven to the hospital first, and he walked into the living room with stitches over his right eye and both lips bright and swollen.

âI'm all right,' he said, when Matt and Ruth stood up, and Matt turned off the television, letting Ruth get to him first: the tall, muscled but slender suntanned boy. Frank tried to smile at them but couldn't because of his lips.

âIt was her husband, wasn't it?' Ruth said.

Matt gently held Frank's jaw and turned his face to the light, looked at the stitches, the blood under the white of the eye, the bruised flesh.

âWhat's to stop him from doing it again? Did you hit him at all? Enough so he won't want to next time?'

âI don't think I touched him.'

âSo what are you going to do?'

âThat's not the problem,' Ruth said.

âI like a lot of people. What about the boys? Did they see it?'

âDid you leave her alone with him?'

âHe left first. She was yelling at him. I believe she had a skillet in her hand.'

Matt had been dealing with that too: at the dinner table on evenings when Frank wasn't home, was eating with Mary Ann; or, on the other nightsâand Frank was with her every nightâhe talked with Ruth while they watched television, or lay in bed with the windows open and he smelled the night air and imagined, with both pride and muted sorrow, Frank in Mary Ann's arms. Ruth didn't like it because Mary Ann was in the process of divorce, because she had two children, because she was four years older than Frank, and finallyâshe told this in bed, where she had during all of their marriage told him of her deepest feelings: of love, of passion, of fears about one of the children, of pain Matt had caused her or she had caused himâshe was against it because of what she had heard: that the marriage had gone bad early, and for most of it Richard and Mary Ann had both played around.

âThat can't be true,' Matt said. âStrout wouldn't have stood for it.'

âHe's too hot-tempered. He couldn't have taken that.'

But Matt knew Strout had taken it, for he had heard the stories too. He wondered who had told them to Ruth; and he felt vaguely annoyed and isolated: living with her for thirty-one years and still not knowing what she talked about with her friends. On these summer nights he did not so much argue with her as try to comfort her, but finally there was no difference between the two: she had concrete objections, which he tried to overcome. And in his attempt to do this, he neglected his own objections, which were the same as hers, so that as he spoke to her he felt as disembodied as he sometimes did in the store when he helped a man choose a blouse or dress or piece of costume jewelry for his wife.

âThe divorce doesn't mean anything,' he said. âShe was young and maybe she liked his looks and then after a while she realized she was living with a bastard. I see it as a positive thing.'

âIt's the same thing. Massachusetts has crazy laws, that's all. Her age is no problem. What's it matter when she was born? And that other business: even if it's true, which it probably isn't, it's got nothing to do with Frank, it's in the past. And the kids are no problem. She's been married six years; she ought to have kids. Frank likes them. He plays with them. And he's not going to marry her anyway, so it's not a problem of money.'