Finding Me (The Bad Boy Series) 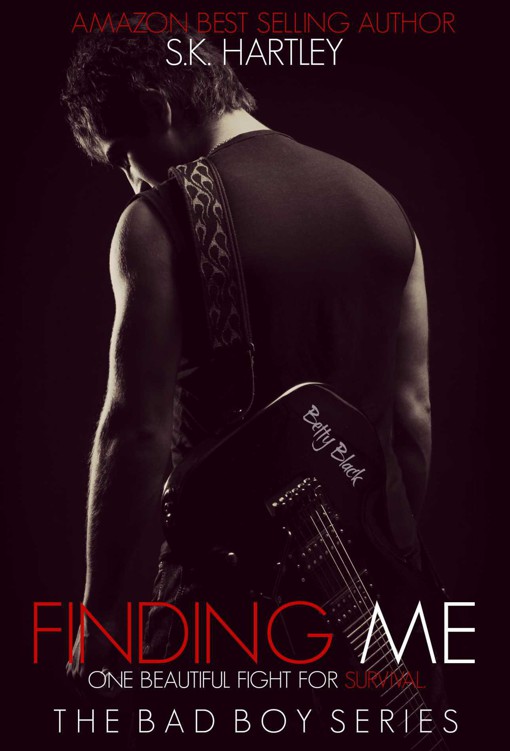 This is a work of fiction. Names, characters, places and incidents are either the product of the author’s imagination or used factiously and any resemblance to actual people, alive or dead, business, establishments, locales or events is entirely coincidental. Any reference to real events, businesses or organizations is intended only to give the fiction a sense of realism and authenticity.

All rights reserved. No part of this publication may be reproduced, stored in a retrieval system, or transmitted by any means – electronic, mechanical, photographic (photocopying), recording or otherwise – without prior permission in writing from the author.

Colbie Caillat – “I Never Told You”

Hunter Hayes – “Cry With You”

When you’re so blinded by grief, life tends to pass you by. It moves like with a force so fierce that time is no longer important. But time is something that only the most grief-stricken crave, just a second where you can be pulled out from under the blanket of perpetual hurt. Just to be given a glimpse of normality, a glimpse of what time is like when you don’t feel dead inside.

One would think that when life ends, another begins. But what happens if within that life, you never truly lived? Just, existed. We are placed on this earth for only God knows what. Sometimes, I wonder if even He knows. But we are placed here, expected to live. Expected to carry on, even when life becomes a bleak and disgusting place. Even when life is so full of death.

Death is a part of life. We accept life, breathe it in and celebrate it. But when death rocks our world, turning our happiness into hurt and grief, we fight it, unable to accept something that was engrained from the beginning. It’s a fact of life that is cruel, but undoubtedly necessary. Death is one of life’s biggest weakness, it's the one thing that will break even the strongest of people.

As long as death is a certainty, life will always be cruel. But right now, death seemed like one of the kindest certainties there is.

Losing a parent is traumatizing, it can rip your world right open. Destroying everything you once knew. I was supposed to be in the car with my father that night, I should have died by his side. Instead, I was left behind, trying to pick up the pieces of the chaos that I was far too young to really understand. My hero was gone, and now I'm coming face to face with the man who took him from me.

For some, their demons only live in their nightmares. Others are hidden so deep that you can’t see them, but for people like me, they were real. They are everywhere: in your nightmares, in your classes, sitting at your table while you eat. They don’t disappear, they don’t vanish. They stay with you, tormenting you, torturing you and making you remember exactly why you are so broken.

I am broken. I am haunted. I am living with my own demons every single day.

Where do yours hide?

The smell of stale whiskey permeates the air. It rolls my insides with a sharp jerk, disgusting and vile. It is strong enough to wake me from the dark recesses of the deep hole I had found myself lost within. It was all around me, my hair, my clothes and my skin. The smell was a reminder of a deep and permanent scar, one that could never be seen by the naked eye.

Then the pain. Pain. Everywhere. My head, my wrists, my legs. Everywhere. Everything ached and burned as I willed my body to move, but nothing was happening. I was paralyzed, but I couldn’t decipher what had stilled my body with such force. Suddenly, pain shredded through my chest, pulling all of the air from my lungs. But it wasn’t the pain that coursed through my limbs, it was pain I was all too familiar with. Deceit, betrayal, pain, fear. The pain was terrifying, no demon I conjured within the pit of hell compared to the pain I feel right now.

I couldn’t see. I couldn’t hear. I could feel the fear rolling off of my body, suspending in the air above me. Morphing quickly into shattering pain, ready to slice right through me without a moment’s notice. Torturing me like nothing I had ever felt before.

This is what it was like to have your world around you crumble and fall.

This is what it was like to feel unrelenting fear.

This is what it was like to have your nightmares become a reality.

I could feel the pain subsiding. Oh God. I wasn’t sure I was ready to face what kind of hellish existence I would wake up to. Numbness started to creep through my fingers, slowly inching towards my shoulders. My face was becoming weak, and I could no longer run my tongue over my dry bottom lip.

It was then I knew. I wasn’t going to be waking up.

My eyes became heavier as my ears rang in agony, slowly fading into something I could only describe as a gentle whisper. But the gentle whisper wasn’t soothing. It was pushing my fear higher as it became quieter with every passing second.

The darkness was coming, and I was its prey.

Searing pain splintered through my right cheek, followed a loud crack. The sound of the deep, vile voice penetrated my ear drums. Painfully reminding me exactly where I was. Hell. But my eyes refused to open, the slow-burning ache from each painful muscle protested as I tried to open them slowly. I didn’t know if it was from the pain or my body’s way of protecting me from what I would see.

The vile voice slithered into my ears again, causing bile to rise to the back of my throat. Burning from the acidity, and making my mouth fill with saliva. I knew that voice, the nickname, the smell of his breath against my skin. It was the disgusting creature that shattered my entire world ten years ago. And he was back to do it all over again.

My body decided it was no longer going to protect me. It wanted me to see everything. The bitter hell that was waiting for me.

My eyes finally opened far enough for me to see exactly what kind of misery I was about to fall into. Dark shadows covered every corner of the room. The light that was gently swinging from the ceiling was dim, causing each corner of the room to be completely hidden. My eyes tried to adjust to the unforgiving light, but my vision was blurred. Everything was glassy and misshapen, even my feet which were resting against the cold floor in front of me.

I tried once again to will my hands to move. I was desperate to rubs my eyes, in the hope I could try and get a better sense of my surroundings. But my limbs wouldn’t follow the demand, they were limp and lifeless. Everything from my shoulders down was numb, but my throat was constricting and causing so much pain that the numbness was a distant thought. I didn’t know what terrified me more: the knowledge that I couldn’t move my body, or that I couldn’t scream out if I had to.

“Wipe the blood from her face, boy! I want her to watch his.”

A figure suddenly appeared before me. I knew who it was, even with blood-filled eyes, I knew. I felt sick knowing that he was going to touch me, and I couldn’t do a damn thing about it. My skin crawled as I felt the rough texture of a towel brushing against the skin of my still-stinging cheek.

His voice no longer soothed me, it made me shudder in disgust. How could he do this to me? I wanted so much to tell him to rot in hell but my throat protested in pain as I opened my mouth to speak. Nothing was coming out.

I heard the quiver in his voice as his features finally came into focus. My eyes instantly landed on a large black bruise that covered most of his jaw line, running straight up the right side of his face and finishing below his eye. Making the once ocean blue depths so much darker, and more frightening than I ever thought possible.

“Water,” I croaked. My mouth was so dry, I wasn’t sure he had heard my plea.

“Just do as he says and I will try and get you some water, baby,” he whispered, his eyes looking anywhere but mine.

I inwardly cringed, his voice was completely broken. It was no longer the rough and gritty texture I had come accustomed to, it was a shredded whisper. A broken voice filled with pain. I wanted to yell and scream at him for having the nerve to call me ‘baby,’ but I didn’t know if my voice could withstand the painful effort. Instead I nodded my head. Bad move, even that fucking hurt.

He slowly wiped away the last of the blood from my eyes, allowing me to finally see in color.  My vision slowly cleared, but I quickly decided I wanted my vision to become blurry again as I took in the scene around me. The room was just as dark as it was before, but now a slither of light permeated the room from under the door to my right. The smell of damp quickly entered my nostrils as I took in the room, strong but not strong enough to overpower the repelling scent of whiskey. I slowly tried to swallow down the lump that suddenly formed in my throat, my muscles tightening painfully as I swallowed, as my eyes landed on a completely broken man.

Angel was crouched in front of me. His face swollen and bloodied from the large gash that sat above his right brow; for a millisecond I actually felt sorry for him. But then the anger seeped in. No, I will not feel sorry for the man who mended my broken heart, before shattering it without a thought. I stared with hard eyes to the man whom I once trusted with my heart, a man who I thought I understood. I closed my eyes as my mind flashed with memories of our time together.

I shook my head softly, sending a slow throb through my temples. I didn’t want to talk to him. Even if I could speak, what would I say? He must have taken the hint since I heard him move, but I soon regretted it when a deep and disgusting voice greeted me.

My eyes suddenly snapped open from the fierce command. His was seething and I really didn’t understand why. Why was I here? Why was I on the receiving end of Jack’s blatant fury? Nothing made any sense. What had Angel done?

As I looked into the eyes of the monster stood in front of me, it was then that I finally took in everything around me. I was propped up against a cold and moldy wall. My wrists bound behind my back and my clothes ripped and sodden. I had no idea how long I had been here…