Read Fire Down Below Online 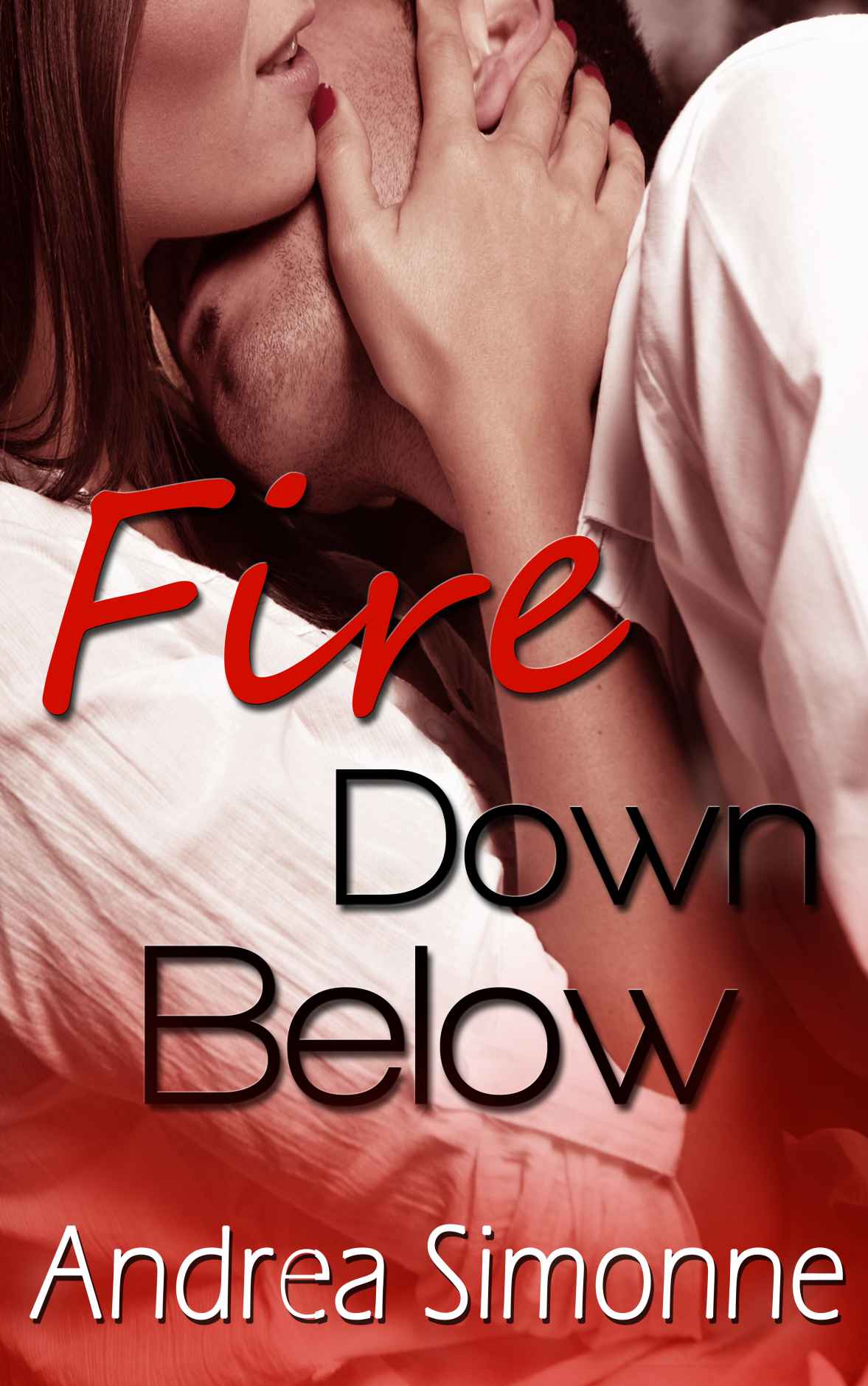 No part of this book may be
reproduced in any form or by any means, electronic or mechanical, including
photocopying, recording, or by any information storage and retrieval system,
without the express written permission of the author.

Publisher’s Note:
This is a work of fiction. Names,
characters, places, and incidents either are the product of the author’s imagination
or are used fictitiously. Any resemblance to actual persons, living or dead,
business establishments, events, or locales is entirely coincidental.

Forever glad I tied
my wagon to your star….

As soon as
I hear the words
“Kate, is that you?” I know I’m in trouble.

“Wow, Ben?” I stare at him. It’s a
peculiar shock seeing someone I was intimate with so long ago.

“I don’t believe it. How have you
been?”

“Good....” This is a quick trip to
the grocery store and I wasn’t supposed to see anyone I know, especially not an
old boyfriend. I glance down at myself, horrified at what I’m wearing. An old t-shirt
and baggy gray sweats. And, of course, I’m not wearing make-up. It’s the
perfect storm.

“What have you been up to?”

I wonder if pulling lip gloss out
of my purse would look freaky. Probably. “I work as a website developer for a design
group downtown. I assume you’re a lawyer now?”

Ben grins, shaking his head, and it
all comes back to me like a sweet scent I haven’t experienced in ages. His understated
laugh and the way I used to try and tease it out of him every chance I got. His
hair is shorter now though still blond. He spent a lot of time in the mountains
and his hair was always bleached by the sun. It used to intimidate me—Ben’s
comfort with the outdoors, his constant need to be outside doing something physical
whether it was hiking, snowboarding, or mountain climbing.

I’m basically the most un-athletic
person you’ve ever met.

“Nah, I didn’t go to law school. I
wound up taking a different route all together. I’m a geologist,” he pauses and
I have to admit, he’s still handsome, “listen Kate, I have to go. It’s really
good to see you.” He pulls his wallet out and hands me a business card. “Let’s
get together sometime and really catch up.”

“Sure.” I take the card and watch
him walk away.

It’s like experiencing a drive-by.
Peering down into my shopping basket, I cringe at all the junk food. Cookies,
brownies, chips, and a tub of vanilla ice cream. I groan. I must look like the
biggest loser on earth.

The only good thing is that I’m on
the lighter side of five, meaning that I’m on the skinny side of the same five
pounds I usually lose and gain back. It’s not much. It’s pathetic even. But I’m
claiming it.

For the record I don’t hang out every
Friday night watching chick flicks and eating brownies until I pass out into a
glucose coma. I have a life. It’s true I’m thirty-four and still single, but
I’m okay with it. I have a great job, a nice house, and I do a lot of interesting
things with my time.

The reason I’m at the store
dressed in sweats buying junk food on a Friday night is that my best friends, Suzy
and Lauren, are coming over for a pajama party. Once a month we get together to
eat junk food, sip cocktails, and hang out. I know they’re going to be
interested in my drive-by with Ben, not that either of them ever met him. I
became friends with Suzy and Lauren long after my relationship with Ben was
over.

“Something interesting happened to
me at the grocery store,” I tell them both, after dumping some chips in a bowl.

“Oh?” Suzy is measuring vodka into
a large glass pitcher. The Indian bracelet she picked up during her visit to an
ashram last summer tinkles as she stirs in the apple schnapps. Suzy is that
ultra-cool girl I always wished I could be.

“Hmm, that tone of voice sounds
like you met a man,” Lauren says.

I sit on my couch next to Lauren
and tell them about my chance meeting with Ben. “It’s been more than a decade
since we’ve seen each other. He’s a geologist now.”

“A geologist?” Lauren looks confused.
“That’s one of those guys that studies dinosaur bones?”

“No, you’re thinking of a
paleontologist.” Suzy comes over and hands each of us our drinks—appletinis. I
take a sip from mine. It’s strong, but tasty. “Geologists study rocks and
stuff. How long did you date him?” Suzy takes a seat in my leopard chair, a
garage sale find I reupholstered myself.

“Was is it serious?”

“It was. He even asked me to marry
him.”

“Really? I can’t believe we’ve
never heard about this guy.” Lauren puts her glass down to get a cookie. “I
thought we’d heard about all your relationships.”

Lauren chews her cookies. “Were
you in love with him?”

I’m quiet as I remember all the
strong emotions Ben once evoked in me. “Yes, I was.”

“Do you regret not marrying him?”

I take a sip from my drink before
I answer. “No, but I’d be lying if I said I never think about him. Ben was so conservative.
I always figure he wound up with some blonde cheerleader type.”

Lauren laughs. “Hey, no dissing cheerleaders.
We have feelings too, you know.” Lauren was, of course, a cheerleader in high
school. I met her at the hairdressers where she cuts my hair. She works for a
high end salon downtown and is one of  those people you feel like you can tell
all your secrets to which, I’m sure, is part of her success.

None of us are married, though
Lauren is divorced. She’s been single for about four years.

“Still,” Lauren says, thinking
things over. “He did give you his card and tell you to call. Wouldn’t it be
funny if after all these years he turned out be The One? Is he married? Was he
wearing a ring?”

“I don’t know. I was too much in
shock to notice if he was wearing a wedding ring.” I let out a deep breath that
I didn’t realize I was holding. I feel like I haven’t breathed since I saw Ben
a few hours ago. Was he wearing a ring? I didn’t think so. “Our relationship didn’t
end well. He wasn’t supportive of me at all. When I told him I wasn’t ready to
get married, he dumped me without even discussing it.”

“I was really hurt by the whole
thing.”

Suzy picks up the glass pitcher. “Sounds
like you made the right choice not marrying him,” she says as she walks over to
top off each of our drinks.

Lauren turns to me. “You probably
saved yourself a ton of heartache. I mean, you wouldn’t want to go through what
I did with The Toad.” The Toad being her ex-husband Todd, whom she discovered
was cheating on her when she found a pair of used panties in her bed that
weren’t hers. I know. Yuck.

“I’d lose his number if I were
you,” Suzy tells me. “If he had issues then, it’s unlikely he’s changed much.”

“I’m sure you’re right.” I pull
Ben’s card out of my pocket and study it curiously.

The problem is just seeing his name
again is making my heart pound.

I met Ben
during my
freshman
year of college. He was handsome, but not someone I considered dating, since I
usually went for the brooding artist type and he was too sunny and normal.

Mostly we hung out during class,
cracking jokes or talking about some of the bands we liked. He used to make playlists
for me and sometimes we’d run into each other on campus and go sit and have
coffee. Ben dated a few different girls—perky sorority types, while I was more Goth,
so I knew he wasn’t interested in me romantically. By the end of freshman year
I decided to drop out of school and lost all contact with him.

I didn’t see or think about Ben for
almost three years. Then one day, as I was working as a barista in a trendy coffee
shop in Seattle called Cafe Nin, he came in and ordered a latte.

It turned out he was working at The
Zombie, a bar up the street. He’d graduated from college with a political science
degree, but had decided he wanted to write a novel and was renting an apartment
nearby. I was surprised, since he never struck me as the creative type. His
parents were well-to-do and apparently weren’t happy with his decision. I laughed
when he told me how his mother tried to get him into therapy, convinced he was
having a nervous breakdown. He told me he only wanted to try something new. I
understood completely since I was doing the same thing, except I was painting.

Ben started coming into where I
worked every day before his shift at the bar. I never thought it was anything
other than friendship. Mostly we sat around joking with each other, just like we
did years ago.

“You know we’re both doing the
same job,” he said, sitting at his usual table outside, drinking the latte I’d
made him. It was sunny and warm, the perfect day for doing nothing, except I
had to work. Luckily my job allowed me to sit and chat until the next drink order
needed to be filled.

“Barista.” He pointed at me. “And
bartender.” He pointed at himself. “You’re slinging coffee and I’m slinging
alcohol, but it’s basically the same. We’re fueling people’s addictions.”

“I suppose you’re right. Although I’ll
bet you’re paid more than I am.”

“Yes, but you get to drink free
coffee all day.”

“And you get to have pretty girls
flirting with you all night. The only guys coming in here aren’t exactly checking
me out, if you know what I mean.”

Ben smiled. “I suspect you do all
right. So where is your boyfriend anyway? How come I never seen him around?”

“I’m currently boyfriendless.” I explained
how I’d split up with someone, so I was taking a break for a while.

“Yeah, I broke up with someone recently
too, so I’m not looking for anything either.”

He leaned back in his chair, checking
out all the hip people streaming by on the sidewalk. This was a funky part of
town with plenty of facial piercings and ink. We watched as a girl with magenta
hair strolled past, walking a small dog, enveloping us in a cloud of patchouli.

“Do you want to go to see a movie
tonight?” he asked.

I got up to go back inside, since
a line of people had formed by the front counter. “Sure, pick me up after work,
okay? I get off at six.”

“Sounds good.” He drank the rest
of his coffee and then grabbed his helmet off the table. I watched as he went
to retrieve the mountain bike he’d locked to one of the racks nearby. It struck
me how incongruous it was to see Ben here in the middle of all this.

He’d said he wanted to try something
new, though at the time I never imagined his idea of something new included me.

Thicker Than Blood - The Complete Andrew Z. Thomas Trilogy by Crouch, Blake, Konrath, J.A., Kilborn, Jack
The Magdalen by Marita Conlon-McKenna
The Rousing: A Celtic in the Blood Novella by Jess Raven, Paula Black
The Breath of Night by Michael Arditti
The Youngest Hero by Jerry B. Jenkins
Dead Island: Operation Zulu by Allen Gamboa
Fyre by Angie Sage
Redemption of Thieves (Book 4) by C.Greenwood
The Killing Sea by Richard Lewis
The Killing Kind by Bryan Smith