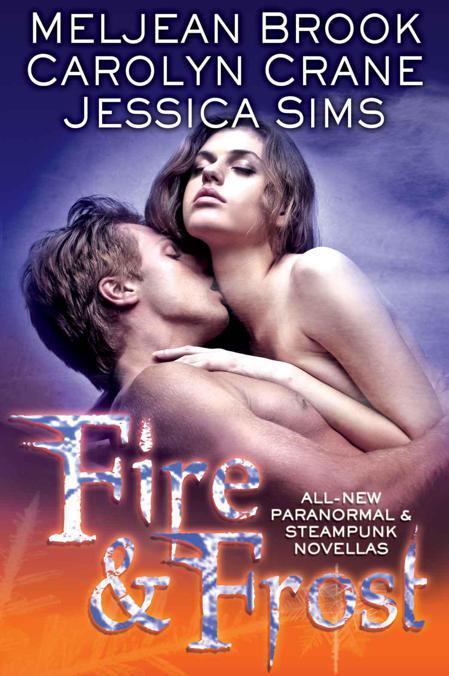 Excerpt from
Vixen
by Jessica Sims

Excerpt from
Frozen
by Meljean Brook

Other Works by Jessica Sims

Other Works by Carolyn Crane

Other Works by Meljean Brook

ESTRELLA SAT IN THE WAITING room of her alpha’s auto repair garage and tried not to throw up her lunch.

It was just nerves causing her stomach to churn, but that didn’t help matters. She perched on the edge of the plastic chair, sipping water from a Styrofoam cup and trying to distract herself from the sense of helplessness she felt.

A shadow fell over her. A pair of jeans and workman’s boots moved into her line of vision, and Estrella almost choked on her water. She looked up and saw Vic towering over her seat. Massive, hulking Vic, who never failed to intimidate despite the fact that they were both the same height — six foot two. She always felt small around Vic, though. Maybe it was the immense breadth of his muscles or his thick arms sleeved with tattoos. Or maybe it was the fact that his usual expression seemed to be a displeased frown when she was around.

That frown was on his face at the moment as he wiped his fingers with a greasy rag.

“Morning, Estrella,” he said casually, his attention more on his hands than her face. “You wanted to see me?”

She got to her feet, ignoring the eyes that glanced in her direction when she unfolded her legs and stood to her full height. She was a tall woman, healthy and muscular thanks to her liger background, but she wasn’t dainty like human women. She never would be. Most men were intimidated by her size, which made it difficult to get a date. Add in the liger thing and she seemed doomed to live a life of solitude.

Well, until now
, she thought, her gut clenching again.

Of course, why she was obsessing over her appearance at a time like this made no sense. It just went to show how incredibly distracted she was by…her situation. Oh, god, she had a
situation
.

“Yes. I did. I…need to talk.” When he continued to look at her with that patient-only-because-I-have-to-be gaze, she added, “In private. Please.”

He gestured to the back office and she headed there.

Estrella didn’t come in to visit Vic often. The were-tigers were a more loosely-formed clan of shifters than most, but they still got together several times a month for meetings and just general bonding. Being the only liger in the vicinity — hell, in the entire state — she didn’t exactly ‘blend’ with the rest of her temperamental, fierce clan. She was only half tiger, but she fit in more with them than with the lions, who didn’t welcome her at all. But even at the gatherings, Estrella hung back, quiet and watchful. The tiger clan didn’t mind her around as long as she didn’t cause trouble.

And she went out of her way to not cause trouble.

Vic’s office was a small, glass-walled room at the back of the shop. It boasted a desk covered in scattered, smudged paperwork, a fan, and the world’s oldest computer monitor. He moved to the far side of the desk and sat. “Let’s make this fast. I’ve got someone dropping off an engine rehaul, and I’m going to need the time.”

“This won’t take long,” Estrella said nervously, sitting down in the chair across from him.

He picked up a pencil, grabbed a stack of paperwork, distracted. Vic waved a hand in her direction, indicating that she should begin.

She swallowed hard. The words stuck to the roof of Estrella’s mouth, and she stared at him mutely as he checked over a purchase order. His dark hair was sweaty at the temples but attractive. He was tanned, and his jaw (and neck) were wide. He looked like a big, mean bruiser. He wasn’t, but that didn’t make her feel any better.

When she didn’t speak, he glanced up and gave her an impatient look. “Well?”

Now or never. She forced the words out of her throat. “I’m going into heat.”

Estrella didn’t wince. She didn’t even flinch. She just sighed, heavily. “I know.”

He rubbed his jaw for a few minutes, saying nothing and clearly trying to compose himself. “Well. This wasn’t the conversation I was expecting to have this morning.”

Now she was genuinely confused. “What were you expecting this to be about?”

“I was expecting,” Vic began, then cleared his throat and continued, “to hear that you’d taken an interest in someone in the clan.”

“So am I. They haven’t shown the slightest interest in me, and you know it.”

“No, I’m
liger
. Big, overgrown crossbreed of lion and tiger, remember?” She’d never forgotten that she didn’t feel as if she belonged with the tigers. They’d been welcoming enough, but wary, and she suspected that the only reason they’d been open to her joining them was because she was female and they only had one other in their clan. But then again, she was sterile. All ligers were more or less ‘mules’ because of the crossbreeding, and they couldn’t have children. At least, that was what she had always been told.

So why bring a sterile woman into a clan? It didn’t make sense, and she’d never been able to figure it out, hence her unease around the other tigers. If she wasn’t mate material because she was barren, what was she? Just a pair of bouncy tits to have around to look at?

Not an endearing thought.

Not that it mattered. Most of the tiger clan? Just not her type. They were too cocky, a little too confident, and with the exception of Vic, she was pretty much the only one over six feet tall.

She never knew how to interpret Vic, either. He always seemed to be scowling and bad tempered about something, but he was still courteous to her. It was a mystery.

“Big, overgrown,
sterile
crossbreed, I could have sworn,” Vic drawled. “You sure about this heat thing?”

“I know how to interpret my own body, thank you,” she said, trying to keep the growl out of her throat. “I’ve been feeling…things. Different things. It doesn’t take a genius to figure out what it’s leading up to.” Things like waking up with her nipples erect, her hands between her thighs, and a pulsing in her blood. Things like her libido revving at the sight of a man’s tight ass. Things like a constant, all-over sensitivity to her skin.

And she was moody as hell. She bared her teeth at him in annoyance.

He regarded her with a stern expression. “Feeling things?”

He rubbed his jaw again, looking for a moment as if he wanted to smile, then thought better of it. “I don’t smell anything yet. How long do you think you’ll have? We need to make plans.”

Her face turned bright red. This was the conversation she’d come here to have, but at the words “
I don’t smell anything yet
” her mind had frozen. Was he going to
smell
her when she went into heat? Ugh. What did it smell like? God, she didn’t want to know. “I’m not sure. This is my first time in heat.”

Vic set down the broken pencil and linked his hands behind his head, all enormous biceps and tattoos. Her mouth went dry at the sight. Vic had such big, strong arms that he clearly worked out. A lot. Most of the tiger clan tended towards bulk, but Vic carried it like an Olympian. She…liked all that muscle. Quite a bit.

Lord knew that if any man flexed in front of her, she’d drop her panties to the ground in a flash, unable to control herself until her heat passed. It sucked.

“Are you going to have it?”

A momentary flash of annoyance crossed his face. “You’re going to be in heat,” he said, words crisp and succinct as he sat forward, hands moving to the desk (and no longer flexing so attractively). “Heat means one thing — you’re fertile. Are you going to have the child?”

“I…don’t know.” She raised a hand to stop him. “Before you can give me the spiel about how having a child has the potential to impact the entire clan, I want to remind you that it’s my uterus, and I’ll do what I want with it — or not. If I decide to have a child, it’s going to be my idea, not anyone else’s.”

He scowled. “I don’t care what you do. I just need to know so we can plan accordingly.”

“Oh.” That had gone a little smoother than she’d thought. For some reason, she’d anticipated…a protest. Shifter children were rare enough that an unattached female going into heat was a big deal. A heat only happened a few times in a shifter’s life, and each time was impossible to predict. A woman would have no way of knowing how many times she’d go into heat in her life. And if she used birth control and rode out the heat? It was impossible to predict if she’d ever go into heat again.

It was a gamble. Worst of all, Estrella was single. She didn’t even have a romantic interest. All she had were some rather short tiger clan cousins and…Vic.

“If you decide to have this child, do you have a father in mind? Tiger, I hope?”

“It doesn’t have to be tiger,” she protested. “I just want someone that will love the child and care for it.”

He gave her a piercing look. “Anyone in the clan would be thrilled to become a father and to take you as a mate.”

She rolled her eyes. “If I decide to get pregnant, I’m going to pick the man I like the most, since we’ll be tied through the child. I don’t want to leave things to chance and just assume that the right guy will be around when the heat hits me. If I do this, it’s going to be planned in advance. Right guy, right place, right time. I want my baby to be bred off of the best possible father. Just because I’m going into heat doesn’t mean I can’t have control of this.”

This time, his mouth quirked, as if he were amused by her declaration. “It sounds like you’ve already decided.”

“Maybe,” she said defensively. “But if I can’t find the right guy, I’m not going to go through with it.”

“You’ll need someone,” he pointed out. “Pregnancy or not, the heat’s still going to happen.”

Her face flushed. “Yes, I know. Someone’ll do regardless.” And if it wasn’t someone she could desire and respect, well, a lot of alcohol in advance would probably do the trick. There was no way around the situation—it had to be dealt with.

“I’m here to help you, Estrella. Know that.” The look in Vic’s dark eyes was intense. “You’re part of my clan and we take care of our own.”

“Thank you. I appreciate that, Vic.”

“How much time do you think we have? Honest answer. Think you can hold out until the next week?”

Well. In actuality, that didn’t sound so bad. But she knew that was just the heat talking. “Thank you, Vic. I appreciate it.”