Read Fire in the Blood Online

Fire in the Blood 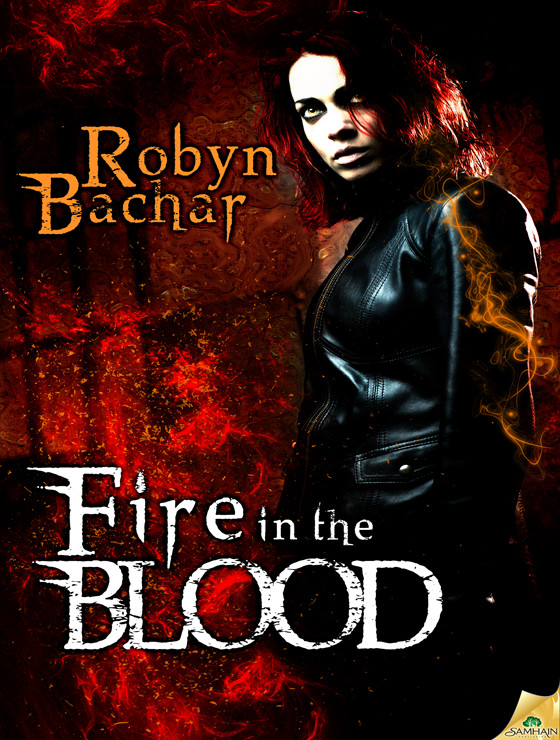 To Brian, Devin, Karrin and Rebecca, who loved this book; to my family, especially my parents, who are my biggest fans (even though my mother is convinced that I killed her in
Blood, Smoke and Mirrors
); and to my critique group, my RWA chapter and my editor, Suz, who all make me a better author.

And, last but not least, to my fabulous BFF Diana, who took me in when I needed shelter, supported me through some epic badness and inspires me every day. Thank you.

alchemist
: a magician who specializes in brewing potions. The source of the magic is not the ingredients themselves—though they can help add an extra kick—but the alchemist who infuses her own magic into a potion. Alchemists are the most mercenary magicians because their magic is the most marketable.

chronicler
: a librarian who has joined the Order of St. Jerome and become a vampire. Chroniclers undergo a ritual that was originally stolen from the necromancers and altered. It stops their aging and places the body in a sort of stasis. Like the original ritual, there is a chance of failure, and the odds of survival are only thirty to forty percent. To survive, chroniclers ingest magic by consuming the blood of living magicians and often take blood as payment for their services. Chroniclers are responsible for recording magician history and archiving spells and magical research.
See also
Order of St. Jerome.

Council of Three
: a magician governing body. Every type of magician is monitored/ruled over by a Council of Three, as are faeries. There are levels to councils—regional, national, global, etc.

demon
: an entity native to one of the hell realms. Unlike other magical creatures, demons cannot be killed, only banished back to their realm. However, if a magician travels to that realm, he or she can kill the demon there. Physical attacks on people in “haunted” houses are caused by demonic entities (ghosts can’t physically interact with their surroundings). Demons come in a variety of shapes and sizes due to the difference in hells—some embody sins or vices, others natural elements like faeries, and some are just outright nightmarish bogeymen.

faerie
: one of the magical races formerly native to Earth. Faeries are extremely long-lived, but are not immortal. In many ways they are embodiments of magic, the different clans representing different aspects and elements of it. Faeries left Earth and created their own world after the extinction of the elves, but that act left them damaged as a species, unable to reproduce with each other. A full-blooded faerie has not been born since the formation of their world. Many magicians owe their magic to their faerie heritage.

favor
: a magical debt owed to a demon or summoner. Favors are no small matter, and are granted in exchange for powerful magic. A mark representing the favor is tattooed into the skin of the magician who owes it, and the mark disappears once the favor is repaid.

guardian
: an enforcer of magical law and order. They work for the higher powers to ensure criminals are apprehended, but councils are responsible for judging guilt or innocence. Guardians can be called on to execute the guilty, if necessary.

hunter
: an individual or group who hunts and kills magicians. Some hunters have personal reasons, such as having a family member killed by shapeshifters. Others do it for sport, believing magicians to be challenging prey.

kinslayer
: a magician or magical being who has murdered a member of his/her family. Magicians have always been outnumbered by straights, and after the elves became extinct great importance was placed upon preserving the remaining races. Killing other magicians is frowned upon, but it is considered a great crime to kill a member of one’s own family. Kinslayers are often socially ostracized by other magicians.

librarian
: a magician specializing in history and research. Because they study a variety of magics, librarians can cast any type of spell. However, when a librarian casts them, these spells are less powerful. Example, a sorcerer’s fireball is less like a softball and more like a golf ball if a librarian casts it. Most librarians aspire to serve the Order of St. Jerome. Though few are chosen to become chroniclers, many work as servants or assistants.
See also
chronicler; Order of St. Jerome.

necromancer
: a practitioner of death magic. Necromancers specialize in dealing with ghosts, zombies and other icky dead things. When a magician becomes a necromancer he is apprenticed to a master, and once his training is complete he undergoes a ritual to become a master himself (
see
vampire). This ritual is risky, with a roughly fifty percent chance of failure. Master necros build up bad karma for jamming a spoke in the wheel of life, and when a master dies horrible things happen to his soul.

oathbreaker
: a magician known to have broken an official oath. Sworn oaths are taken very seriously in magician society. If a person swears to do something, such as fulfill a quest or take on a sacred responsibility, failure to uphold the oath can result in social ostracism. Oathbreakers are considered untrustworthy, and few people agree to deal with them.

Oberon
: an ambassador responsible for overseeing relations between Earth and Faerie (if the position is held by a woman, she is referred to as a
Titania
). An Oberon or Titania maintains balance between faerie and magician society within a region on Earth, ensuring that faeries do not cause too much mischief within that region, and that the local magicians do not abuse their access to Faerie.

Order of St. Jerome
: the organization of chroniclers. The order was founded by a group who decided that having immortal librarians to protect magician records and be able to remember stories and events was necessary to maintain a record of magician history. The necromancers were furious that their ritual for creating immortality had been stolen, but a war between the two factions was prevented when the order agreed not to become involved in magician politics. The group has gone through many names over the years, but St. Jerome is the most recent and longest lasting.

seer
: a magician who can read auras and receive prophetic visions. Seers are the rarest kind of magician, with only a handful in the entire world. Their visions center around the person they’re reading or a traumatic event in an area. Seers are not mediums, and though they can get a feeling for the energy in a house, they don’t communicate with the dead—because that’s necromancer territory. Seers are particularly adept at locating a person’s soul mate.

shadowspawn
: a faerie who has been expelled from Faerie for evil acts. Though faeries have a high tolerance for mischief, they do have limits as to the sort of crimes allowed in and outside of Faerie. Faeries convicted of acts of great evil are expelled from Faerie, banished to live on Earth.

shadow realm
: a hell dimension. The shadow realm exists in an eternal state of twilight, where the landscape, buildings and demon inhabitants are made of darkness. Vampires and shadowspawn faeries use the shadow realm as a shortcut to travel between places on Earth that are steeped in darkness.
See also
shadowspawn; shadowstep; vampire.

shadowstep
: a method of transportation used by master necromancers, chroniclers and shadowspawn faeries. To keep vampires from causing mayhem in other worlds, the higher powers closed the doors to them—except for the hell dimensions. Shadowspawn faeries and vampires brave or foolish enough to make the trip can travel through the shadow realm.

shapeshifter
: a magician infected with wild magic and possessing an animal spirit. The most common shifters are canine, with the rest made up of feline, ursine, equine and avian. Shifters coexist with their animal, almost like having a split personality, and can shift into a hybrid animal/human form and the full animal form. Many shifters, particularly predators, revel in their beast, which has led to shifters being considered subhuman by other magicians and even hunted by sorcerers.
See also
wild magic.

sorcerer
: a magician specializing in elemental magic typically destructive in nature. Like witches, sorcerers use elemental magic, and tend to focus on one element in particular. In general their magic does not require spoken spells or physical ingredients; large, formal rituals are rare occurrences. Sorcerers are the magicians most likely to become necromancers, as well as being most likely to be kept as a necromancer’s pet.

soul mate
: a soul’s perfect match. Soul mates are not always romantic partners and can be represented in other close relationships, such as best friends. Because souls are reincarnated, a person can meet his or her soul mate in several lives, or none at all. Also, due to free will soul mates are not guaranteed true love or a happily ever after. Seers can be helpful in finding a person’s soul mate.

straights
: a slang term for nonmagicians. There are many other terms, such as
voids
.

summoner
: a magician dealing in summoning, binding and/or banishing magical entities. Summoners capture and bind their prey, trading magical favors or power in exchange for release. They mainly deal in demons, but with the right information, such as a True Name, they can deal with any living entity—elementals, imps or faeries. Dealing with demons is risky business and wears on a summoner over time. They begin to take on demonic physical traits and may even become demons themselves, at which point they are often pulled into a hell dimension that becomes their new home.

Task Force Prometheus
: a secret government project researching magicians and magic; also known as
hunters
or
Methees
(slang). While looking for terrorists, the government uncovered the hidden society of magicians. A top-secret task force was formed to study magic-users, to find the source of their magic in order to weaponize it.

Titania
: an ambassador responsible for overseeing relations between Earth and Faerie (if the position is held by a man, he is referred to as an
Oberon
). An Oberon or Titania maintains balance between faerie and magician society within a region on Earth, ensuring that faeries do not cause too much mischief within that region, and that the local magicians do not abuse their access to Faerie.

True Name
: the name of a magician or magical being that has power over that person. In modern society, names aren’t given as much weight and a magician’s True Name holds little to no power. It is considered rude to use a magician’s True Name, especially without permission. The names of older beings, such as demons, faeries and vampires, can still hold power and be used against them. Faeries in particular guard their True Names jealously and go by a number of pseudonyms.

vampire
: a slang term for a master necromancer or chronicler.
Vampire
is considered rude by many older master necros and chroniclers. They do, however, share some traits with the popular vampire myth. They must feed on the blood of living magicians—specifically on the magic within the blood—to maintain their existence. Most keep spouses, partners or “pets” as blood sources. It is extremely rare for a vampire to kill during feeding (when you’re done milking the cow, you don’t slaughter it).