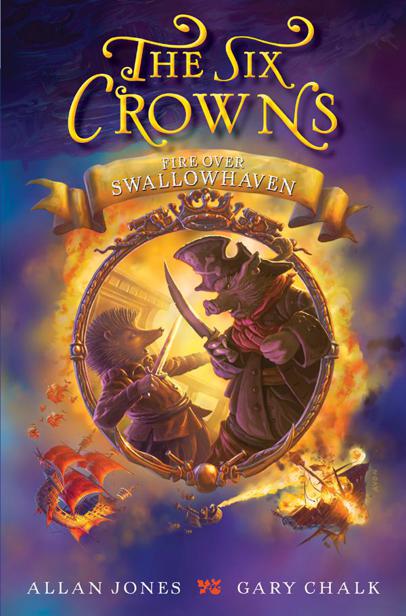 The Six Crowns:
Fire Over Swallowhaven 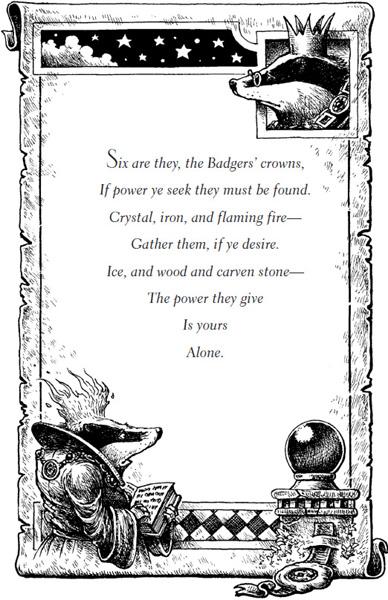 About the Author and Illustrator

T
he legends say that once, long, long ago, there was a single round world, like a ball floating in space, and that it was ruled over by six wise badgers. The legends also tell of a tremendous explosion, an explosion so huge that it shattered the round world into a thousand fragments, a vast archipelago of islands adrift in the sky. As time passed, the survivors of the explosion thrived and prospered and gave their scattered island homes a name—and that name was the Sundered Lands.

That’s what the legends say.

But who believes in legends nowadays?

Well…Esmeralda Lightfoot, the Princess in Darkness does, for one. According to Esmeralda, the truth of the ancient legend was revealed to her in a reading of the magical and ancient Badger Blocks.
And her reluctant companion, Trundle Boldoak, is beginning to believe, as well—especially as they have already found two of the crowns. They have also found a new friend to accompany them on their quest—a lighthearted minstrel by the name of Jack Nimble.

But there is a problem. Someone else is also hunting for the six crowns. His name is Captain Grizzletusk, and he’s the meanest, bloodthirstiest, wickedest pirate ever to sail the skies of the Sundered Lands. And just to make matters even worse, Grizzletusk and his murderous pirate band are being controlled by none other than Millie Rose Thorne, Queen of All the Roamanys, and—horrifyingly enough—Esmeralda’s very own aunty.

No wonder our heroes are on the run! 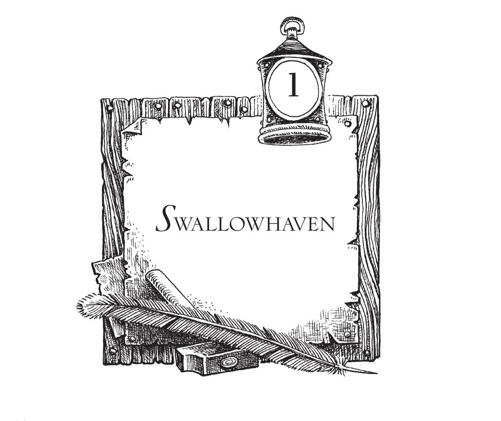 “K
eep hold of that feather, Trundle!” yelled Esmeralda. “If it gets away from you, we’re done for!”

“I
am
keeping hold of it,” Trundle replied, between gritted teeth. “It’s not easy, you know! The thing’s got a mind of its own.”

He was quite worn out with the effort of hanging on to the long red phoenix feather. It strained forward over the prow of their skyboat, the
Thief in the Night
, twitching and twisting and squirming in his aching
paws as if it were desperate to break free and soar away into the night.

With the help of a friendly hedgehog called the Herald Pursuivant—or Percy for short—Trundle, Esmeralda, and their companion Jack Nimble had discovered the feather in an old clock tower in the ancient city of Widdershins, coiled up in a metal orb attached to the Iron Crown of the Badgers of Power.

Jack had recognized the feather at once and sang them the song of the lovely and glorious phoenix bird, which, if its feather were returned, would tell a great secret. Of course, Esmeralda was instantly certain that the secret of the phoenix must be the clue that would lead them to the third of the Six Crowns of the Badgers of Power: the Crown of Fire.

And so, leaving the Crystal Crown and the Iron Crown for safekeeping with Percy, they had set off to find the phoenix. According to legend, the wonderful bird lived inside a volcano on a desolate and far-flung
island at the farthermost reaches of the Sundered Lands. 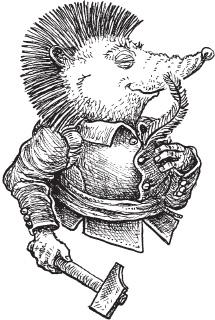 Well, of course he does, Trundle had thought the moment he heard this. It would be too
easy
if he lived somewhere normal!

And so they had set off for the fiery mountain home of the mythical phoenix bird. It seemed to Trundle that the farther they went, the more impatient the feather became to find its way home. But their trim little skyboat was
already
whizzing along as fast as possible. Esmeralda was at the tiller and Jack was racing to and fro with the boom, the pair of them expertly catching every last breath of wind so that the sails were stretched almost to the bursting point, and the slender hull went zipping through the night like an arrow from the bow.

“If you can’t hold that feather any longer,” puffed Jack as he hauled on the thrumming ropes, “why don’t you try nailing it to the mast?”

“Brilliant notion!” exclaimed Trundle. He chose not to add that it was a pity Jack hadn’t thought of that a while ago, and saved him cramped paws and strained muscles from the effort of keeping the rebellious feather under control.

Needing both hands free for this task, Trundle unbuttoned his jerkin and shoved the wriggling feather inside. Buttoning himself up again, he rummaged in the pile of goods and provisions that was heaped up in front of the mast.

“What are you playing at, Trundle?” called Esmeralda.

“Oh, for heaven’s sake!” exclaimed Esmeralda. “This is a serious quest, Trundle. Stop being silly!”

Stifling his giggles, Trundle managed to find a hammer and a nail. He took out the feather, held it against the mast, and with a few quick whacks drove a nail into the wood and bent it over so that the shaft of the feather was trapped underneath.

Cautiously, he let the feather go. It quivered and shook itself like a dog coming out of the water. For a moment, Trundle got the distinct feeling the feather was looking reproachfully at him—if such a thing were possible. Then it seemed to gather itself again and stretched out as taut as a bowstring, pointing forward into the starry sky.

IGMS Issue 29 by IGMS
The Droitwich Deceivers by Kerry Tombs
The Hidden History of the JFK Assassination by Waldron, Lamar
The Killing Sea by Richard Lewis
Eastern Inferno: The Journals of a German Panzerjäger on the Eastern Front, 1941-43 by Christine Alexander, Mason Kunze
Angelmaker by Nick Harkaway
The Billionaire's Bedside Manner by Robyn Grady
TRUTH by Sherri Hayes
Lady Almina and the Real Downton Abbey by The Countess of Carnarvon
Break Me by Evelyn Glass