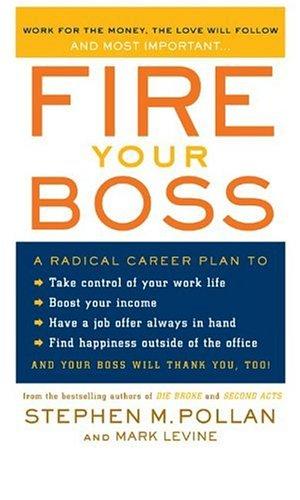 who fired her boss and hired herself years

before we thought of it.

who always knew she was the boss.

PART I
THE FIRE YOUR BOSS PHILOSOPHY

1: The Job of Your Dreams

2: Fire Your Boss…and Hire Yourself

3: Kill Your Career…and Get a Job

6: No One Hires a Stranger

9: The Life of Your Dreams

10: Firing Your Boss When You’re Unemployed

12: Firing Your Boss in Another Industry

Your vision will become clear only when you can look into your own heart. Who looks outside, dreams; who looks inside, awakes.

YOU CAN TAKE
charge of your work life.

Are you like the office manager wishing she could spend more time at home caring for her children than at the office catering to a juvenile boss?

Are you like the regional manager worrying that the new hotshot vice president of sales will fire him two years short of his daughter’s finishing college?

You don’t have to accept your current work situation. You can be in control of your job and your stream of income so you’re never again subject to the whims, prejudices, moods, or circumstances of your so-called boss. It doesn’t matter whether you’ve been on the job for forty years or forty days; it’s never too late or too early to seize control of your work life. It doesn’t matter if you’re a stock clerk at a video store or the chief financial officer of a movie studio; everyone who’s employed can take charge of his or her own work life. I won’t lie to you: becoming boss of your own life is neither quick nor easy. The program I outline in this book will require hard work and real thought. It’s not something you can do in a weekend. But, believe me, it’s worth the time and effort.

Being master of your own work life leads to incredible changes in your life. You’ll earn more money if that’s what you wish. You’ll feel more secure if that’s your goal. You’ll be able to pursue whatever brings you the most joy and satisfaction, whether it’s having a catch with your son, puttering around in the garden, or serving meals to the needy. You’ll end up with the job of your dreams, and that will give you a leg up on living the life of your dreams. Just ask Sydney Carton.

Sydney is now sleeping well at night. For years, however, he lay awake worrying. He worried about the state of his career; whether he’d ever achieve his life’s dreams; how he’d pay for his daughter’s college education; and whether he and his wife, Lucy, would ever be able to retire. He worried about when they’d actually get to spend some quality time together as a family with all the hours he and his wife were working. But Sydney is not worried anymore. His income is fine — he’s not an NBA first-round draft pick, but he’s doing okay. His job is as secure as it can be in today’s world because his boss depends on him more than ever. And even with that security, he’s spending less time at work and more at home. He has taken up photography again. He and Lucy have rekindled their romance, thanks to being able to spend time together. And he’s being the kind of father he always wanted to be. Sydney turned his work life around…and so can you.

You can find a new job that pays an income large enough to keep pace with your family’s needs and wants.

You can find a new job with the kind of security that lets you sleep soundly and not lie awake worrying about money.

You can find a new job that lets you achieve the emotional and psychological satisfaction you’ve always sought.

And you can do all this without getting more education or training, without moving, without changing industries. You don’t need to learn a new style of résumé, memorize new buzzwords to drop into your conversations, or learn the latest variations of job hunting.

In fact, you may not need to find a new job at all.

I know this sounds crazy. It flies in the face of what everyone is saying. The media are filled with stories about how the American job market has permanently turned into a cold, chaotic, and corrupt environment. The world of paternalistic companies and loyal employees is extinct, say the pundits. It’s a dog-eat-dog world today, in which every man and woman has to be out for him- or herself. We’re told we’ve become a nation of mercenaries engaged in a Darwinian struggle in which only the fittest survive and get to keep their jobs.

Setting all the overblown rhetoric aside, it’s clear that the American workplace has changed. More and more full-time jobs are being turned into part-time or contingent positions. Back-office operations are being outsourced. Instead of staff being added, temps are hired. There’s no more climbing up a company ladder. Upper-level positions are filled with outsiders stolen from competitors, and to move up at all you’ve got to first move out. To keep your job it used to be enough to show up on time, do your job for eight hours, and go home. Today you’re expected to work for as long as it takes to do your work…and the work of the two people who were laid off last month. (See the box on page 6: How Long Are You Working?)

But I’m not telling you anything you don’t know already. You’ve probably seen firsthand signs of the new job market. I bet there are empty desks at work where longtime productive coworkers used to sit before they were laid off. There are probably some people in your office who have shifted over to part-time in an effort to keep their jobs. If you’re like most of us, you’re working longer and longer hours, without getting more pay, because you’ve been sent a veiled message that unless you bite the bullet you’ll be out of a job. Friends may be coming to you asking for leads because they’ve been out of work and are unable to land a new job. Maybe you’re out of work yourself, or just losing sleep, playing out worst-case scenarios in your head.

HOW LONG ARE YOU WORKING?

It’s not just in your head. If you’re anything like the rest of Americans, you are indeed working longer hours than ever. According to the Economic Policy Institute, the average middle-income married couple with children is now working 660 hours more per year than in 1979, the equivalent of more than sixteen extra weeks of full-time work. In 2000, American workers worked an average of 1,877 hours. That’s more than in any other rich industrialized nation. To see how your hours measure up, fill in this quick worksheet:

If you want to get an even more accurate appraisal of how much of your life is devoted to work, add the number of hours you spend commuting to and from the job to the number on line 13 and go through the subsequent steps again.

Despite the rhetoric and all the doom and gloom around you, I believe you have an incredible opportunity right now to turn your work life around and create the perfect job situation.

You can achieve job security, even in a market in which everyone has become a job hopper and at a time when job tenure has been dropping.

You can maintain all the benefits and higher pay of full-time employment, even in a market in which everyone has become a contingency worker and at a time when temps seem the only permanent workers.

You can survive and thrive at work, and still have time for a personal life, even in a market that requires long hours and putting the company first.

You can create a solid, secure stream of income and use it to fuel a happy life.

What all the pundits and experts can’t see, and what you haven’t been told (until now) is that landing the job of your dreams has little to do with your company, your boss, your profession, or your location. It has nothing to do with your résumé, your expanding menu of job skills, or your impressive business Rolodex. Sure, the state of the economy makes a difference, but it’s not the most important factor. Landing the job of your dreams is an
inside job
. It’s done by adopting an entirely new attitude toward work and the workplace, one that puts you in charge of your job. The trick is to “fire your boss” and replace him or her yourself. I know it works because I see it happen firsthand, day after day, in my office.

Coming Together: With Pride by Brio, Alessia
The Girl Next Door by Ruth Rendell
Ordered By The Mountain Man: A Modern Mail-Order Bride Romance by Frankie Love
Bigfootloose and Finn Fancy Free by Randy Henderson
Semi-Sweet by Roisin Meaney
The Penny by Joyce Meyer, Deborah Bedford
The Strike Trilogy by Charlie Wood
Dorothy Garlock by A Gentle Giving
Believe by Lauren Dane
Convalescence by Nickson, Chris