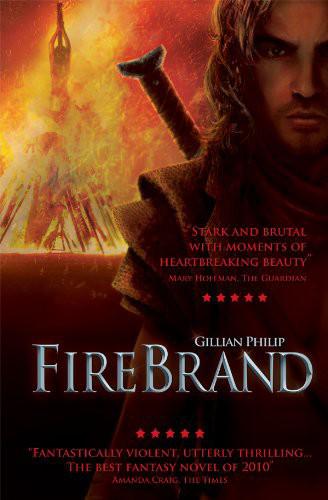 The author has asserted her moral right under
the Design, Patents and copyright Act, 1988
to be identified as the Author of this Work.

A catalogue record for this book is
available from the British Library.

The publisher acknowledges subsidy from the Scottish
Arts Council towards the publication of this volume.

For Lucy and Jamie, as always
and for Cherry Allsopp, with love

GILLIAN PHILIP
was born in Glasgow and has been writing all her life, starting with short but frenetic novels about Captain Scarlet and The Man From UNCLE (having massive crushes on both). She has worked as a barmaid, theatre usherette, record store assistant, radio presenter, typesetter, and political assistant to a parliamentary candidate. While living in Barbados, where her steadiest job was as a singer in an Irish bar, she took up writing professionally, and wrote many short stories for women’s magazines. In 2001 she moved back to Scotland, and now lives in Morayshire with husband Ian, twins Lucy and Jamie, Cluny the Labrador, psycho cats The Ghost and The Darkness, and four nervous fish.

‘Once a year, a new novelist really blows me away. Last year it was Suzanne Collins with
The Hunger Games
. This year it’s Gillian Philip’s
Firebrand…lf you
have a child who adores
Across the Nightingale Floor, Wolf Brother
or even
Twilight
, this is the book for them…
Firebrand
is one of the very best. Like Alan Garner, she re-forges our national myths. Seth exudes a surly sexiness that girls will swoon over, but his rudeness, gutsiness and sense of humour make him as appealing to boys as the wild Scottish landscape through which he fights, hunts and rides for his life. Philip’s clear prose is as fiery as whiskey, but even as she makes you see atrocities through her hero, she springs clever shocks on the reader…This deserves prizes…The best fantasy novel of 2010.’

‘Philip has created an utterly believable other world, where male and female are equals in arms. It is often stark and brutal but with moments of heartbreaking
beauty. I haven’t enjoyed a book in this genre so much since Susan Price’s
The Sterkarm Handshake
.’

‘Wonderful. I wish I’d written it…Superb characterisation…[
Firebrand
is] often profound… I enjoyed every moment of reading it.’

Susan Price, author of The Sterkarm Handshake, and winner of the Carnegie Medal

‘Everything fantasy should be: vital, charismatic characters; intensely personal stories; big, arching themes of power and greed, love and loyalty…And all about the terrible things people do to one another for the sake of a cause or ambition, so there’s plenty of crying to do…Superb…I’m blown away!’

‘One of the best faerie fantasy books I’ve ever read… Feral yet fiercely loyal Sithe hero, Seth, is a fully-imagined and fascinating character who I fell for immediately…Gillian Philip has taken her own mythic heritage and made it into something rare, new and infinitely exciting.’

‘Vast in its magnitude…there are so many things about this book that make me crazy with love of it. Firstly, it is beautifully written…Secondly, the plot kept me on the edge of my seat the whole way through… Gillian Philip is a breath-taking writer who has taken a genre that is swimming with the mediocre and given it an awe-inspiring transformation and I worship her for it.’

This dabbling with the other world is a perilous undertaking.

And I have risked a glamour which can only be exorcised by fire, by cold iron.

A lot of people kept me going when Seth MacGregor was being his ever-difficult self, and I’m hugely grateful to everyone who read the manuscript and gave advice—in particular to Hilary Johnson, Michael Malone, Ruth Howell and Elaine Reid. Special thanks, though, are due to Linda Gillard, who rescued me from the pit of despond (and Seth from the fire) at a bad moment.

I’m indebted to Catherine Czerkawska for help with historical research, and for her permission to use a quote from her play
The Secret Commonwealth
. David Worthington pointed me in the right direction for details of Scottish rural history.

Some very kind Gaelic speakers helped me out. However, the Sithe have been living in another world for many centuries and have played fast and loose with a beautiful language—so any inaccuracies, inconsistencies and plain old errors are entirely down to them (oh, and to me). I should add that in his lazy way, Seth tends to anglicise when he can get away with it.

I’m so grateful to the wonderful people at Strident Publishing—Keith, Graham, Alison and Sallie. Any author who has been lucky enough to work with them knows how supportive, enthusiastic and just plain lovely they are.

Finally, as always, I thank Ian, Jamie and Lucy for their endless patient tolerance while I’ve been away with the faeries. I owe one of you many drinks, and the other two an awful lot of Happy Meals and cinema visits. (Within reason.) You’re the tops.

THE
courtyard stinks of animals and muck and human waste. And wasted humans, I can’t help thinking, because beneath the stench and the louring sunset sky lies the taint of death, like a stain that can’t be shifted. My brother isn’t the first to die here, and he won’t be the last.

I rub my filthy arm across my nose, and then across my eyes because they’re blurred and I can’t see properly. Then I shut them altogether and curl up against the parapet. I want to be a hundred miles away, but what use would I be to Conal then? Anyway, the hideous weight of the crossbow in my arms can’t be ignored. I hate crossbows, I always have: a horrible weapon, brutal and distant, and I’ve never liked to touch them or even look at them. It’s as if I was born knowing I’ve an appointment with one that I’m not going to want to keep.

I sniff and rub my eyes again, wishing I could be more of a man, wishing I wasn’t so afraid. I’m sixteen years old, more than old enough to kill and die, a lot older than I was when I watched my father die, hacked almost to bits and still scrabbling for a last breath. His death couldn’t be avoided and neither can this one. What’s the point of premature grief?

My eyes jerk open. A clattering rattle of wheels on flagstones, and I glance over my shoulder. This is a good vantage point, but I’ll likely be seen as soon as I fire, and I’ll have to be fast to get down the tower walls and away. I can’t think about that, not now. The mob that so far has been muted, only muttering with the day’s excitement, now raise their voices as one, turning
as if by black magic into a single howling beast. I make myself look. And I gasp.

That isn’t my brother, it can’t be. That is not Cù Chaorach, Hound of the Sheep, Father of his Clann. He’s never been so thin. His face is half-blackened and bloody, his hair is gone, sheared roughly off. His shirt is ripped and frayed and through the gashes in the linen I can see the bloody marks of a lash on his back.

Oh, no.
No
. The girl is with Conal. She can’t be any older than me, and she’s taken a few beatings too, poor cow. I’ve never seen such bruised terror in a human face, and she is weeping uncontrollably. Their hands are bound but Conal’s shoulder is pressed hard against hers, and when they’re yanked apart and thrust down from the cart, he quickly recovers his footing and presses close to her once more. There’s a dark stain on her filthy grey shift: she’s wet herself. And my brother, the great noble fool, is all concern for her, when she’s one of them, and in slightly altered circumstances she’d have been howling at him with the rest of the mob.

He turns his face to hers, his lips move. It’s all rubbish, probably. He’s telling her it’ll be over quickly, she needn’t be scared. The liar.

Gods, Conal, you’re going to want me to fire twice. Do I have time?

I can’t do this alone, I was never any use without him. I can’t stop myself calling out to him.

Conal goes very still, but he doesn’t look up. As he whispers to the girl once more a smile spreads across his wounded face, a smile of pure happiness.

‘Look at the warlock, he’s grinning!’ Something flies out of the crowd and strikes Conal’s cheekbone, making him stagger. ‘Happy, scum? You’ll be seeing your Master soon!’

‘Aye, not soon enough!’ Raucous laughter. ‘See if he smiles when he’s burning!’