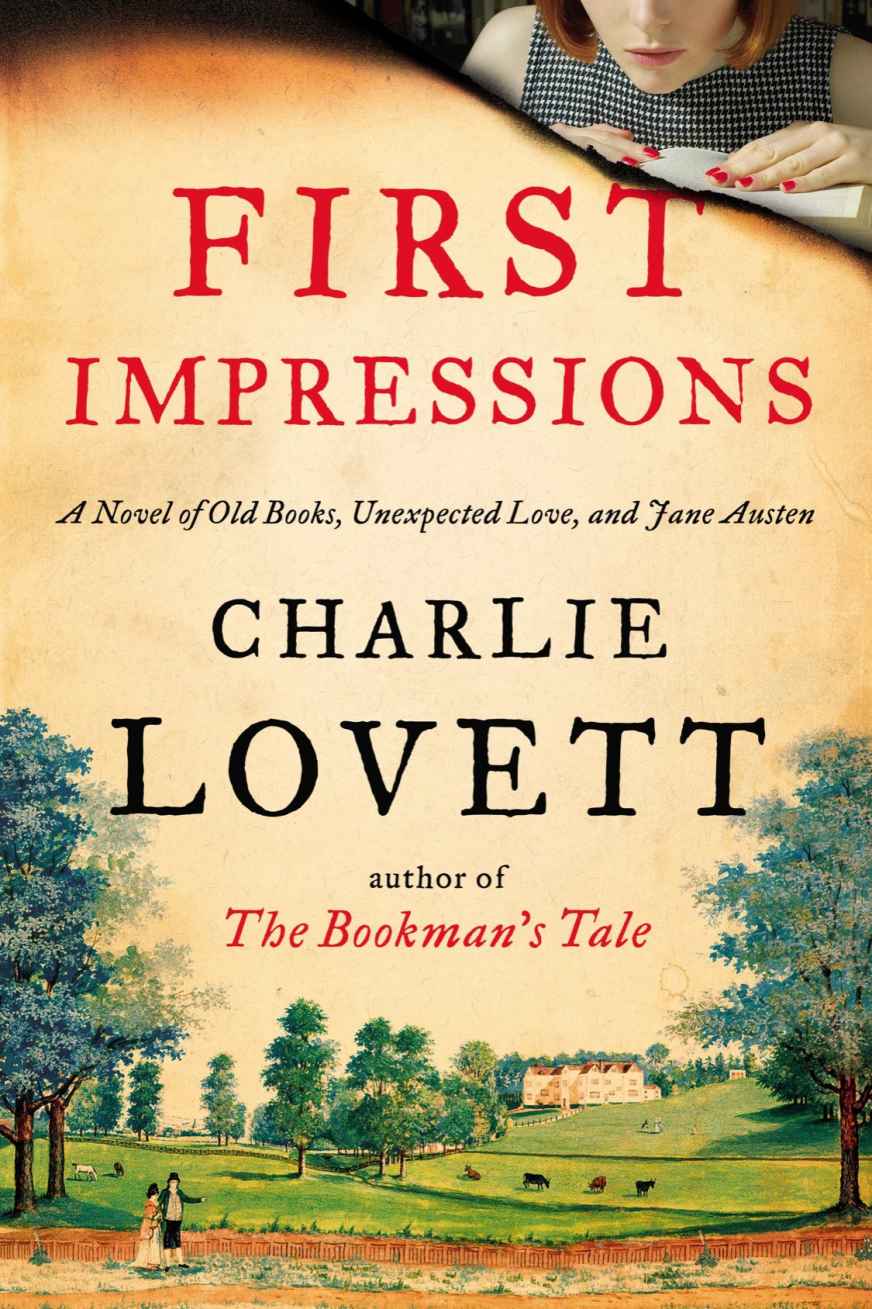 Who will always be to me what Elizabeth is to Darcy.

F
OND AS SHE
WAS
of solitary walks, Jane had been wandering rather longer than she had intended, her mind occupied not so much with the story she had lately been reading as with one she hoped soon to be writing. She was shaken from this reverie by the sight of an unfamiliar figure, sitting on a stile, hunched over a book. Her first impression was that he was the picture of gloom—dressed in shabby clerical garb, a dark look on his crinkled face, doubtless a volume of dusty sermons clutched in his ancient hand. Even the weather seemed to agree with this assessment, for while the sun shone all around him, he sat in the shadow of the single cloud that hung in the Hampshire sky. Realizing how far she had come from home, Jane thought it best to retrace her steps without interrupting the cleric’s thoughts as he had unknowingly interrupted hers. During the long walk home, across fields shimmering with the haze of summer heat, she amused herself by sketching out a character of this old man, storing him away, like so many others, for possible inclusion in some novel yet to be conceived. He was, she decided, a natural history enthusiast, but his passion lay not with anything beautiful like butterflies or wildflowers. No, his particular expertise was in the way of garden slugs, of which he could identify twenty-six varieties.

By week’s end, Jane had filled in the pathetic details of his life. Disappointed in love, he had turned to natural history, where the objects of his pursuit were less likely to spurn his advances. As his passion for his study grew, and as he shared it more enthusiastically with those around him, his invitations to dine gradually declined until he was left alone on most evenings with his books and his slugs. He was a melancholy figure, which made it all the more shocking to find him, on Sunday morning, not only seated in the Austen family pew, but smiling broadly and greeting her by name.

Jane had led the family procession from the rectory to the small stone church of St. Nicholas, where her father was rector. The church stood on the far outskirts of the village, flanked by flat, green meadows. After passing through the rectory gates into the narrow lane that led to the church, the Austens had fallen in with several villagers. When she had concluded her pleasantries with these acquaintances, Jane had not a moment to respond to the stranger’s greeting before the service began and she found herself separated from him by her mother and her sister Cassandra; of her six brothers, none were currently in residence in Steventon.

The man’s robust baritone voice, evident in his hymn singing, exuded a spirit that was anything but melancholy. Jane endured a sharp elbow from Cassandra for not attending to the gospel reading; instead, she was trying to watch the man out of the corner of her eye. She failed to follow the thread of her father’s sermon, lost as she was in a reevaluation of the stranger’s history. By the time the service ended she was thoroughly intrigued and determined to secure a proper introduction to satisfy her curiosity about the true nature of his character.

“Go along home and I shall wait for Father,” she told her mother and Cassandra as they stood beside the ancient yew tree that clung to the west end of the church. Jane felt certain that a visiting clergyman with leave to occupy the Austen pew must be known to her father, and she expected Mr. Austen to make the necessary introduction, so it came as a surprise when she felt a tap on her shoulder and turned to face the stranger, who addressed her in a cheerful voice.

“Miss Jane Austen, if I am not mistaken.”

“You are at an advantage, sir,” said Jane. “You know my name, but I do not know yours.”

“Mansfield. Reverend Richard Mansfield at your service,” he said with a slight bow. “But we have nearly met already.”

“Only that two days ago you emerged from the waving grain of Lord Wintringham’s field and stopped in your tracks when you spotted me reading on a stile just outside Busbury Park. At the time I conceived the idea that you were a rather dull and impetuous young lady, but I already begin to suspect that I may have been mistaken.” His eyes twinkled in the morning sun as he said this, and his smile transformed from one meant for the general public to one that seemed to be reserved solely for Jane.

“I hope you will come to believe so, Mr. Mansfield. I have been accused of having many faults by those who know me well, but neither dullness nor impetuousness has been among them.”

“And of what faults do they accuse you?”

“My worst, or so I am told, are a too highly developed interest in fictionalizing my acquaintances and a tendency to form opinions of others hastily.”

“Opinions such as the one you formed of me when you saw me alone with my book?”

“You do me wrong, sir. You assume first that I saw you, second that I gave your appearance sufficient thought to form an opinion, and third that my opinion was ill considered.”

“In the first case,” said Mr. Mansfield, “I observed you myself, for though your mind may have been elsewhere, your eyes were certainly on me; in the second case, your father tells me, somewhat to my surprise, that you aspire to write novels, so I can only assume that anyone you meet may become a victim of your imagination; and in the third case it seems impossible that you would have guessed the extent to which our interests overlap.”

“I confess that shared interests did not occur to me. I imagined you a student of natural history, reading . . . but you will laugh when I tell you.”

“I imagined you reading a book on garden slugs.”

Mr. Mansfield did laugh, long and heartily, before confessing the true nature of his reading. “It may shock you, Miss Austen, but in fact I was reading a novel.”

“A novel! You
do
shock me, sir. Do you not find novels full of nonsense? I myself find them the stupidest things in creation.”

“Then you read novels?”

“Novels! I’m surprised at you, Mr. Mansfield, suggesting that a young lady such as myself, the daughter of a clergyman, no less, could occupy her time with such horrid things as novels.”

“You tease me, Miss Austen.”

“Indeed I do not, Mr. Mansfield, for though you know that I aspire to
write
novels, you cannot expect that I would take my interest in the form so far as to actually
read
them.” Because Mr. Mansfield was old enough to be her grandfather, Jane took the bold step of adding a wink to this statement and turned toward the rectory. The congregation had dispersed and only the sounds of birdsong and the breeze in the yew tree disturbed the silence of the morning. Jane was pleased when Mr. Mansfield fell into step beside her as she made her way up the tree-lined lane. With the summer sun now high in the sky, she was grateful for the cooling shade.

“Surely, Mr. Mansfield, your shortest route to Busbury Park lies in the opposite direction,” said Jane.

“Indeed it does, but you are assuming again, Miss Austen. First that I am staying at the park, and second that I am taking my luncheon there.”

“And my novelist’s imagination has deceived me again?”

“Not entirely,” said Mr. Mansfield. “For I am a guest at Busbury Park, but though he can offer me only cold mutton, your father has asked me to take my luncheon at the rectory.”

“I confess, Mr. Mansfield, I am sorry to hear it.”

“And why is that? Are you so embarrassed to be seen in the company of a novel reader?”

“On the contrary, it is
because
you are a novel reader that I had rather hoped to keep you to myself. Once you enter the doors of the rectory, you will become a friend to my mother and my sister Cassandra, and you will no doubt retire after lunch to the study with my father and abandon the rest of us.”

“Surely, Miss Austen,” said Mr. Mansfield, “I can be both a visitor at the rectory and a special friend of the rector’s younger daughter.”

“I believe, Mr. Mansfield,” said Jane as she took the clergyman’s arm, “that I should like that very much indeed.”

Woo'd in Haste by Sabrina Darby
Mission Compromised by Oliver North
The Left Series (Book 3): Left On The Brink by Fletcher, Christian
Off the Crossbar by David Skuy
The Best Night of Your (Pathetic) Life by Tara Altebrando
Campus Tramp by Lawrence Block
The Secret Diary of a Princess a novel of Marie Antoinette by Clegg, Melanie
Ryan's Love (Sawyer Brothers #1) by C. A. Harms
That Fatal Kiss by Lobo, Mina
Things Too Huge to Fix by Saying Sorry by Susan Vaught