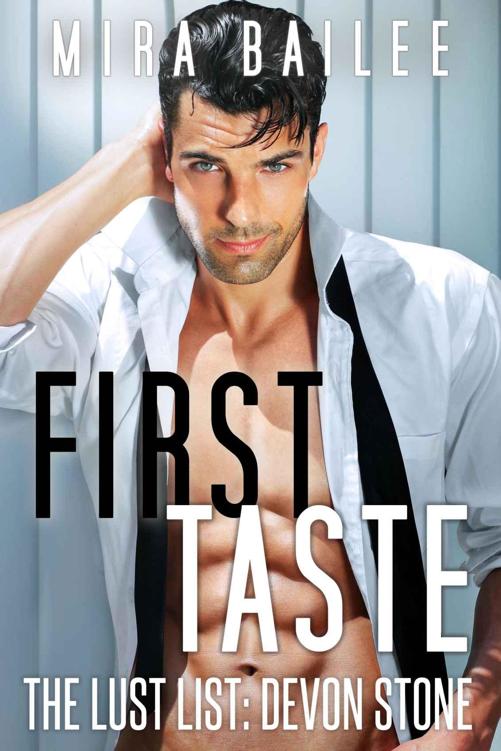 Publisher’s Note: This is a work of fiction. Names, characters, places, and incidents are a product of the author’s imagination, and any resemblance to actual people, living or dead, or to businesses, companies, events, institutions, or locales is completely coincidental.

The Lust List
Series
by Mira Bailee and Nova Raines

who knows me better than I know myself.

I start the morning on a promising note—a full-blown panic attack with a side of desperation.

I rush across the living room to the other bedroom in our little apartment. This old place was the best we could afford on our measly incomes in this part of Los Angeles, but we’ve done our best to spruce it up: scrubbed mildew from the floorboards, strategically placed rugs over the worst of the carpet stains, and I even dedicated my unemployed free time to DIY projects I found online to decorate the bland, beige walls. I’m certain this place is the nicest unit in the building. I mean, Mr. Harrison downstairs has been bitching for months about a two-foot hole in his bathroom wall. Never mind the fact he doesn’t want to admit he caused the damage after the Kings lost in overtime. Yeah, this place isn’t
that
bad.

The jittery feeling persists while I knock on my roommate, Maddie’s, door. It swings open with the lightest touch. Her room is dark, and I can hear soft snores coming from the bed.

“Maddie. Wake up. I need you,” I say, shaking her foot that hangs out from under the cover.

She groans and rolls over, croaking out an unintelligible slur of words. “It’s too early, Olivia. Get the hell out.”

My hand goes to my belly, trying to soothe the nauseous feeling. “It’s almost noon,” I say, tripping over a bag as I walk to the window and pull aside the thick blackout curtains. Harsh sunlight bursts through the thin glass; one of the panes is cracked. Maddie’s room illuminates to show off the details that reflect her personality. Dirty laundry strewn about the floor and fast food containers on every surface compete with the intricate silk scarves she has draped over lamps and the string of white Christmas lights woven around the curly iron of her headboard. Maddie is Bohemian-chic meets messy-frat-boy.

In her defense, she does work long hours late into the night bartending at Brecken’s Sports Pub. She brings home enough money to help the charity case that is yours truly, covering the rent while I continue my unsuccessful hunt for a job. I’m eternally grateful for her, and I swear I leave her alone most mornings. But today’s an important one, and I need Maddie’s help.

She’s sitting up, assembling her wavy blond hair in a knot on top of her head. Aside from the wreck she resembles when she first wakes up, Maddie is hot—like some perfect combination of classy Academy Award winner and a golden-haired Sports Illustrated swimsuit model, both of which she’d die to be.

“I need you to help me get dressed.”

“Seriously?” She flops back down in bed.

Okay, yes. That sounds pathetic. I’ll admit it. But my grandmother has better style than I do, and my closet’s filled with clothes that are either worn out from over-washing or two sizes too small. Since my broke ass can’t do anything to change what’s in there, I have to rely on Maddie—and her talent for making me into a better version of myself—to get me looking like the ideal candidate for Platinum Planning’s newest assistant to the head event planner himself, Mr. Greg Keenly. If I land this job, I’ll finally make enough money to take care of myself
and
pay Maddie back for everything she’s done for me.

“Please. I’m going to end up late if I don’t figure this out now, and all I have are ill-fitting, ugly-ass adult clothes.”

“Sure. But I’m twenty-two, and nothing I own looks like it came from the twenty-first century. I need to look good—better than good.”

Maddie stumbles out of bed and follows me back to my room. She takes one glance at the outfits laying on my bed—a faded, blue pantsuit and a dress that would better fit a twelve-year-old. Her burst of laughter confirms I need help, and I’m not even offended.

“What’s it for? Is it a date? Oh, please tell me it’s a date. You so desperately need to get laid. You—”

Maddie’s shoulders drop, losing some of her temporary excitement. Of course she would be more worried about me dating than working. My last boyfriend, Bryce, and I broke up over a year ago, and I haven’t bothered looking for anyone new. It’s too stressful. Dating, the expectations, the whole act of coming across like perfect girlfriend material. More often than not, it just makes me sick. Literally. Being single has its perks. Sure, I’m missing out on potentially decent sex—a momentary relief from my own neurotic nuances, quiet time for my constantly worrying mind. But along with the sex comes the overanalyzing and suspicions and the arguments caused by both. In the end, the guy gets sick of it fast, and I can’t blame him. It’s much easier to remain single.

Maddie leaves the room only to return a minute later carrying a black dress. She holds it out for me, but I’m skeptical.

“Does that really convey professional—”

I go to our shared bathroom to change, doing a double take when I see my reflection in the mirror.

“Damn.” I can admit this dress gives the right impression. My dark hair frames my face before cascading over my shoulders, detracting from the obvious cleavage this dress gives me. It’s formfitting and low-cut but in a way that says ‘professional businesswoman’ and not ‘amateur stripper’. I may even be able to play off confidence if I can get control over the nervous ache in my stomach.

In my room, Maddie is half asleep on my bed. My little square of home is much cleaner than hers but holds little personality. She lifts a hand to point at the side table that holds a simple, white lamp and my charging cell phone. “It was buzzing. I turned it off.”

“That means it’s time to go.” I slip into black flats—no way do I want to deal with heels when I’m feeling all shaky. I’m reaching for my phone when I see Maddie glaring at me. “What?”

“You set an alarm to tell you when to leave?”

“And when to wake up. When to get ready. And a half dozen others to keep me on time today.” I grab my purse, unplug my phone, and pull up the map with the directions already routed out. “You shouldn’t be surprised.”

“I just thought you were working on being less…obsessed with order. Didn’t Dr. Shannon—”

“I’ve gotten better.” My therapist has been working on helping me let go of minor control issues in an effort to help me deal with some of the bigger ones. Lately, we’ve been working on time and my tendency to have everything planned out by the minute. My handy alarms keep me on track, but she says they make me too dependent on outside forces. Days when I’m not busy, I do okay leaving my comfort zone—turning off the alarms and ignoring the clocks—but anticipating today triggered the panic, so I had to give in. Just today. “I see her later. I’ll let her know I’ve been bad.”

Maddie sighs, “You’re going to be great. Whatever the job is.”

“Thank you.” I rush over to give her a hug, knowing I need to be in my car in the next thirty seconds. “And thank you for this.” I gesture at my dress. “Love you, best friend.”

I leave the room as she rolls over in my bed, and I suspect she’s not going to bother going back to her own.

Twenty minutes later, when I should be pulling up to the Platinum Planning office, I’m, instead, parked at the security gate of some ritzy housing complex. The guard approaches my window, and I’m not sure what to do next.

This guy is inspecting me up and down, a smug grin forming on his face. He’s huge—I’m talking Incredible Hulk’s nephew huge. He’d tower about two feet over my five-two frame, and I imagine he has to be cautious when hugging his loved ones so as not to accidentally strangle them. His tan skin glistens from a layer of sweat, yet the heat doesn’t seem to faze him as he leans down by my window. I shrink into my seat.

“You must be here to see the old man then. He’s clearly got a type with you women…”

He’s not so subtle as he glances at my chest, and I suddenly remember the low cut dress. Wait. What? Does he think I’m here as a hooker or something? It’s midday…on a Monday. Who—?

I fumble to defend myself. “No. I—uh—that’s not. I’m here for something else. A real interview. For a
job
.”

His smile proves he doesn’t believe me, and he steps back from my car. “Have a good day, ma’am. Good luck with that job.”

He presses a button inside the little, brick guard station, and the massive gate, adorned with a big letter ‘S’, swings open. I try to slow my pulse as I follow the only road that leads the way in.
Relax and pretend you’re going to the beach. Just focus on the scenery.
The narrow road is lined with tall, meticulously pruned hedges, and beyond them, I can see the tops of palm trees and evergreens. There aren’t any houses or side roads or… This isn’t a neighborhood. It’s one person’s property.

The road—driveway—curves up ahead, and as I get closer I see the scene open up before me. A vast, green lawn seems to appear out of nowhere, and the driveway transitions from gray concrete to a mosaic of bricks and stones. It forms a loop at the end, winding its way around a marble fountain, putting on a water show for no audience. In the distance, the ocean meets the horizon. There’s nothing but blue out there, but even that secluded chunk of the world—from the depths of the water straight up into the sky above—doesn’t seem to compare to the massive mansion standing before me.