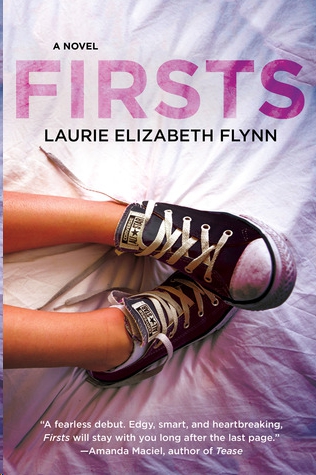 For Steve—my last, my only, my everything

Tonight, I’m doing Evan Brown’s girlfriend a favor. An awkward, sweaty, fumbling favor. Melanie, or whatever her name is, owes me big time.

Except she’ll never know it.

“Wait there,” I tell Evan before slipping into my walk-in closet.

I sneak a glance back at him, at his crouched-over stance on the edge of my bed, his skinny shoulders hunched forward and his hands on his knees. He looks like he’s getting ready to play a video game. I stifle a laugh. This is one level he won’t beat on the first try.

When I’m carefully ensconced in my walk-in, I wiggle into a pair of pink satin boy shorts and a matching camisole. I know by the fear on his face and the smell of nervous sweat emanating from his armpits that Evan can’t handle the black lacy negligee, and especially not the red slip, the one with the slit that goes all the way up.

I apply pink lipstick and leave my hair loose around my shoulders. It’s wavy, still damp from the shower. Normally I’d flat iron it into stick-straight submission, but this time, maybe I’ll drop the getup. I rub the lipstick off, but the judgment in my eyes remains.

Evan will get what I’m most definitely not—the good girl.

“God, Mercy,” he says when I emerge. His voice cracks and he blushes redder than his hair, which makes the pimples dotted across his cheeks stand out. Puberty wasn’t kind to Evan Brown.

“Don’t say that,” I command, climbing onto his lap. His legs are trembling.

“Don’t say what?” His voice is trembling, too.

“But that’s what Angela calls you.”

“Angela’s my friend. You’re not. You’re somebody I’m doing a favor for. You don’t have to call me anything. But if you want to, my real name will do.”

“Mercedes,” he says, squeaking out the extra syllables. “My mom always wanted one of those.” He slaps his forehead. “Shit, I didn’t mean to bring up my mom. I’m not thinking about her or anything.” He removes his glasses and rubs his eyes. “I just didn’t think I’d be so nervous.”

I used to like my name. Mercedes. That is, until I figured out I was named after a car. The shiny red car that my dad loved more than anything—the one he waved from as he drove away. I remember liking that car, too. My dad used to let me sit in the front seat and pretend to steer. “You’re going to have a lead foot,” he would say over my childish
vroom, vroom
s. “Somebody’ll need to teach you how to slow down.” But he didn’t stick around long enough for that person to be him.

I smile and run my fingers through his hair. Or at least I try to, but he put so much damned gel in it that my hand gets stuck.

“Don’t worry about it,” I say, wiping my sticky fingers on the back of his shirt. “Everyone gets nervous.” I kiss his neck, where I can feel his pulse beating against his skin. I move my hands to the base of his T-shirt and pull it over his head.

“I brought these,” he says, jamming his hand in his jeans pocket and pulling out a roll of condoms. There must be about ten of them. He attempts a smile, but it looks more like a grimace.

“It’s always good to be prepared,” I say. “But save those for Melanie. I’m prepared, too.”

I lean over and open my nightstand drawer, where the boxes are piled neatly like little soldiers. Ultra Thin, Ribbed for Her Pleasure, Second Skin, Magnums. I pull out an Ultra Thin. No matter what they think, most guys are Ultra Thins. Just enough for protection, no extra frills. This fact was drilled into me early. My mom started teaching me about birth control when other moms were still on tampons.

Besides, Evan doesn’t look like a Magnum kind of guy.

“How far have you got with Melanie?” I say.

“Melody,” he says. “Melody—that’s her name. Not Melanie. Melody, like a song.” He looks down to where my cleavage is propped in front of his face. “She let me feel her up. And one time when her parents were out of town, we almost did it. We did other stuff.”

I put my hands on my hips. “You’ve got to be more specific. Other stuff, like you’ve seen each other naked? Like you went down on her?”

He nods and blushes an even darker shade of red. “But she didn’t want to go all the way. She wants it to be the best night of her life. So I have this whole thing planned, a dinner and stuff.”

“Very romantic,” I say, smiling broadly.
This
is the reason I do what I do. “Sounds like you like her. And she likes you.”

I love when guys take the time to make a plan. And even though Evan mumbled “a dinner and stuff” without making eye contact, I know he means much more. He took the time to know Melody, what she likes, and what will make her happy.

“That’s the problem,” he says. “She says she loves me. She says because she loves me, she just knows I’m going to rock her world.”

I nod. I understand this part. Melody sounds like every other girl, the kind who expects fireworks the first time. I know better. Fireworks don’t just happen. They need to be carefully arranged and then ignited slowly.

Which is exactly what I’m doing for Evan.

“But you don’t think you’re going to rock her world,” I say slowly. “That’s why you’re here.”

“Well, yeah,” he says. “She’s way hotter than me. And my friend, Gus—he’s still with his girlfriend because of you.”

I know exactly who Evan is talking about, except I remember him more by his nickname, the one I secretly gave him. The Crier. Gus was number six, the one who acted all tough and practically tried to instruct me—until he broke down and sobbed into my pillow afterward.

I brace my hands against Evan’s shoulders. “Well, you’re a lot farther along than some people. You’ve already seen each other naked. You got that out of the way. For some people, that’s the most awkward part.” I slip the straps of my camisole down my shoulders. “Like now. What would you do if I was Melody?”

“Right and wrong,” I say. “You’re always right to tell a girl she’s beautiful. But never ask if you can do something. Be bold, because confidence is one thing you can absolutely fake until you actually feel it.”

Evan continues to stare at my breasts. He’s breathing heavy, and I can feel his erection through his jeans. Maybe Evan will need a Magnum after all.

And he does—he makes plenty of mistakes. He palms my breasts like they’re baseballs, slobbers on my neck, sticks his tongue halfway down my throat. They’re rookie errors, the kind most people don’t get right the first time. But that’s what I’m here for. I tell him to close his lips, follow the curves of my body with his hands, use his fingers to trace an outline for his tongue to follow. I teach him how to open the condom packet, how to pinch the tip before rolling it on to make sure all the air gets out. I dim the lights for the final act, help him guide himself into me, don’t chastise him for the first fifteen seconds of fumbling in the dark but give him credit for his improved technique in the last fifteen.

But when he asks for a round two, I shake my head firmly. I have never allowed a round two. “Save it for Melody,” I say.

He stretches out under the covers and turns his head on the pillow. His breath is still coming in ragged gasps. “Should I stay over?” he says. “We could do it again in the morning. I bet I’ll last longer.”

I cover my breasts with my hands and stand up, searching for something to better cover myself with but only finding a sheer robe. I curse my lack of actual pajamas. This is the part I don’t like. In the dark, when I’m the one in control, even with everything on full display, I feel less naked than now. Then the lights come up and they want to talk. To ask questions. Questions I can’t answer for myself, let alone for them.

“You’re not staying over,” I say, fastening the robe around my waist. “You’ll get there. Girls care less about that than you think. Especially in the beginning. You can work up to it together.”

He grins. He looks different, more handsome somehow. In the softer light, his pimples aren’t as evident and his jawline seems more pronounced. One day, I think Evan Brown could even be a heartbreaker.

But that day isn’t today.

I glance at the clock on my nightstand. Eleven p.m. on a Tuesday. “It’s a school night, Evan. Time for you to go. Your mother will wonder where you are.” Or I assume she would. Most mothers do. Not mine, of course.

His grin turns into a frown. “Do I, you know, owe you something? I don’t know how this works…” His voice trails off.

“You don’t owe me anything. Just be good to her, okay? Remember everything we talked about.”

I know he will. He even took notes.
Open her car door for her. Bring her flowers, not something generic like roses but her actual favorite flowers. Have dinner reservations in advance, not necessarily somewhere fancy but somewhere meaningful, like where you had your first kiss or where you realized you loved her. Kiss her, not just on her lips but in unexpected places. On the nape of her neck. On her forehead. On her wrist. Push her hair behind her ears gently. Take a picture. She’ll want to remember the night.

I swallow against a lump that has risen up suddenly in my throat. It’s not that Evan is different—he’s a nice guy, a kid who loves his girlfriend and wants to please her. Maybe I’m the one who’s different. Maybe this speech is starting to feel too familiar. I told myself five favors for five deserving virgins. Five was the line I drew in the sand, and I trampled over it like it wasn’t even there. Evan is the tenth, and ten is a line I can’t just trample past.

But I’m certainly not going to get into this with Evan, so I put on a fake smile. I gesture around the room at the chaise lounge and walk-in closet and floor-to-ceiling shoe rack. “Besides, I really don’t need your money. Spend it on Melody.”

The Castle in the Attic by Elizabeth Winthrop
The Imperialist by Sara Jeannette Duncan
Collected Poems by Sillitoe, Alan;
The Devil to Pay by Rachel Lyndhurst
Will of Man - Part Three by William Scanlan
Lying with the Dead by Michael Mewshaw
Manhunt: The Ten-Year Search for Bin Laden--From 9/11 to Abbottabad by Peter L. Bergen
Royal Institute of Magic: The Shadowseeker (Book 2) by Victor Kloss
Silver Eyes by Nicole Luiken
The Silence of the Wave by Gianrico Carofiglio