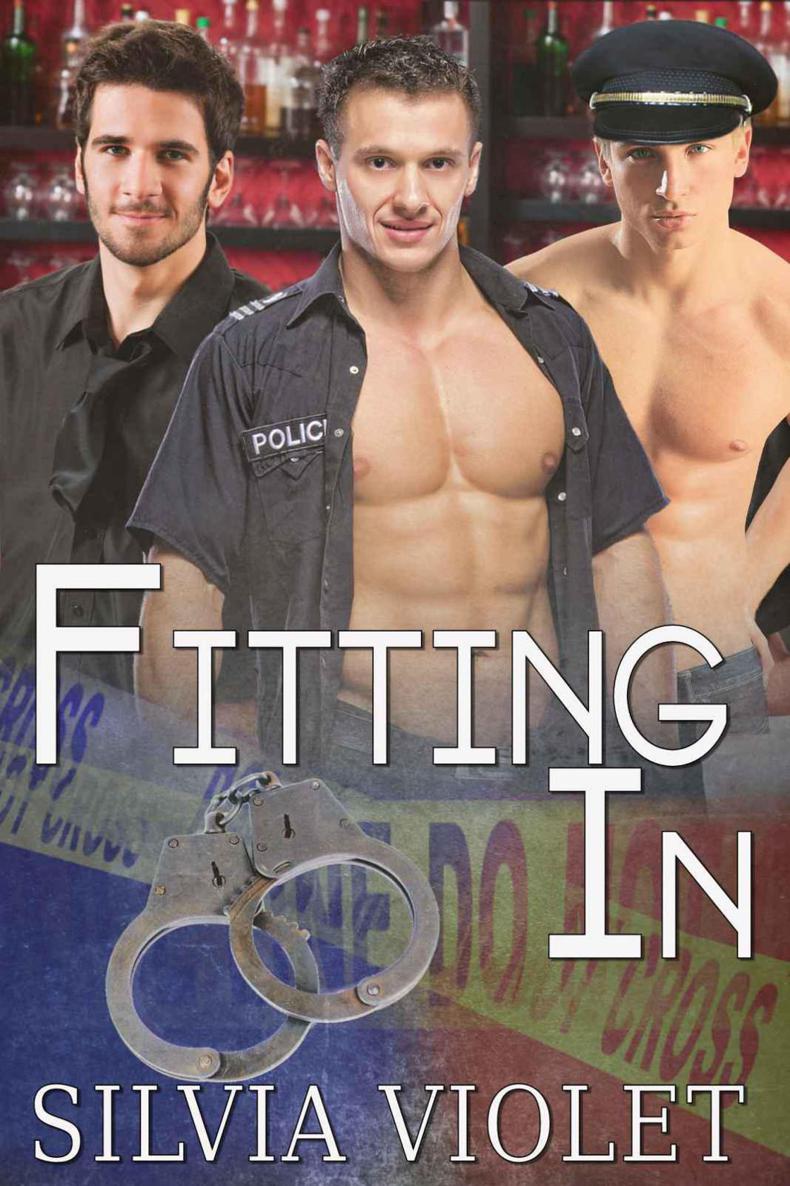 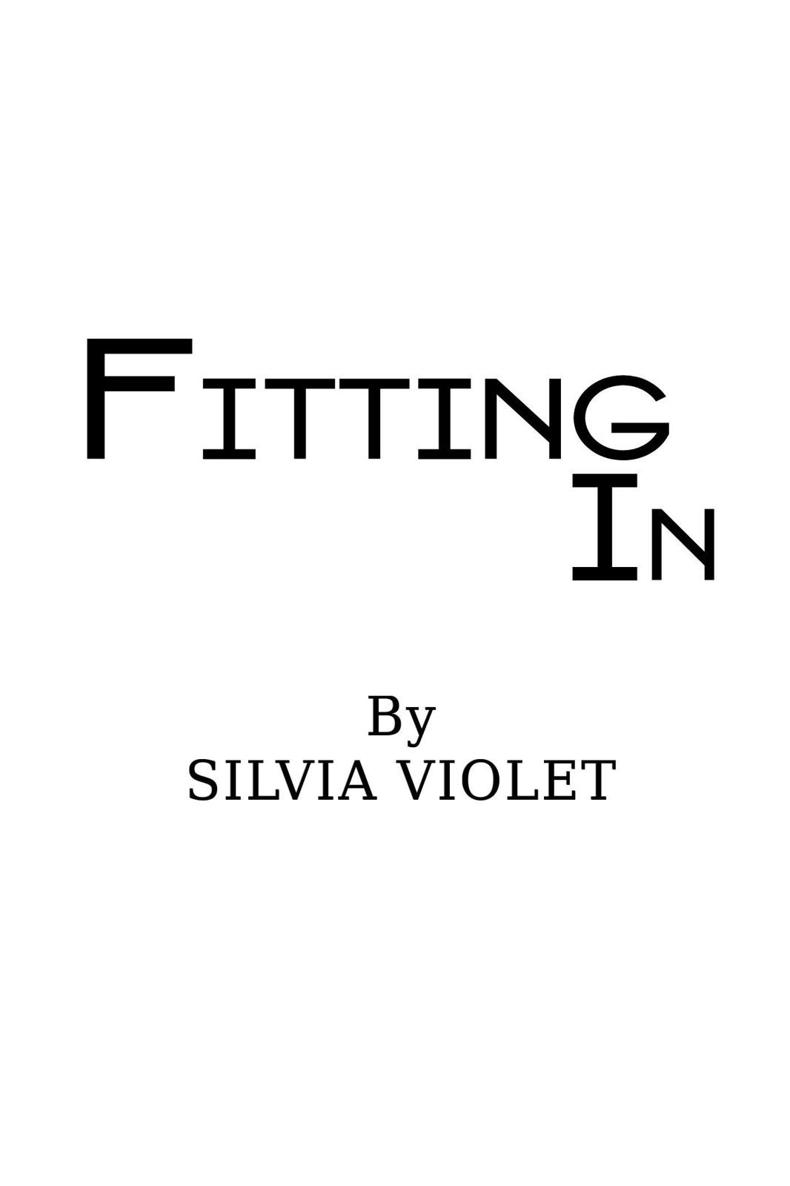 To all those who pushed me to write faster, especially Christy and Sharon, and to Erika, Hank and Mathilde for helping me along the way.

Fitting In by Silvia Violet

All Rights Reserved. No part of this eBook may be used or reproduced in any manner whatsoever without written permission except in brief quotations embodied in critical articles or reviews.

Fitting In is a work of fiction. Names, places, characters, and incidents are either the product of the author’s imagination or are fictionalized. Any resemblance to any actual persons, living or dead, is entirely coincidental.

The author acknowledges the trademarked status of the following wordmarks used in this story:

Two cops walked into a bar. Mason, the bartender, waited for the punch line, because no way in hell were these ridiculously hot men real cops. They were one hundred percent fantasy material. He hoped to hell they were strippers, and they’d be willing to do a private performance for him.

Their dark blue uniforms were snug, hugging their bodies in all the right places. The taller of the two men was big enough to bench-press Mason. His shirt looked like it might burst at the seams, and Mason hoped it would. Dark, wavy hair fell over his forehead and softened the hard lines of his face. His eyes were dark without being warm, just right for a cop.

His partner was shorter, about Mason’s own five foot eleven or so. He had buzz-cut dirty blond hair and blue eyes. He looked younger than his partner, like he hadn’t been out of the academy for long, but he was just as ridiculously hot as the bigger man. His looks were the all-American-boy type. He’d probably played baseball in school and won the heart of every girl he smiled at. He was a perfect counter to his partner’s rough, domineering appeal. They could play a scintillating game of good cop, bad cop, and Mason would love for them to play it with him.

They headed toward the end of the bar by the register where there weren’t any customers during the midafternoon lull.

“What can I get for you, officers?” Mason asked.

The big one smiled. “Anything cold.”

The shorter man punched his partner’s arm. “Nothing. Thank you. We’re here on official business.”

The big man rolled his eyes. “Can’t I at least get a soda?”

Mason was glad to have the simple task of scooping ice and pouring fountain drinks to distract himself for a few minutes. What official business would they have here? While the occasional fistfight broke out, most typically during the NCAA basketball tournament, Nathan’s Public House was hardly a hotbed of crime.

He picked up the drinks and faced them again, willing his hands to stop shaking. It wasn’t like he hadn’t served plenty of attractive men in the past. What was it about these two that had him so stirred up?

He set the drinks on the bar in front of them and watched as they both took a sip. His cheeks heated when he realized he was staring, openmouthed, at the flex of muscles in the bigger man’s throat as he swallowed.

The shorter man smiled and held out his hand. “I’m Officer Jack Abney, and this is my partner, Gray Sadler. We want to talk to the staff who were working last night when Gino’s was robbed in case anyone might have seen or heard something that will help with the investigation.”

Mason took Jack’s hand. His skin was softer than Mason expected, and he held Mason’s hand a few seconds longer than he needed to. “Um…I’m Mason Shields.”

Mason thought he might melt, but this wasn’t a time to become a puddle of lustful intentions. The robberies had shaken up most of the business owners in the part of downtown Durham where Nathan’s was located. The break-in at Gino’s was the third one in the area, and all the robberies were believed to have been inside jobs pulled off by well-organized professionals. The occasional group of kids breaking a window and trying to get into the till or taking valuables customers foolishly left lying on the seats of their cars wasn’t uncommon, but this type of systematic criminal activity was something new.

“I was here last night, but until I heard sirens, I had no idea anything was going on. It was really crowded, and I had a long line at the bar so I was focused on making drinks and keeping customers happy.”

Jack stood up and looked toward the windows. “Not much of a view of the place either.”

Mason shook his head. “Once the lights go out over there, I can’t see a thing, especially with people blocking my view out front."

His partner, Officer Sadler, looked at Mason then, his dark eyes calculating. “We understand one of your servers worked at Gino’s until a month or so ago.”

“Yes, Gwen did.” The idea of Gwen working for a band of criminal masterminds was ludicrous. She could barely manage to serve a couple of tables without fucking up their orders.

Mason thought through the evening. Gwen had been there, but he didn’t remember seeing her after the dinner crowd left, and he’d wondered why they were understaffed when the rowdy game watchers filled the place up. “She was, but her shift must have ended by nine.”

“Is that unusual?” Jack studied him as carefully as his partner had. Having the two gorgeous men staring at him was doing unsettling things to his insides, and his expanding dick was making his pants uncomfortable.

“I guess so. Kinda. Usually most of the waitstaff works until eleven on weekends, but I really don’t think—”

“Okay. Maybe it would be better if you talked to my manager.”

His voice was low and sexy. If Mason didn’t know better, he’d have thought Gray was flirting with him, but he had to be imagining it. Jack was staring at his partner like he’d lost his mind.

Mason looked back at Gray and was caught by his cool gaze. He bit into his lip, needing the sharp pain to break the spell and allow him to look away. Gray exuded dominance. Mason had no doubt he was a man who expected to get his way, and Mason would be happy to give him just that. The thought of being pinned under him and told exactly how to please him made Mason shudder.

Needing to break the tension vibrating among the three of them, Mason said, “The bartender knows all, is that the theory?”

“Something like that.” Jack’s sly grin made Mason’s knees weak. These two were going to be the death of him.

The officers asked a few more questions, but Mason truly didn’t have anything useful to tell them so they moved on to questioning the servers.

He was glad there weren’t many customers in the bar because both cops had asses worthy of his devoted attention. He sighed as he watched them while pretending to wipe down the bar. What he wouldn’t give to peel them out of their tight blue pants and get a closer look.

Maybe the fact that it had been months since he’d bothered to find a partner at all was part of the problem. He’d never really enjoyed the anonymous club sex, but he’d learned the hard way that depending on someone to be there for you was pointless, so he wasn’t much for relationships either. Hitting the clubs was the easiest way to take care of his sexual urges. He’d stepped out of his comfort zone often enough to keep from dying of unfulfilled lust, but the last few times he’d hooked up with someone in a grungy bathroom, he’d felt more sick than satisfied after it was over. For the last few months, he’d reveled in his nerdy side, the side of him that still hoped to go back to college, get his degree in chemistry, and then move on to grad school. Instead of going out he’d been spending his time off reading scientific journals and watching his favorite
Star Trek
episodes over and over. Perhaps he was experiencing temporary insanity from lack of sex.

Over the next few weeks, Jack and Gray became frequent customers at Nathan’s, and Mason never got tired of watching them. He often caught them giving each other appreciative glances, and while most of their casual touches fell within acceptable limits for straight-male camaraderie, their expressions were more tender than he would expect from hardened cops. He’d nearly convinced himself they were more than friends. Every time he saw something that hinted that they were lovers, he scolded himself for wishful thinking, but that didn’t prevent fantasizing about the two of them rubbing their naked, sweaty bodies against each other from becoming his favorite pastime. Jack and Gray had inspired a full-on cop fetish.

One night, the two cops came in when their shift ended. After eating dinner, they ordered dessert—tiramisu, Mason’s favorite. During a break in taking orders, Mason watched Gray stab his fork into the confection and then proceed to lick at it like it was a lollipop. It was the most erotic thing Mason had ever seen. Every swipe of Gray’s tongue made his cock throb. Finally, panting and painfully hard, he forced himself to turn away and think about things that were sure to make him lose his erection—disposing of the mouse traps he’d placed under the kitchen sink in his apartment or the dishwasher who’d started working at Nathan’s last week who had apparently never heard of deodorant.

When even those thoughts didn’t deflate him, he knew he had a serious problem. He didn’t have a break for several hours, and even if he could slip away, was he really going to jerk off in a bathroom stall at work like he was sixteen? He needed to get a grip. Clearly he’d been a recluse too long, but if he went clubbing with this obsession riding him, he would end up comparing every man he danced with to Gray and Jack. Chances were, he would find them all lacking.