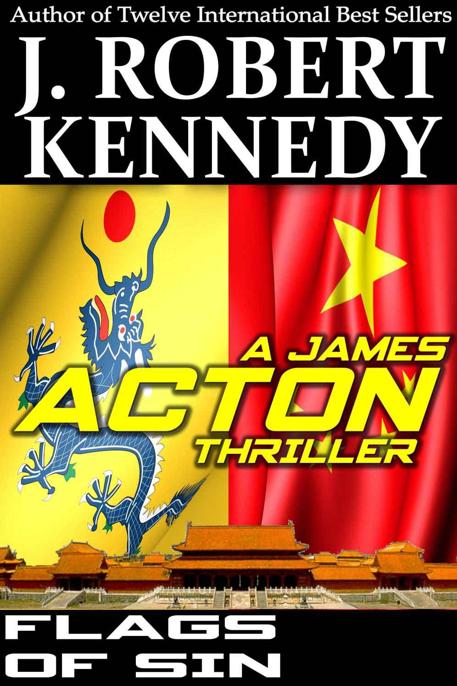 From the Back Cover

Archaeology Professor James Acton simply wants to
get away from everything, and relax. A trip to China seems just the answer,
and he and his fiancée, Professor Laura Palmer, are soon on a flight to Beijing.

But while boarding, they bump into an old friend, Delta Force Command Sergeant
Major Burt Dawson, who surreptitiously delivers a message that they must meet
the next day, for Dawson knows something they don’t.

China is about to erupt into chaos.

Foreign tourists and diplomats are being targeted by unknown forces, and if
they don’t get out of China in time, they could be caught up in events no one
had seen coming.

J. Robert Kennedy, the author of twelve international best sellers, including the
smash hit James Acton Thrillers, takes history once again and turns it on its head,
sending his reluctant heroes James Acton and Laura Palmer into harm’s way, to not
only save themselves, but to try and save a country from a century old
conspiracy it knew nothing about.

The Protocol has been on the best seller list in the US and UK since its release,
including occupying the number one spot for three months.

"If you want fast and furious, if you can cope with a high body count,
most of all if you like to be hugely entertained, then you can't do much better than J Robert Kennedy."

All rights reserved. The use of any part of this publication
reproduced, transmitted in any form or by any means, electronic, mechanical,
photocopying, recording, or otherwise, without the prior written consent of
the publisher, J. Robert Kennedy, is an infringement of copyright law.

This is a work of fiction. Names, characters, places and incidents
are either the product of the author's imagination or are used fictitiously,
and any resemblance to any person or persons, living or dead, events or locales
is entirely coincidental.

For those who struggle for freedom and democracy, wherever they may be.

On April 15, 1989, students began to occupy Tiananmen Square in the Chinese capital of Beijing.
These gatherings were initially to mourn the death of a liberal reform politician, Hu Yaobang, but over the next
seven weeks expanded into a general protest demanding freedom and democracy for the Chinese people,
with several hundred thousand students and residents participating.

On June 3rd, hundreds of thousands of troops from the Chinese 27th and 38th armies were sent into
Beijing with orders to clear the square by 6:00am on June 4th. They were opposed by thousands of Beijing residents and students, who erected barricades to block their progress.

At 10:30pm troops opened fire, and the tanks rolled over the barricades and their guardians.

And the rest is history.

In the West we call it the Tiananmen Square Massacre.

In China, it is known as the June Fourth Incident.

Today, China is thought to be a country with little dissent. What isn’t reported in the Chinese press, and
rarely in the Western press, is that in 2010, it is estimated that over 180,000 separate “Mass Incidents” occurred,
ranging from flash mobs to organized protests.

Dissent is alive and well in today’s China.

And dissent in today’s China, is still not tolerated.

Court of the Tongzhi Emperor

Li Mei
bowed to her emperor, deeply, and rushed to the crib holding the most precious
thing she had ever had in her charge. The future emperor. The future Son of
Heaven, and God’s ruler of all under Heaven. She was only fifteen, but already trusted
with the care of the most valuable child in all the world. It had been a shock,
she a mere servant in the nursery, but when the surprise announcement had been
made that the Emperor had a son, she had been chosen to care for it. The newly selected
wet nurse, and one of her best friends, Yu, had said it was the very fact she
was so young that she had been picked.

She was
too young to have yet been corrupted.

Screams
from outside the door, and the sound of a blade being drawn startled her. She
looked at the heavy wooden entrance, and knew the Empress Dowager’s troops were
just outside, pounding on the thick oak.

Her eyes
darted to her glaring master, and she immediately dropped them in fear.
Never
look your Emperor in his eyes. It implies equality, of which there is none.
“Sorry,
my Emperor.” She bowed then turned back to the crib, reaching in and picking up
the little bundle.

She spun
toward the door, and she could see the head of an axe being worked out from the
other side in preparation for another blow.

She
froze and a moment later the shadow of her Emperor graced her being. He rubbed
his thumb over his son’s forehead. She dared not look to see if the boy’s last
vision of his father was that of a smiling man, or a terrified man.
Smiling.
He’s nearly a God, what does he have to fear?

“Take
him out the tunnels, keep him hidden, and when the time is right, tell him who
he is. For he is the future. Today We may lose the seat of power to Our mother,
but We will never lose the divine right to rule this land. Today We die, so
that Our son may live to rule another day. Tell him it is Our wish that someday
he return here, return here and take his rightful place on the altar of power,
to lead his people into this new, maddening world.”

They
both turned to see one of the Imperial Guards pointing. The sturdy wood had
done its job, delaying their besiegers, but it was ready to give, it finally
able to take no more.

She felt
a hand on her back, and she almost dropped to her knees to beg forgiveness for
touching her Emperor, but it pushed her forward. “Now go!”

She
bowed, then ran, joined by a dozen guards, and another dozen servants, all who
provided the daily care their future emperor required, and would provide it
tomorrow, should they succeed in escaping.

But that
was still in question.

Yells erupted
from behind them, followed by bloody screams at the sound of the door
splintering open. Then the shouts of her brave emperor cut through the din of
chaos as his mother’s troops broke through. Swords clashed, steel on steel, the
shouts of the brave men fighting to save their Emperor, the shouts of those
same brave souls falling to the superior numbers. But it was the thought of her
Emperor, bravely choosing to remain behind, to delay the troops long enough for
them to get away, that filled her heart with pride and sorrow. He knew if he
fled with them, through the only escape route available to them, they would be
pursued. But by remaining behind, he gave his son a chance to live.

One must
die, for the other to carry on the family dynasty.

Then there
was silence, the swords still, and a voice, saying something she couldn’t hear,
the only noise now their own padded feet as they rushed down the corridor as stealthily
as they could.

There
was a thud, as if something blunt had hit something soft. A cry of pain and the
clatter of a sword hitting stone. Another thud, another cry, and she knew it
was her Emperor being hacked to pieces. She gasped as her chest tightened. She
felt as if she would pass out, and nearly dropped the now Emperor she clutched
to her bosom.

Hands
grabbed her by the arms as she collapsed, someone else reaching for the baby.
She held on tighter as she took a deep breath.
Be strong for the little one.
“I’m alright,” she whispered, as she regained her legs, and continued around
the corner, and farther from the horror she had just heard.

They reached
the end of the hall and a guard held aside a tapestry depicting the birth of
the Dragon King, one of her Emperor’s favorites, as another pushed aside a
secret panel. Through the opening she rushed, followed by the others, then they
waited as one of their guards sealed the secret passage, locking it from their
side so no one could pursue, or flee, should they know where it was.

For they
had been betrayed.

Betrayed
by someone amongst them. It was the only explanation for the ease of entry into
the Forbidden City. And it was her new, greatest fear, for she had been given
the honor of raising the young emperor, this tiny creature who was the greatest
threat to the future of the Empress Dowager Cixi’s reign, this tiny creature
who would be worshipped by millions of loyal subjects, none of whom would be
pleased once they discovered how brutally, and dishonorably, their Emperor had
been murdered.

She eyed
each of the soldiers and servants as they rushed down the dimly lit passage,
the only light from torches carried by several of the guard.

Which
one of you is the traitor?

Charles
Redford looked at his boss sitting across from him, Ian Davidson, the US
Ambassador to China, with a frown. “You read the security assessment by the
specialists, sir. You know there’ve been specific threats made against foreign
ambassadors over the past couple of weeks. And there have been dozens of
reports of foreigners being attacked and murdered. Something’s happening that
the Chinese don’t want us to know about.”

“Nothing’s
happening, Charlie. You worry too much.”

There
had been whispered reports from all across the country for weeks, mostly rumors
on the Internet, nothing in the official press, which didn’t mean much. The
official press in China was a joke. It was the State’s messenger of all that
was great about the Party. It was hardly a news source for anything internal.
But the Internet was so tightly controlled, that even the whispers of troubles
were being quickly quashed.

It
wasn’t until tourists stopped showing up for their return flights, stopped
arriving home, that the alarm bells began to go off. That was one week ago. The
first real requests for investigations had begun to arrive two days later, then
the specialists had arrived to do a security review to ensure the safety of the
American contingent in Beijing.

And
their preliminary report had sent shivers down his spine.

That’s
what Mr. White had said about their security. The words echoed in his head as
they drove toward the official residence. The weakest part of their security.
White had said the embassy itself was fine, and the residence was fine, but it
was the travel to and from that was
woefully inadequate.
It was
Ambassador Davidson’s insistence on driving by Tiananmen Square every day on
his way home. And his insistence on lowering the window while doing so.

“Are we
at least going to follow Mr. White’s advice?”

“Mr.
White.” He leaned forward, lowering his voice. “You
do
realize that’s an
alias.”

Redford
nodded. “Of course. I just assumed he’s CIA or something.”

Davidson
shook his head. “No, we wouldn’t risk bringing them in so obviously. No, these
are Delta Force—”