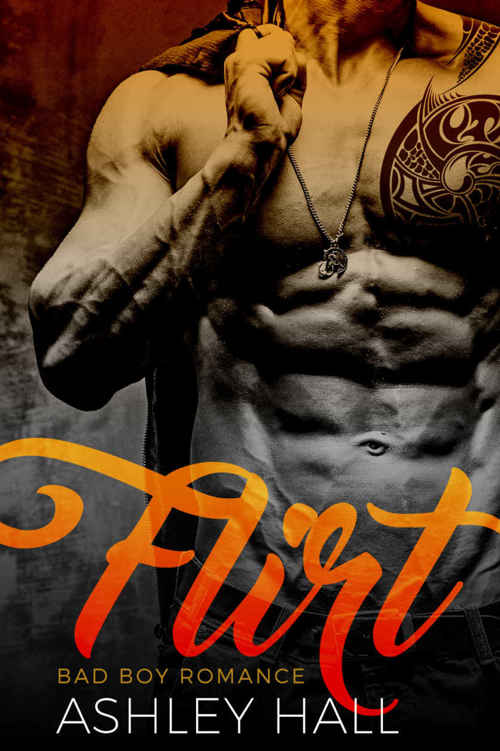 This is a work of fiction. Any names, characters, places, and incidents are products of the author's imagination or are used fictitiously and are not to be construed as real. Any resemblance to actual events, locales, organizations, or persons--living or dead--is entirely coincidental.

Flirt copyright 2016 by Ashley Hall. All rights reserved. No part of this book may be used or reproduced in any manner whatsoever without written permission.

She slammed my bedroom door shut. Damn, that wasn’t smart. We weren’t alone. The house held too many people, too many nosey people.

“You were supposed to sneak into my room,” I whispered. I’d wanted to go to hers, but she’d insisted. April liked to pretend she was in charge.

The beautiful eighteen-year-old didn’t say anything. Already she was pawing at me, rushing to undress me. Her hands yanked my shirt out of my jeans and she struggled to get it up and over my head.

“April.” I touched her wrists, halting her efforts. “There’s no need to rush.”

She narrowed her blue eyes at me. “I can’t stay here too long. If we get caught…”

“Don’t worry so much.” My finger traced along her jawline. At her sharp inhale, I grinned. “Why not make the most of our time—”

“Exactly.” April resumed trying to yank my shirt over my head.

I couldn’t help laughing. Her sense of urgency was turning me on. No matter how much I’d have liked to fuck her right that second, teasing her was just so much more fun. At least for now.

Her lower lip jutted out in a cute pout. “Why are you laughing?”

“Why not make the most of our time by enjoying ourselves for every…” my fingers brushed her hair from her shoulders, “…single…” I leaned closer and blew air onto her neck, and she shivered in response, “…second?” I kissed her just beneath her earlobe.

She moaned and held still, but only for a moment. Obviously, she’d given up on removing my shirt because now her hands were reaching for my belt.

This time, I grabbed her wrists and didn’t let go. With each step, I forced her backward until her legs bumped against my bed. She didn’t resist as I lay her down and pinned her there, straddling her.

“No more rushing,” I demanded.

“Slow and steady wins the race.”

She squirmed beneath me. “Who wants slow?”

“That’s good to know,” she murmured. Her hips lifted to rock against my cock. Damn, that felt amazing. When I didn’t pull away or stop her, she rubbed harder and faster, her breathing started to become heavy.

Laughing, I put some distance between us. No more dry humping.

“Ugh!” She closed her eyes and turned her face away.

“Stop rushing and you’ll get what you want. I’ll give you what you need.”

“You promise?” She peeked with one eye.

To answer, I kissed her. The first time I had kissed her, I had to press my tongue against her lips to part them. Now, she opened her mouth willingly for me. My tongue invaded her mouth, and I had to stop myself from grinding against her. It wouldn’t have been right for me to boast about my stamina and then come before I even entered her.

When I broke off the kiss to catch my breath, April giggled. “That wasn’t a slow kiss,” she teased.

I let out a snort. She was right. I had to keep my advice in mind. There wasn’t a reason to rush…as long as we kept quiet and didn’t wake anyone.

I swallowed her outcry with a soft, quick kiss. My lips then touched along her jawline over to the right, to her ear. “Trust me,” I murmured.

I pulled back to look down at her. Eyes closed, she nodded.

More kisses along her jawline to her other ear, then I sucked gently on her neck.

As long as she was quiet. If we were alone, I’d want her to scream, I’d make her scream. I had to settle for quiet moans tonight.

I pulled her shirt out of her skirt and placed my hands on her flat stomach, still kissing her neck. April shifted slightly beneath me. She was already getting desperate again. Couldn’t say I didn’t blamed her. I knew I was torturing her. If I kept this up much longer, I’d be torturing myself too. A good kind of torture.

Inch by inch, I moved my hands up higher until I wiggled them beneath her bra. Her boobs were ripe and full, and I squeezed them. We both hadn’t changed out of our clothes into our pajamas despite the late hour. Well, I slept in my boxers. April probably slept in a nightgown. A skimpy one…a sheer one.

My cock was growing harder by the second, straining against my jeans. Maybe she sensed it, or maybe she was growing more impatient, but April grabbed my face and pulled me down for a long, deep kiss while she pushed her body against mine, smashing her boobs into my hands, grinding her pelvis and making my cock twitch.

“Relax.” I pressed down with my hips and cock to keep her hips in line.

“You’re…terrible,” she said between breaths.

“Terrible?” I grinned. “I like the sound of that. Terrible, wicked, sinful…”

She opened her mouth, and I stuck my tongue inside. Just a quick taste. Before she could groan, I lifted her shirt to her neck and slid up her bra to free her boobs. I gently pinched her hardened nipples, rolling them between my fingers.

“Do you like that?” I whispered, my mouth inches from hers.

“What about this?” I lowered my head and kissed a nipple.

“And this?” I sucked on the other nipple.

I pulled back and lifted up so I was kneeling. “You can’t be too loud,” I warned. “You wouldn’t want us to have to stop, would you?”

“Can’t take what?” I smirked. Driving her crazy was my specialty.

“Isn’t that a good thing?” I rolled my hips so she could feel just how hard my cock was through her thin skirt.

April lifted her upper body off the bed to punch my shoulder. “Stop laughing at me or else…”

“Or else what?” I smiled down at her as I laid my upper body onto her to force her to recline again. “We both know you aren’t leaving here.”

“I will. I’ll go.” She jutted out her chin. God, she was cute when she tried to act all in control like that.

“Go back to your bedroom? All alone? Without being satisfied first?” Again, I pressed my cock against her, rubbing her through her skirt.

She moved her hips as best she could to mirror my movements. “Please…Wes…I can’t handle it.”

“What do you want?” I nipped at her lower lip.

“Tell me.” My tongue flicked against her nipple.

April wiggled and squirmed before trying to lean forward. Maybe trying to force contact between her nipple and my mouth again, but I just stared down at her, waiting. Damn, she was beautiful.

“What do you want me to do?” I asked, lightly running my fingers over her boobs, paying special attention to her nipples.

April’s eyes started to roll back into her head. “Please…”

I pinched a nipple, and she gasped. “I don’t know what you want unless you tell me.” Grinning, I lowered my hands down her stomach to the top of her skirt.

“Where? Here?” I brought my hand back up and caressed her cheek.

“Here?” I tickled her from her hips up to her side, my fingers stopping before they neared her boobs.

She shook her head. Her cheeks were pink. April was getting all worked up.

“Here?” I slipped my hand beneath her to squeeze her ass through her skirt.

I moved my body down some so I wasn’t straddling her quite so high. Now I could touch her knees. Slowly, I inched my hands up her legs. Sucking in a breath, April held perfectly still. Higher and higher my hands went, but just before they touched her pussy, I leaned back and crossed my arms so only my knees and lower legs were in contact with her body.

“Tell me what you want,” I murmured, “or else I’ll throw you out of my room.”

“You can’t. You have to…” April closed her eyes and swallowed. When she opened her eyes, all I saw in them was lust. “Give me everything. All of you. And give it to me now!”

She wanted me all right. I had her just where I wanted her.

“You want me to give you everything?” I leaned down so my body touched the length of hers. “What if I don’t want to?”

“Is that what you want? My cock?” I pulled back slightly.

“To what?” I asked innocently.

“To fuck me.” She was fuming mad, and seriously, that could not be any hotter.

Her hands gripped my shoulders, and she sat up, forcing me back, although I allowed her to. To my surprise, she shoved me to the side and got off the bed and onto her knees.

“You’re going to be the one lying down now,” she said with a gleam in her eyes.

April pushed me onto the bed until I was lying down, my legs hanging over the side. My cock never felt this hard before. Her hands returned to my jeans, and after she unbuttoned and unzipped them, I lifted my ass so she could slide them down. Them and my boxers. My cock jumped out. I thought freeing it would ease some of my frustrations. No. It only increased them. I was dying to be touched.

She licked her lips, eyeing my cock, and I realized what she was going to do. I couldn’t believe it. April never looked more determined, but she was also blushing furiously, obviously trying not to look nervous.

It was ridiculously hot that I had been her first everything. Her inexperience was a potent combination of cute and sexy. I’d never take advantage of her innocence. I made sure she wanted anything and everything we did.

And, damn, did we both want this.

April swallowed. She touched my cock, wrapping both hands around it. Tentatively, she licked it.

What a tease. I knew she wasn’t trying to torture me, but holy hell, she was.

Another lick. Her hands moved up and down my shaft not nearly fast enough. I could only tolerate that for so long. No wonder she’d been so frantic while I’d teased her with slow-burn foreplay.

Turned out that a minute was my threshold. I leaned on my forearms to lift my upper body so I could better see her. “You’re nervous, aren’t you?”

“Not at all.” She dipped her head down, and her hair fell forward to half shield her face.