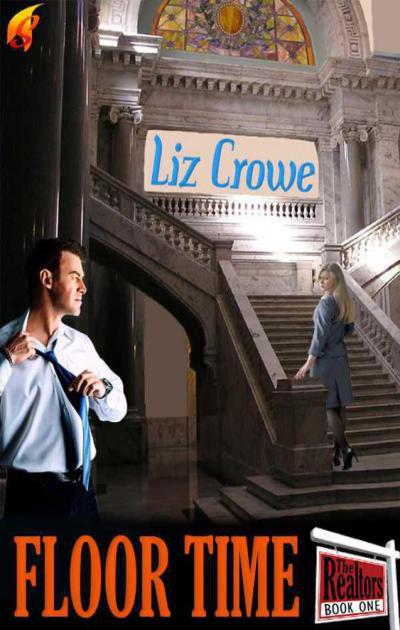 This ebook is licensed for your personal enjoyment only. Ebooks may not be re-sold or given away, except as provided in promotions sponsored by Tri Destiny Publishing or the author. If you would like to share this book with another person, please purchase an additional copy for each recipient. If you are reading this book and you did not purchase it, win this copy during a promotion or, if not purchased specifically for your use only, then please delete this copy, notify us at
[email protected]
. We encourage you to purchase your own copy and support the author's hard work in their craft.

Sara put her palms against the ice-cold glass of the floor-to-ceiling windows. She smiled, observing the entire downtown of Ann Arbor spread out below her like a child's carpet map. The heat rose visibly from the pavement as the crowds scurried in and out of restaurants and shops.

Adam's arms around her waist startled her. As she turned, a niggling voice at the back of her brain made her hesitate before brushing his lips with hers. They'd been in the vacant condo way too long. Now that he'd teased a satisfactory orgasm from her neglected body, an antsy, nervous sensation wormed through her psyche. She sighed and disentangled herself from his embrace.

When the doorbell echoed through the cavernous space, she broke out in a cold sweat. Fumbling with blouse buttons, she pushed past Adam on her way through the kitchen and to the door, cursing under her breath. She looked back to make sure he was pulled together -- not a tough thing since neither of them got completely out of their clothes -- and scowled as he gave her a knowing smile.

Shit. You should not have done this. You don't even really like him. But it had been so long and he was pretty good looking. Jesus, slut much Sara?

Sara let guilty thoughts clang around her head long enough to hear the doorbell ring once more before yanking it open, her perfect pleased-to-see-you sales smile fixed in place, keys clutched in one hand.

Jack had a hot date, one that was going to yield him a kick-ass listing, but due to the unwarranted dawdling of the condo-shopping couple he had been dragging around, he'd be lucky to make it in time. The empty lock box on the door of the penthouse unit provided the real icing on the cake. He leaned on the doorbell, hoping they could skip this one and stop wasting his time while mouthing platitudes to his clients. He had hoped that the relocating, executive couple like the ones he was courting at that moment wouldn't spend so much of his valuable time arguing over granite colors and the relative benefits of central vacuum cleaners. God, he hated this job sometimes. He smiled, and turned, hearing the click of the deadbolt. Finally.

When the heavy door swung open, the vision standing there froze him mid-sentence. Sara Thornton, one of the newer, and more successful, realtors at Stewart Realty, stared at him, eyes blazing in a strange combination of aggravation and satisfaction. Jack clenched his jaw at the sight of her smoking hot body encased in skintight short black skirt, creamy silk blouse and four-inch patent leather heels.

As one of the ones chosen to populate the downtown, storefront office, based on good looks and the ability to rope in new buyers and sellers off the streets of Ann Arbor, Sara had serious sales skills. He'd studied the branch's numbers as part of a management decision-making process, ultimately turning down the offer to handle that stable of prima donnas. But at that moment Jack couldn't believe he'd never noticed her before --
really
noticed her. Where had she been hiding? And what was that amazing sexy aura that permeated the air? Jack's heart jumped in his chest.

"Um, hi Jack," her voice was hoarse, making him blink. He made a conscious effort to wipe the idiotic look off his face, aware of the annoying clients still standing at his elbow. He held out a hand, needing to confirm that her skin felt as hot as it looked. Surprised no one else saw the sparks pass between them, he couldn't suppress a grin at the look on her flustered face.

So, she sensed it too. This could get interesting
.

"Sara," he heard his own voice, sounding a hell of a lot more confident than he felt at that moment. And he did not rattle easily. "Sorry to barge in but," Struck dumb once again by the sight of Adam Donovan, mortgage broker tool, at Sara's shoulder Jack gave himself a mental shake. The sudden realization of what had undoubtedly happened, in the same condo he was about to show, made his head pound. Reluctant admiration mixed with something resembling jealousy fogged his brain. He raised his eyebrows at the tall blond man whom he could have sworn was engaged to someone else.

"Jack," Adam moved around the beautiful woman who still blocked the doorway. "Good to see you."

Jack shook the guy's hand, never taking his gaze from Sara, reserving his smile for her. His brain engaged, focus locked on Sara Thornton, and the world shifted under his expensively clad feet.

Sara had never been more embarrassed. No, that was too weak of a word -- mortified was better. Jack Gordon, king of the Ann Arbor real estate universe wanted to show the condo where she'd just let Adam Donovan mercy fuck her. As she tried not to drown in Jack's deep blue gaze, Sara clenched her thighs, already imagining how he might have done it differently, and likely better.

"Um, hi Jack," she croaked out. Her face flooded with heat; even more so when she put the keys in his outstretched hand, and yanked herself back at the intensity of their instant connection.. Tall, ruggedly handsome with coal-black hair and a shimmering blue gaze, the man boasted a personality that bested all other males within a fifty-mile radius. Sara only knew of him, of course. They'd never actually met. However, she'd swear right then he seemed happy to see her. The realization made her zing from scalp to toes.

She watched his full lips form words but remained deafened by the roaring in her ears. His gaze never left hers, even when Adam nudged her aside and shook his hand. Her whole universe suddenly shrank to two people. Looking back, she'd pinpoint that as the instant she fell hopelessly in love with an impossible man.

Sara sat straight up in the bed; the sheet wrapped around and between her legs, the alarm jangling in her ear. Breathing raggedly, she ran her hand through her sweaty hair.  She came to grips with the fact that she had been dreaming about Jack Gordon -- again. she also realized she had come, in her sleep.

Her mind skipped through the long list of tasks she had to get through that day. She glanced at the clock -- five a.m.; an ungodly hour, but the only time she could fit in a run. Sighing, she flopped back onto her pile of pillows and closed her eyes, foregoing the run and hoping for one more hour of blessed oblivion, before tackling the hectic workday ahead. She had a couple of deals on the ragged edge of falling apart, plus new buyers to mentor, and a few sellers to hand-hold; not to mention a huge transaction that she held together with a glue stick and the sheer force of her will.

How could she have known she'd encounter Ann Arbor's most successful realtor most eligible bachelor on the same day she'd finally shaken off her losing streak with guys and apparently scored with Adam? Jack's mischievous grin and deep blue eyes as he had appraised her frazzled, post-orgasmic self, had left her speechless that day and haunted her days and nights ever since, even with Adam.

Showered and dressed by nine, Sara headed out the door on her way to the office when her phone buzzed. A mystery number, but she took the call anyway, as any decent realtor would.

"Sara Thornton," she grabbed her laptop, mind half on the to-do list already.

"Hey, Sara, it's Jack," the deep voice that had invaded her dreams that morning seared her nerve endings. Sara's hand tingled where he'd touched her that day when she'd handed over the condo keys.

"Oh, um, hey there, what's up?" Laptop forgotten, she slumped against the wall, hearing herself babble.

"I just wanted to tell you about a house I listed."

Sara tried to calm her breathing, and let him fill the silence that ensued.

"Yeah, I got it signed up yesterday, actually. It's in your neck of the woods, where you do a lot of business."

"Where? I mean, I've got listings sort of all over right now." She swore at herself for sounding like a stupid rookie.

"I know, but you tend to list in the Lansdowne area a lot, right? I've got a great deal there  --  kids listing mom's house since she's moved over to the retirement village."

"Um, sure, well, I grew up there so everybody pretty much knows me." Sara's sales hackles rose at the thought that someone had taken a listing out from under her. She had just that week met a woman who was considering listing her mom's house -- a striking tall blond, who had seemed ready to sign with Sara but had "one more agent to meet first." Sara realized who that "one more" must have been. Her face flushed with anger, no longer aware of Jack as a desirable man, but as a client-stealing asshole. She stomped to her car, jerking open the door and tossing her stuff into the back.

"Yeah, my uh, client said she knew you, but I guess she liked me better," he chuckled.

"Oh, it's one of the tri-levels, a piece of shit really, grandma's décor and the whole ten yards. But hey, it's Lansdowne, right?" Sara sucked in a breath.
Bastard knew how to turn the knife, now didn't he?

"Yeah, okay, how much," she ground her teeth. "And you'd better give me a number somewhere north of three hundred."

"Oh really," he teased, perhaps not realizing she was serious. "And why is that, pray tell Ms. Thornton."

"Because, you jerk, 'it's Lansdowne' and I have some credibility there, telling people value all the time." Realizing she'd called him a jerk, she groaned to herself.

Nice one, Sara, way to impress.