Read Fly On The Wall: Fairy Tales From A Misanthropic Universe, Vol. I Online

Fly On The Wall: Fairy Tales From A Misanthropic Universe, Vol. I 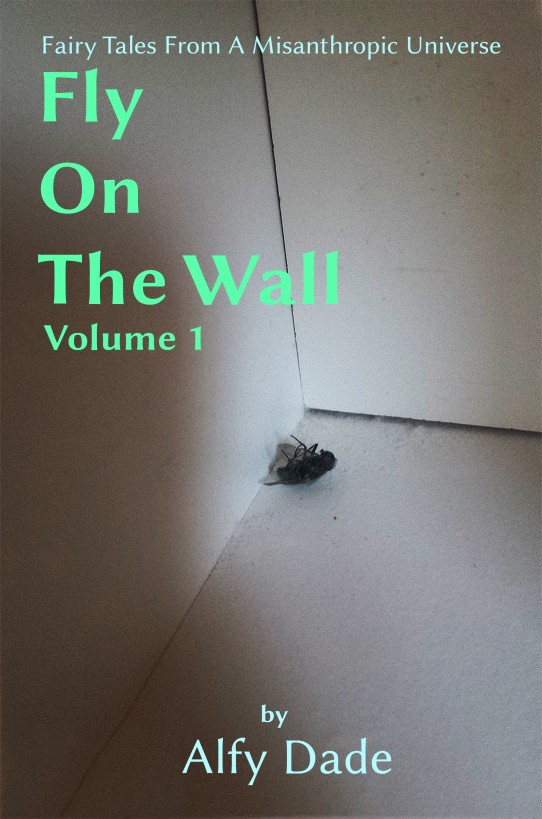 FLY ON THE WALL: VOL I

Fairy Tales From A Misanthropic
Universe

21 – The Light Under The Stairs

"I'll miss you, daddy, I always worry when
you go away,” retorted Sarah in high pitched tones.

“It's just a business trip darling, I'll be
back before you know it. I promise!”

She looked at him and pondered what would
become of him, of her and of everyone she knew, she was
particularly worried about Fluffy, an 8-inch tall pink bunny.
Fluffy had yellow ears with floral stitching inside. Sarah loved
Fluffy dearly, but not quite as dearly as she loved her own father.
“Here,” she held the small stuffed rabbit out to him, “Fluffy will
keep you safe, even if I can't.”

He looked at the little bunny being thrust
towards him, it's beady eyes challenged his choices. One could see
the exact moment in which his heart broke in two. He wondered what
would become of him, of Sarah, and of everyone they knew. He cupped
his hands around the back of the precious bunny and gave it a small
kiss before tucking it into his jacket pocket. Fluffy fit
perfectly, and as usual had a good view one almost as good as the
view he would have from thirty thousand feet. He boarded the plane
with Fluffy the silly rabbit in tow. Sarah stayed and waited for
his return.

These days Sarah just watches rain streak
down the window - drop, by drop, by sullen drop. She wonders what
became of her father and Fluffy. She'd seen neither since that
fateful trip. She wonders what had become of the plane too, though
she supposes it really doesn't matter.

At least they are with me now, within this
silly rain, the one just pouring down my windowpane.

Every year on this day, it rains a silly
rain, and every year on this day, the final drops mirror her final
tears. The little girl is little no more, now she stands strong
against fates' cruel jokes. She swats at a fly which buzzes past
her head, annoyed. The sadness she had felt for so long is no
longer there, now she can rest. She hopes that next year it won't
rain.

BANG. To the ground he
fell.

ZAP. The wires arced. They had
shockingly recently claimed another victim.

REW0000WWWWEEEEEEJ000 went the
ambulance as it rushed George to the hospital.

1 Month later he awoke. Alone. He rang
for the nurse. She rushed in, and with her a gaggle of residents,
and behind them behind a doctor – their mentor. The nurse had been
sure of his imminent demise so her surprise was palpable. The mass
of bodies fretted and fussed over him. Their excitement was almost
too much for George to bear, and somehow he almost longed for the
peaceful nothing of the past few months, it had been just him,
alone, and his thoughts.

2 weeks later he left the hospital.
Alone. He rang for the taxi, it rushed up to him at the entrance,
as did a gaggle of reporters, with their camera crews nearby
behind. His zap had clearly made the news, he had managed to short
the grid, and his survival itself was nothing short of
electrifying. Cameras clicked and flashed, questions assaulted him
from every direction. He almost longed for the silence of the
hospital, it had been just him, his thoughts, and his medical
team.

1 week later he posted an
ad. Alone. It went: “
You know me, I
brought down the city grid 2 months ago with my literal bare hands.
It happened because I was distracted by you, the most beautiful
girl in the world. When you walked by with your purple handbag and
raspberry beret my mind froze, and my heart rose to stratospheric
heights. I didn't believe in love at first sight, not until I saw
you. Let's meet, hopefully this time sparks won't fly.”
N
obody came this time,
and he almost longed for the reassurance of the interviews and the
company of the press. The ever clicking cameras and their blinding
bulbs had kept him from his thoughts.

3.5 days later he got a
response. He read it, alone. “
This is her
friend,
” the e-mail began, stirring hope
within his heart.
“She died that fateful
day,”
it continued, shuttering what little
optimism had grown,
“the grid went down
and she was struck by a driver who'd had no light saying whether to
stop or to go, I'm sorry”
. Again, he was
alone.

Everyone ducked. Well, almost everyone,
somebody had to fire the gun after all.

One woman stood alone, in a red sun dress
and white cowboy boots. In her hand was a magnificent 1911, inlaid
with a mother of pearl grip and plated in tiger—stripe gold. Wisps
of smoke as delicate and beautiful as her ginger hair escaped the
muzzle.

She would not live long. It was not meant to
be, her crime would see her put to death as surely as the sun set
in the East. It had not been easy finding the 1911, they were
highly sought after antiques. 1911s and all other guns which had
been produced since the great leap backward. At least he was dead
though, never to institute or instigate any further leaps, be it
forwards or as in this case backward. It had been 400 years since
scientists had managed to reanimate the dead, and what a tumult it
had been. Villainous historical figures no longer lay entombed in
dirt but instead stood and greeted children in great enclosed
amusement parks. Though they were bad they were not stupid and soon
they escaped. From Stonewall Jackson's zombie uprising to Putin's
zombie nudist park, good brains, and intellectuals were now few and
far between. Especially since zombie Lenin's great leap backward.
At least he was dead, 3 to the head to make sure he's dead,
right?

W
ell at least that did it,
she
thought to herself. Little did she know that according to Zombie
Law per the Brains act 3007 s.63b(rains), she who kills the lead
zombie rules all zombies. It was an archaic law after all, until
now only used thrice. And so Jen became the head zombie, setting a
new record for the highest position ever held by a living
one.

It was a day unlike any
other. John the perfumier had just finished work and entered the
nearby park. It was 28 degrees and John had his typical lunch with
him. It didn't seem like all that unusual of a day, to John at
least. Cars drove past, dogs barked, cyclists ran stop signs, and
vengeful pigeons shat on passers-by. Even the garbage flies buzzed
joyfully around the typical piles of city trash. What was unusual
was that John had not eaten his lunch. John always ate his lunch.
John religiously observed routines. Every moment of every second of
his life was planned out a few weeks in advance.
"How you can plan love,
”
you might be thinking. If there was anyone that could, it was John.
His obsession was his love, it was worship, he sought no
everlasting life, but rather ordered contentment
instead.

It bothered him that his lunch
remained uneaten. He didn't understand what had come over him. He
hadn't eaten it. Why what was wrong? Was he not hungry? No, it
couldn't be that. That wouldn't explain his current craving, a
strong one too it was for something he himself could not explain.
Need overrode any explanation. His body yearned for it – whatever
'it' was. Shivers slithered down his spine, and John smacked his
lips. But for what though? He did not know. He needed it bad, he
needed it so.

Jack walked into the park. Today was
the day, and no more time could pass. It had to be – now or never,
and never was any option at all. Out came the pipe. Out came the
sickly sweet resin which brought sense to life. Out came the
lighter which illuminated his mind and ideas. Out came the smoke,
billowing, beckoning, calling him forth into evanescent
ecstasy.

John smelled something, he did not
know what it was but knew it was what he needed. He walked to it
aroused. This was surely what he sought. John's perfumery needed
it, this true, liquid, love. He came across a scruffy bum holding
what looked to be a pipe, thence emanated the honeyed phantoms. It
was what he wanted, what he needed. He ran at the bum and snatched
his pipe, he threw his lunch (now quite pleased he hadn't eaten it
before) at the man, and ran faster still clutching his purloined
loot. John sniffed the pipe. His heart beat fluttered at the
thought of putting it in his mouth and sucking with delight, the
wrongness of his actions had yielded delectable forbidden fruit.
John yearned to partake but decided to leave it for the evening
time.

Later that day John was arrested for
possession of opium. He didn't even get to try it before that, in
some ways it was a day like any other.

"Hello" responds a redhead
from the corner of the room in saccharine, melodious
notes.
“
Who are
you?” Her lilac dress swirls in the gentle draft like a jellyfish's
mane in ocean currents.

“Who am I?! Who are you?" incredulous
trench coat barks back, almost as though it were his home. It
could, of course not be, for it had no furniture.

“You know me.” With each passing
moment, she seems more and more like an apparition.

"I really don't.” Sullen silence falls
on all. The trench coat seems to shake, its bearer trembles,
furious. The only thing which keeps him civil are the endless rays
which stream onto her perfect skin. “I know my furniture is gone; I
know that you are in my house. I … I know that I love you.” the
aviators rise an inch, revealing a contorted face behind them, one
shocked by its the admission to the ginger stranger.

She nodded, knowingly, “I am the one
who has always been near. I am the floater in your eye, the
peripheral sparkle. I am the sunrise, the sunset, the dusk, and the
dawn. I am good, I am evil. I am. I will always love you, but we
can never be, for I am me."

The trench coat awakes in a gin-cloud
and slumped over a vomit soaked couch, not knowing what had
happened. All that is left now is an ephemeral memory. He looks at
the corner of his room, where his fuchsia stands. Its perfect
curved form resembles that of an illustrious ballerina. He puts it
down to the weird cheese he'd eaten last night and continues with
his life. Each time his eyes came upon the fuschia, he knows
something happened and each time he wonders what. His fates bade
him live, and so he does, his furniture he will keep, but knowledge
he will not.