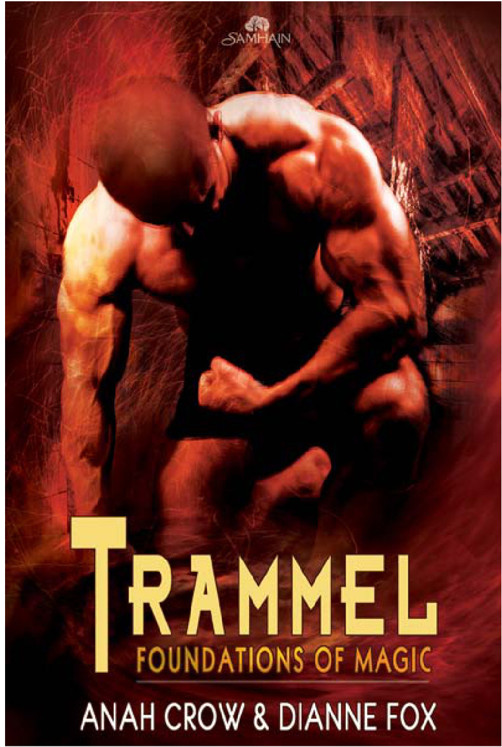 Neither love nor magic comes without cost.

In the relative security of Atlantic City, Lindsay feels safe for the first time in his life. He and Dane even sneak away from their mage “family” for the occasional date.

All that ends with the arrival of Noah, whose magic is a pure, wild fire fueled by terrible grief over the loss of his wife. To Lindsay’s great surprise, he is assigned to be Noah’s mentor, protector and healer.

Of course, his efforts to help Noah master his immense power aren’t without a few fiery slip-ups.

Just as Lindsay is rising to the challenge, word comes that Moore, the scientist who once imprisoned Lindsay, holds a young girl who has manifested a powerful new magic. The desperate mission to free her leaves Noah severely wounded, Dane captured...and Lindsay in charge of those who remain.

The fate of Dane and the lives of the family rest on Lindsay’s untested shoulders. He must trust in himself and his growing connection to Noah to save his lover, his friends, and everyone else who will suffer if Moore’s plans go unchecked.

To the families we’ve made: Blood may be thicker than water, but love is thick like honey.

There were only a few photographs left in the box. Noah took one out carefully, holding it by a corner. One wrong thought and it would go up in flames. The carpet under his feet was dusted with ash and spotted with burns. Cradling the photo in his stiff hands, he sat on his bed and let the image draw him down into his memories.

Sun spilled across a stony beach and a sapphire lake, shredding into shadows and rays on the points of pines and cedars. Noah sat on a stone that jutted out into the lake like a prow and then plunged away hundreds of feet into the dark. Here, a glacier had pulled up short thousands of years ago, thought better of crawling south, and turned around to slink home, leaving a chain of lakes behind like footprints.

All around him, Noah could feel the weight of time and distance as well as the ephemeral presence of sun and stone and water. His camera was a familiar weight in his hands as he waited to capture the next perfect moment.

“I can’t believe you won’t come in.” A woman pulled herself up onto the stone at his feet, sprawling there like a mermaid. “You’re such a baby.” Her hair, wet, was barely darker than the sunlight. Her eyes were the same color as the lake.

“It’s cold,” he pointed out. He hated being cold.

“Only for a minute.” She got to her feet and took two steps closer, but turned her back on him and faced the water. “You can get used to anything, Noah. You’re strong.” She glanced back at him, just long enough for him to preserve her laughter, then she was gone.

One step, two steps, and her feet were off the ground. She was a pale sickle cutting the water. The water closed over her and all he could see was the white ghost of her diving deeper than he could go.

“She’s right, you know.” Noah’s sister sat on the bed beside him, bouncing him back into reality with her arrival.

Noah wiped his tears from the glossy face of the photograph. In the picture, his wife was still looking over her shoulder at him, still laughing.

“I don’t want to get used to it.” It hurt to move, but Noah pushed himself to his feet and took the photo back to the box on the table by the window. “I want to go swimming.”

“I don’t trust you to actually
swim
,” Rose said dryly.

“I’m not going to kill myself.” Noah was past the point of doing more than wishing for death.

“Being alive is punishment enough now?” Rose lay down on his bed with her head on his pillows.

Looking at her had been like looking in a mirror, once. Now there was barely any familial resemblance. His hair was gone, his neck and jaw twisted with scars, his mouth twisted with pain.

Rose was right. Of course she was right, she was cherry-picking in his brain.

“Why are we talking?” Noah sat on the hope chest at the end of his bed, on one of the myriad quilts that cluttered the family home. His mother had eight children and a farm, and she still had to ward off boredom by making enough quilts to bury them all twice over.

“Because you’re keeping me out.” There wasn’t any criticism in Rose’s tone. Noah looked back at her and winced as fragile skin and scabs cracked on one side of his face.

“Am I?” He turned his attention inward and he could feel it, all the halls and doors of his mind overgrown and choked with the clutter of every bit of Elle he kept hoarding so he wouldn’t forget her.

Behind it, in the center of him, there was a fire burning. “I’m sorry.” His hands were rough with scars when he covered his face with them.

“Noah. Noh. My Nonoh.” It was what she’d called him when they were babies.

Her soft arms wrapped around him from behind. They were almost a year apart, but they might as well have been twins. She cradled him against her; his back was barely scarred and she could rest against it.

He could feel her strong heart overriding his, like it was beating for him.

He exhaled and pushed open the nearest door by leaning his will against it. “It’s a mess in here,” he warned her.

“I know. I’ve been in here enough since you came home.”
Her voice wasn’t outside him anymore.

“Someone had to keep it up until you came back. You were gone a long time.”

Gone. Not the time he’d spent away from the family, from the Quinn enclave deep in the Canadian North. Not the time he’d been out in the world without any magic to call his own. No, he had only truly left after the accident that had taken his wife. It had taken Elle and given him the magic he’d once learned to live without because he had her.

Gone. Every day, he woke on fire, his nerves screaming with the memory of burning and the absence of her and the heat of his wild magic. Every day, he was sorry his father had brought him back from the human world, dying—trying to die—and full of fire.

“You have to forgive the magic,”
Rose said quietly. In his mind, she was sitting in the secret fort they’d shared as children.
“It didn’t hurt you, it didn’t take her.”

“I know.”
Noah sat on the dirt floor and picked up a twig to scratch at the earth.
“You’d think I’d be
able to make up a story I could live with. About how it was worth it in the end.”

“You used to tell the best stories. But you can’t make up stories like that.”
When Noah looked back at Rose, she had a rag doll in her lap.
“Those stories, you have to live, if you’re ever going to believe them.”

“Are you knocked up again?”

The moment broke and Rose tumbled out of his mind even as she fell back on the bed, laughing.

“You’re not the problem child around here, Noah,” she said, still laughing. She propped herself up on her elbows and shook her wild chestnut hair out of her face. “You just have problems.”

Noah held his hand out to her when she reached for him, the hand that was still missing the finger that had worn his wedding ring. She was careful not to tug too hard. The healers—his mother and Alice-from-up-river—were still working against his magic and his memories to heal him. The scars on the soul, the saying went, would never leave the flesh until they healed within.

until he was lying beside her with his head on her shoulder. Once, it had been the other way around. Once, he’d been the one to hold her; his familiar thoughts and his impotent magic had made his presence tolerable, even with her mind torn wide open.

When their father thought she didn’t need him anymore, he’d left the enclave and he couldn’t be there for her. She’d had her magic and all the pain it gave her and he’d had nothing, and he would have traded places with her in an instant.

“I know you would have,”
she said, in his head.
“Like I would now, except that it really is beautiful
on you.”
In her third eye, he was a pillar of sunlight with a halo like the heart of a candle flame.
“It’s yours.

You’re going to be amazing.”

“Telling futures now?” He closed his eyes and listened to her sturdy heart.

“Best fortune teller is the past,” she quoted. “You always were amazing, Noah. You didn’t need magic to be magical. You’re not the one who watched you being beautiful all those years. People want to love you.”

“That’s what they call irony,” he said dully. Beauty was going to come slowly, if it came at all. There was only one love he wanted and the long years of his mage life stretched out like a galaxy between them now. Maybe he’d get— “Ow!”

Rose’s sharp nails left cruel little crescents of pain on his ear. “None of that.”

“Sorry.” Noah let the thought go and was rewarded by her kiss on his too-hot, too-thin scalp. “So, who’s Dad gonna kill this time?” He laid his hand on her soft belly, wondering who was in there instead of wishing he were dead.

“I have a list,” Rose said unapologetically, making him laugh with it.

“I love you.” He said it inside and outside.

A knock on the door was followed by the handle twisting and a dark head poking in. Ruthie.

“Hey, little bit.” Noah took a deep breath and pushed away all his negativity as he struggled to sit up without wincing. Ruthie was still waiting for her magic, still a spindly girl with unraveling braids and skinned knees. He always put on a good face for her. “Did you need something?”

Nathan had been sent all the way to Ireland, to a druid henge that needed a healer ready to step into the place left when one of the elders passed. The letter had come to them by way of the Australia Quinns, and Nathan had leapt at the chance to leave, even though it meant he might never return. That he’d come home could only mean one thing.

Cyrus: Swamp Heads by Esther E. Schmidt
The Secrets of Midwives by Sally Hepworth
In My Father's Country by Saima Wahab
Snow Apples by Mary Razzell
Maxwell’s Match by M. J. Trow
Breathe by Abbi Glines
The Drop by Dennis Lehane
No Regrets (Bomar Boys #1) by Jess Bryant
Dreams of Shreds and Tatters by Amanda Downum
Milo and the Pirate Sisters by Mary Arrigan