Read Fool on the Hill Online

Fool on the Hill 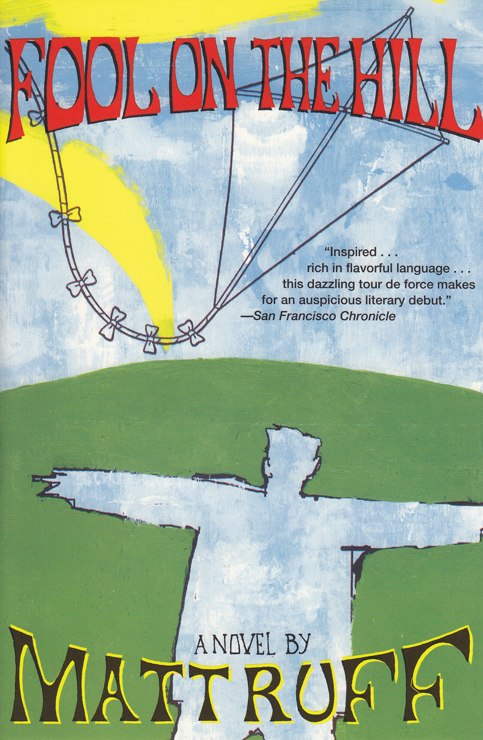 All rights reserved. No part of this book may be reproduced in any form or by any electronic or mechanical means, or the facilitation thereof, including information storage and retrieval systems, without permission in writing from the publisher, except by a reviewer, who may quote brief passages in a review. Any members of educational institutions wishing to photocopy part or all of the work for classroom use, or publishers who would like to obtain permission to include the work in an anthology, should send their inquiries to Grove/Atlantic, Inc., 841 Broadway, New York, NY 10003.

Fool on the hill.

to the Bohemians, with gratitude,

to the Grey Ladies, with affection,

and to Lady Chance,

Cornell University is a real place, of course, and any number of interesting true stories could be, and have been, told about it. But
Fool on The Hill,
while making mention of a number of actual events and local legends, is first and foremost a work of fiction. The Cornell depicted within these pages is a shadow Cornell, like the real one yet unlike it; the characters who live and love here never existed, though perhaps they could have.

History buffs are warned in advance that even where the author has strayed into the realm of real events, these have often been altered to better suit the story. One example that requires mention has to do with the '69 black students' takeover of Willard Straight Hall. In this book, the mythical fraternity Rho Alpha Tau is credited with the Saturday morning “commando raid” in which a group of whites attempted to retake the building; in real life, the majority of the raiders were from Delta Upsilon. Despite the substitution, the author in no way means to imply that D. U. is in any other way similar to his Rho Alphas. Hopefully no fraternity is, though it might be nice to find a real Tolkien House out there somewhere.

Thanks are due to the following individuals and organizations, with apologies to anyone I've forgotten: Professors Bob Farrell, Alison Lurie, Lamar Herrin, and Ken McClane of the Cornell English Department, as well as my agent, Melanie Jackson, and my editors, Anton Mueller and Morgan Entrekin, for seeing this book through to the light of day; the City of Ithaca, Cornell University, and Prudence Risley Residential College, for giving me something to do for four years; Jeff Schwaner and Lisa V. for best friendship, poetry, and cheap beer when I needed it; Susan Hericks for being the only real saint in town; Thalia for motherly advice; Suzie Q. for loss of innocence, Julie K. for loss of confidence, and Muffy for the real McCoy; Chuck for more cheap beer; and Jenny New Wave for just being himself.

Thanks also to Erica Ando, who I really did write a book for; to the people at the Dewitt Historical Society who helped me do some last-minute

research; to Brad Krakow of Risley Dining, who kept me wired on free coffee; to the Risley Hall maintenance staff, who number with the angels; and finally to the members of Cornell Public Safety and the Ithaca Police Department, who helped out on some technical stuff and who are actually far more relaxed and less Clint Eastwoodâlike than depicted here. Should they ever get around to sending my girlfriend's fingerprints back, I will like them even better.

Calliope,
the most beautiful woman in the world

Myoko,
Queen of the Grey Ladies

Hobart,
Eldest and keeper of the Chimes

Jack Baron and the brothers of Rho Alpha Tau

Ezra Cornell as himself

Mr. Sunshine first enters the city near dusk of a spring day in 1866, after heavy showers have turned its dirt roads and streets to mud soup. This is not the sort of weather that Mr. Sunshine prefers, but he is drawn on by a smell, a sweet smell that cannot be covered or washed away by the scent of fresh rain: the smell of Story.

The city lies in a valley along the shore of a long lake, and takes its name from a Greek island so distant as to be little more than a dream. Ithaca, home of the fabled Ulysses. Mr. Sunshine appreciates this name, for he, like it, is Greek, a Greek Original in fact. When he was younger he got around quite a lot in the World, but these days he spends most of his time in his Library, except when he feels the urge to go out and hunt up new material.

And so it happens that he walks east into the heart of the city along Owegoâsoon to be renamed StateâStreet, while the sun sets behind him and all around gas lamps are lit against the coming darkness. Crossing Fulton Street a horse and buggy have become hopelessly mired, but Mr. Sunshine passes through the mud unhindered. Likewise he is unhindered by the Ithaca citizenry, who would surely form a mob if they were to notice his odd dressâthe ancient sandals on his feet are alone enough to mark him as some sort of freak. Yet while he sees and is seen by many people on his walk into town, he receives no unwanted attention, encounters no trouble.

Along Corn Street two policemen are chasing a renegade hog; formerly the family garbage disposal at a nearby house, the swine has decided to try life as a freelander. Mr. Sunshine watches it charge up the block, cops floundering in tow, and then, turning away, takes his first long look at The Hill. There are many hills surrounding the city, but only one is of concern to Mr. Sunshine. This hill, The Hill, rises along the east edge of downtown Ithaca. It is cut by two Gorges, Cascadilla and
Fall Creek, but other than these natural wonders there is little to recommend it
. . .
yet.

But there will come a man there,
Mr. Sunshine thinks, looking down the paths of the Future not quite so easily as he looks down this quagmired street,
a man of daydreams, in love with love, a man with a kite and the name of a saint. And a woman with the name of a princess, who could use what he might give her . . .

He sees other Characters besides these two: a peculiar pack of modern-day knights who will ride up this very street, a dog in search of Heaven, a faerie with a flying wing of pinewood and gossamer. But they will be a long time coming yet; the Story which has drawn him will not have its true start for over a hundred years. It is all right; it will give him time to prepare, to Meddle a bit.

Twilight. The last glow of day leaches from the sky, revealing starstudded velvet. There is no moon, which Mr. Sunshine finds depressing, but one can't have everything. By gaslight he nears the intersection of Owego with Aurora Street, where the Ithaca Hotel stands (it, along with dozens of other neighboring buildings, will burn to the ground during an all-night conflagration five years hence). Two men stand out front of the Hotel arguing, or rather, finishing an argument.

“You're a goddamned fool,” the shorter, wider man shouts, “if you think the people of Ithaca will sit still at the creation of anâan
Oberlin
within their borders!”

“Co-education is a sound plan,” replies the other man more calmly. He is tall, dressed in a black coat and top hat, a man of wealth with a grey beard as long as his adversary's face. “I doubt our fellow lthacans will complain once they see the University in operation. In time we hope to offer instruction in every study
. . .
to any person, male or female.”

“Well you may rest assured, Sir,” the short, stout fellow says with a note of finality, “that none of
my
children, male or female, will ever patronize such an institution.”

“No doubt,” the tall man agrees. “By âevery study,' I do not, of course, mean to include the study of how to act like a pompous ass, which is the only study to which your offspring are likely to be inclined.”

So much for civilized discussion. The short man puffs out his cheeks as if trying to explode and take the tall man with him; when no blast is forthcoming, he makes a gesture with his hands that is seldom seen in these parts, turns to go, tangles his feet, and falls flat out in the mud. Once again wishing he were a bomb and failing, he picks himself back up, dripping mire and horse manure from his own not inexpensive black coat, and stomps away (squelch, squelch, squelch) into the gathering gloom.
Mr. Sunshine moves closer, letting himself be noticed, though the tall man, seeing him, still registers no surprise or shock at his outfit. “Denman Halfast,” the tall man explains by way of greeting, indicating his retreating adversary. “Local landowner; if only his mind had expanded along with his property holdings he might be a pillar of the community.”

“Cornell.” The tall man tips his hat, then coughs; he is not a young man, and hasn't been for a long time. “Ezra Cornell.”

“The millionaire,” Mr. Sunshine nods, not offering his own name in return. “One of the founders of the Western and Union Telegraph. I know of you. And did I hear you say something about the opening of a University?”

“Up there.” Cornell points to The Hill, little more than a shadow-shape now; the sun is vanished entirely below the horizon and full dark is minutes away.

“Up there,” Mr. Sunshine echoes, nodding again. It makes sense. “Many people will come here in the future. Many Characters .
. .”

“
I don't believe I've seen you before,” says Cornell. “You're a traveler?”

“What brings you to Ithaca?”

“Story,” comes the answer. “I'm a Storyteller, looking for a new Tale to pick up on.”

Ezra Cornell frowns ever so slightly. “Storyteller. You write fictions?”

“Well,” Cornell clears his throat, “I do appreciate fine literatureâ”

“So do I,” says Mr. Sunshine. “I especially like dabbling with the classics: Chaucer, the Norse Sagas, the lives of the Saints, Shakespeare, Greek mythology of courseâ”

“âof course,” Cornell butts back in, “but I've always thought popular fictions to be a waste of time and learning.”

“No need to fear, then,” Mr. Sunshine assures him. “You must understand, I'm no ordinary storyteller, no hack toying with cheap fabrications. I'm a Storyteller; I Write without paper, and all my fictions, Ezra, are true.”

Cornell looks at him quizzically, not understanding, and Mr. Sunshine responds with a smile.