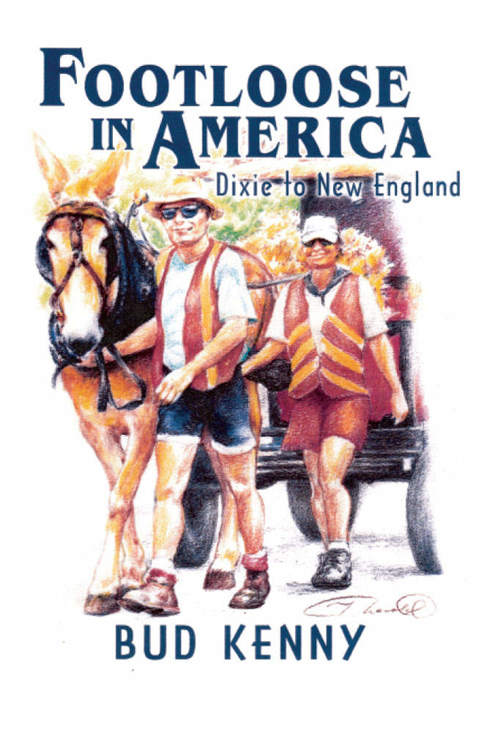 I
N
A
MERICA

I
N
A
MERICA

All of the events and persons in this story are real. However,
I did change some names.
It just seemed like the right thing to do.
-bud-

For Patricia and Della.
This would not have been the adventure that it was without them.
-bud-

“People in love don’t look at each other,
they look in the same direction.”
-dancer Ginger Rodgers-

Chapter 3    Della In The Delta

Chapter 4    The State Of America In Kentucky

Chapter 7    Autumn On The North Bank

Chapter 8    A Home For The Winter

Chapter 9    Into The Heartland

Chapter 11  Among The Plain Folk

Chapter 12  In The Land Of Old King Oil

Chapter 13  Up Through Buffalo

Chapter 15  Winter In The Snow Belt

Chapter 16  The Boys Are Back In Town

Chapter 17  Where They Called Her Patty

Chapter 18  A Life Worth Living

Chapter 21  New Hampshire And Knowing Why

Chapter 23  Is This Really The End?

His wrinkled face spit the words at me from across the road. With a cigarette in his hand, he leaned out the window of an old blue pickup idling in the west bound lane.

He wore the kind of sunglasses they give cataract patients. His voice was mean and raspy. “You passed my house a couple of days ago, and you only got this far?”

With Della-the-mule pulling our pack cart, Patricia and I were walking east toward the Mississippi River. In his beat-up Ford, he was going the other way.

“The paper said you was walking to New England.” He started stubbing out the cigarette on the outside of his door. “Hell, you’ll never get there going this slow.”

“You’re the only one who ain’t.” He tossed the butt into the road. “Everybody’s in a hurry these days. You’ve got to be if you’re goin’ to get anywhere.”

“I’ve been in a hurry before, but I didn’t like where it was taking me. So I thought I’d slow down and see where that got me.”

Suddenly, on the road behind him, we both heard the roar of an engine approaching. He glanced in his rear view mirror, grabbed the gearshift and turned his old face toward me. I thought he was going to say something, but he just shook his head and sped away.

B
EHIND ME
I
HEARD A
thud. It sounded like a tire on the pack cart had rolled over something. Suddenly, there was screaming–painful screaming. Della bolted, the cart lunged forward and the scream turned into a gut-wrenching howl punctuated by yelps. It was our dog Spot, and he was under the cart.
Did it run over him?

I jerked Della’s lead rope and yanked on the brake cord. “Whoa!”

It didn’t make any difference. All she wanted to do was run away from that screaming. Only the brake was keeping her from doing so. Behind her, the cart’s tires were skidding through roadside gravel. I jumped directly in front of Della, grabbed both sides of her bridle and growled, “Whoa, dammit! Whoa!”

She did. But all eighteen hundred pounds of her was shivering as Spot continued to cry out from under the cart. When I let go of the bridle, Della turned her long face around to see the commotion. Her huge ears were rigid toward the screaming. I dropped the rope to see if she would stand ground-tied. She did. I whirled around and ran back to the cart.

Patricia, who’d been walking several yards behind us, was running toward me yelling, “What happened? Where’s Spot?”

I said nothing, dropped onto my belly, scooted under the back of the cart and across the gravel to him. A chain attached to Spot’s collar was tangled around the back axle, and his head was pinned to it. His right rear leg was covered with blood. When I tried to get the chain off his collar, the screaming got worse. I couldn’t reach the snap.

“Let me see if I can do it,” my wife said as she crawled under the cart beside me.

I rolled out of her way, got up and ran back to Della. She was shuffling her feet and jerking in her harness like she wanted to take off. And if I hadn’t set the brake on the cart, she would have. I grabbed the lead rope and stroked her nose. “It’s okay, Big Sis.”

Patricia yelled, “Bud, see if you can get him loose from that side!”

When I slid under the cart, my body was directly in front of the back wheel. If Della were to take off, it would roll over me. But, I didn’t have time to dwell on that. My wife was frantic. “Lift him from that side! He’s going to break his neck if we don’t get him loose!”

When I put my hands under his back, Spot shrieked. Della jumped and the tires skidded. I dropped him and rolled out of the way as Patricia shouted, “I’ve got him!”

I jumped to my feet and scurried around to the back of the cart, where I found my wife cradling Spot in her arms. Both were out of harm’s way. So I ran and grabbed Della’s lead rope then tied her to a nearby sign post. When I went back to where all this happened, I found Patricia on the ground holding our white and brown spotted hound. I asked, “Is he hurt bad?”

Spot was whimpering in her embrace, as she said, “It looks like his back leg got run over. What happened?”

For the first half of that day, Patricia had walked with Spot on a leash. But all morning he pulled so hard on it that by noon her right shoulder was sore. Fifteen years ago she injured it in an elevator that broke loose and fell seventeen floors. Spot’s pulling had aggravated her torn rotator cuff. So we opted to let him ride the rest of the day in the cart.

On the floor of the cab, we had a rug for him to lay on. To keep him from jumping out, we fastened two light weight chains to his collar. One attached to each side of the cart. Somehow, a link on the left chain had come undone. When he jumped out the right side of the cab, that one got
tangled around the back axle and pulled him under the cart. That’s probably when the wheel rolled over his leg.

My wife ran her hand over his bloody right rear leg, as she said, “Even if it is, what can we do about it? It’s not like we can jump in the car and run him to the vet.”

She had a point. We were sitting alongside Arkansas Highway 5 north of the Garland and Saline County Line. The nearest veterinarian was fifteen miles back in Hot Springs. Patricia added, “Even if we could, try to find one open at this hour on a Saturday. Trust me, it ain’t happening.”

For the past ten years my wife had owned and operated a dog grooming business in Hot Springs. She knew what she was talking about. I asked, “So what do we do?”

We pulled the first aid kit out of the cart, cleaned his leg and coated the abrasions with antiseptic. Although he cried as we treated his wounds, Spot didn’t have much of a reaction when I moved the leg around.

Patricia said, “If it was broken, I don’t think you could do that.”

She decided to spend the rest of the day riding in the cart with Spot so she could keep an eye on him. I was laying our injured hound in the cab when my wife said, “Can you believe this? It’s only our second day on the road, and already we’ve run over our dog.”

The next day was June 24, 2001. It was the hottest, most humid one so far that year. Everything we did made us sweat. That morning, as I tied the laces on my hiking boots, perspiration dripped off the end of my nose down onto my fingers. When Patricia handed me the nylon tent bag to pack on top of the cart, my hands were so damp it slipped out of them and landed on the ground. While I harnessed Della and hitched her to the cart, I was constantly wiping my eyes with the back of my hands. Hands that
were wet with sweat. Eyes that were already stinging from my salty special juices.

For more than twenty-five years I had fantasized about doing this–leaving it all behind to travel this country and others on foot. Whenever I visualized this dream, it was always my wife and me walking along a country road with our mule and dog on a beautiful day. I realized some days would be hot and others cold. And there would be times we’d be walking in the rain or snow.

My Fair Lazy: One Reality Television Addict's Attempt to Discover if Not Being a Dumb Ass Is the New Black, or a Culture-Up Manifesto by Jen Lancaster
Seventh Mark (Part 1 +2) by W.J. May
Completing the Pass by Jeanette Murray
Undercover Genius by Rice, Patricia
Because They Wanted To: Stories by Mary Gaitskill
Satin Pleasures by Karen Docter
Spree by Collins, Max Allan
Stone and Earth by Cindy Spencer Pape
The Dark Design by Philip José Farmer
Morgan's Return by Greta van Der Rol