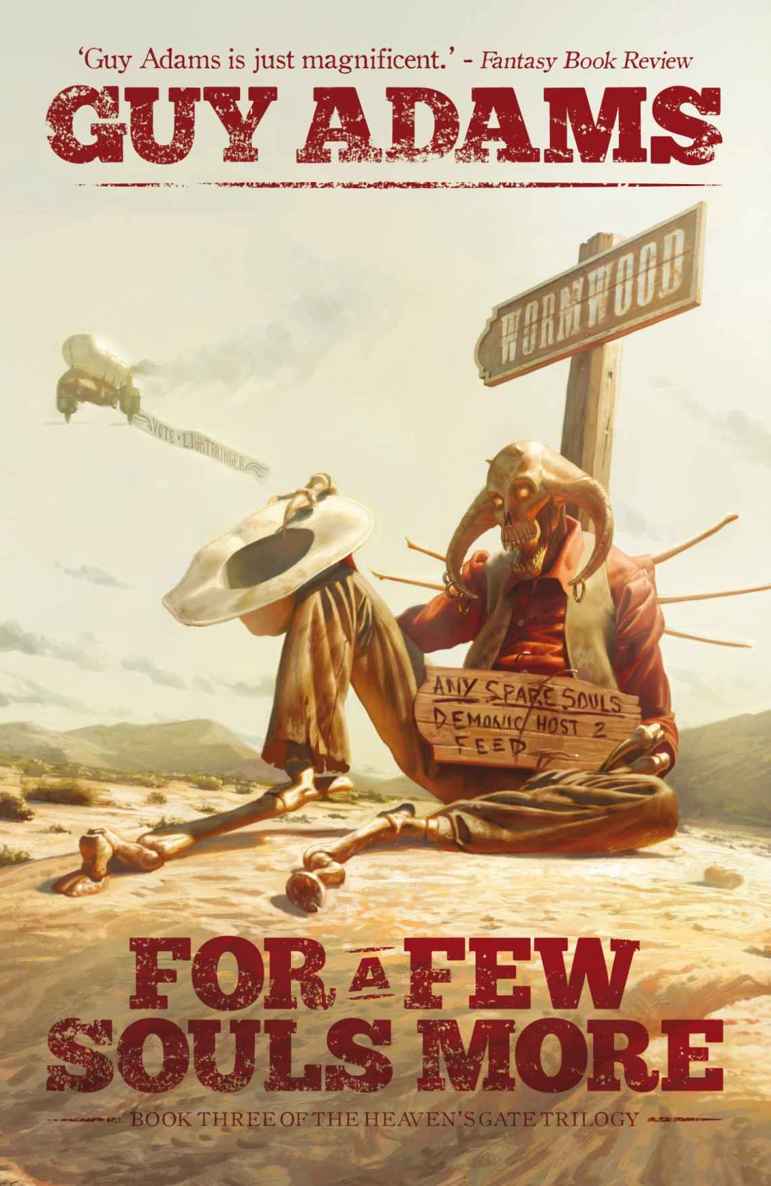 The reviewers and readers that have travelled this three-book road. The kind words from you is what kept this stupid outlaw in the saddle. I hope you’re happy with where the wagon train has settled.

MAN WHO CAME TO KILL

T
WO BULLETS CHANGED
the world. The first had already been fired, the second was still to come, resting in its box in the left hand pocket of Atherton’s coat as he rode towards the town of Wormwood.

It was the end of a rushed and uncomfortable journey and Atherton was in no mood for the atrocities that surrounded him. He’d heard the stories and read the report but words on a page don’t prepare you for the sight of a demon.

“Spare a few cents?” one asked him, brushing a plume of gelatinous, weeping fronds away from its mouth.

Atherton had once watched a table of Chinamen eat noodles with chopsticks. The passage of edible string from bowl to lip had seemed endless, as if they had been trying to consume an infinite clutch of twine. He had thought it like an ancient illustration of hellish torment and was reminded of it now. The demon coughed and the fronds whipped forward, some of them sticking to the creature’s forehead, hanging and quivering in front of its small, blue eyes like a mucus-splattered cobweb.

“Damned sickness,” the demon said, brushing the fronds free with its scaly hand. “The things you humans spread around.”

“If I give you money will you buy medicine?” Atherton asked. He had no intention of doing so but the question intrigued him.

“Heavens, no,” it replied, “waste of dollar. I’ll spend it on whisky. It won’t make me better but it’ll make me not care.”

“I’ll save my money then,” Atherton replied, moving on.

“Fuck you very much,” the demon said, falling into a coughing fit.

Atherton continued on towards Wormwood.

According to the reports, it had appeared out of nowhere. Atherton’s natural inclination would have been to dismiss such talk. He had once watched the illusionist, John Nevil Maskelyne seem to conjure a woman out of thin air but he doubted even that august performer could achieve the same with an entire town. Yet Atherton accepted his concept of reality was now in need of refreshment. While his superiors talked politics, terrified of the global ramifications of this new land in their midst, it seemed to Atherton that the real victim was science. He glanced up at a shape in the sky, it had the wings of a vulture but a human body. It swooped and curled in the air, either for the joy of it or on the hunt for a meal, Atherton couldn’t tell. Science, he thought, science may never recover from the presence of Wormwood.

The flying creature issued a cry that brought a hungry seagull to mind. Atherton kept one eye on it, wary in case it should swoop down onto him.

He couldn’t resist guiding his horse in a circuit of the town. He had been told that, while it might appear to be nothing more than a small collection of buildings and streets, once entered it was a gateway to almost infinite space. Impossibility after impossibility.

From a distance the place looked empty. That too was a lie, he was assured. His employers had sent a team of local men to investigate—Atherton had been on the other side of the country and a train could only run so fast—and they had all commented on the difference between the town’s external appearance and the sights that unfolded once you crossed its threshold. The real town lay hidden, only visible once you were inside it.

As he watched, this was proven as a small group emerged from one of the side streets and out onto the open plain. They appeared like the resolution of a mirage, a shimmering of silver light, indistinct and liquid, that solidified as they left the influence of the town. There were two men, between them a young girl riding on a horse. They appeared perfectly human but Atherton knew better than to jump to conclusions.

“Good day,” said one of the men, nodding at him and smiling so widely that his thick beard rippled, like a dog shuffling into a comfy position to sleep on his face.

Atherton nodded and smiled back. “Been exploring?” he asked.

“More than that,” the other man said, “setting up house.”

This fellow was clean-shaven and less friendly. When he looked at Atherton it was with analytical eyes. Sensible man, Atherton thought. It was the English accent, that always brought people up short.

“Really?” Atherton asked, looking at the kid. “Seems a funny place to call home to me.”

“You new here?” asked the man with the beard. Atherton nodded. “Then maybe you need to get a feel for the place before passing judgment.”

“Yeah,” the man continued, “that’s as maybe but Wormwood’s something you’ve got to experience for yourself.”

The girl smiled at Atherton and he noticed her teeth were moving, rolling up and down like the keys on a clockwork piano.

“Kid needs a dentist,” he said, encouraging his horse past them, continuing towards the town.

He entered Wormwood, passing through the invisible barrier that stood between it and the rest of the world.

The town was bloated with people. Great crowds, both human and demon, making their way along the wide, dirt streets. Everywhere he looked, Atherton saw the species intermingling. America, he thought, the melting pot of the world. He had been stationed over here only two months but he had grown to hate the country. Its chaos. Its contradiction. Its sickening enthusiasm.

A pair of children scuffled together in the dust. One looked perfectly human whereas the other had all the right body parts, just in the wrong places. The human kid laughed and threw a small ball, the demon child leapt to give chase, the legs that sprouted from his rosy cheeks paddling in the dirt as they dragged the rest of his torso behind him, arms clenching and clapping at the rear like a dual tail.

It made Atherton sick.

He tied up his horse outside a tavern, the riotous sound of cheering and laughter washing over him as he pushed open its doors and stepped inside.

It smelled like a place whisky went to die.

An obese creature navigated her way towards him on three legs. Her blouse was torn open to reveal multiple teats, all damp and pink from suckling. “Want milk?” she asked, the nipples turning towards him like the heads of flowers searching for sunlight. Atherton shoved her aside, repelled by the sensation of her bloated torso rippling against his arm.

He made his way towards the bar, teeth gritted. His skin crawled. He fantasised about drawing his gun and shooting indiscriminately into the crowd. Did demons bleed? What colour would the blood be as it splashed its wet heat onto the dirty floorboards?

A man with a separate chunk of flesh for each of his features turned away from the bar, clearing a space. His head reminded Atherton of a book, opened to reveal a handful of thick, fleshy pages. On either side, the ‘covers’ held an ear, then a wedge each for the eyes, the nose and a perpendicular mouth that waved back and forth in the centre with the shifting of the creature’s neck. Atherton didn’t manage to conceal his disgust and the creature’s lopsided mouth sneered to see the man’s revulsion.

“Problem?” the creature asked. It reached up towards its mouth with a three-fingered hand and parted the lips. They creaked like rubber and Atherton turned away from the sight of the distended, pink innards revealing themselves like a bloodless wound. The demon threw the contents of his whisky glass into the aperture and then let it slap shut.

Hide From Evil by Jami Alden
The Scot and I by Elizabeth Thornton
The Young Black Stallion by Walter Farley
Overshadow by Brea Essex
A Widow's Hope by Mary Ellis
Look at You Now by Liz Pryor
Burkheart Witch Saga Book 3 by Christine Sutton
PsyCop 4: Secrets by Jordan Castillo Price
Crimson by Jessica Coulter Smith
On the Bare by Fiona Locke