Read For Our Son: A BWWM Parenting Romance For Adults Online

For Our Son: A BWWM Parenting Romance For Adults 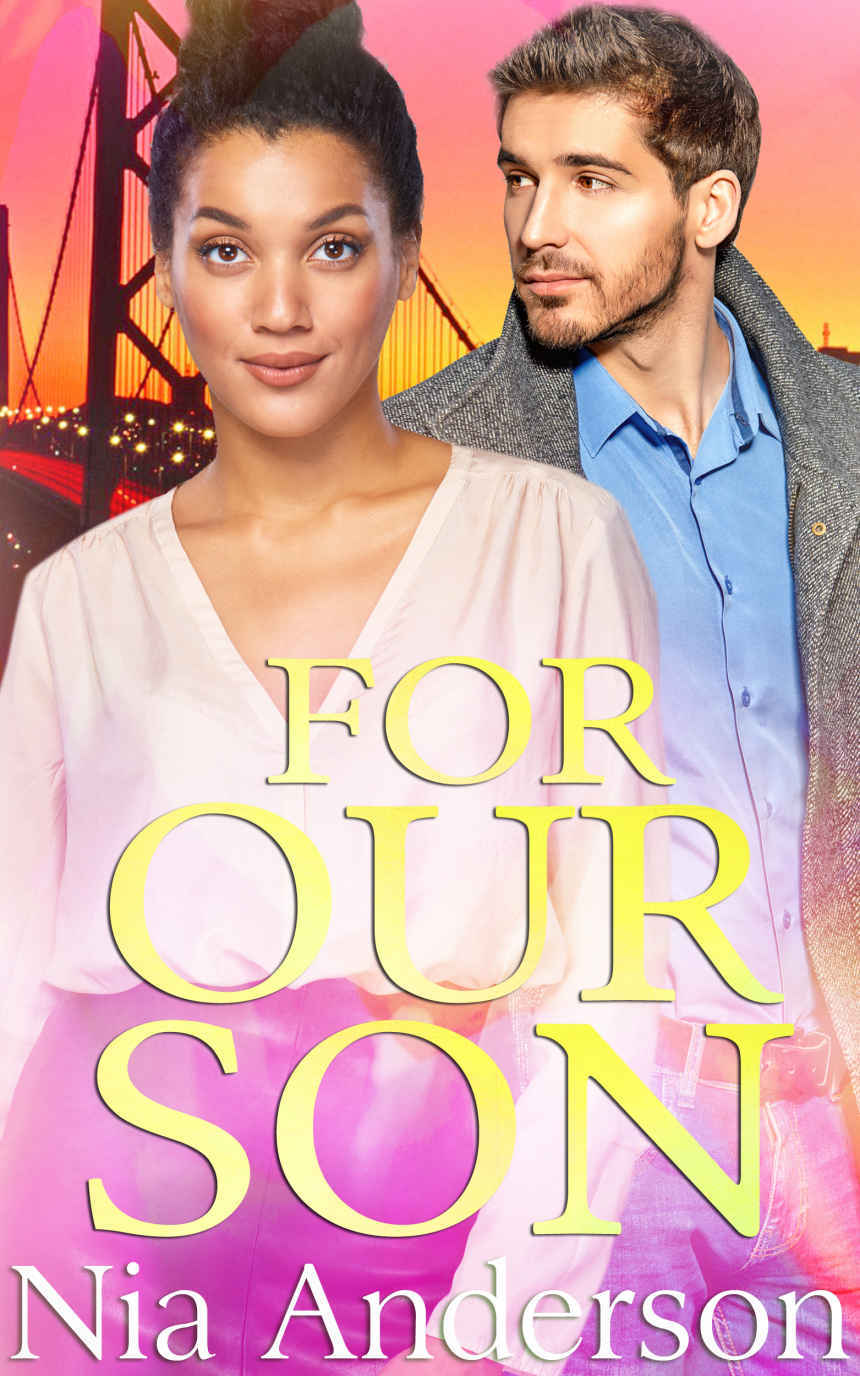 This novella is a work of fiction. Any
similarities to real people, places, or events are strictly coincidental. This
book may not be reproduced or distributed in any format without the expressed
permission of the author.

The display window for the downtown Nordstrom’s was adorned in pinks, yellows,
and flowers. It was a Mother’s Day shopping weekend and it appeared that Ryan Stewart
wasn’t the only person who’d saved his shopping until the last minute.

"Try our new scent," the salesgirl announced as she spritzed
the air.

Ryan coughed and moved out of her field of vision. His mother had very
particular tastes. He had spent years trying to buy her the perfect present,
but she always wanted the same old thing: a new necklace. Therefore, he was
taking the easy way out this year.

"Can I help you?" another salesclerk asked.

"Yeah, where are your necklaces?" Ryan asked.

"We have a wide selection of necklaces. They’re dispersed
throughout the store, but most can be found in our jewelry section. Are you
looking for something affordable, or a little higher end?"

"Higher end?" Ryan frowned. Unless he was mistaken, he was at
Nordstrom’s. Not Martin Katz.

"Correct. We have pieces that fit every budget.”

"Oh. I don’t know. I don’t know how expensive she usually goes.
Actually, now that I think about it…I don’t think I’ve ever actually seen her
wear
a necklace..."

"The salesclerk, whose name-tag read ‘Mary, laughed. "Then
maybe you shouldn’t buy her a necklace," she suggested.

"Oh no," Ryan held his hands up in protest, "I’m buying
her a necklace. Trust me. It’s the only thing she wants. It was a long lesson
to learn."

Mary laughed. "Okay, so a necklace it is. Do you need anything for
your mother, or…your wife?"

"Nah. My girlfriend doesn’t have any kids." Ryan noticed the
disappointed look on Mary’s face at the realization that he had a girlfriend
and smiled to himself. He liked the fact that this girl who knew nothing about
him was flirting with him. It happened more often since he’d cut his hair
short. It also seemed that more girls were interested in him since he’d gotten
a girlfriend. Go figure.

Ryan hadn’t been dating Sophia very long, but things seemed to be going
well. They’d met at a small production company where Ryan had interned over the
summer after high school. They became friends right away, and after awhile, a
romantic relationship seemed like the most  logical next step.

Thoughts of Sophia reminded Ryan that he was supposed to be meeting her
for lunch that afternoon. He looked down at his watch and saw that if he ended
this sales transaction quickly, he just might make it in time.

"How about this one?" Ryan grabbed a gold plated necklace off
of the closest display counter and held it up for Mary to see. “It's nice,
right?”

"That’s actually a display one…" Mary looked for a purchasable
one on a nearby rack.

"So it’s not for sale?" Ryan was impatient.

"It still has the tag on it,” Ryan observed.

Mary looked the necklace over and made sure it had no major
imperfections before ringing it up and giving it to Ryan. With little more than
a ‘thank you’, Ryan was out of the store in a hurry and on his way to his mother’s.
Before his feet hit the sidewalk, however, his cell phone started ringing. It
was Sophia.

"Derek is
always
upset. I swear, for a gay guy, he doesn’t
know how to be happy." Ryan rolled his eyes.

"Ryan!” Sophia scolded. “I can’t believe you just said that. I
thought you were more open-minded than that."

"Whatever." Ryan wasn’t in the mood to hear a speech on being
politically correct. "So you’re canceling lunch?"

"Yeah. I’m sorry. Do you think your mom will mind?"

Ryan had completely forgotten that he was actually supposed to be taking
his mother to lunch. His plan was to drop off the necklace and rush across town
to meet Sophia, but he made an abrupt decision to take his mother out when it
was actually mother’s day.

"No. She won’t mind." Ryan didn’t bother adding that his mother
had no knowledge of their plans for lunch.

Free of his afternoon engagements, Ryan didn’t bother to rush. He took
his time as he drove through the streets of his hometown. When he finally made
it to his mother’s house, she was outside on the porch.

"Oh, I’m so glad you came by. I’ve been calling you all
morning." Ryan’s mother seemed frantic.

"Why? What’s going on?" Ryan’s forehead creased with concern.

"A very official looking letter came for you this morning. I didn’t
open it, because it’s addressed to you. It came certified."

"I haven’t lived here for years, Mom. Why am I still getting mail
here?"

"I think it’s from the adoption agency."

Upon hearing that, Ryan tensed up. What could they possibly want with
him? He’d terminated his parental rights ages ago.

Ms. Stewart handed her son the envelope and stood in front of him
wringing her hands as she waited to find out what was in the letter.

"Well?" she asked when Ryan finished reading and folded it up.

"I have to go downtown. Something about a time sensitive matter,” Ryan
offered.

"I guess I’ll find out on Monday."

Ryan hadn’t spoken to Grace, the mother of his now adopted child, since they’d
graduated high school almost eight years ago. He’d tried to look her up once
last year but had been unsuccessful. To his knowledge, she had never tried to
contact him.

One thing Ryan did
know…it was a long while until Monday.

Grace’s apartment was finally showing signs of cleanliness as she
separated her clothes from her roommate’s. Thank goodness for the weekends. Tyra,
Grace’s roommate, always went home to see her boyfriend on the weekends, leaving
Grace an entire two days to recuperate from her slovenly living habits.

It had been such a busy week for Grace at work, thus, she’d neglected
her own cleaning as well. She was just now getting to do her laundry, and only
because a lack of clean bathroom towels reminded her that she hadn’t done it.

"Hey, Grace, are you going out tonight?" Grace’s second
roommate, Fletcher, asked. He was quite a partier and Grace was glad to have
made his acquaintance. He got her out on the town and mingling with her peers
at least three times a month. That was a lot for her.

"Not tonight. I’m so behind on everything. And that includes
sleep,” Grace answered back.

"You can sleep later."

Sensing the finality of her tone, Fletcher didn’t try to coax her any
more. Pushing past him, Grace made her way back into the living room and
occupied herself with a book and a can of diet soda until her load of laundry
was done. It was her hope that the caffeine would keep her awake long enough
for her to complete the rest of her chores.

Just when the details were getting juicy in her book, Grace heard
someone enter her apartment behind Fletcher and looked up to see who it was.

Grace stared into the smiling face of Marshall Campbell. It was a guy
she’d gone out with once when she was feeling lonely. It was one of the biggest
mistakes she’d made in a long time. Not only did they have nothing in common,
but Marshall’s obsession with conspiracy theories and the occult terrified Grace.

"Oh, hi, Marshall." Grace tried to quickly turn her attention
back to her book, but Marshall took a seat next to her and proceeded to talk.

"So what are you doing this weekend?" he asked.

"Just catching up,” Grace answered without looking up.

Marshall laughed…at what Grace wasn’t sure.

"Well would you maybe like some company while you do that?" he
asked.

It took Grace a moment to comprehend that Marshall was asking her out…
again
.
Turning someone down gently was a skill she’d lost back in high school, but she
tried her best.

"Actually, being social is what got me into this mess in the first
place, so I think I’d better go solo this time. Thanks anyway, though." Grace
smiled.

"There’s this badass Screamfest film festival going on down at the
Civic Center until midnight. Wanna go to that?" Marshall continued.

"I’m not free this weekend, Marshall. Sorry." Grace looked
over at the laundry room as if willing the washing machine to miraculously wash
and dry her clothes at the same time. No such luck. She was stuck with Marshall
for the duration of the spin cycle and beyond.

As Grace dragged herself away from Marshall and the living room, she
stopped outside to check the mail. An official looking manila envelope caught
her eye. It was from her parents. Grace sighed upon seeing the Thompson mailing
label affixed to the upper right hand corner. She tossed the envelope on her
desk in her bedroom. She was in no mood to deal with mama and papa Thompson.

Grace’s relationship with her parents had been strained ever since she decided
to go to a liberal arts graduate school instead of pursing law and taking the
bar. It was so bad that her father had all but stopped talking to her. Her
mother tried to play Switzerland, but even she was short and distant with her
daughter.

Grace’s parents kept telling her that she was destined to be poor and
unaccomplished due to her career choice. Money and prestige. That’s all they
cared about. What about
living?
It was something Grace felt she’d never
done until now.

Now, she was living for herself. Not anyone else.

Grace’s cell phone began to buzz and jolt as it rang. She picked it up.
Her parent’s telephone number was displayed on the screen. She frowned and
looked over at the envelop before she answered.

"Grace? Where have you been? I’ve been trying to reach you all
afternoon." Her mother sounded anxious.

The frantic sound of her mother’s voice kept Grace from reminding her
that she no longer possessed the authority to question Grace’s whereabouts.

"Is everything okay?" Grace asked.

"I was going to ask you the same question. Did you get the letter
we forwarded to you?"

Grace looked over at the envelop on her desk.
A forwarded letter?

As if hearing Grace’s thoughts, her mother continued, "You got a
letter here from the adoption agency. That’s what we sent to you."

"I haven’t gotten a chance to open it yet."

Flagship (A Captain's Crucible #1) by Isaac Hooke
MirrorWorld by Jeremy Robinson
Harry's Games by John Crace
Multiples of Six by Andy Rane
The Whore by Lilli Feisty
Justice by Rhiannon Paille
Don't Move by Margaret Mazzantini, John Cullen
The Brotherhood Conspiracy by Brennan, Terry
The Mating Project by Sam Crescent
I Minus 72 by Don Tompkins