Read For the Love of God Online 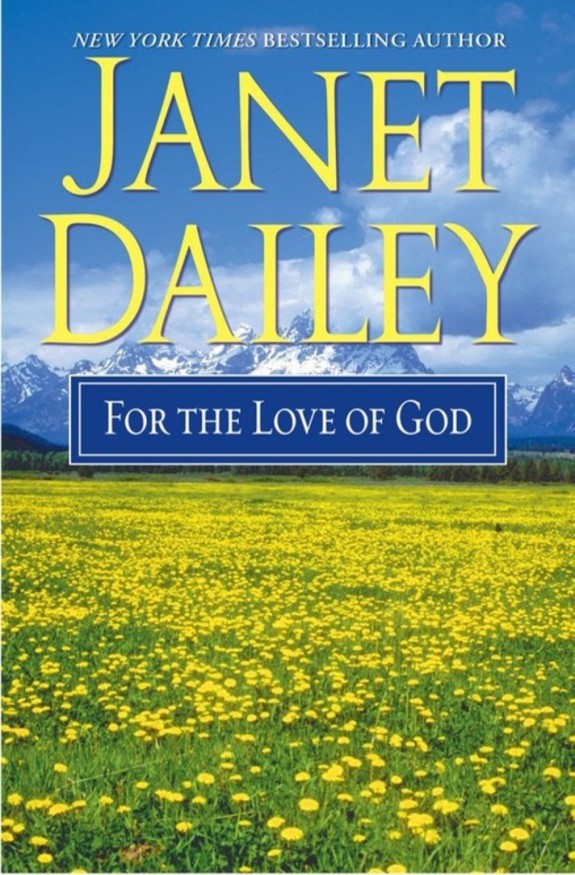 JANET DAILEY CAPTURES THE HEART OF AMERICA! LOOK FOR:

A Quiver of Longing Trembled through Her

His head bent toward her, and she knew that he was going to kiss her. The tips of his fingers rested lightly along her jaw and the curve of her throat, holding her motionless without any pressure.

The first brush of his lips was soft and teasing, but they came back to claim her mouth with warm ease.

Her lips were clinging to his by the time he finally drew back a few inches to study the result. Slowly her lashes lifted to show the dazed uncertainty in her eyes. She glanced at his face, then lowered her gaze …

The Best Way to Lose

The wind blowing through the opened car window held all the heat and humidity of a July day. It lifted the auburn-gold hair that lay thickly about Abbie Scott’s neck, creating a cooling effect. A pair of sunglasses sat on the dashboard, looking at her with their wide, oval lenses. She had removed them earlier, not wanting the view artificially tinted.

A morning shower had brought a sharpness and clarity to the landscape of the Arkansas Ozarks. There was a vividness to the many shades of green in the trees and bushes crowding close to the highway. The air was washed clean of its dust, intensifying the lushness of the Ozark Mountain greenery.

Her hazel eyes kept stealing glances away from the winding roadway to admire the ever-changing vista of rock and tree-covered hills. The flecks of green in her eyes almost seemed like a reflection of the verdant countryside.

There was a time when Abbie hadn’t appreciated
the beauty around her, when she had complained about the twisting, turning double-lane roads that snaked through the Ozark hills and the lack of entertainment and shopping facilities found in cities, and the limited job opportunities in an area where the major industry was tourism.

Out of high school, Abbie had left the serenity of the rugged hills for the excitement of Kansas City. She thought she’d found it in the beginning, but the glitter had eventually faded. A year ago, Abbie had returned to her hometown of Eureka Springs after four years away.

A lot of people, her parents included, hadn’t understood why she had given up a promising career with Trans World Airlines, headquartered in Kansas City, with its many travel and fringe benefits. Abbie’s response, if anyone asked, and few did, was a declaration of homesickness. But that was only partially true.

She guessed that her mother suspected a man was at the root of her decision to return, but Abbie had too much pride to admit the romance she thought would lead to the altar had ended up going nowhere. Initially she had come home to lick her wounds, but a year’s distance had enabled her to see it had only been the final straw and not the ultimate cause.

Now, instead of a lucrative job with a large corporation, she was her father’s legal secretary, paid only a small salary compared to her previous wages. By watching her pennies, Abbie managed fairly well with some adjustments
from her prior life-style. She “semilived” with her parents, which meant that she had taken her savings and fixed up the loft above the garage, once a carriage house, into a small efficiency apartment. It provided privacy, as well as low rent.

And there was Mabel—her car. She had traded in her speedy little Porsche sports car for a cheaper and older automobile. Mabel, as Abbie had dubbed the car, wasn’t much to look at. Her body was showing signs of rust and dented fenders. She was accidentally two-toned blue, since the hood and the passenger door didn’t match the sun-faded robin color of the rest of the car. If it was possible for vehicles to have a personality, Mabel certainly did. She was grumpy, did a lot of coughing and complaining like an old woman, but there wasn’t a sick piston or plug in her body.

As the road began an uphill climb, Abbie shifted the standard-transmission car into second gear. The motor made a small grunting sound of protest but Mabel didn’t hesitate. Abbie’s lips curved with a faint smile.

Although July marked the height of the Ozark tourist season, there was relatively little traffic on the state highway leading into Eureka Springs. Most of the tourists used the major highways, so Abbie only had local traffic to contend with. Plus, it was the middle of a Saturday afternoon, which meant most of the tourists were at the various area attractions and few were on the road.

After experiencing city rush-hour traffic, Abbie didn’t let crowded Ozark roads stop her from visiting her grandmother on the weekends. Grandmother Klein continued to live on the rocky farm she and her late husband had worked, although the acreage itself was now leased to a neighbor.

Abbie’s grandmother on her mother’s side still raised chickens, had a milk cow and a big garden, and canned more food than she could eat, totally ignoring the fact she was seventy years old and should slow down. No one ever visited Grandmother Klein without being loaded down with foodstuffs when they left, and no amount of protesting changed that.

On the floorboard in front of the passenger seat, Abbie had jars of pickles—sweet, dill, bread-and-butter, and cherry—as well as an assortment of homemade preserves and jellies. Plus there were two sacks on the seat. One contained tomatoes, cucumbers, and sweet corn from Grandmother Klein’s garden; the other was filled with ripe peaches freshly picked from the tree, their fruity smell filling the car.

The temptation was too much to resist and Abbie reached into the sack for just one more peach as the car neared the crest of the hill. The fruit was still warm from the sun, its juice spurting with the first bite Abbie took. She had to use the side of her hand to keep it from running down her chin.

When she started to sink her teeth into the fuzzy skin for another bite, she saw the red
warning light gleaming on the dashboard panel. She lowered the peach from her mouth and frowned slightly. It was rare for Mabel to overheat on these up-and-down roads.

“Don’t lose your cool now, Mabel,” she murmured to the car. “We’re nearly to the top.”

But the light stayed on even after they started the downhill run. When Abbie saw the wisps of steam rising from the hood, she knew there was trouble, and started looking for a place to pull off the road. It was another half-mile before she found a shoulder wide enough to accommodate Mabel. By then, there were more than wisps of steam coming from the hood.

Once the car was parked, Abbie made a quick glance to be sure her lane of the highway was clear of traffic before climbing out to check under Mabel’s hood. She forgot she had the peach in her hand until she needed both of them to unlatch the hood. She held it in her mouth, ignoring the juice that dripped onto her blue plaid blouse.

The tails of her blouse were tied at the midriff in an attempt to beat the summer heat. When Abbie started to lift the hood, drops of scalding hot water were sprayed over the band of bare stomach between her blouse and faded Levi’s. She jumped back, nearly dropping the peach, and just managing to save it while she wiped the hot water from her stomach with her other hand.

“How could you spit on me like that, Mabel?” she unconsciously scolded the car.

The upraised hood unleashed a billow of steam that quickly dissipated. Abbie moved cautiously closer to peer inside and find the cause of the spitting hot water. There was a hole in the radiator hose. Her shoulders sagged with dismay.

Abbie turned to look up the road, trying to remember how far it was to the nearest farmhouse. It was another four miles yet to the edge of town, she knew. She wasn’t enthused about walking even half a mile in this heat.

A semi tractor-trailer rig zoomed by, its draft sucking at her. Abbie looked hopefully at the oncoming traffic. She knew nearly everyone in the area. Maybe someone would drive by that she knew and she could get a ride into town. Not under any circumstances would she accept a lift from a stranger.

More than a dozen vehicles passed but Abbie didn’t recognize any of the drivers. A small handful slowed down when they went by her stalled car, but none stopped. And Abbie made no attempt to flag anyone down either. She took an absent bite of the peach while she debated whether to start walking until she reached the nearest house, where she could telephone her parents, or to wait a little longer.

A low-slung, dark green sports car came zipping around the curve in the road, approaching her parked car from the rear. It immediately slowed down at the sight of the upraised hood. The convertible model car had its top down, but its windshield prevented Abbie from getting
a clear view of the man behind the wheel. As it edged onto the shoulder to park behind her car, she noticed the out-of-state license plates and tensed a little. Four years of living in a city had made her slightly leery of strangers.

The driver didn’t bother to open the door. Instead, he lightly vaulted over the low side to walk toward Abbie’s car. The man was tall, easily reaching the six-foot mark. In this land of the summer tourist, there was nothing unusual about the way he was dressed—a mottled gray T-shirt and faded cutoffs with white sneakers. It exposed an awful lot of hard, sinewy flesh, tanned to a golden brown. His hair was a toasty gold color, attractively rumpled by the wind.