Read For the Sub Online 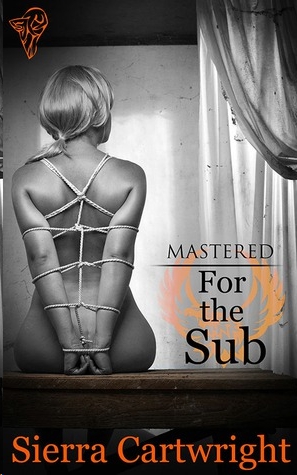 This book contains sexually explicit content which is only suitable for mature readers. This story has a
heat rating
of
Total-e-melting
and a
sexometer
of
3.

This story contains 160 pages, additionally there is also a
free excerpt
at the end of the book containing 16 pages.

Book five in the Mastered series

His heart wasn’t in it… Dom Niles Malloy has locked his favourite flogger in a drawer and has all but left the lifestyle, but then Brandy Hess shatters his solitude and shakes up his life, challenging him to fully live again.

What you see isn’t what you get…

Though he was once a respected and well-known Dom, Niles Malloy rarely attends functions at the Den, and he has no interest in ever having another permanent relationship. He satisfies his occasional desire for kink by playing with subs who have no expectations.

Professional sub Brandy Hess has known Master Niles for years, and when he invites her to play with him, she accepts. But she’s unprepared for the reaction she has to his intense brand of play. In their shared, emotionally intimate moments she sees the weariness in his features, and she has a dangerous and compelling urge to know him better.

Experience has taught her to never again settle for less than a man’s complete commitment, yet when she runs into him outside their normal setting, neither can deny the potent and pulsing attraction. He’s much, much deeper than she imagined, and she soon realises he’s everything she wants and doesn’t need in a man.

As she surrenders to him a second time, Brandy wonders if she’s lost her sense of self-preservation. She’s attracted to an enigma, a man with an edge, someone as remote as he is demanding, and her life will never be the same…

For ELF with thanks.

And for everyone who takes the time to connect with me through social media. Your emails and messages are a constant source of joy and inspiration. I appreciate you!

Startled out of his reverie by the softness of a woman’s voice, Niles looked over the rim of his empty glass. Brandy, one of the house’s submissives, stood in front of him, her legs close together, her shoulders pulled back in a sexy way that thrust her chest forward.

Had he been so lost in thought that he hadn’t heard her approach? Or were her movements so graceful and perfect that she’d managed to silently cross the Den’s patio?

Given her seductively high stilettos, he doubted the latter.

Her long blonde hair flowed over her shoulders and down her back. Tonight she wore a short, slinky black dress that covered everything, but she seemed more intriguing because of it. The material clung to her, highlighting her ample breasts, trim waist and curvy bottom. This woman—sub—appealed to every one of his masculine sensibilities.

Her legs were bare, and her black heels emphasised the feminine shape of her ankles. For a moment, he fantasised about placing her on her back, removing her shoes then stroking his fingers against her instep before applying a cane to the soles of her feet.

He shook his head to banish the image.

It had been years since he’d played with a woman in anything other than a detached way. In fact, it hadn’t happened since the tragic death of his beautiful, accomplished wife and sub, Eleanor.

But right now, he was thinking about touching Brandy in a way meant for their mutual satisfaction.

The motion swept her hair to the side, snaring his interest. The locks were long enough, he mused, to be used as part of a hot bondage scene.

“Would you prefer to be alone, Sir?”

“Actually, no.” The answer surprised him.

A month ago, he’d declined the invitation to tonight’s party. Every fall, Master Damien hosted a get-together for Doms and Dommes who had been members of the Den for at least seven years. It was a small, select group, and they gathered to play poker, sip the finest single malt on the planet, enjoy conversation and, if they chose, scene with house subs. Not many people availed themselves of the playrooms, however, as most were in relationships, and this exclusive gathering focused on socialising, which was not his strong suit.

Damien had pestered Niles to the point of annoyance.

Despite his reluctance, and tired of his own company after spending a week at home by himself, Niles had acquiesced.

But after half an hour of mindless white lies, telling his friends and acquaintances that he was well, he’d made his escape to the solitude of the patio. He’d dragged a chair close to the crackling fire pit to enjoy the sunset. Today had been a mild day, and summer was breathing her last gasps before surrendering to the inevitable shorter, colder, bleaker days.

Brandy, a natural submissive, rather than one who’d been trained for it, cast her gaze down at the ground before looking up him. “I never said thank you for what happened at the last Ladies’ Night.”

“No thanks necessary,” he assured her. “Any Dom would have done the same thing.”

Many times, there was an assumption among new Doms that subs wearing the house’s purple wristband welcomed any attention. A first-time visitor had made that error with Brandy.

Master Damien had not served alcoholic beverages at Ladies’ Night, opting for froufrou, sugar-laced umbrella drinks that the ladies seemed to like. But that hadn’t stopped the guest from drinking before he’d arrived.

Even when Brandy had used the Den’s safe word, the asshole had continued on, forcing her to her knees and shoving his dick in his mouth. Niles had noticed her distress and stepped in.

Truthfully he’d enjoyed throwing the wannabe Dom out of the front door. The physical altercation had dissipated some of the angst churning in his gut, emotion he hadn’t been able to get rid of otherwise. If Master Damien or anyone else had witnessed the uppercut Niles had delivered to the guy’s jaw, no one had mentioned it.

Seeing his bruised knuckles the next day had been satisfying, but not as rewarding as watching the current, exquisite expression of gratitude on Brandy’s face.

He rolled the empty glass between his palms, keeping his hands busy so he didn’t yield to the temptation to reach out and touch her.

Niles realised he knew little about her. He’d seen her around the Den for years. She was always unfailingly obedient, but she didn’t stand out. No wonder Damien continued to have her at his events.

“If you’d like to go to one of the private rooms, Sir, I’m available.”

His cock hardened. He met her gaze. Her blue eyes were wide open and she gave him a quick smile that slammed his solar plexus.
Fuck.
Why had he never appreciated how attractive she was? Maybe because she wasn’t the type he usually went for.

At six feet tall, his wife had looked him in the eye when she had donned the heels he liked. She’d been runway-model thin, with deep brown eyes and raven hair styled in a sleek, no-nonsense bob.

The two women couldn’t be any more different.

Suddenly, though, the thought of bending Brandy over, making her scream his name as she came, stoked every one of his dominant urges. Still, he didn’t want to scene just because she had a misplaced sense of gratitude. “You owe me nothing.”

“I think you misunderstood. It was an invitation, Sir.” She linked her hands at her back.

Interesting. Brandy was well trained, a perfect sub. And if he wasn’t mistaken, she’d tucked her hands out of sight so he couldn’t see the way she was fidgeting.

“I’m afraid I was being bold,” she said, still looking at the ground.

So she was nervous, and he understood why. Though she was often summoned to the dungeon, he was certain she initiated few, if any, of the scenes. “I respect a woman who asks for what she wants.”

As he stood, he put down his glass. Brandy didn’t glance up. He placed his forefinger beneath her chin and tipped her head back.

She smelt of cinnamon with a tangy undercurrent of arousal. The spicy scent intrigued him. He’d expected something more floral, in keeping with her femininity. For the first time since Eleanor had passed, he wanted to scene for pleasure. “I accept,” he said.

The slow, sensuous curve of her lips made something deep inside start to melt. “After you,” he said.

She scooped up his glass and started towards the main house. Her hips swayed from side to side, not in an exaggerated movement, but with natural feminine grace. He was looking forward to getting her naked.

Responding to a male instinct as old as time, he placed his fingers against the small of her back.

Gregorio, the Den’s caretaker, opened the patio doors for them.

“We’ll be availing ourselves of one of the playrooms,” Niles said.

Gregorio drew his dark eyebrows together. Obviously, he hadn’t been expecting that news.

“Let me know if you need anything,” Gregorio said. “You as well,” he said to Brandy as he accepted the glass from her.

“See that you do,” Gregorio said.

He appreciated the way Master Damien and Gregorio ensured everyone’s safety, but this time it rankled. Niles would do nothing to harm Brandy.

With a nod towards the watchful Gregorio, Niles guided her through the kitchen then down the stairs that led to Damien’s elaborate dungeon. “He’s protective,” Niles observed.

“I’m an employee and a friend,” she said.

Niles owned a production company that often filmed at the Den, and he’d appeared in a number of their videos. He knew the rooms well, all the apparatus that was available and each of the implements he could apply to her body.

He stopped at the bar and snagged two bottles of water before asking Brandy if she had any preference on which room to enter.

Clearly she expected him to make the decisions. Under normal circumstances, he would. But this evening was anything but ordinary. “This was your suggestion,” he told her. “So I’m betting you have an idea or two about what you’d like to have happen.”

Call Her Mine by Lydia Michaels
Mutiny by Artist Arthur
Trusting Fate by H. M. Waitrovich
Winter in Madrid by C. J. Sansom
Decked with Holly by Marni Bates
Driving into Darkness (DI Angus Henderson 2) by Iain Cameron
Other Paths to Glory by Anthony Price
The Revelation of Louisa May by Michaela MacColl
The Lewis Man by Peter May
Team Challenge by Janet Rising