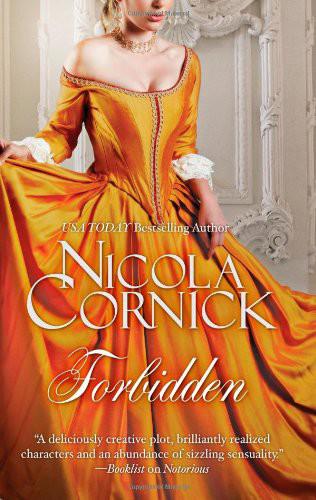 As maid to some of the most wanton ladies of the ton, Margery
Mallon lives within the boundaries of any sensible servant. Entanglements with
gentlemen are taboo. Wild adventures are for the Gothic novels she secretly
reads. Then an intriguing stranger named Mr. Ward offers her a taste of passion,
and suddenly the wicked possibilities are too tempting to resist….

Henry Atticus Richard Ward is no ordinary gentleman. He’s
Lord Wardeaux and he is determined to unite Margery with her newfound
inheritance by any means—including seduction and deception. But when the ton
condemns the scandalous servant-turned-countess and an unknown danger prepares
to strike, will Margery accept Henry’s protection in exchange for her trust?

“A rising star of the Regency arena.”
—
Publishers Weekly

“A wonderfully original, sinfully amusing and sexy Regency
historical by the always entertaining Cornick.”
—
Booklist
on
The Confessions of a
Duchess

“Fast-paced, enchanting and wildly romantic!”
—
SingleTitles.com
on
The Scandals
of an Innocent

“Witty banter, lively action and sizzling passion.”
—
Library Journal
on
The Undoing of
a Lady

Don’t miss other titles in the Scandalous Women of the Ton
series, available now!

To Bellbridge Montagu, Monty,
the most loyal animal
companion and best friend a writer could have, with love and happy memories.

Welcome to
Forbidden,
the sixth
and final book in the Scandalous Women of the Ton series!
Forbidden
is a rags-to-riches story featuring Margery Mallon,
maidservant to so many of the previous scandalous women.

When Margery discovers that she is heiress to the richest
earldom in England, she is swept from her drab existence into a world of
unimaginable luxury with beautiful clothes, glittering jewels and the most
handsome men in the country begging to marry her. But the one man she wants is
Henry, Lord Wardeaux, the man whose inheritance she has stolen and whom she can
never trust. Margery and Henry’s passionate love story unfurls against a
backdrop of elegant country houses and fashionable Ton balls. But can the
Cinderella from the backstreets of London ever find true happiness? Featuring
all the previous characters from the Scandalous Women series,
Forbidden
is a fairy tale I had such great pleasure in
writing and I hope you enjoy it, too!

In the Peerage of Great Britain, there are a dozen titles
that can be inherited in the female as well as the male line. The earldom that
Margery will inherit is one of these.

Tarot cards are used to foretell the future and the fortunes
of the characters in
Forbidden.
The Tarot has been
used for hundreds of years to predict the future.

The Wheel of Fortune: Fate turns its
wheel
London, April 1817

T
HE
MAN
SITTING
BEFORE
HIM
had a certain reputation.

Mr. Churchward knew a little of his history. Baron Henry
Wardeaux had been a soldier. The way he spoke still bore the trace of command,
clipped and direct. He had fought with Wellesley in the Peninsular War where he
had been known as The Engineer for his skill in military fortifications. He had
done other work, too, spoken of in whispers, secret work behind enemy lines. Mr.
Churchward was a lawyer, a man given to dealing in facts and figures, but he
believed the stories told of Henry Wardeaux.

“So, Mr. Churchward,” Wardeaux said, sitting back in the
high-backed armchair and crossing one elegantly booted leg over the other. “Have
you discovered proof that Miss Mallon is Lord Templemore’s granddaughter?”

No pleasantries about the weather, which had been mild and wet
of late. No enquiries into Mr. Churchward’s health, which was good but for a few
twinges of gout. Lord Wardeaux never wasted words.

Mr. Churchward shuffled his papers a little nervously. He
cleared his throat. “We have found no definite proof, as yet, my lord,” he
admitted. “It has only been two days,” he said, trying not to sound
defensive.

Two days since a man had come to Mr. Churchward with
information that the Earl of Templemore’s granddaughter, who had been missing
for twenty years, was alive and well, and working as a lady’s maid in London.
Two days of frantic activity to try to discover if the information could
possibly be correct.

It had been astonishing news, news that had revived the health
and hopes of the old earl. He had sent his godson and heir, Henry Wardeaux, to
London immediately. If the report was true, Henry Wardeaux would no longer be
the heir. Templemore was one of only a handful of titles in the country that
could descend through the female line.

“If you have not yet found proof, what have you found?”
Wardeaux asked.

Mr. Churchward gave a sharp sigh. “We have discovered a great
deal about Miss Mallon’s adoptive family, my lord. None of it is good.”

“Her elder brother owns a business buying and selling
secondhand items. It is a cover for the sale of stolen goods,” Churchward said.
“Her middle brother works in a tavern and her youngest brother…” The lawyer
shook his head sadly. “There is no criminal activity he has not dabbled in.
Highway robbery, fraud, larceny…”

“Because he is good at getting away with it,” Mr. Churchward
said.

This time, Henry Wardeaux did laugh. “And from this den of
thieves comes Lord Templemore’s granddaughter and heiress,” he said.

“Perhaps,” Mr. Churchward admitted. The circumstantial evidence
that Margery Mallon was really Lady Marguerite Saint-Pierre was very strong, but
he disliked circumstantial evidence. It was irregular, lacking firm
verification. He wanted facts, witnesses, written testimony, not the faded
miniature portrait and the garnet brooch that his informant had provided.

He fidgeted with the quill pen that lay on his desk. Never, in
his long and distinguished career serving the nobility, had he been involved in
such a case as this. When the earl’s daughter had been murdered twenty years
before and her four-year-old child stolen, no one had ever expected to see
little Marguerite again. No one, neither Bow Street nor the private
investigators the earl had hired, had been able to trace her. The earl had
mourned for years.

Wardeaux shifted slightly in his chair. “If you cannot prove
one way or the other whether Miss Mallon is Lord Templemore’s granddaughter, Mr.
Churchward, I shall have to do so myself.”

“If you gave me more time, my lord—” Churchward began, but
Wardeaux lifted one hand in so authoritative a gesture that he fell silent.

“We don’t have time,” Wardeaux said. There was an edge of steel
beneath the quiet words. “The earl is anxious to be reunited with his
granddaughter.”

Mr. Churchward understood the urgency. The earl was dying. Even
so, he hesitated. He knew Margery Mallon, and in turning over the case to Henry
Wardeaux he felt as though he was throwing her to the wolves.

Wardeaux waited. Churchward sensed his impatience. He was a
hard man, a cold man whose life had driven all gentleness out of him.

“The girl has no notion of her parentage,” he warned.
“According to my enquiries she is quite…” He groped to find the appropriate
word. “Innocent.”

Wardeaux looked at him. Mr. Churchward found it disconcerting.
The darkness in his eyes suggested he had long ago forgotten what true innocence
was.