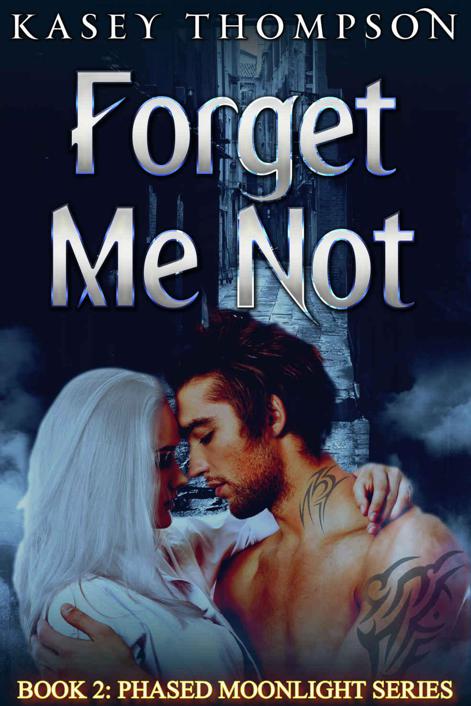 Forget Me
No
t

No part of this publication may be reproduced, stored in a retrieval system, or transmitted in any form, or by any means, electronic, mechanical, photocopying , recording, or otherwise without written permission from the author. Thank you for respect the work of this hard working author.

Every girl dreams of the perfect wedding day—the gown, the venue, the whole shindig. Me? I want nothing more than my man standing before our two packs, ready to combine us as one. Nothing else really matters to me. When you have a family who is willing to accept all your flaws and a partner who you know will never hide anything from you, what more could a girl ask for? ~
Sera Kalihan

K
oda Stephano paced the small confines of his office, feeling as if the walls were caving in at some torturous, slow, agonizing pace. It was as if time was taunting him. His wolf clawed for release as he reread the note for the trillionth time. His enemy had found him, and, in turn, his mate. Sera Kalihan had walked into his life by mere chance, and grateful could not even begin to describe how he felt about that. No matter the cost, he couldn’t bear to lose her, but now had to decide just what actions to take.

He turned and walked out of his study, down the halls of the pack mansion, in search of his beta, Jackson Jacobs. He found him resting in one of the plush leather recliners in the library, sipping the foam from a beer and reading a large book of pack records. The lamp atop the table next to the recliner highlighted Jackson’s arm, revealing his mating marks. His markings were just as big as Koda’s, indicating just how dominant his beta was. Jackson shared those distinct markings with Koda’s mate’s best friend, Trisha.

“Koda,” Jackson said, bearing his throat in submission. Jackson easily picked up on Koda’s agitated vibe, and his wolf responded with a gentle growl. “What’s up?” he asked, eager to help his alpha if he could. “Are you and Sera fighting?”

“I could only wish for something so simple. Beta, I have a question for you,” Koda said as he plopped down in the recliner across the coffee table, directly in front of Jackson.

Koda took a deep breath before meeting Jackson’s stare. “If your family had just gone through something terrible, would you tell them if you knew something else was going to happen, something bad? Would you put them through more misery?”

Jackson paused as he contemplated Koda’s words. “Well, I guess that depends.”

“I am not sure. This new threat, as you put it, may only be a fluke. I don’t know if I have true reason to worry.”

Jackson’s eyebrows quirked at him, and he narrowed his now-glowing, caramel-colored eyes. “Just spill it, brother.”

“Block your thoughts!” Koda said with a growl, referring to the mental bond he knew Jackson shared with Trisha. “This is to be a private conversation.”

Jackson nodded, signaling he had done what his alpha had asked.

Koda withdrew the note from his pocket and handed it to him with a frown on his lips.

Jackson opened it and began to read. As soon as he finished, he snarled and slammed his fist on the coffee table in front of him.

“’C’? It has to be him. There is only one stupid enough to threaten you.”

“Ceolus,” Koda growled out, nodding. Even uttering the name left a thickness in his throat, making it hard for him to swallow. “How did he find us?”

Jackson shook his head. “I don’t know. We went through hell and back to make sure we were rid of him. I thought he was dead. It’s been what? Ten years?”

Koda nodded. “Yes. I don’t understand it, but if any of it is true, Sera could be in serious danger.”

“I wouldn’t tell her. Sera doesn’t need that kind of pressure right now, especially with our weddings so close.”

“Perhaps you’re right. Perhaps hiding it from her would be for the best.”

“You know what they say.”

“What she doesn’t know won’t hurt her.”

S
ometime later, Koda was sitting on his bed with Sera lying across his chest, tracing his arm gently with her fingers.

“What are you hiding from me?” she asked gently, looking up at him calmly.

She frowned, pulling away. “Koda, there is no use trying to hi—”

“But why?” she whined. “Why must you keep secrets from me?”

“Because I…” he stuttered. “I don’t want to ruin the surprise.”

She stood up from the bed and walked away, arching a doubtful eyebrow at him.

Koda could see that she didn’t fully believe him. He stood and walked over to her. Grateful that she still allowed his touch, he wrapped his arms around her slim waist and rubbed his hand up and down her scarred back. “
Mio amore
(my love), please don’t be angry with me. This is for you,” he said, offering her only half-truths.

She turned around in his arms and looked up into his deep, emerald-green eyes. “I love you, and I will respect your wishes to hide something from me, but there is something you should remember,” she said.

“And what’s that, my dear?” he asked, noticing a bit of sadness in her eyes but glad she was willing to accept his excuse for his silence.

“Karma is a bitch…and, mate, she has my number on speed-dial!”

Sera looked around the crowded airport, clenching her shaking hands in her lap. She hadn’t planned to leave without Koda, but the way he’d been acting lately had her wolf on edge. She knew that he was hiding something serious, not just some cheesy surprise. She also knew that if he would cave in and tell her if she gave him an ultimatum, but she didn’t want to go that route. Their relationship was still new and fragile to add any tension to it.

Trisha walked up next to her and handed her a cup of black coffee.

Sera smiled and graciously accepted the caffeine with a quiet, “Thanks.”

Trisha rubbed her arm. “He’ll be okay,” she consoled, knowing what a toll it was all taking on Sera.

Sera snorted. “Have you met my mate? He’s gonna give me hell for leaving without him.”

Her best friend nodded, tucking a strand of blonde hair behind her ear. “Yeah, well, Jackson’ll be pretty pissed too. We shoulda told them we were leaving, Sera.”

Sera sighed and rubbed her eyes. “He wouldn’t have let me leave.”

“I think he would have,” Trisha argued.

Sera looked at her beta, with exasperation in her eyes. “He’s far too much of a control freak. He flipped his lid when I went to the beach alone, and when I wanted to go to town with Ressa, he made me take an escort. A flippin’ escort! Me, the Ghost Wolf!”

Trisha hid a chuckle behind her hand. “Overprotective?”

Just as Trisha was about to reply, Keenan, a dominant male in Sera’s pack, walked over to them. He was wearing the same stern expression he always did, and his harsh brown eyes lowered to the floor as he approached. “Alpha, the plane is ready.”

Sera nodded, motioning for Keenan to lead. As they entered the plane, she felt her breathing hitch. She sat in one of the leather plane chairs and watched as Trisha did the same. Even though she was scared of heights, she had gotten used to flying. Trisha, on the other hand, was not so at ease when it came to coasting through the wild blue yonder. She was shaking, and her skin had taken on a pale green hue.

Sera reached over and patted her leg. “It’s only three da—”

Before she could finish consoling her terrified friend, raw, powerful, explosive rage rushed through Sera; it was Koda, forcing his way through her mental shields. The invasion was sharp and intense, so much so that Sera cried out in agony, fell out of her seat, and clutched her abdomen.

Trisha shortly followed, and she knew that Jackson was tanning her hide.

By the brutality of his voice, Sera knew Koda’s wolf was speaking to her. He was in control, and he was angry. Pain rolled through her body in waves, making her feel as if she was being boiled.

His command pinned Sera to the floor, and she shrieked as she felt the pressure of his power. With every last drop of strength she had, she called out to Keenan, “Go!”

The engine roared to life, and she fell limp on the floor, allowing the anger of her mate to render her helpless.
“Koda, please stop. You’re…h-hurting me,”
she whimpered into his mind.

Instantly, the emotion was reined in, and she was able to breathe again. The pain dulled, but she felt warm, salty tears flowing down her cheeks. She looked around, somewhat stunned, and was thankful to find that only Trisha had seen her in such a moment of weakness.

The brokenness in Koda’s voice tore at her heart, and she felt herself wishing she could run to comfort him.
“I’m sorry. I don’t know what else to say besides that.”

“I need to do this, Koda. I have to go back and tie up loose ends.”

“And the humans? Why must they come back with you?”

Sera sighed, knowing he was referring to what she had written in her note.
“Because they’re my family, too, Koda, like it or not. They need to know I’m okay. They won’t cause any trouble. Your father is preparing the guest cabins.”

“My father knowing of your plans does not make them acceptable, Sera. I am the alpha, not him…and I am not okay with this.”

The Future Is Japanese by Unknown
The Mouse That Roared by Leonard Wibberley
Aurora by Joan Smith
Awake by Riana Lucas
The View From the Tower by Charles Lambert
Laura Marlin Mysteries 2: Kidnap in the Caribbean by St John, Lauren
Cold feet by Brenda Novak
Babylon and Other Stories by Alix Ohlin
The Accidental Virgin by Valerie Frankel
Mentor: A Memoir by Grimes, Tom