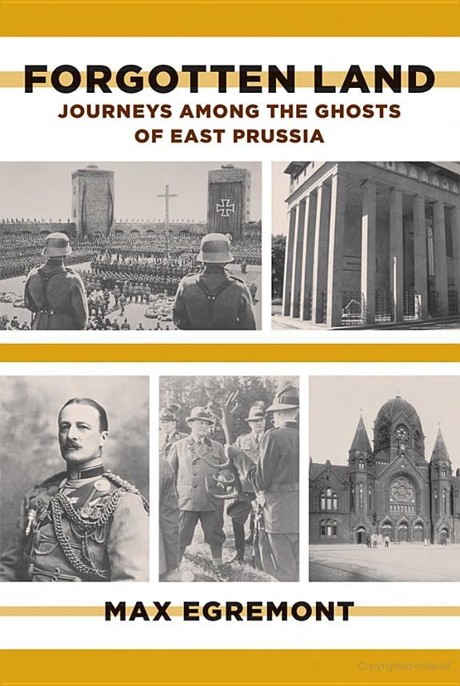 For Melissa Wyndham
Table of Contents
Title Page
Introduction
1: The Whispering Past
2: A Frontier Land
3: ‘Talent is a duty’
4: A Polished Helmet
5 : The Grieving Parents
6: Ober-Ost
7: ‘Seed corn is not for harvesting’
8: East Prussia’s Versailles
9: ‘Names that are named no more’
10: A Lost Victory
11: Fallen Oak Leaves
12: The Need for Order
13: Kantgrad
14: ‘May every discord break against this monument’
15: The Great Wilderness
16: Journey to Irkutsk
17: ‘The Terrible and Great Way’
18: The Prussian Sahara
19: ‘My dear Jews’
20: ‘Do you see in the east the brightening dawn?’
21: ‘The highest pleasure on earth’
22: Storm in January
23: The Fall
24: Hope Deferred
25: The Living Museum
Notes
Bibliography
Acknowledgements
Index
ILLUSTRATION CREDITS
Also by
Copyright Page

Introduction
Marjellchen is a restaurant in a street of monolithic apartment blocks off Berlin’s Kurfürstendamm. It’s a dark place inside, heavily cosy, almost a caricature of a certain antique Germanness. The clutter includes beer tankards and ancient marzipan boxes, armorial shields (one from the old Königsberg, now the Russian Kaliningrad), pictures of deer in the wild, of castles, harbours and twisting medieval streets, of wide lakes and forests. Glinting bottles of central European spirits line the bar, also evoking the old times: the Aquavit Samländer, East Prussian Kartoffel (potato) Schnapps, Pillkaller, Trakehner Blut. ‘Marjellchen’ means girl in a now rarely spoken dialect from hundreds of miles away, in a land now divided between Russia and Poland – the old East Prussia.
Speaking German, I ask the waiter for a menu. He smiles a little condescendingly, walks across to a desk and brings over one that has been translated into English. The fare is sturdy stuff, appropriate for long, snowy winters. It’s hard to choose between Creamed Herrings East Prussian, Smoked Ham of Deer, Fried Cockerel Legs, Grapevine Snails, Fillet of Pork Squire’s Style, Masurian Jugged Game, Grandmother’s Semolina Blancmange.
Is Marjellchen a gathering place for those with roots in the province that ceased to be German when the Red Army stormed through it in 1945? Later, as I leave, two middle-aged couples are standing outside and I ask why they chose Marjellchen. Were their families originally from what the restaurant owner’s East Prussian grandmother called her ‘cold’ Baltic homeland? The four of them laugh. One of the men says, no, they know nothing about
East Prussia, gesturing with his hand as if to push the place away: nothing at all. It’s Marjellchen’s food that they like – good sustenance to protect you from the winter wind.
East Prussia was on the edge. Perhaps this historic pressure on its people – their anxiety and sense of threat, how they faced these – was partly what drew me there from Britain’s island safety. East Prussians used to talk of going into the Reich, particularly during its last years, as if travelling to the mother country from a distant outpost. After the First World War, the province was cut off from the rest of Germany by the Polish Corridor, the thin strip stretching south from the Baltic that had been given to the new Poland in the Treaty of Versailles. Many East Prussians felt the need to stress, before and after their homeland’s extinction in 1945, that the place had been German for five centuries. Stalin had brought about the huge population change, seizing their identity. The Germans were expelled and Poles and Russians moved in.
What were these supposedly long-lasting frontiers? Over time, they had changed as the borders of Prussian districts, the frontiers of Poland and (since 1871) those of Germany shifted. After the Treaty of Versailles, East Prussia’s western frontier was along the River Vistula, east of Danzig (now Polish Gda

sk). It stretched eastwards along the Baltic shore and south to what was then the new Poland’s northern frontier, then north-east, including Königsberg, up through Tilsit (now the Russian Sovetsk), over the River Niemen to the most eastern town of pre-1945 Germany: Memel (today the Lithuanian port of Klaip

da).
Five centuries of continuous German life, it’s said – since the Teutonic Knights, a crusading order of chivalry, had set out in the thirteenth century to conquer this remote land for Christendom, converting or killing (like the crusaders in the Middle East) its pagan people. So East Prussia evolved into the German Empire’s most eastern redoubt, tramped over by invaders. Immigrants sought refuge there from persecution in the rest of Europe, from
anti-Semitic Russian tsars, from French Catholic kings or Austrian archbishops.
This makes nonsense of any claims of racial purity. In January 1945, the eleven-year-old Arno Surminski fled his village in the East Prussian district of Masuria, with most of the inhabitants and his parents. The Red Army caught up with them, they were marched back and the older people deported to the Soviet Union, leaving behind Arno, who never saw his parents again. Later, as a writer in the west, Surminski thought of his lost homeland as an extraordinary mix – a small part of Asia, invaded by Tatars, also the country of the old pagan Prussians, the Lithuanians, the Russians, the Poles, the Ukrainians, the Teutonic Knights, the Germans, the Huguenots from Catholic Europe, the Turks and the Mongol invaders, the Swedes during the Thirty Years War, the French under Napoleon.
In the sixteenth century, with the ending of the Teutonic Knights’ control of the region, Duke Albrecht, the Hohenzollern ruler of East Prussia, swore allegiance to the King of Poland, bringing the land into the Polish-Lithuanian Empire. In the seventeenth century it passed by treaty into the lands of the Hohenzollern Elector of Brandenburg, whose descendant was crowned King in Prussia in Königsberg in 1701.
Duke Albrecht called on his fellow European rulers – Henry VIII of England, the Holy Roman Emperor Charles V, King Ferdinand of Hungary and Bohemia – to support him against the Turks (the Asiatic hordes) who threatened civilization: a rallying cry of Christendom used five hundred years later by Goebbels against the invading Red Army. In twentieth-century Germany, East Prussia could seem an anachronism, still a bastion of the Junkers, the militarized aristocracy from east of the River Elbe that provided much of the officer corps of the German army. Yet Königsberg was the city of the philosopher Immanuel Kant and, in the eighteenth and early nineteenth centuries, a place of astonishing intellectual discovery. In East Prussia there was tolerance and bigotry; after 1871, in the newly united Germany, it became
increasingly fearful and reactionary – against threats real and imagined, in the form of the Poles, the Bolsheviks or economic decay on the edge of the new Reich.
In 1945, the bastion crumbled. The northern part – Königsberg and its ice-free port, an enclave about the size of Northern Ireland – was taken by Stalin for the Soviet Union; the rest joined the new communist Poland. More than most of Europe, East Prussia is strewn with symbols of a turbulent past – in its buildings, its ruins and its graves. Poland has absorbed the southern parts, with a few remaining tensions. In the north, the Russians of the Kaliningrad region find themselves cut off from the rest of Russia since the early 1990s by a Poland and a Lithuania now outside what was the Soviet bloc, places they go to increasingly often. Many Kaliningraders compare their lives not so much to those of other Russians as to those of Poles and Lithuanians in the European Union, and, although dissatisfied, have hopes of change.
For Germans, however, East Prussia is a memory – one that they can shape into myth and regret, fading perhaps but still a reminder of how they once were, in what their forebears thought of as their country’s (and civilization’s) most eastern redoubt. A place of reconciliation, of fantasy or of hope: perhaps, after its last painful years, this is now East Prussia’s destiny.
ADS
15.4Mb size Format: txt, pdf, ePub

Wicked Sweet by Merrell, Mar'ce
A Blessed Child by Linn Ullmann
Sidekick by Natalie Whipple
Diabetic Cookbook for Two by Rockridge Press
Children of the Tide by Valerie Wood
Higher Institute of Villainous Education by Mark Walden
The Sheik and the Virgin Princess by Mallery, Susan
Beyond the Call by Lee Trimble
The Circus of Adventure by Enid Blyton
Sally’s Honeymoon: Book 4 Of A Contemporary Romance Short Story Series by Temple, A.J.