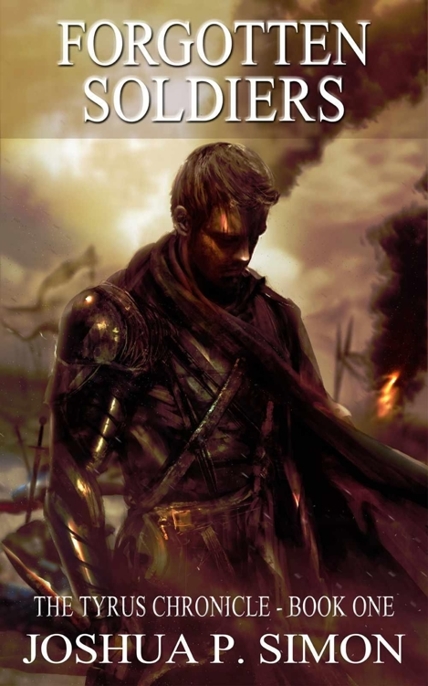 The Tyrus Chronicle - Book One

These stories are works of fiction. Names, characters, places, and incidents are either products of the author’s imagination or used fictitiously. Any resemblance to actual events, locales, or persons, living or dead, is entirely coincidental.

No part of this publication can be reproduced or transmitted in any form or by any means, electronic or mechanical, without permission in writing from Joshua P. Simon.

Visit the author at
joshuapsimon.blogspot.com
.

Not even hell could be this bad.

I heard that phrase repeated above all others in the decade I spent in the army. During the early years, those few words sent a cold shiver down a man’s back. It often did mine for what they implied.

I heard a private say it while dragging his dead buddy over to a funeral pyre after a battle. I heard it pass through a captain’s lips as he watched survivors from a burned out town beg for bread or offer their emaciated bodies up to passing soldiers in exchange for the smallest morsel of food. I heard that same captain say it again, correcting himself, when one of those survivors got their food and refused to divide it with the sickly children pleading for their share.

The captain’s whisper still echoed in my mind. “Gods Tyrus, I was wrong. Not even hell could be this bad.”

I heard soldiers and mages of all ranks in the infirmary say the phrase, usually between sobs while they stared at a missing limb. I heard physicians and healers mumble the words over and over after their shifts, drowning themselves in a bottle of whiskey, hoping they might forget the horrors of their profession for at least a little while.

Not even hell could be this bad.

In time, the saying slowly changed, taking on a new flavor and becoming something lighter, too light in my opinion.

Dealt a bad hand of cards? Not even hell could be this bad.

Got a bad bowl of stew? Not even hell could be this bad.

That same stew gave you the drizzles? Not even hell could be this bad.

In-grown toenail? Not even hell could be this bad.

I’m ashamed to admit that even I uttered those words a few times myself over the years in the context they were never intended. It was hard not to when you heard them used so often without real conviction.

Those few words nearly rolled off my tongue once more as I watched unit leaders clamor inside General Balak’s command tent. I clamped my lips down before the expression tumbled from my mouth, bitter I had subconsciously treated the phrase with the same irreverent attitude I loathed so much in others.

The back of the tent allowed me a good view of unit leaders acting like unseasoned fools. They fought to gain the position closest to the general in hopes he’d notice them. I shook my head, letting them waste their time. If they hadn’t yet figured out that Balak hated men who kissed up to him, they never would.

Only one thing got Balak’s attention and that was success. Excel or fail in your mission, he’d remember you. Therefore, the best course of action was to succeed, but with as little fanfare as possible.

Looking back on the early years of my forced enlistment, I wish I had taken that middle of the road approach. Gaining command of my own unit early on had done strange things to me. Traits I had never shown before the army became defining characteristics. The chip I wore on my shoulder grew with each success until I had to draft others to help me bear its weight.

Everyone under my command had taken their share of the load with pleasure. Being part of my unit became a point of pride because we didn’t just excel, we outclassed everyone to the point of causing resentment among other units. Admittedly, rubbing our success in their faces didn’t do much to ingratiate us to them.

If I could go back in time, I’d probably punch that version of myself in the jaw, but not before telling him to get his head out of his arrogant rear.

Over the years as I matured and others died, forgot, or just plain didn’t care anymore, I managed to smooth things out with many of those who once resented us. As a result, my unit didn’t stand out as glaringly.

Balak, though, never forgot about us or what we could do.

He expected more out of us.

The general noticed me in the shadows, bushy eyebrows meeting as he glared around the tent. He scowled, making the lines on his face deepen. “Tyrus, close that tent flap and get up here.”

My attempt to avoid his notice failed again.

I found a place around the table filled with maps and reports. Two lamps secured to posts above our heads, provided decent enough light. The smell of burning oil made my eyes water.

Many considered the eleven other unit leaders at the table the elite of the army. We answered to no one but Balak, and I guess the king. However, the king never left Hol, the capital of our great country Turine, so that technicality never came into play.

Most unit leaders thought we were special because we circumvented the normal chain of command. Not me. That just meant if Balak was in a bad mood, we received his wrath directly rather than having it filtered down to us.

The Geneshans had invaded Turine nearly a decade ago in the hopes of expanding its ever growing empire. We weren’t as easy to conquer as they thought. All of their other military efforts had ceased in order to focus on defeating us. Battles had been fought on both Turine and Geneshan soil, each side having the upper hand at some point or another.

Momentum had swung to our side once again, and the last thing we wanted was to lose it.

Balak handed out slips of parchment, detailing our orders. Each unit received a series of targets to take down behind enemy lines. Most focused on Geneshan supply caches or communication outposts. Standard military tactics to hinder our enemy.

Some unit leaders asked questions, a few pertinent, the rest an obvious attempt to suck up to the old general. I kept quiet. The orders seemed straightforward enough.

Balak answered questions calmly, carefully enunciating each and every word. After questions, he knocked on the table, punctuating the end.

A small grunt escaped my throat. I knew that behavior well enough to see he was holding something back. I didn’t bother raising the concern. It wouldn’t prompt him to share anything new.

Balak cleared his throat, and tapped the table once more. “Dismissed.”

I mixed in with the others filing out. We’d all be leaving in little over an hour, and I was anxious to get my unit ready.

“Sergeant Tyrus. Stay behind. I’d like a word with you.”

I had almost escaped.

I stepped aside. Several of the younger unit leaders looked jealous as they filed past. I had tried to set them straight before, but they still clamored for a private audience with the general. They thought of their role as a stepping-stone into a higher-paying officer’s position. I remembered thinking the same in the beginning. It didn’t take me long to realize the foolishness in that. Eight years after my appointment without a single promotion or pay increase only validated my current cynicism.

Balak walked around the table, posture perfect, hands behind his back.

“Then why didn’t you ask any questions?”

“The orders aren’t anything we haven’t done before.”

I thought it unfitting to add I also wanted to get the heck out of there.

Balak and I had a love-hate relationship. We both knew it, but neither of us admitted it openly. The general loved that my unit never failed a mission. However, I think he also hated having to rely on us so much.

I hated getting stuck with the most dangerous jobs simply because we were good at what we did.

Every day in the army was one away from my family. Each new mission reduced the likelihood I would ever make it back to them. Needless to say, I never got excited about risking my life.

The only thing I loved about General Balak was that he was easy to read and fairly predictable. After learning how to read him, our conversations were not nearly as painful as they had been.

Balak grunted. “This mission isn’t as routine as you might think. The Geneshans managed to form another alliance with the Malduks.”

I shrugged. “We’ve beaten the Malduks before.”

The Malduks are a nasty people full of determined fighters from the far north. The ever-expanding Geneshan Empire had tried using them in the early years of the war. Because the Malduks consisted of individual tribes rather than a unified nation, the Geneshans had struggled to gain more than a thousand of them in support, not nearly enough to swing the war in their favor.

Balak shook his head. “It’s different this time. I’m not sure how, but our reports indicate that the Geneshans brought up eight thousand fighters.”

My mouth dropped. That did change things. “I didn’t think the Malduks had that many men of fighting age. There must not be anyone left in the mountains but women and children.”

“The Geneshans managed to maneuver a small force around our western front. A few thousand.”

I nodded. Since he was being so generous with information I took that as a sign that asking questions just might yield me answers. “Do they know that we know?”