Read Fortunes of the Heart Online

Fortunes of the Heart 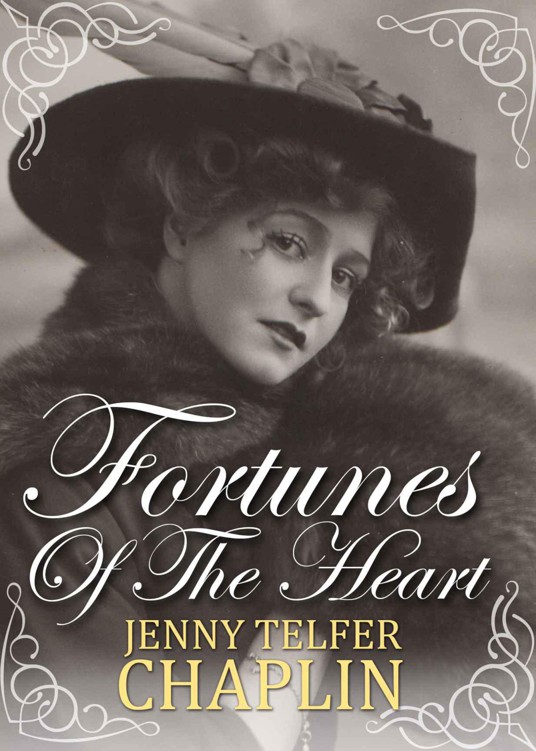 Fortunes of the Heart

Jenny Telfer Chaplin
has asserted her rights under the Copyright, Design and Patents Act, 1988, to
be identified as the author of this work.

Part One – The Early Years

Extract
from Treason by Meredith
Whitford

Chief Librarian Eddie Monaghan and his staff for their
patience, help, and expertise during my many years of research at the Rothesay
Public Library on the Scottish Island of Bute.

To world-famous novelist Evelyn Hood for her ongoing
friendship and encouragement over the years.

Part
One – The Early Years

Pearce decided he must talk to his father before Kate
‘showed’ and greatly daring, Kate had lingered in the hallway outside Pearce’s
father’s study.

She missed Pearce’s opening, but his father’s bellow was
loud and clear: “Damnation man, not again. This is too much. You’ve already run
up gambling debts you can’t pay and now you tell me you’ve got your sister’s
lady’s maid with child. Are there any more?”

“Certainly not, father. What do you take me for?”

“A bloody stupid young fool who doesn’t learn from his
mistakes. That’s what. You should have stayed in Canada out of sight.”

After a short silence, Pearce said something Kate didn’t
catch.

Kate had jumped at a touch on her arm and turned to see
Mistress Martha, her face red, staring at her.

Without knocking, Martha pushed Kate ahead of her into the
study.

“Damnation, Martha, this is not woman’s business.”

“She is my maid, father. Of course, it’s my business.”

Martha turned to Kate. “Is this true? Are you with child?”
Kate nodded, thinking she had an ally.

“You’ll get no reference from me. The very idea, sneaking
around seducing my brother. Father, pay her now. She can collect her things and
go.”

“I’ll not have another life on my conscience,” Pearce said
quietly.

His sister and father stared at him.

“It’s a bit late for that,” his father said.

“And how will you avoid that?” his sister sneered. “Marry
her?”

Pearce stood silent for a moment frowning before he nodded.
“Yes.”

“Oh, sweet Jesus, Pearce, be sensible,” his father said.
“That’s impossible. I won’t have it.”

Martha laughed. “I was joking, Pearce. There are no brothers
to worry about this time, you know. You’re quite safe.”

His face scarlet, Pearce shouted, “I was never afraid of the
brothers. It was the family that feared the scandal. I will marry Kate.”

“Don’t I get a say in this?” Kate said, and recoiled when
all three shouted: “No.”

“For God’s sake, Pearce,” his father said, “don’t let your
stubborn pride and pig-headedness back you into this stupidity.”

Pearce glared at his father. “My mind’s made up. I will
marry Kate.”

“You haven’t asked me yet,” Kate protested.

“You will marry me.” It was a statement and not a question,
but Kate nodded, then said: “Yes.”

“You’ll not get a penny piece of mine if you do. Neither of
you.”

Pearce swept Kate out of the room, told her to collect her
possessions – such as they were – while he ordered the carriage to take them to
the nearby town.

The marriage in the Registry Office in Belfast before they
caught the ferry from Lame was not quite what Kate had envisaged, but they were
married.

Kate drew her woollen shawl tightly round her shoulders. She
shivered as she watched the dark, forbidding banks of the River Clyde lined
with docks and warehouses so different from the green fields of Ireland, drift
past on their way to their destination, The Broomielaw. The passage across the
Irish Sea from Lame had been anything but smooth. Kate felt she would have been
queasy anyway, but the motion of the ship and the smell of unwashed clothes and
bodies in steerage had made her morning sickness unbearable.

She looked up at the tall, handsome man beside her. My
husband – she savoured the words – my husband.

In his fine woollen suit and Ulster cape he stood head and
shoulders above the other men thronging the deck.

Kate’s nose wrinkled at the stench from the river blending
now with the offensive odour from the steerage passengers.

“Why are we going steerage?” she had asked Pearce, her
husband of three days – her husband.

He had brushed the question aside in his cultured accent. “A
temporary financial embarrassment, my dear. That’s all. Nothing for you to
worry about. We’ll be back on our feet in no time.”

Kate coughed and Pearce glanced down at her. “You are not
going to be sick again, are you? We’re almost there.”

The gangway secured, passengers streamed off, but Pearce
waited till the rush abated before he turned to Kate. “Right, Kate, we’ll go
now. Pick up your bundles.”

Pearce picked up his two bags and strode down the gangway
with Kate stumbling after him clutching her two bundles to her chest.

“Why on earth don’t you have proper bags?” Pearce said, but
he didn’t wait for an answer. “Wait here.”

He marched over to a group of men lounging at the entrance
to the quay. They watched his approach and Kate saw them eying him up and down
obviously appraising his clothes and bearing. Short of them he stopped and
snapped his fingers. The men got to their feet and one, touching his forelock,
stepped forward.

Kate couldn’t really understand the dialect but the gesture
and the intonation were unmistakable – her husband was gentry.

Pearce said something to the man, indicating his bags.

“Come, Kate.” He walked smartly off the dock.

The man picked up Pearce’s bags, grinned at Kate, and Kate,
with a sigh, heaved her bundles up again and trekked after them. They crossed
several streets redolent with ammonia and recent droppings from the many
horses. Finally, they stopped on a street with iron rails in the middle. The
man put the bags down. Pearce handed him a coin. The man touched his forelock
and left them.

Kate wasn’t anxious to put her bundles down on the dirty
street. She balanced them on Pearce’s bags and waited.

“There will be a tram along shortly, Kate,” Pearce said.
“Until I get established again we have to watch our pennies.”

“Yes, a tram. A public conveyance that travels on those iron
rails drawn by two horses. God, do you know nothing?”

Kate made no reply, waiting in silence as she often had in
the past as a lady’s maid when the mistress was out of sorts.

Eventually a tram arrived and Kate clambered aboard with her
bundles, following Pearce. After what seemed a long journey, Pearce got to his
feet.

On the street as the tram pulled away, Kate looked round and
was not impressed, but Pearce turned to her.

“There, across the Glasgow Green. My aunt has her town house
there. It’s a little early for her to be up and about, but my cousin Calum may
be in town. Come, Kate.”

The houses across the Green were grand, Kate thought, even
grander than Laggan House in Ireland. Could she ever be the lady of such a
house?

Pearce walked boldly up to the front door of one of these
mansions and pounded the door soundly with the brass knocker.

The pert young housemaid who answered, bobbed a quick
courtesy to Pearce: “Oh, Mr Kinnon. The mistress isn’t about yet. Was she
expecting you?”

“Oh, certainly, sir. Please come in. I’ll have a fire set in
the morning room.”

She glanced at Kate as she followed on Pearce’s heels into
the morning room, but made no comment.

Almost at once a young girl, the tweenie, Kate thought,
bustled in and, completely ignored by Pearce, laid and lit the fire.

As Kate watched the girl at work she could see herself four
years ago ...

A recent orphan, lucky to have been taken in by Laggan House
she was told, Kate, the tweenie, did all the work that was beneath the dignity
of even the lowest housemaid.

Fires had to be cleaned, laid and set, and scuttles
replenished before the gentry stirred; water heated and jugs set out ready for
the housemaids to carry upstairs; the gentry safely ensconced in the breakfast
room, chamber pots to be removed, emptied, and cleaned; breakfast dishes to
wash; vegetables to prepare; laundry to be sorted for the laundress. At
everyone’s beck and call but never to be seen or heard by the upstairs gentry
and certainly never to be acknowledged by them if accidentally encountered.

Kate sighed. Had she only been the tweenie for a year? It
had seemed an eternity of first up in the morning and last to bed at night with
never a moment’s rest in between.

The mistress had been outraged that the tweenie would dare
touch a book in the library then reluctantly intrigued that a tweenie could
actually read or even want to read. When she heard Kate speak, she was even
more surprised. The local accent for sure, but more refined and educated than
most locals and certainly well beyond what the mistress expected of one of the
lower house servants. The refined accent that had caused so much grief for Kate
from the other servants as a tweenie was her salvation. The lordly butler
himself saw her trained through upstairs maid to parlour-maid where she was
actually seen and occasionally even acknowledged by the gentry.