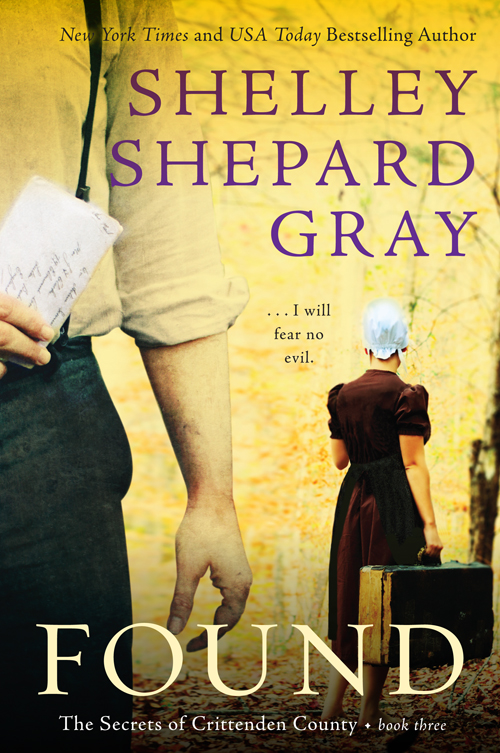 The Secrets of Crittenden County

In loving memory of my mother, Barbara Galloway

Those who look to him for help will be radiant with joy; no shadow of shame will darken their faces.

It is better to look ahead and prepare than to look back with regret.

An Excerpt from
Daybreak

J
acob Schrock knew how to keep a secret. It was the way he had been raised.

His parents ran Schrock's Variety, which was in a lot of ways the center of their community.

Since he was his parents' only child, he'd always known he would take over the business. Even when he was small, sitting by his parents' side at the front counter, he felt a part of things. He also learned that selling merchandise to most of their friends and neighbors meant being privy to a lot of information they'd just as soon keep private.

“It's not our place to comment on purchases, Jacob,” his father had told him all his life. “We offer things for them to buy, not gossip about.”

By the time he was six or seven, he had taken that advice to heart. He became adept at going about his business with only half an ear to the private conversations floating around him.

Now, though, he wished he hadn't gotten so good at hiding his emotions.

“Are you sure you don't want to come over tomorrow night?” Lydia Plank asked. “My
mamm
's going to make popcorn and hot chocolate.”

“And probably another hundred things,” Frannie Eicher said. “Your mother is a wonderful-
gut
cook.”

As Jacob sat, listening to his friends chatter, he felt the iron grip with which he'd held himself tight slowly lessen. He'd missed this. He missed this .Â .Â . normality.

He and a group of his friendsâLydia, Walker Anderson, Beth Byler, and Frannieâsat on the store's porch, some in rockers, some sitting on the porch railing, drinking hot apple cider, eating day-old donuts, and basically doing what people his age did when they could: gossiping about life.

This slice of normal was just what he needed.

He craved it after what had happened during his last argument with Perry.

Still talking food, Lydia grinned. “My mother has a reason for making so many treats for me and my friends. She knows if everyone's there, she'll be able to know what we're doing.”

“We are all over eighteen,” Beth said. Looking around, she added, “Most of us are over twenty. Your
mamm
shouldn't care what we do anymore.”

“My
mamm
is interested, but she'll stay out of the way, I promise,” Lydia said. “It will be fun.”

“Sounds exciting,” Walker Anderson said sarcastically, though not in a mean way. Just because he was English didn't mean he was stuck up like that. But he didn't hang out with them much.

Jacob considered accepting Lydia's invitation, but only for a minute. If he went, the conversation inevitably would turn to talk of Perry, of his recent exploits, his new friends, and of how Jacob's father had fired him.

Jacob definitely didn't want to go down that rabbit hole. “I don't think I can make it, but thanks for asking,” he said.

Ever since his father had fired Perry Borntrager for stealing money out of the cashbox, Jacob had been feeling more and more out of sorts. Perry had been angry and hurt that Jacob had never warned him that he was going to be let go.

And though his
daed
had been right, and Jacob had been mad at Perry about the thefts, it had been uncomfortable. After all, he and Perry had been friends all their lives.

To make matters worse, everyone in the county seemed to know what had happened. And Jacob, used to keeping others' secrets, had been having a difficult time dealing with how everyone knew one of his.

Now, a few weeks later, things hadn't gotten much easier. Perry lurked around the store with new
Englischers
. Sometimes even wearing fancy sunglasses, of all things, even when it was dark outside.

The two of them, once close friends, had become distant. There was a lot of anger pulsing between them. Misplaced on Perry's partâhe never was one to take responsibility for his actions.

And as Jacob watched his father struggle with firing a boy he'd practically help raise, Jacob's resentment grew. He was so angry that Perry had taken advantage of his family, of their friendship.

Lydia shrugged, bringing Jacob back to the present.

“If I change my mind, I'll let you know,” he replied. He breathed deep, desperate to push away his dark thoughts. Desperate to concentrate on the friends he still had.

But then one glance over Lydia's shoulder proved that goal was going to be impossible. “I can't believe he had the nerve to come around here,” he muttered.

Of course, his barely suppressed anger brought everyone else to their feet and turning around. Perry was walking toward the store with his sister, Deborah, at his side.

As if any of them would want to talk to the Borntragers.

Lydia closed her eyes and sighed at the sight of her ex-boyfriend.

“You don't have to talk to him, Lydia,” Jacob blurted. He knew breaking up with Perry had broken her heart. “We should go inside and ignore them both.” In two seconds, all of them could be inside and pretend the Borntragers weren't a stone's throw away.

“You want to ignore Deborah?” Frannie asked, her tone horrified. “Jacob, we can't do that. It wouldn't be right. Deborah's never done anything wrong.”

Still more concerned with Lydia, who had tears in her eyes and, selfishly, himself, he said, “I don't want to talk to them.”

But Beth, being Beth, couldn't seem to let it go. “That don't make sense, Jacob. You can't blame Deborah for her brother's actions.”

Sure he could. He'd always taken responsibility for his family and their actions. He expected the same of others. Plus, he'd watched enough people in the store to know that most family members were aware of what other people in their homes did even if they pretended to turn a blind eye.

There was no doubt in his mind that Deborah had known that Perry was stealing from the store. For that matter, she'd probably known all along and had been protecting Perry.

“Don't make a big deal out of nothing, Jacob,” Walker said. “It's still a free country. You can't expect Perry to never walk on your store's sidewalk.”

But just because he knew what the right thing to do was, it didn't mean he had to do it. So instead of relaxing, he rose and stood near the door to the store. Watching and glaring. Waiting for them to walk by. In just a few minutes, they'd be gone. Then they could relax and pretend that they'd never seen Perry and Deborah.

But Frannie ruined everything. She rushed down the steps. “Hi, Deborah. Hey, uh .Â .Â . Perry.”

The siblings stopped and looked at her warily.

Jacob held his breath, hating that he had no control over the situation.

He felt completely ineffectual as Frannie barreled on. “Deborah, you want to join us?”

Both siblings looked startled by the invitation. “Well, I don't know,” Deborah said, looking at Perry.

Jacob gritted his teeth. He ached to tell Frannie to take back the invitation. Or to just leave with Perry and Deborah.

After a split second, Perry turned his head. Met Jacob's gaze. Jacob stared right back, daring Perry to approach him.

After another pause she nodded. “Okay, then,
danke
.”

Frannie hooked her arm around Deborah's elbow and guided her onto the porch. Almost immediately, Beth walked over and hugged the girl.

All the while, Perry stood off to the side. Watching. To Jacob's surprise, Walker brushed passed him, walked down the steps, and spoke to Perry for a minute or two. Then, with an annoyed shake of his head, Walker rejoined the others on the porch. More cider was poured, more snacks consumed. Their conversation was inane and forced, not a one of them glancing Perry's way.

Jacob knew they were trying to pretend everything was just fine, but Jacob thought their actions were stupid. Perry was standing right there. On his property. He'd stolen money from his parents, he'd sold drugs to other kids in their community.

He was bad news, he was trouble and he deserved nothing. Not even to be ignored.

How could his friends look past that?

When another minute passed and Perry still stood on the sidewalk, Jacob walked down the steps. “What are you still doing here? You know you're not wanted, don't you?”

“I know. You've made sure of that, Jacob.” Laughing softly, Perry added, “I don't think I would be welcome to even buy a stick of butter in your store.”

A look of pain flashed through Perry's eyes, surprising Jacob. And, for an instant, making him feel guilty.

Though he sensed his friends behind him were listeningâand maybe didn't even completely approve of the way he was actingâJacob didn't give up. “You need to go. I don't want you here.”

Perry walked closer. Now only a few feet separated them.

Perry was at least thirty pounds heavier than Jacob, and had a good two inches on him, too. A prickly sense of fear inched up Jacob's spine.

With a hard glare, Perry said, “So is it now against the law to stand here?”

“I don't know if it's against the law or not. It don't matter, though. My father doesn't want to see you ever again,” he retorted. Even though his father had never said that. “I sure don't.”

An expression flew across Perry's face. Perhaps it was disdain? Maybe more like disappointment?

After another second, Jacob added, “If Deborah wants to stay without you, I'll make sure she gets home safely.”

Jacob waited for Perry to argue. To refuse to budge. But instead, he just shrugged and walked away, his shoulders drooping slightly.

Almost as if he had been the one with a reason to be hurt.

Again, Jacob felt guilty. Maybe he shouldn't have been so mean? Maybe there could've been a better way to remind Perry that he'd been the one to ruin their friendship?

His mind on that, he turned around and walked back up the steps. But when he looked at Deborah, sitting calmly there on his family's front porch .Â .Â . just like her family had done nothing wrong .Â .Â . his anger and frustration got the best of him again.

“Listen, I'm going to start locking up. If y'all want to hang out together, you're going to need to do it someplace else.”

Walker stood up to him. “Jacob, I know you've got a grudge against Perry, but you need to settle down. I don't understand why you're acting so crazy.”

Walker didn't understand. None of them did. And, maybe he was acting a little crazy.

Actually, he probably was. As he grabbed a plate of donuts and strode into the dark store, he fought to control his temper.

Because one thing was sure. If he didn't find a way to control his temper very soon .Â .Â . he would do something he would regret.

I Hate Everyone...Starting With Me by Joan Rivers
Sweet Alibi by Adriane Leigh
Waiting for Dusk by Nancy Pennick
Abiding Ink (Inked in the Steel City #4) by Ranae Rose
CursedLaird by Tara Nina
Devil Water by Anya Seton
Just This Once by Rosalind James
PEG BOY by Berube, R. G.
Hannah Coulter by Wendell Berry
Blood Waters 1 : The Boy From The Sea by Eve Hathaway