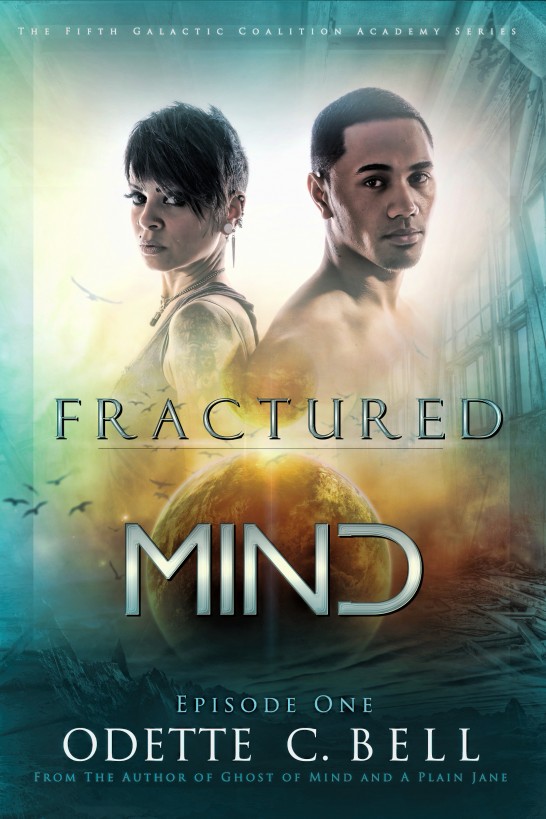 All characters
in this publication are fictitious, any resemblance to real
persons, living or dead, is purely coincidental.

She ran through the snow, her badly bleeding
leg dragging through a drift.

Her breath was stuck half-way up her throat,
every pressured exhalation sending a new wave of pain and nausea
washing through her broken body.

Above her the twin suns of the planet slowly
slipped behind the horizon. The purple and gold dusk shimmering in
the star-studded sky quickly gave way to a dark night.

She pushed up a rise, foot catching on a
rock hidden under the thick white blanket of snow. She shunted
forward and had to shove her hands out to break her fall. Her face
slammed against the snow, and she sucked in a breath of powder.
Choking and spluttering, a few droplets of bright red blood
splattering over the drift, she shoved to her feet and powered
on.

Every few seconds, she checked behind her.
Aching neck muscles sending spinning shafts of pain spiraling into
her head, she ignored her agony and scanned the now dark
horizon.

Dusk did not last on this planet.

Oh god, she couldn't discern it against the
never-ending mountains of white.

By now she was so cold she couldn't feel her
legs anymore, only the pain snaking up from the bad break in her
left femur.

How she could still walk, let alone run, she
didn't know.

She couldn't stop, though.

She snapped her head around, every breath
like fire burning in her chest. By now a diffuse tingling sensation
had pushed down her chest and sunk deep into her stomach.

Clutching a hand over her middle, the ripped
fabric of her snow jacket trailing over her wrist, she indulged in
closing her eyes.

As she shifted up a rise and paused, she
picked up its even footfall.

Not hurried, not frantic.

Even. Steady. Always coming towards her.

Fear pumped through her blood, ricocheting
around her mind like a mag bullet.

She shook her head desperately, several
strands of bloody, sweaty, icy hair sticking to her flushed cheeks
and neck.

“Come on,” she begged herself with another
choked wheeze.

She snapped her head forward and stared down
the drift.

It was steep, but she had no choice. She
threw herself down it, her boots scampering through the fine snow.
It was a battle to keep her balance. Her arms flailed at her sides
as her boots sunk further into the drift with every treacherous
step.

More and more blood oozed from the injury
to her left leg. It splattered over the snow, sinking a few
millimeters down before it was robbed of its natural warmth and
frozen – like everything else on this hell hole of a
planet.

Just as she heard its methodical footfall
ascend the rise behind her, she stumbled. Again her foot snagged on
something. This time, she couldn't regain her balance.

She fell to the side, her right arm plunging
through the drift up to her elbow.

Though she madly tried to clutch onto
something – anything – to slow her rapid descent, she couldn't.

She started to roll, her body tumbling down
the hill with all the grace and speed of a boulder free-falling
down a cliff.

Just as her heart threatened to slam out of
her chest and plunge into the frozen snow, she reached the bottom
of the rise.

For a second, she did nothing. She lay
there, face pressed up against a sheet of ice, one wide eye
pressing further open as she realized two things.

She was still alive.

And it was still after her.

She could hear the creaking of its joints.
The pneumatic hiss of its breath.

“Oh god,” she cried, tears streaking down
her cheeks as she screwed her eyes tightly shut.

Though her whole body felt like it was
little more than a broken pane of glass, she grunted and somehow
found the strength to push up. Her elbows shook as they tried to
position her weight.

But she did it.

She staggered to her feet, more blood
splattering from her wound and flicking over the white-blue snow
and ice.

Clutching a hand on her stomach and
groaning, she twisted her head all the way around and stared with
wide eyes at the top of the rise.

The night sky was so clear she could see the
colored swathe of gas clouds studded with constellations
beyond.

That brilliant light was enough to outline
her pursuer.

Large, white metal body glinting, it
inclined its head towards her.

Violent fear exploded in her gut, sending a
spike of adrenaline striking her body like a flame thrown onto a
bed of dry wood.

She found the last of her strength and
powered to her feet.

She twisted and sprinted forward.

She ignored every stabbing pain, every wave
of nausea.

She locked her gaze on the horizon until she
could see it pulling up in the distance.

A shadow against the reflective snow and
ice.

She would reach it. Then she'd find a
weapon.

And then, Sarah Sinclair would kill the
hunter.

She rocketed awake as if someone had
attached a cruiser to her mind and pulled her out of sleep with all
the speed of light.

It took her too long to realize she was in
bed. In her quarters. In the Academy grounds on Earth.

Her hands were shaking, her body convulsing
as sweat coated her brow and trailed down her back.

Her pillow and covers were a tangled mess on
the ground.

At some point she'd knocked most of the
paraphernalia off her desk. Her lamp was broken, and her WD had
popped its case.

“... It was... it was a dream.” She clutched
a hand to her chest and let her sweaty fingers anchor against her
rumpled pj top.

She couldn't calm her breathing. It raked
through her throat, just like it had in her dream.

She started to shake her head. She even
closed her eyes.

As soon as she did, the vestiges of her
nightmare climbed back into her consciousness. She saw vivid
flashes of the snow below her, of her bright-red blood slicking
down her body.

Instinctively she grabbed a hand to her left
leg.

But as she pushed her searching fingers into
the muscle, she couldn't find a serious injury.

Just to convince herself, she ducked her
head down, rolled up her trousers, and stared at her flesh.

No hole from a blaster.

She clutched her face, her sweaty shaking
fingers dragging and digging over her skin. Her hair was a tangle
over her face and shoulders, so knotted it felt like a helmet.

A second later, an alarm blared from her
wall unit on the far side of the room.

It was so sudden and unexpected she
screamed.

“You will be late for class unless you leave
in the next five minutes,” the programmed computer voice informed
her in a toneless chirp.

“Today, you will have engineering in the
morning, followed by combat training in the afternoon,” the
computer informed her, erroneously thinking she'd asked a
question.

... She couldn't push away her dream and
snap back to reality.

It seemed locked in her body. She could feel
the desperation still pumping in her heart, the fear locking her
limbs, the blood slicking down her leg.

With a reverberating sigh, she clenched a
shaking hand on her bed and pushed to her feet.

Instantly she had to shove a hand out and
lock it on the wall to steady herself.

She hunched her shoulders, rounded her back,
dropped her head, closed her eyes, and tried to wake up.

The computer beeped again, startling her so
badly she jolted, collected her mess of blankets and pillows, and
fell over.

Her left knee bashed into the floor,
knocking against the lamp.

The sharp metal base easily cut through the
thin fabric of her pj bottoms and sliced through the flesh above
her knee.

She stared at the injury in shock,
mesmerized by the blood blossoming over her light blue
trousers.

Before she could stare at it for the next
several minutes, body still locked with the memory of her dream,
her intercom beeped.

“You getting ready or what? You can't
afford to be late anymore,” her roommate said over the
intercom.

Sarah didn't answer. Couldn't. Instead she
shook her head and tried, but failed, to wake up.

When Sarah didn't answer for a second time,
her door beeped and opened.

In strode her roommate and best friend,
Nora. She took one look at Sarah's disheveled room then locked her
gaze on Sarah's injury.

Rather than lurch down and check Sarah's
cut, Nora pressed her hands around her middle and shook her head.
“Another nightmare?”

Nora sighed. “You should get that cut
checked out before class. It looks pretty deep.” Nora disappeared
out into the main room beyond Sarah's bedroom. A few seconds later
Nora came back with a med kit. She threw it at Sarah.

Sarah tried to catch it, but she was too
slow, and the kit bounced off her chest and fell against her
bleeding leg.

Nora sighed heavily. “Come on, Sarah, snap
out of it.”

“Sorry,” Sarah said in a small voice as she
hesitantly plucked up the kit, unlocked it, and began rifling
through the contents. She tried extremely hard to hide the shake in
her hands as she clasped hold of a vial of spray-on-skin.

Nora saw it, and took it as a reason to
shake her head once more. “You didn't take your meds last night,
did you? In fact, you haven't been taking them all week. Believe it
or not, I can hear when you're thrashing in your sleep. Even these
double reinforced doors aren't enough to dampen that cacophony.”
Nora reached out and rapped her knuckles against the wall. “Just do
us a favor – do what the doctors keep telling you to do. Take your
medication. It will suppress your dreams.”

Nora turned and walked out the door.

Just before the doors closed behind her, she
appeared to change her mind.

She strode back in, leaned down, plucked the
spray-on-skin from Sarah, and helped her apply it.

When she was done, Nora pushed to her feet,
and offered Sarah a hand. “Sorry to be so hard on you, kid,
but—”

“But?” Sarah looked up at her.

Nora was strong and agile, and it wasn't a
trial to pull Sarah to her feet.

“Okay, now get to the med bay and I'll cover
for you in class. But whatever you do, be back in time for combat
training. You can't afford to put Lieutenant Karax offside any
more. Not considering what you said to him last time.” Nora sighed
heavily.