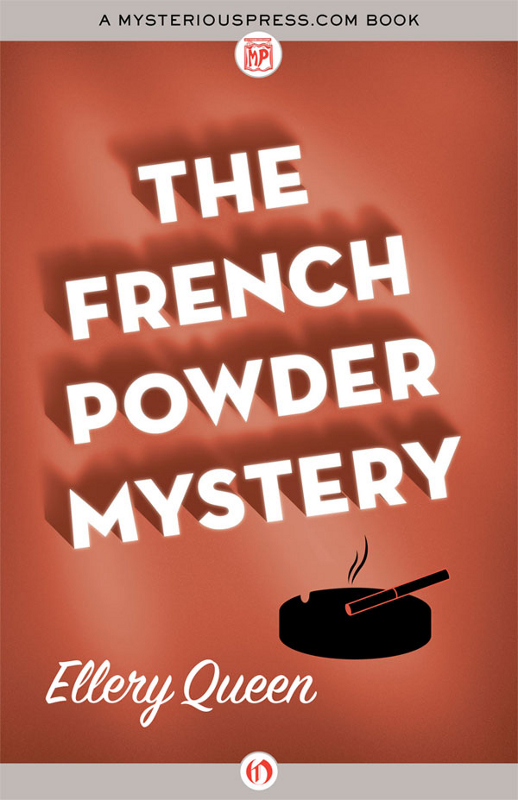 Some Persons of Importance

1. “The Queens Were in the Parlor”

2. “The Kings Were in the Counting-House”

3. “Humpty-Dumpty Had a Great Fall”

13. At the Apartment: The Bedroom

14. At the Apartment: The Lavatory

15. At the Apartment: The Cardroom

16. At the Apartment: Again the Bedroom

17. At the Apartment: The Library

26. The Trail to Bernice

E
DITOR’S NOTE: A FOREWORD
appeared in Mr. Queen’s last detective novel written by a gentleman designating himself as J. J. McC. The publishers did not then, nor do they now, know the identity of this friend of the two Queens. In deference to the author’s wish, however, Mr. McC. has been kind enough to pen once more a prefatory note to his friend’s new novel, and this note appears below.

I have followed the fortunes of the Queens, father and son, with more than casual interest for many years. Longer perhaps than any other of their legion friends. Which places me, or so Ellery avers, in the unfortunate position of Chorus, that quaint herald of the olden drama who craves the auditor’s sympathetic ear and receives at best his willful impatience.

It is with pleasure nevertheless that I once more enact my rôle of prologue-master in a modern tale of murder and detection. This pleasure derives from two causes: the warm reception accorded Mr. Queen’s first novel, for the publication of which I was more or less responsible, under his
nom de plume;
and the long and sometimes arduous friendship I have enjoyed with the Queens.

I say “arduous” because the task of a mere mortal in attempting to keep step with the busy life of a New York detective Inspector and the intellectual activity of a bookworm and logician can adequately be described only by that word. Richard Queen, whom I knew intimately long before he retired, a veteran of thirty-two years’ service in the New York police department, was a dynamic little gray man, a bundle of energy and industry. He knew his crime, he knew his criminals, and he knew his law. He brought to these not uncommon attributes, however, a daring of method that put him far above the average detective Inspector. A firm advocate of the more inspirational methods of his son, he nevertheless was the practical policeman to his fingertips. Under his long régime the Detective Bureau, except for those stormy times when his official superiors took it upon themselves by overhauling the department to satisfy a theory or a press opinion, garnered a record of solved capital crimes which to this day is unique in the police history of New York City.

Ellery Queen, as may be imagined, deplored the more unimaginative aspects of his father’s profession. He was the pure logician, with a generous dash of dreamer and artist thrown in—a lethal combination to those felons who were so unfortunate as to be dissected by the keen instruments of his mind, always under those questing pince-nez eyeglasses. His “life work” before his father’s retirement was hardly visible to the eye, unless his casual custom of writing a detective story when the spirit moved him may be termed a life work. He occupied himself chiefly in a student’s pursuit of culture and knowledge, and since he had an independent income from a maternal uncle which removed him from the class of social parasite, he lived what he characteristically termed the “ideal intellectual life.” It was natural for him to evince intense interest in crime, due to his environment, which from childhood had been saturated with tales of murder and law-breaking; but the artistic element in his nature made him useless for routine police investigation.

I recall vividly a conversation between father and son one day many years ago which brought out their wholly opposed viewpoints on the subject of crime-detection. I relate the conversation here because it will crystallize the difference between the two men so clearly—a point quite essential to complete understanding of the Queens.

The Inspector was expounding on his profession for my benefit, while Ellery lounged in his chair between us.

“Ordinary crime-detection,” said the old man, “is almost wholly a mechanical matter. Most crimes are committed by ‘criminals’—that is to say, by individuals habituated by environment and repetitious conduct to the pursuit of law-breaking. Such persons in ninety-nine out of a hundred cases have police records.

“The detective in these ninety-nine hypothetical cases has much to go on. Bertillon measurements—fingerprint records, intimate photographs, a complete dossier. Moreover, he has a little file of the criminal’s idiosyncrasies. We have not developed this phase of detective science so well as the London, Vienna and Berlin police, but we have at least laid a foundation. …

“A burglar who habitually makes use of a certain method of prying open doors and windows, or blowing safes, for example; a hold-up man who always wears a crude, homemade mask; a gunman who smokes and drops a certain brand of cigarette, purely from habit; a gangster with an inordinate fondness for women; a second-story man who always works alone, or one who invariably employs a ‘look-out’ … these idiosyncrasies of method are sometimes as definite clues to the identity of a criminal as his fingerprints.

“Your psychological policeman, by the way,” grinned Ellery, “doesn’t scorn the aid of informers, either, McC. Something like the little tick-bird that sits on the rhino’s back and warns of approaching danger. …”

“I was coming to that,” retorted his father equably. “As I said in the beginning, we have plenty to go on in the case of the hardened criminal. But most of all, despite my son’s jeering attitude, we have come to depend upon the underworld’s ‘squealers,’ ‘stool-pigeons’—they’re called less polite names, too—for the solution of routine crimes. It is an open secret that without the stool-pigeon a huge percentage of felonies would remain unsolved. They are as essential to the big city’s police as a knowledge of the proper sourcebook is to the lawyer. It stands to reason—the underworld by its amazing grapevine inevitably knows who has pulled a big ‘job.’ Our problem is to find a ‘stoolie’ who will part with the tip for a fair consideration. It isn’t always easy even then, by the way. …”

“Child’s play,” said Ellery in a provocative tone. And he grinned.

“I firmly believe,” went on the old Inspector imperturbably, “that every police department in the world would collapse in six months if the institution of underworld informing were to come to an end.”

Ellery lazily took up the cudgels. “Most of what you say, Sire, is only too true. Which is why ninety per cent of your investigations hold not a vestige of glamour for me. But the last ten per cent!

“Where the police detective woefully falls down, J. J.,” he said smiling, turning to me, “is in the case of the crime whose perpetrator is
not
an habitual criminal, who has therefore left
no
handy fingerprints which will correspond with another set in your files, about whose idiosyncrasies
nothing
is known for the ludicrously simple reason that he has never been a criminal before. Such a person, generally speaking, is not of the underworld, and you can therefore pump your stool-pigeon to your heart’s delight without eliciting the slightest morsel of useful information.

“You have nothing to go on, I am happy to say,” he continued, twirling his pince-nez, “except the crime itself, and such clues and pertinences as that crime reveals upon observation and investigation. Obviously—and I say this with proper respect for my father’s ancient profession—obviously to nab the criminal in such a case is the more difficult job by many headaches. Which explains two things—the hideously high percentage of unsolved crimes in this country, and my own absorbing avocation.”

The French Powder Mystery
is one of the older cases from the Queens’ files—an actual case, as I have said, and one in which Ellery exhibited scintillating proofs of his unique talents. He kept notes of this case during the French investigation—one of his few practical habits. Subsequently, with the unmasking of the murderer, he wrote a book around the real-life plot, developing and embroidering the facts to fit a literary pattern.

I induced him to polish up the manuscript and have it published as the second novel under his pen-name—and this at a time when I was under his sacred roof in the Queens’ Italian villa. For it will be recalled that Ellery, having renounced his old profession utterly, now that he is married and domesticated, has hidden his old cases in the depths of a filing-cabinet and nothing less than the detonation of a presumptuous friend’s exhortations has been able to make him consent to a revivification of the mellowed manuscripts.

It should be borne in mind, in all fairness to Inspector Queen, that the old sleuth’s comparatively small rôle in the French case was due to the enormous press of official business during that hectic season, and in no small degree to the heckling he was subjected to by the newly appointed civilian, Scott Welles, to the post of Commissioner of Police.

In closing, it might be pleasant to point out that the Queens are at this writing still in their tiny mountain-home in Italy; that Ellery’s son has learned to toddle and say with innocent gravity, “gramps”; that Djuna is in perfect health and has recently undergone the stress of a cosmic love-affair with a little witch of a country girl; that the Inspector is still writing monographs for German magazines and making occasional tours of inspection through the Continental police departments; that Mrs. Ellery Queen has happily recovered from her recent illness; and finally that Ellery himself, after his visit last fall to New York, has returned to that “gem-encrusted” Roman scenery with gratitude in his heart and, he says (but I doubt it), no regrets for the distractions of the West Side.