Read Fresh Off the Boat Online

Fresh Off the Boat 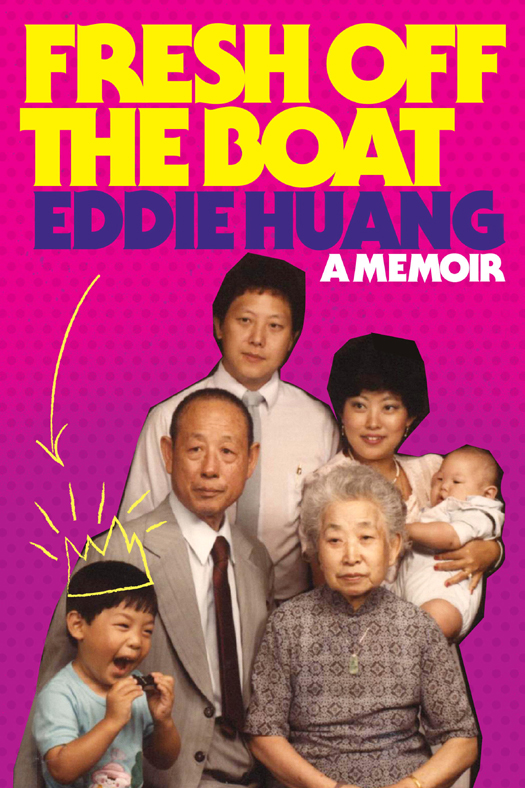 Fresh Off the Boat
is a memoir, based on the author’s recollection.
Some names and identifying details have been changed.

Published in the United States by Spiegel & Grau, an imprint of The Random House Publishing Group, a division of Random House, Inc., New York.

“CAN’T GET PAID AND THE EARTH THIS BIG?
YOU WORTHLESS KID.”

“YEAH YEAH, I DESIGN THESE THINGS AND
YOU KNOW I’M IN THE HOOD LIKE CHINESE WINGS.”

“
T
he soup dumplings are off today!” Grandpa said.

“Should we tell the waiter? We should send these back.”

My mom always wanted to send food back. Everything on the side, some things hot, some things cold, no MSG, less oil, more chilis, oh, and some vinegar please. Black vinegar with green chilis if you have it, if not, red vinegar with ginger, and if you don’t have that, then just white vinegar by itself and a can of Coke, not diet because diet causes cancer.

Microwaves cause cancer, too, so she buys a Foreman grill and wears a SARS mask because “oil fumes can ruin lungs,” says the woman who smokes Capri cigarettes and drives an SUV wearing a visor. That’s my mom.

I couldn’t eat with my mom; she drove me crazy. But she never bothered my grandfather. He was always above the trees. Like 3 Stacks said, “What’s cooler than cool? Ice cold.” That was Grandpa: a six-foot-tall, long faced, droopy-eyed Chinaman who subsisted on a cocktail of KFC, boiled peanuts, and cigarettes. Thinking back on it, my grandfather created the ultimate
recipe for pancreatic cancer. At the time we had that lunch, he’d been battling it for a while, but we tried not to talk about it. That day, we just ate soup dumplings.

“It’s the meat, did they not put enough ginger?
Mei you xiang wei dao
.”

“Eh, there’s ginger, it’s just heavy-handed. Who cares, just eat them! The rest of the food is on the way.”

Xiang wei
is the character a good dish has when it’s robust, flavorful, and balanced but still maintains a certain light quality. That flavor comes, lingers on your tongue, stays long enough to make you crave it, but just when you think you have it figured out, it’s gone. Timing is everything. Soup dumplings, sitcoms, one-night stands—good ones leave you wanting more.

The perfect soup dumpling has eighteen folds. Taipei’s Din Tai Fung restaurant figured this out in the mid-eighties. While Americans had Pyrex visions, Taiwan was focused on soup dumplings. My grandparents on my father’s side lived right on Yong Kang Jie, where Din Tai Fung was founded. To this day, it is the single most famous restaurant in Taipei, the crown jewel of the pound-for-pound greatest eating island in the world. Din Tai Fung started off as an oil retailer, but business took a dive in the early eighties and they did what any Taiwanese-Chinese person does when they need to get buckets. You break out the family recipe and go hammer. Din Tai Fung was like the Genco Olive Oil of Taipei. Undefeated.

The dough is where Din Tai Fung stays the hood champ. It’s just strong enough to hold the soup once the gelatin melts, but if you pick it up by the knob and look closely at the skin, it’s almost translucent. They create a light, airy texture for the skin that no one else has been able to duplicate. I remember going back to Din Tai Fung when I was twenty-seven and saying to myself, They’re off! It’s just not as satisfying as I remember it to be! But two hours later, walking around Taipei, all I could think about was their fucking soup dumplings. Across the street from Din Tai Fung was another restaurant that served soup dumplings and made a business of catching the spillover when people didn’t want to wait an hour for a
table. They were really close to the real deal. Like the first year Reebok had AI and you thought that maybe, just maybe, the Questions with the honeycomb would outsell Jordans. A false alarm.

Grandpa Huang put on for Yong Kang Jie and never cheated on the original. On the other hand, Grandpa Chiao, my mother’s father, had money on his mind and really didn’t have time for things like soup dumplings. He was the type of guy who would go across the street without thinking twice. He would be fully aware Din Tai Fung was better, but he was a businessman. He had things to do and never lost sight of them. Everything was calculated with my grandfather. On his desk, there was always this gold-plated abacus. Whenever something needed to be calculated, the other employees would use calculators, but Grandpa beat them to the punch every time. With his fingers on the abacus, he looked as slick as a three-card monte hustler. I loved hearing the sound:
tat, tat, tat, rap, tat, tat, tat
. After tapping the beads, he’d always reset them all with one downward stroke,
whap
, and out came the answer. He’d much rather save an hour, eat some perfectly fine soup dumplings, and go on his way.

Mom had other plans. She was my grandpa’s youngest and loudest child. Mom claims she was his favorite, and I can’t say I don’t believe her. Grandpa loved her because she was entertaining and full of energy. As a kid, she took the Taiwanese national academic exam and got into all the best schools in Taipei. After she came to America as a seventeen-year-old, she managed to graduate as the salutatorian of her high school, even though she barely spoke English. On top of that, she’s still the best cook in the family. My cousins love talking about things they don’t know about and everyone claims their parents are the best, but even the aunts admit my mom goes hard in the paint.

That day, my uncle Joe from my dad’s side was with us at Yi Ping Xiao Guan. I think he actually discovered the spot, because it was in Maryland, where he lived. Earlier that day, Grandpa had asked me where I wanted to go for my sixth birthday. He figured I’d say Chuck E. Cheese or McDonald’s, but Momma didn’t raise no fool. Chuck E. Cheese was for mouth breathers and kids with Velcro shoes. “I want to go where they have the best soup dumplings!”

I really liked Uncle Joe. He built three of the major bridges in D.C. and wore these big, thick black-rimmed glasses. I was into glasses, especially goggles, because Kareem wore them and he had the ill sky hook.

After we ate, I was kinda pissed with the shitty soup dumplings. It was my birthday! Yi Ping Xiao Guan, you can’t come harder than this for the kid? Chuck E. Cheese can serve shitty food ’cause you get to smash moles and play Skee-Ball after lunch. But all you have are soup dumplings! How could you fuck this up? Yi Ping Xiao Guan was like Adam Morrison: your job is to slap Kobe’s ass when the Lakers call time out. If you can’t do that, shoot yourself. As I sat there, pissed off, I saw a waiter pouring off-brand soy sauce into the Wanjashan Soy Sauce bottles. Corner cutting, bootleg, off-brand-soy-pouring Chinamen!

If someone was talking to Grandpa, you couldn’t interrupt, but apples don’t fall far from the tree. My mom was the youngest and never followed rules in the family. She enforced them on everyone else, but she never followed them herself.

That was the signal. Black people use the government name when shit hits the fan, and my family would bust out the Chinese. It hurt my ears to hear the Chinese name. Not only did it seem louder and extra crunchy, but it usually meant you were about to get smacked the fuck up. Luckily, Uncle Joe was a nice guy who actually thought it was possible that a child might have something important to say.

“Uncle Joe, I know why the soup dumplings are bad.”

“Look over there: the waiter is putting the cheap soy sauce in the bottles. They must be using it in the dumplings, too.”

Rei Hua was my mother’s Chinese name, so Uncle Joe got her attention when he used it.