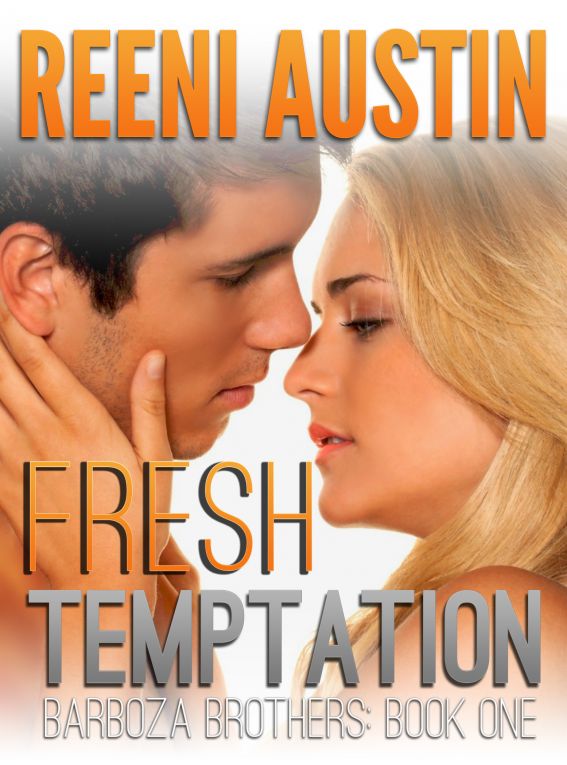 This is a
work of fiction. Names, characters, places, brands, media, and
incidents are either the product of the author's imagination or are
used fictitiously. The author acknowledges the trademarked status
and trademark owners of various products referenced in this work of
fiction, which have been used without permission. The
publication/use of these trademarks is not authorized, associated
with, or sponsored by the trademark owners.

This ebook is licensed for your
personal enjoyment only. This eBook may not be re-sold or given
away to other people. If you would like to share this book with
another person, please purchase an additional copy for each
recipient. If you’re reading this book and did not purchase it, or
it was not purchased for your use only, then please return to
Smashwords.com and purchase your own copy. Thank you for respecting
the hard work of this author.

Edited by Laurie Laliberte of the
Kindle
All-Stars
.

Other Books by Reeni
Austin

Victor forced a grin.
“Sure.” He handed his Italian suede coat to the coat check
attendant.

Be a good
sport
, Victor told himself. He hated
pretentious black tie dinners like these. This annual fundraiser
was one of a handful of events he always attended in person instead
of sending a colleague or simply issuing a large donation from his
office. Tonight’s ten-grand-per-plate meal was hosted by the Whitt
Foundation, a respected non-profit humanitarian
organization.

And since Victor’s
ex-fiancee was Alexis Whitt, he would have rather been anywhere
else.

Their engagement had ended
two months earlier—a year before their scheduled wedding date—when
Victor caught Alexis in a compromising position with her personal
trainer, Esteban. Such a cliche.

He blamed himself for a
while. Maybe he spent too much time working and didn’t lavish
enough attention. He focused on maintaining the wealth he’d amassed
at a young age as a successful investment banker. At thirty-one,
Victor Barboza was one of the youngest billionaires in America.
Quite a feat for a kid born on the wrong side of Guadalajara.
Tonight he was here to support a worthy cause he believed in: one
of the Whitt Foundation’s efforts was building orphanages and
schools in third world countries.

He had never told anyone
the real cause for the break-up. Perhaps he should have, but he
didn’t. He had too much respect for Alexis’s parents to subject the
family to the frivolous gossip of Manhattan’s upper east
side.

Besides, petty snickering
and sympathy weren’t a part of his lifestyle.

Victor preferred to move
on. Live and learn. No more spoiled little trust fund princesses
for him.

He adjusted his tie and
scanned the main ballroom for the handful of people he actually
wanted to see in this crowd. In seconds he was approached by one
business acquaintance, then another, most of them asking Victor’s
advice. Had he heard of some new hedge fund? What was the weakest
growth stock to avoid this month?

It was only a matter of
minutes, though, before one conversation took an awkward
turn.

Tim Lundquist casually
asked, “So the wedding’s in April, correct?”

Bree Lundquist, in her
green sequined gown, gave Tim a sharp elbow to the arm and cleared
her throat. “The food smells divine, don’t you think? I hear they
hired a famous chef.” She cackled and patted Victor’s arm. “I hope
we eat soon. I starved all week so I could look good in this dress
but I may have to indulge tonight. So tell me, how does a man like
you work so much but still find time to stay in such good
shape?”

Victor chuckled. He was
grateful for her swift change of subject. A good portion of this
crowd was probably as oblivious to the latest upper east side
gossip as Tim. He could tell by some random shy glances that there
were surely rumors spreading, but he didn’t much care. When this
semi-uncomfortable event was over, it was back to seeing most of
these people two or three times per year. That was something he
certainly didn’t miss about Alexis. She loved to find reasons for
him to don a tux and mingle with “friends” of her
family.

Victor chatted with the
Lundquists for several more minutes when he felt a hand against his
back.

“Barboza!” Douglas Whitt
appeared at his side, jolly and boisterous as usual. “How’s life in
the penthouse?”

“Good.” Victor smiled. The
“penthouse” was an inside joke. Both he and Douglas Whitt came from
meager beginnings before working their way to the top of the
business world. And even though Victor would never be Douglas’s
son-in-law, he still considered Douglas a valued mentor and hoped
to maintain a friendship.

Victor could’ve kicked
himself for thinking any of Douglas’s hard work and determination
could have rubbed off on Alexis. Occasionally he thought about the
day he met his former flame. She hooked him with, “My Daddy’s the
son of a poor Kentucky coal miner.” Her intentions were so obvious
now. Marry a rich, handsome bachelor who’d make Daddy proud, while
elevating her social status. If there was anything else she cared
about, Victor sure didn’t know what it was.

Douglas handed Victor a
glass. “Bourbon. Thought you could use it.”

“It’s that obvious?”
Victor took the drink and immediately brought it to his
lips.

The robust gray-haired man
shrugged and inched closer, his voice quiet. “Listen, if it weren’t
for my wife I’d never attend another one of these God-awful
shindigs. We have an agreement. She gets to dress up and throw a
fancy party for all her friends, and I get drunk enough to pretend
I wanna be here.”

“It’s true,” Douglas said.
“We could raise more money if we didn’t have to use the best
caterers in town or rent this ballroom.” He sighed. “Oh well. C’est
la vie. When are we having that lunch we always talk
about?”

“Don’t worry, son. I’ll
not try to sway you to reconsider.” Douglas gave him a knowing
smirk.

Victor was stunned that
the old man brought it up so casually. He knew from a few quick
email exchanges that Douglas was disappointed about the broken
engagement. He could also tell Douglas had no idea Alexis had
cheated. The two men had become fast friends, and Douglas welcomed
humble, hard-working Victor into the family as his own son, hoping
he would be a good influence on his daughter. And perhaps,
subconsciously, that was why Victor had avoided Douglas’s friendly
invitations for lunch or drinks after work. He would take no
chances on being persuaded to give the woman a second
chance.

But there was a murky
place deep inside Victor’s heart that still longed for Alexis.
Aside from her pampered rich-girl tendencies, she was actually a
smart, lovely woman six years his junior and fresh out of law
school. And she was undeniably hot. Long auburn hair. Sparkling
blue eyes. Legs for miles. She would have no trouble landing
another eligible billionaire in no time. Landing one who would so
easily win Douglas’s approval again…that would be
tricky.

Victor took another sip of
his bourbon and looked Douglas in the eye. “Soon, then. This week,
maybe next.”

“Wonderful.” Douglas
smiled and slapped Victor’s shoulder. “Now if you’ll excuse me,
there are some stuffy socialites I need to see.”

A few minutes later, as
Victor chatted absently with people he’d never met before, the
lights dimmed for an instant. A voice rang out over the speakers.
“Ladies and gentlemen, please take your seats. Dinner will be
served in five minutes. Your table assignment can be found on your
ticket.”

Victor pulled his ticket
from his pocket to see he was assigned to table number eleven. He
briefly glanced around the room for his ex-fiancee, then breathed a
sigh of relief. He hadn’t seen her all night. With any luck, she
was keeping her distance and he could go the entire night
pretending she didn’t exist.

There were ten chairs at
table eleven. Victor sat in one of the four that was vacant. An
elderly couple quickly filled two of them. The guests at the table
commenced with small talk. The chair to Victor’s left was still
empty when the wait staff began distributing the first
course.

And then, seemingly from
out of nowhere, the empty chair moved.

Unconcerned, Victor turned
to greet the new guest. He closed his eyes for a moment and
smothered his groan before it could leave his throat.

Alexis, of course. Auburn
hair clipped atop her head, hanging down in deliberate ringlets.
Long black dress, cut low at the chest, with a slit from her heels
to her thigh. In other words, she was gorgeous.

But she was still the
coddled heiress who cheated on him.

“Hello, all.” Alexis’s
tone was perky as she addressed her table mates. “I hope we’re all
having a lovely evening so far.”

A few people returned her
greeting. Victor immediately decided to be as quiet as possible. He
saw the awkward glances from a few others at the table who
obviously knew of the break-up and probably wondered if they were
now back together. When the appetizer was placed in front of him
seconds later, he said, “Bourbon, please,” to the
server.

Alexis was silent for a
moment as the others at the table talked amongst themselves. Then
she cleared her throat. “So you won’t talk to me? Or look at
me?”

“I’m here to support a
good cause. That’s all.”

“You could at least be
civil.”

She edged closer and
lowered her voice. “Come on. There’ll be a scene if you ignore me.
You know people are watching us.”

Looking straight ahead, he
answered through gritted teeth. “Then perhaps you shouldn’t have
sat down next to me. Or had us both assigned to the same
table.”

“Well…I thought maybe you
wanted to talk to me. Why else would you be here
tonight?”

“I already told you. To
support a good cause.”

Her silence conveyed her
disappointment loud and clear. But Victor went on, striking up a
conversation with the couple sitting next to him.

After numerous attempts to
get his attention, she interrupted him mid-sentence with a loud
whisper in his ear. “Please talk to me.”