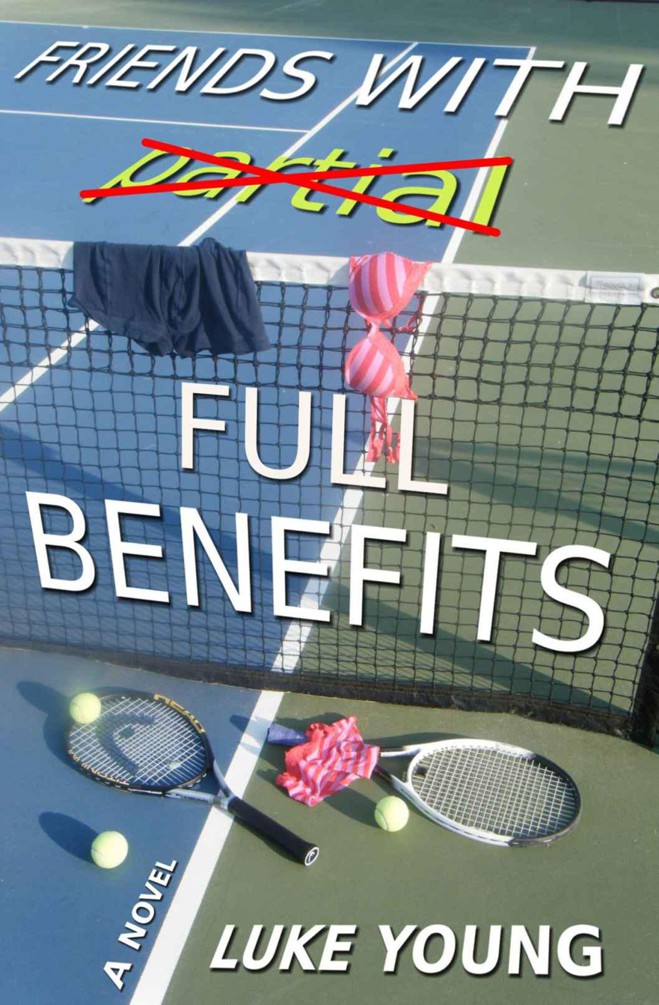 A Friends With... Benefits Novel

This book is a work of fiction. Names, characters, businesses, places, events and incidents are the product of the author’s imagination or are used fictitiously. Any resemblance to actual persons, living or dead is entirely coincidental.

Copyright 2011 by Luke Young. All rights reserved under International and Pan-American Copyright Conventions. By payment of the required fees, you have been granted the non-exclusive, non-transferable right to access and read the text of this e-book on-screen. No part of this text may be reproduced, downloaded, transmitted, reverse engineered, decompiled or stored in or introduced into any information storage and retrieval system, in any form whether electronic or mechanical, now known or hereinafter invented, without the express written permission of Luke Young.

The
Friends With... Benefits Series:

To find out more about the author and his work, see
http://www.lukeyoungbooks.com/

Miami hadn’t seen three straight days of drenching rain in more than a year. But as Brian waited to hold a tennis match with Jillian, with her response to his marriage proposal hanging in the balance, the rain came. It came hard. He was fine with the lack of acceptance of his proposal for the entire first day while they were joking about the match "rain delay;" by the second day he was sure she would have accepted his proposal, but she hadn’t. He didn’t really start to worry until Day Three, when neither of them mentioned the proposal or the match or any of it. Everything else was fine in the relationship—actually, it was perfect otherwise.

Perfect except for that one "little" thing—he’d proposed three nights ago out by the pool, and he still didn’t have an answer. And when she didn’t respond immediately, he’d tried to provide some levity by suggesting they play for it. He was really only joking; he saw it as just a formality. Even if she did happen to beat him when they played, he was sure she would still just say yes. But at 7:00 p.m. on Day Three, he was still waiting. It had stopped raining an hour or so earlier, but the court was still wet. Plus, Jillian's best friend Victoria had invited them over for dinner, and they were just about to walk out the door. He was in a slightly better mood since he’d learned the next day was going to be beautiful—perfect tennis weather. It was to be an unusual day for late June in southern Florida, eighty degrees with low humidity. He was psyched and ready to play.

Brian was behind the wheel of Jillian’s car, and she sat in the passenger seat, holding a perfect-looking chocolate mousse ganache cake in her lap. They had baked it together that morning and not had sex afterward. They always had sex after they cooked together. There was something about being in the kitchen together and the sensuality of the whole cooking process that got her worked up, but not today.

Before pulling out of the driveway, he glanced out the windshield to the sky. "It looks like it’s clearing up."

"Mm-hmm." She gazed out the window, preoccupied.

As they neared Victoria's house, he rolled his eyes and thought,
“Mm-hmm…mm hmm”—that’s it?
Not, “Oh good, we can finally get our big match in”? What the hell is she thinking?

Jillian said, "I shaved my pussy for you today."

"Really?" he replied. Talk about changing the subject—that was the best non sequitur he’d ever heard. The best by far.

"Let’s both get drunk tonight and just have sex; like, amazing sex. We’ll walk home if we have to."

"Okay." He grinned excitedly, thinking that this was really getting good. He had just been promised clean-shaven pussy and drunken, wild sex. His favorite…

"I’m sorry I’ve been such a bitch lately. It’s the rain. It makes me depressed. I think I have a touch of that thing where if you don’t see the sun, you’re in a bad mood. What’s that called again?"

"I don’t know, but I know exactly what you’re talking about."

"That’s why I live in southern Florida. It hardly ever rains here."

He nodded in agreement as he pulled into Victoria’s driveway.

As he opened the door to get out of the car, she put her hand on his arm. "Wait." He met her gaze, and she gave him an uneasy smile. "We’ll play tennis tomorrow. Then…" She gave him a wistful look. "I really want to play you."

"Oh, I know you do. I can’t wait." A big smile spread across his face as they walked to the front door.

Victoria, Brian, and Jillian sat around the table in Victoria’s dining room, enjoying a glass of wine after finishing a delicious meal that Victoria clearly had not prepared, because she never cooked. In fact, her oven was used mainly for storage. Instead, she had the meal delivered from a fine local restaurant.

"The food was amazing." Brian patted his full stomach.

"Yes, it was delicious." Jillian shook her head with a smile.

"It's not easy putting together a meal like this."

After they all shared a laugh, Victoria asked, "You guys feel like sitting by the pool?"

A few minutes later, the women sat on comfortable lounge chairs enjoying the beautiful night, while Brian prepared after-dinner drinks in the house.

Looking at the house directly behind Victoria's, Jillian's eyes widened. "You never mentioned how your date went with your hot neighbor."

"Did you keep your promise?"

Jillian gave her a look. "About not having sex with him on the first date."

"He’s the head coach of the football team."

Victoria nodded with a frown.

"That’s an important job. Does he actually have any free time to date?"

"I think so, but I don’t know." Sighing, Victoria stared down at the concrete patio.

Victoria glanced up at her face. "It's just… I haven’t had sex in over a month, and I’m not sure it’s really going to work out with John and me."

"I think he has a premature ejaculation problem."

Jillian looked confused. "Did he tell you that?"

"Well, he came, like, five seconds after I went down on him. That’s how I know."

Jillian was staring straight ahead, looking confused, when Brian walked out carrying two cosmopolitans. He handed them off to Jillian and Victoria. "I’ll be right back."

"But you said you didn’t have sex," Jillian said.

"We didn’t. He's pretty good at eating pussy, and I really enjoyed that part, but—"

"Let me see if I understand you correctly. He performed oral sex on you?"

"You performed oral sex on him?"

"Okay, it was short, but his penis was in your mouth, right?"

"Right. So what’s your point?"

Looking at Victoria in complete bewilderment, Jillian’s jaw dropped. Brian returned with his own girly drink, placed it on the table, and fell into a comfortable chair. "What the heck are we talking about?"

Jillian made a face. "Do you consider oral sex, sex?"

Victoria folded her arms across her chest. "Well, I don’t."

"Who are you, Bill Clinton?" Brian scoffed.

"If that definition works for a former President, then it works for me."

Turning to Brian, Jillian asked, "Remember when Victoria said that she would not have sex with this new guy on the first date?"

"Well, he performed oral sex on her; then she did it to him, and—"

"Only for five seconds before he shot all over my face and in my hair."

"Yuck." Jillian glared at her as if that little detail was totally unnecessary.

"I had to wash my hair twice, and my eye burned for, like, an hour."

After Jillian and Brian shared a look, he looked back at Victoria. "Only five seconds, you say?"

He widened his eyes. "Well, in that case…"

Victoria looked at him, waiting hopefully for some support. After pondering it for a moment, he nodded. "It’s still sex. You had sex with him."

Dismissively waving her hand at him, Victoria shook her head. "Sex is fucking—penis-in-vagina fucking."

"I went almost a year without having sex once." Jillian announced proudly.

"Eighteen months for me… starting in my junior year, until I met…" He motioned toward Jillian with a couple quick head nods; in response, she grinned like a schoolgirl.

Victoria eyed them both with a condescending smile. "That doesn’t comfort me at all. You guys were kinda like losers in the romance department. No offense."

Jillian sneered her way, then they all took a big sip of their drinks.

After an awkward pause, Brian shifted gears. "So... Victoria, when do classes start?"

"What is it?" Jillian asked.

"It’s called Advanced Sexual Problems. It focuses on case studies of couples whose sex lives are in desperate need of help. I got ahold of the syllabus and found out that I have to do a case study, either on a real life couple or one described in the textbook."

"That sounds a hell of a lot more interesting than those finance classes I had to take," Brian said.