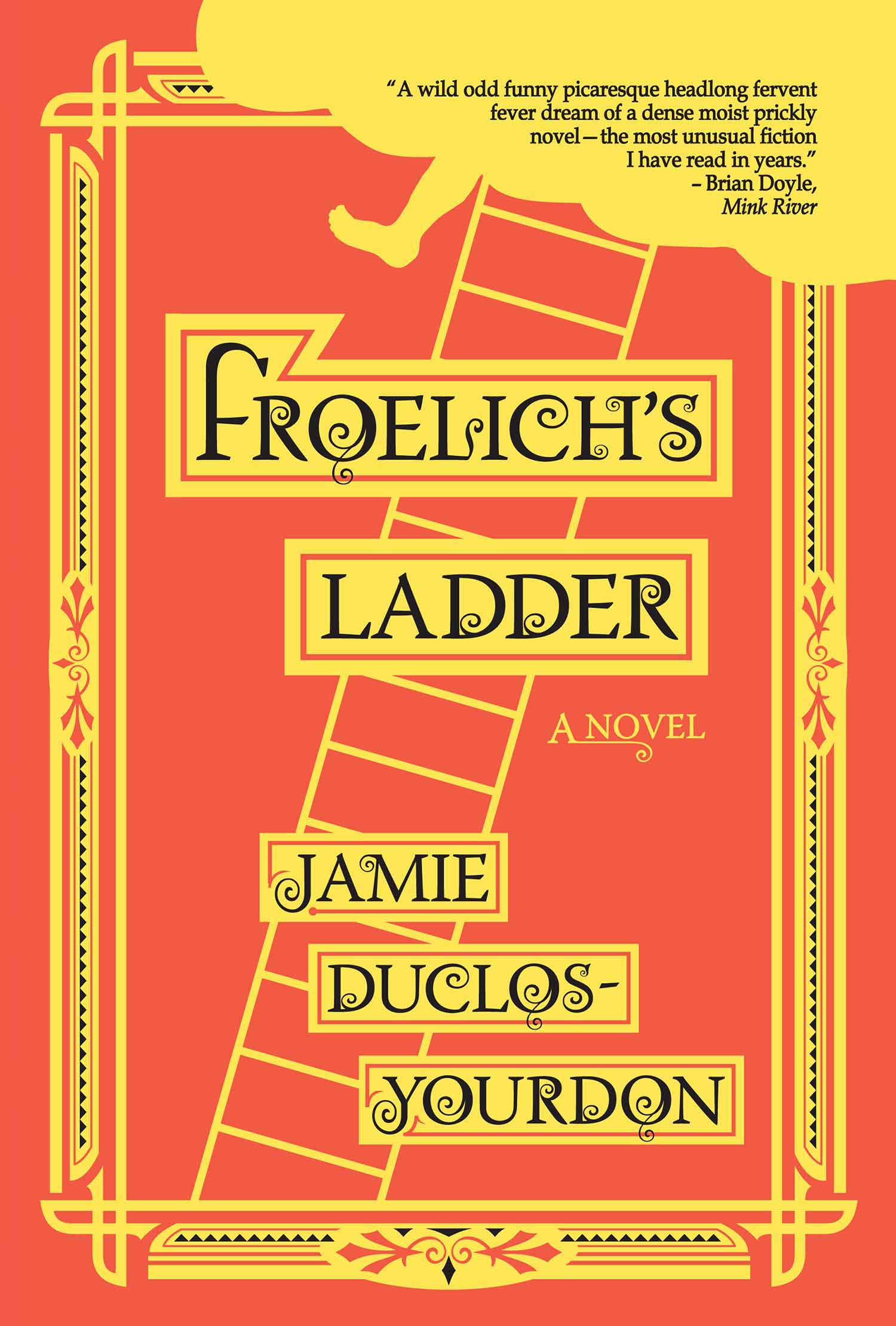 “From the first page to the last,
Froelich’s Ladder

brims with color, intrigue, and verve. At once a fantastical, madcap adventure and a poignant meditation on independence and solitude, it’s the kind of book that captivates you quickly and whisks you high into the atmosphere. I was in thrall to the surreal Oregon landscape, populated by tycoons and grifters, cross-dressers and hungry clouds. This debut is clever, irreverent, and ultimately unforgettable.”

“A wild odd funny picaresque headlong fervent fever dream of a dense moist prickly novel
—
the most unusual fiction I have read in years.”

“Three words: inventive, intrepid, imaginative.
Froelich’s Ladder
blends the best elements of magic and realism, conveying characters and readers alike into the familiar fog-enshrouded world of Oregon where anything but the familiar happens.”

–
Gina Ochsner, author of
The Russian Dreambook of Colour and Flight

and
The Hidden Letters of Velta B.

“
Froelich’s Ladder
is a delight: sneaky, wise, hilarious. In thinking of Jamie Duclos-Yourdon’s spectacular debut, I’m put in mind of another tall tale, Huck Finn, whose title character said of his author, ‘There was things which he stretched, but mainly he told the truth.’
Froelich’s Ladder
tells the truth of America, with astonishing insight, invention, and grace.”

–
Jennifer Finney Boylan, author of
She’s Not There

and
Stuck in the Middle with You

“In
Froelich’s Ladder
, Jamie Duclos-Yourdon debuts an impeccably crafted adventure in the best tall tale tradition. The men and women of his frontier Oregon are keenly drawn and brilliantly, painfully human, as is the book itself, touched with wit and whimsy and saturated with longing. Duclos-Yourdon’s deft, lyrical prose gives the novel an impressive, addictive fairytale sensibility, and marks it as one of those rare reads that simultaneously evokes and transcends its wholly original time and place.”

– Tracy Manaster, author of
You Could Be Home by Now

set in the Oregon Territory and featuring a large cast of eccentric characters. It’s reminiscent of the works of Patrick deWitt, though entirely its own thing. I loved the magic and the tall tale-ness and the characters and I wish there were more books in the world that were creating new folklores and fairy tales. Sometimes we grown-ups need to be reminded of why we started loving stories in the first place, and
Froelich’s Ladder
is a book that can do that.”

”Jamie Duclos-Yourdon’s new novel,
Froelich’s Ladder,
is the perfect tall tale for our time. Funny and smart, Duclos-Yourdon takes us back to just settled Oregon. With logging camps, confederate spies, and industrious builders, this book is at once a lesson in Oregon history and a lesson in the unexpected. Overall, it’s a joy to read; it’s evocative of a different time, and a tale that’s taller than the ladder Froelich builds.”

This is a work of fiction. Any resemblance these characters have to actual persons, living or dead, is entirely coincidental.

All rights reserved. No portion of this publication may be reproduced in any form, with the exception of reviewers quoting short passages, without the written permission of the publisher.

An excerpt from
Froelich’s Ladder
appeared in
Chicago Literati
in December 2014.

Now that my ladder’s gone,

I must lie down where all the ladders start,

In the foul rag-and-bone shop of the heart.

It was November 1851 when Harald and Froelich arrived in Oregon Country. Disembarking at Fort Astoria, they journeyed inland by foot, hiking over the Cascades in a gale that swept off the ocean like an enormous push broom. Above the eastern timberline, precipitation turned to hail—even masquerading as snow for one eerie afternoon, with flakes the size of dinner plates. When they finally descended and the land had leveled off, the air was buoyed by a gentle mist. Here, the hemlock trees were wrapped in wintergreen moss, unlike the whitebark pine they’d passed at higher altitudes, stooped over and rough to the touch.

Statuesque Harald was the picture of contentment, his eyes shut and his nostrils flared; unfortunately, his brother felt less rhapsodic. The third of four sons and heir to none of his family’s fortune (which was comprised of a hog farm in Germany), Froelich had been born with outsized ambitions. He’d set his sights on America—convincing Harald, fourteen months his senior, to join him. But now the soles of Froelich’s feet were soft and wrinkly from threadbare socks in sodden shoes. Loudly he complained, “I feel like an otter. Never in my life have I been so wet.”

The brothers’ land (two plots arranged end-to-end) was adjacent to Boxboro—less of a town at the time than the notion of a town. The previous year, the United States Congress had passed the Donation Land Act. Harald and Froelich, being of voting age and white (by accident of birth, and without conscious design), were entitled to three hundred twenty acres in Oregon Country, provided they make improvements to the land and remain for four years. At nineteen and eighteen years old, respectively, they received no greeting when they arrived, nor did anything but a handwritten mile marker signify their property.

“A bog,” Froelich noisily observed. “It reminds me of a bog, Harald, only without the charm. In California, at least it’s sunny. At least the people were civilized! Did you see that coot at the general store? His mouth looked like the back of your knee! Is it any wonder they’re giving away land? If a person were to come up to you and say, ‘Here, take my daughter—my pride and joy, a vision to see,’ would you think to yourself, ‘Oh lucky day!’ Or would you think, ‘Let me see this daughter of yours.’ Maybe it’s not even his daughter, Harald, but a man dressed as a woman, lying in wait! And when I pay her a visit, with my chin shaved and my hair nicely parted, he jumps out from behind the wardrobe, strikes me over the head, and—”

“Enough, Froelich!” Harald shouted, finally compelled to open his eyes. Staring down at his brother, he asked, “What are you trying to say?”

“What am I trying to say?”
The volume of Froelich’s voice was enough to startle the birds. “I’m saying it’s abysmal here! I’m saying this has been a terrible mistake! No one should suffer such indignity, unless they’re being punished for a grave sin—which, to my knowledge, I am not.”

“But I
like
it here,” Harald said. “I
enjoy
this weather.”

“Don’t be ridiculous,” Froelich snapped. “Go live at the bottom of a well, if that’s your preference. I say California was superior in every way. Or New Orleans—I rather liked the Port of New Orleans. Let’s go back.”

This statement caused Harald’s jaw to swing open, as if on a great hinge. For a moment he was rendered speechless, his face all but frozen, except for a distressed vein that pulsed in his temple. Finally, when it appeared he might’ve been struck dumb, he offered a smile.

“Walk all the way to the Fort Astoria? And how will you, with your feet in that condition?”

Froelich folded his arms and scowled. He’d thought his limp was less noticeable, even as it had grown more and more pronounced. He felt it was cruel for Harald to make light of his affliction. After all, his brother stood head and shoulders above normal men and was strong as a locomotive.

“You’ll have to carry me, of course,” Froelich said.

Harald threw his head back as his laughter turned to howls. The rain dappled his forehead and ran in rivulets down his cheeks.

“Carry you?” he gasped, when he was finally able to speak.

Froelich, who was beginning to lose his patience, confirmed, “Yes—carry me. Don’t pretend for a second that I’m too heavy.”

“Of course you’re not too heavy—I could put a wagon on my back. But why carry you? Why should I leave? This is my home now, Froelich. The contract requires that we stay for four years.”

Now it was Froelich’s turn to gape. The betrayal he felt stemmed less from what Harald wanted, and more from what he
didn’t
want. Harald, with his unique physical gifts, could’ve made a name for himself in Deutschland, when no such option had been available to Froelich.
His
only chance at upward mobility had been to pursue his fortune, and that pursuit had led him to this wilderness.

“Come with me,” Froelich said. “I want to show you something.”

Technically, they were standing on Froelich’s land. Slogging to the middle of an empty pasture, where the drizzle had turned the ground to slurry, he spun around to face his brother.

“There,” Froelich said, pointing at his feet. Rain was dripping down his brow and under his collar, not that he noticed anymore. “Look right there, and tell me what you see.”

“It’s your grave,” Froelich sneered. “Yours and mine, both—but you first, if rank stupidity has anything to do with it. We’ve traveled tens of thousands miles, Harald, and for what? The privilege of drowning while standing up? If that’s the case, I’d rather spend what time remains alone. Oregon Country is big enough that I don’t have to see your idiot face.”

The Daylight War by Peter V. Brett
193356377X-Savage-Shores-Wildes by sirenpublishing.com
Sinful Nights: The Six-Month Marriage\Injured Innocent\Loving by Penny Jordan
Heaven Is Small by Emily Schultz
Probability Sun by Nancy Kress
Lone Wolf by David Archer
On the Ropes 2: Insidious Obsession by Michelle Cary
The Academy by Ridley Pearson
The Bone House by Brian Freeman
The Verruca Bazooka by Jonny Moon