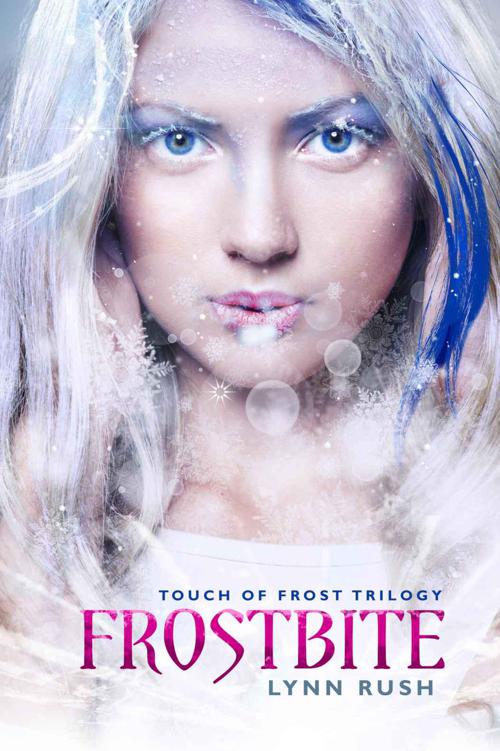 Thank you for buying this ebook, published by Lynn Rush, LLC.

To God, from whom all blessings flow

To my husband, Charlie, for being my happily-ever-after

To Lynn Boeyink, you are missed

To those dealing with cancer—stay strong!

“I
will not freeze anyone today.” I wiggled my fingers. Not that they ever listened to my command, but I had to try something. I’d made it three months at this school without accidentally freezing someone.

Just needed to keep it that way for one more week until graduation.

I clomped out of my bedroom, backpack in tow, chanting my no-freezing-allowed mantra in my head. A steaming travel mug sitting on top of the breakfast bar caught my attention. A note taped to it read:
Morning. I’m in the garage.

Despite his tendency to nag, my big brother had one or two redeeming qualities. I brought the coffee to my nose and flipped the sip-hole open. “Mmm.” Vanilla flavored. My fave
.

I hustled to the door and yanked it open, ready to face another day. Dry, desert air greeted my skin with a gentle caress when I stepped onto the porch. The yard littered with cactus and rocks reminded me of the stark contrast between Arizona and Minnesota. Despite my icy tendencies and ability to withstand extreme cold, I’d rather have the sun shining down and warming me.

I started down the flight of stairs to the sidewalk leading toward the garage still repeating my mantra. A daily ritual, crazy by anyone’s standards but mine, considering I had to work pretty hard to not accidentally freeze something.

Clanking metal and a slew of curse words streamed out from the garage. My trot down the stairs morphed into a mad dash.

The Coats found us again!

My quick motion sent dark liquid splashing through the lid and onto my shirt. Coffee soaked the cotton, scorching my skin. I hurled the cup to the gravel yard.
Please let Scott be okay
. If I had to witness another relative—my last living relative—lying in a pool of blood, dead…I’d crack. Literally crack.

I kicked the side door open, my hand already chilled and ready to freeze anyone who wasn’t my brother. “Scott.” I screamed so loud, razors slicing my throat would have hurt less.

Oh my God. Did they get him?

Scott popped up from behind the car. He lifted his arms in surrender. “Whoa.” His gaze fixed on my hand.

Fanned open and aimed directly at him, my arctic-blue digits shimmered with a layer of frost. Panic squeezed my lungs. Tremors traveled up my legs and vibrated my gut. When I was scared, my power always exploded. Sometimes to the extent that I left a trail of dead people…

The crowbar Scott held clanked to the cement and rang like a tower bell within my skull.

I drew in a stuttered breath and scanned the single-car garage. “Scott? Are you okay? I heard—”

“Pull it back, Mandy. Calm down.” He inched toward me. White puffs of breath leaked from his mouth. “You can do it. Pull it back.”

“I thought—” I swallowed hard. My tongue turned as dry as cotton. I lowered my arm, and my bag slid off my shoulder to the floor. Damn those
Coats
for turning me into a paranoid freak.

More of a freak than I already was.

“I heard a crash and you cursing up a storm. I thought the
Coats
—” My jaw clenched. The mere thought of them triggered my gag reflex. They’d slaughtered my parents four years ago, and I’d been on edge every day since.

The fact that they’d captured me a few times didn’t help with the paranoia either.

I peeked behind me. Our tiny apartment above my brother’s smoothie shop remained dark and quiet. No jerks dressed in white doctor-type outfits or army fatigues stomping around, shooting their pointy little tranquilizer darts.

It’d been a while since we’d seen them, but I wouldn’t ever relax. How could I? They’d been chasing us for so long. And we’d had more close calls with them than I’d like to remember.

Thank God. I couldn’t lose Scott. Couldn’t see him hurt again. “What’s going on? I almost turned you into an ice sculpture.”

“I’d make a totally hot sculpture though, right?” He fingered his chestnut curls. “Can you turn down the cold first? It’s freezing in here.”

“Well, whose fault is that? You can’t go around cussing and clanging metal together, I thought someone was attacking you again.” Besides, I didn’t particularly feel like killing anyone this morning.

I shook out my hands.
Back off.
I didn’t have a great way of getting this ice-thing under control, so telling it to settle down seemed to work for now. If only I knew how this happened to me.

And why the hell didn’t Scott have any powers if Mom had this, too?

“Good job. I can feel it warming up.” If Scott’s indigo eyes got any bigger, they’d pop out of their sockets. “I’m sorry, Mandy. I didn’t mean to scare you.”

My heart finally slowed to a jog. I felt like I’d sprinted a marathon in record time. The thought of Scott getting hurt by those crazy scientists totally freaked me out. Although he told lame jokes and was kind of a nerd, he was all I had left.

I had to keep him safe. He was in danger because of me. Not to mention he was pretty wimpy.

“What the heck are you doing in here?”

He gestured his blackened thumb to the car. “Flat tire.”

“Must have a slow leak.”

I shuffled to the rear of the car, and the scent of rubber, grease and gasoline sent my nose tingling. “I’ll give you a hand. We have to hurry. Principal Nimrod will be ticked if I’m late again.”

“Don’t call him that.” Scott snatched his crowbar. “He could keep you from graduating.”

Whatever.
I curled my fingers around the hitch connection. “Here?”

I pulled, and the metal groaned under my grip. The end of the Mustang rose. Scott squatted beside the rear wheel and went to work on whatever he was doing to the tire.

“Much better than that jack. I couldn’t get it to work.” He winked at me. “You’re kind of handy to have around.”

“You’re good at other things, too. Don’t forget the new fridge you carried up to the kitchen last weekend.”

But there were no pictures allowed in our lives. Couldn’t afford to leave any trails. I so despised this nomadic lifestyle.

I blew the dust off the trunk of the classic car. “At least we’re not on the side of the road for Toni to see this and ruin everything for us.”

“True. I’m thinking we chose the right town this time. That we’ve finally found a place to settle down.”

“Really? No more
Coats?
” Settling down sure had its appeal, but I didn’t dare get my hopes up. Been there, done that. Totally crushed.

Scott nodded. “It’s been a long time since we’ve seen a
Coat
. I think we’ve finally lost them.”

I didn’t share his optimism, but I kept that to myself. Skepticism became my middle name four years ago when my parents were slaughtered and all this running-shit started. I wasn’t sure it’d ever change.

But having to kill people to stay alive since age fourteen kind of did that to a person.

“And, only one more week until graduation—if you stay out of trouble.”

He stopped cranking whatever tool he was using to fasten the wheel to the car and looked up. “Right?”

I stood straight. “Um—Right.” Staying out of trouble was a challenge for me, though. Sometimes it found me…all by itself.

“We’ve been here three months and you’ve been in trouble two of those.”

Another thing I wasn’t convinced of—why did I need a high school degree? I was doomed to be on the run forever, it wasn’t like I could ever go to college, have a boyfriend, or hold a job.

At least I had Georgia. She kept me in line.
Mostly.

And she scored ten-times higher on the best friend scale than anyone ever had. Then again, being my friend wasn’t such a safe thing—for either of us.

M
s. Stevens scrunched up her button-nosed face as I strolled into the detention room. “Amanda. Not again.”

“Didn’t want you to get lonely.” A smile tugged at my lips.

No one else sat in the classroom. Good. Less interaction with people meant less chance of my powers going wonky and freezing off a body part of some poor, unsuspecting student.

I will not freeze anyone today.

Ms. Stevens shook her head. She reminded me of my mom when she did that. It was a bitter-sweet thing, though. It gave me a sense of familiarity, yet hacked my heart open with a dull knife.

“What am I going to do with you, young lady?”

“Not much to do. This is about as good as it’s gonna get for me.” Total truth. I only needed to continue evading the
Coats
so I could graduate without freezing anyone or anything important.

She looked past me to Principal Nimrod who’d so courteously escorted me here. “Just lunch detention?”

“Next class, too. She’s been excused from P.E. again. She’s better off in here with you than sitting in the gym.” He strode out of the room.

Gym class was by far the hardest place for me to control my powers. Scott had mastered dreaming up excuses to get me out of that class. It’d become an art form, really.

I blamed Zach Landry for my control issues in gym. His statuesque presence sent my hormones into overdrive, which often led to unexplained room temperature drops and icicles on my fingertips.

That got interesting during the swim unit.

It should be illegal to look as good as he did. And from what I could tell by watching him from afar, he was pretty cool. Not a conceited jerk like most guys that hot were. I’d almost wished he was a jerk, though. It’d be easier to not think about him. Instead, he starred in most of my hottest dreams.

That was the only place I ever dated, too. My dreams. Considering I might freeze something important on a guy’s body, I stayed away. Tried that a few times…so not worth the stress it caused. All I needed was an incident in a tabloid that mentioned some chick freezing off a guy’s lips…that’d attract some
Coats
for sure.

But the fact someone like Zach existed made me realize how much I wanted a normal life.